I follow the on Meryl and Me Hit the Road blog.  I read an article there today and thought some of the tech details would be worth talking about.  The article discusses the charging system[s] for the RoadTrek’s new house battery bank.

This sounds like a dual voltage sensing relay (VSR).  Such a relay “senses” when either side has power to share and then connects the starter and house batteries.   The VSR is powered by the starter battery and is always “on” watching the voltage on both sides.

[A normal isolator (constant-duty solenoid) on the other hand gets power from the ignition wire so it is only “on” when the key is turned on. ]

Let’s unpack the quoted paragraph a bit; there’s a lot going on.

when the engine is running

The engine probably doesn’t have to be running to trigger the connection from the starter side – all it takes is a high enough voltage (typically >=~13.4v). Example:  Imagine you had a garage battery charger hooked up to the starter battery; the engine would not be running but the isolator/relay would see sufficient voltage to tie the banks together.

and the RV batteries need to be charged

In general, VSRs do not look to see if the other side needs charging;  they just see sufficient voltage on one side and tie the banks together.  I don’t know which unit we are talking about here, so maybe it does that. 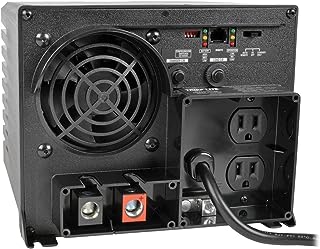 In this case, onboard the Class B is a nice converter/charger/inverter unit, a Tripplite APS750.   When plugged into shore power it begins smart/multistage charging of the house battery.  When the VSR sees the appropriate voltage on that side it connects the two sides.

Keep these values in mind for later; they are in the ballpark where charging voltage is concerned (see below).

I asked if they could get Lifeline batteries - and they said yes but they could not tell me a price...

Lifelines (GPL-4CT in this case) are top-shelf AGM and are priced accordingly.  If properly cared for they will deliver more cycles for the dollar over their lifetime.  The most important factor in proper care is fully charging the batteries regularly.  Every day is preferable but there is some evidence that even 1-2x/week helps delay battery murder due to chronic undercharging.

The charging guidelines from the manufacturer (pdf) are:

The Tripplite mentioned previously is pretty close to these voltage setpoints in either mode.  Hard to go wrong.  But with alternator charging:

the [isolator] does not connect to charge the RV batteries if they are over 12.8 volts.

I hope that is not the case.  A 13.8v high voltage disconnect would be more reasonable if such a disconnect is needed at all.

They do not need to be charged and the engine does not charge them.

Unfortunately that’s not the case.  Lifeline’s charging info tells us that 12.8v isn’t anywhere close to the voltage required to fully charge the batteries.

Yes, there are DC-DC (B2B) isolators that will boost alternator output to the voltages required for full charging.   If owners are driving a continuous 2-4hrs a couple of times a week it would meet charging criteria.  If not, the increased voltage would slow the murder process.  Lifeline puts it this way:  “If the recharge is insufficient, the battery’s state of charge will gradually “walk down” as it is cycled, resulting in sulfation and premature failure.”  I suspect they mean capacity will walk down instead of state of charge, but maybe my understanding isn’t sufficient to understand the nuance.

If the batteries are 12.8 volts or above the C charge indicator LED will remain lit - even though no charging is taking place

Dunno about this one.  If I had to guess I’d say we are judging that no charging is taking place because house battery voltage is not increasing.   With lead-acid batteries after the charging voltage levels off the battery will absorb/accept ever-decreasing current until it doesn’t want any more.  It’s the same phenomenon that occurs in Absorption.

If we are judging by absence of relay clicking I have no idea.  :-)

I take it that the author spends more time in campgrounds with hookups rather than boondocking.  If this is the case the lovely new Lifeline bank will get charged properly from shore power and the Tripplite converter.  I’d rather see it charged at 45A instead of 20A – the minimum charge rate for AGM batts is typically C/5.  (220Ah/5 = 44A minimum).  20A charging would be sufficient for flooded lead-acid banks that only require a C/10 minimum (220Ah/10 = 22A).

If the author plans to boondock and charge by alternator only I fear the $$$ battery’s lifespan will be significantly shortened.  Excellent batteries are as easy to kill as cheap ones.