I have been remiss; the full name of the NM is as above.

The mounted array is doing fine, but the cloudy days in the forecast, proximity to winter solstice, and being stationary for 14d encouraged me to set out the portables.

I have the controller for the portables set a bit more conservatively than the main controller, so in effect the portables only contribute signficantly during Bulk or when loads when nontrivial loads are added. Yesterday when it was cloudy they contributed 0.42kWh. Right now it’s sunny and although I am running ~380w of loads (including a tiny space heater!) the main array is handling it fine. The portables are effectively idling at 3.08w.

One of the downsides of having mountains to the east is that it delays morning solar harvest. This pic was taken at 0729 this morning while Muffin and I walked the cattle trail: 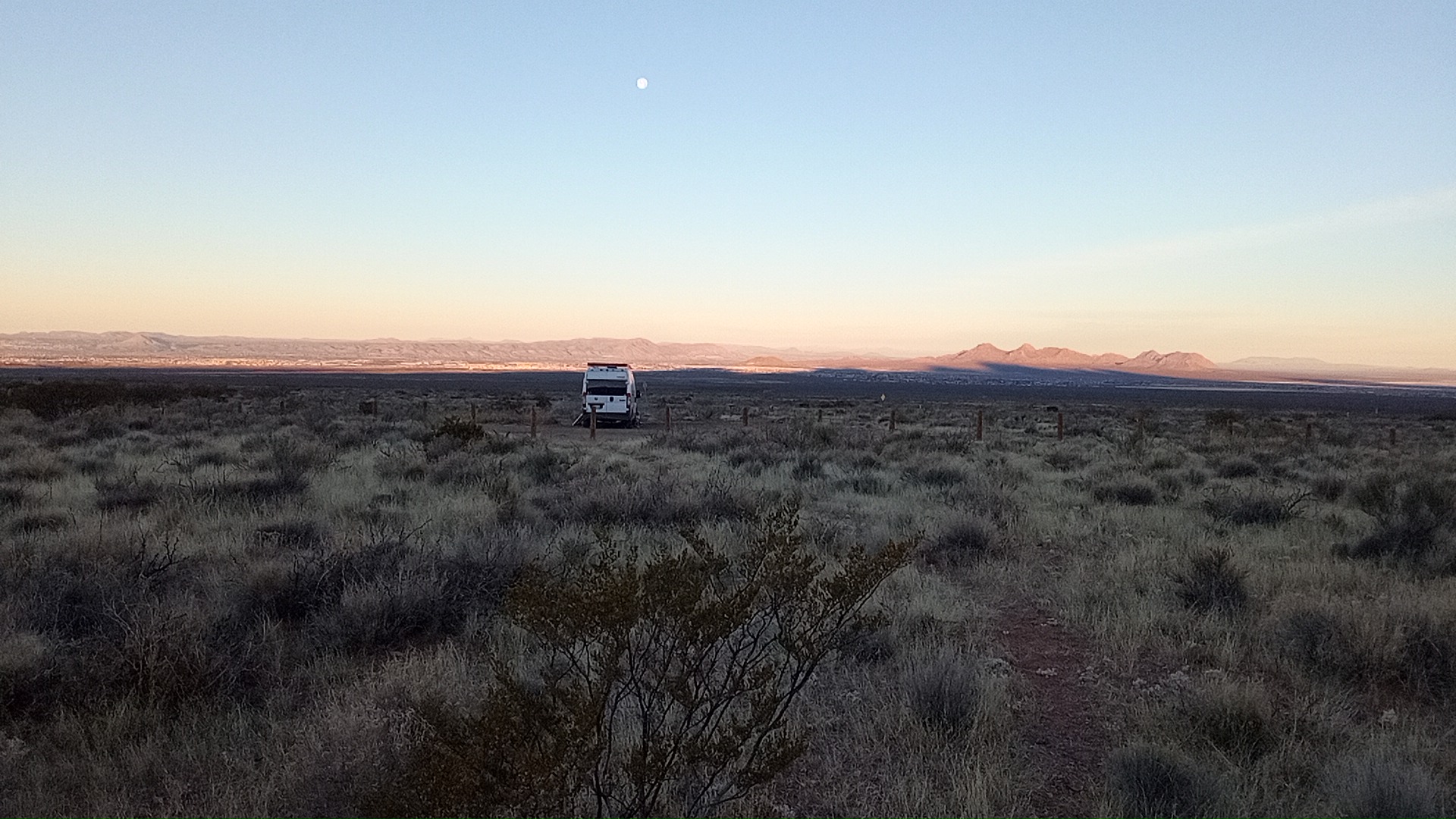 The van is completely shaded, and the shade goes about halfway through Las Cruces in the distance. By 0753 the sun had emerged from behind the mountains and the van was in full (albeit weak morning) sun.

The delay in this instance isn’t that bad; due to low sun that time of the morning there’s really not much power to be harvested anyway.

The other day I took this pic standing behind the van: 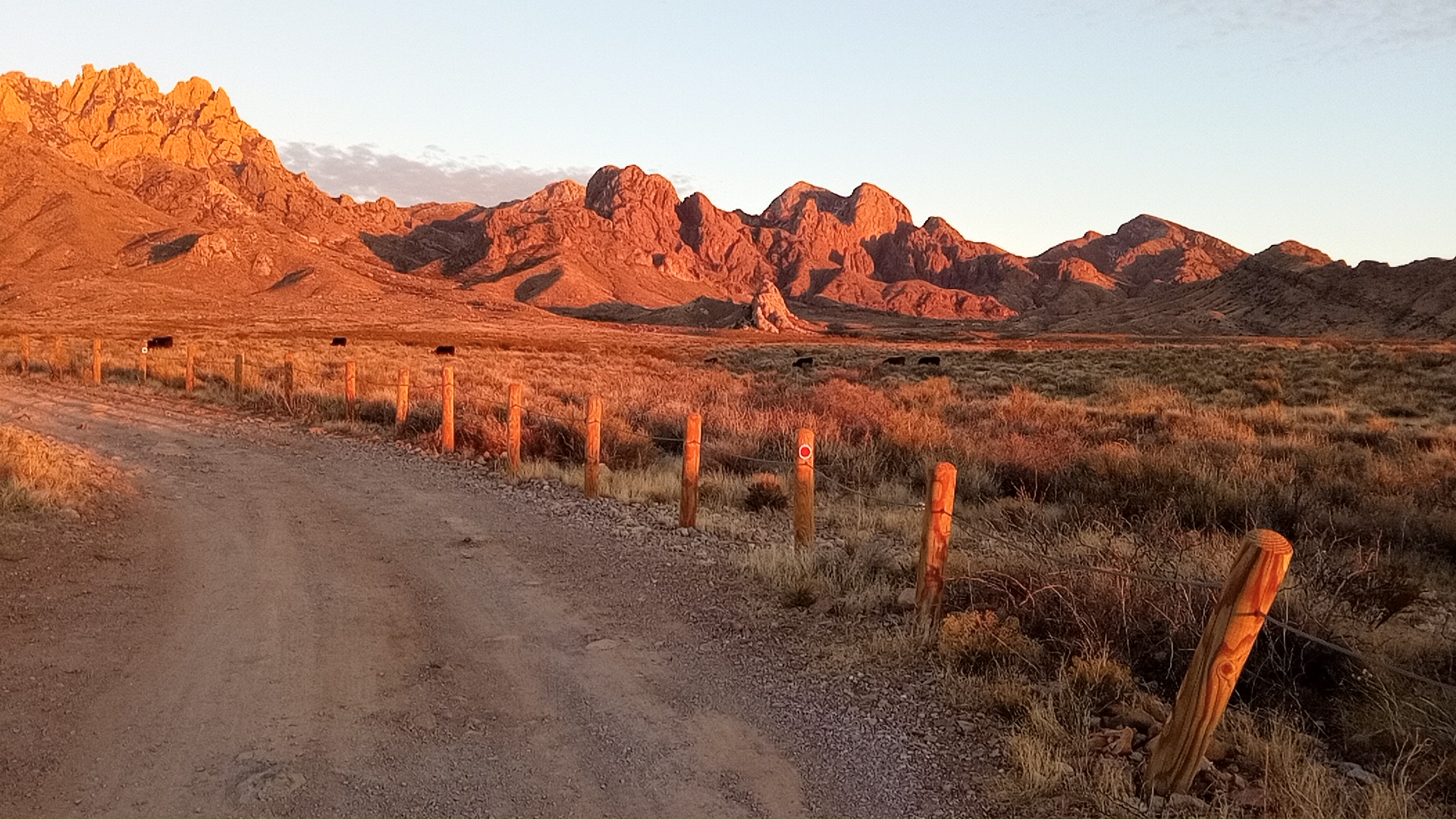 because there were some black Angus (?) ranging on the far side of the vehicle barrier.

If the camera were turned left we’d see the van. I mention this because…

Muffin was woo-wooing outside after her breakfast so I stepped out to see what was going on. There was a coyote just on the other side of the fence, ~20ft away. I imagine it was looking for scraps left by campers.

He looked very healthy and strong, about as big as her but I figure part of that is a heavy winter coat.

I usually start a new minecraft world at each campsite. This one is “202201lascruces” because I am so clever and original.

I have enough seat time with Minecraft that I don’t die very often in it. I often play Hardcore mode where there is no restarting. Good thing I played Normal mode this time because I got killed 2x within a few minutes. Monsters usually aren’t a problem until the first nightfall when the dark brings them out. I didn’t realize drowned zombies underwater were an exception. Due to low light levels underwater, I guess.

I finally got to the cherry spot on the lakeshore I was trying to reach and established a survival garden (first pic). It’s dicey until because one can die of hunger. After another day or so the garden was producing well and I had a mob grinder set up for loot and XP (second pic, spawner in air and home base on water’s edge).

After I had some armor I went looking around and found a mesa biome (third pic), the first I’ve seen. Kind of a painted desert effect. Over in that area I found some wolves and was able to domesticate two of them by giving them skeleton bones. They followed me home and I put them in a kennel for containment and breeding (fourth pic). There is a wolf pup partially visible against the fence.

There is a windmill in the distance that I’ve seen running before but this time the windcock tail (?) is tied at 90deg to prevent operation. Dog and I walked there to see what was going on. 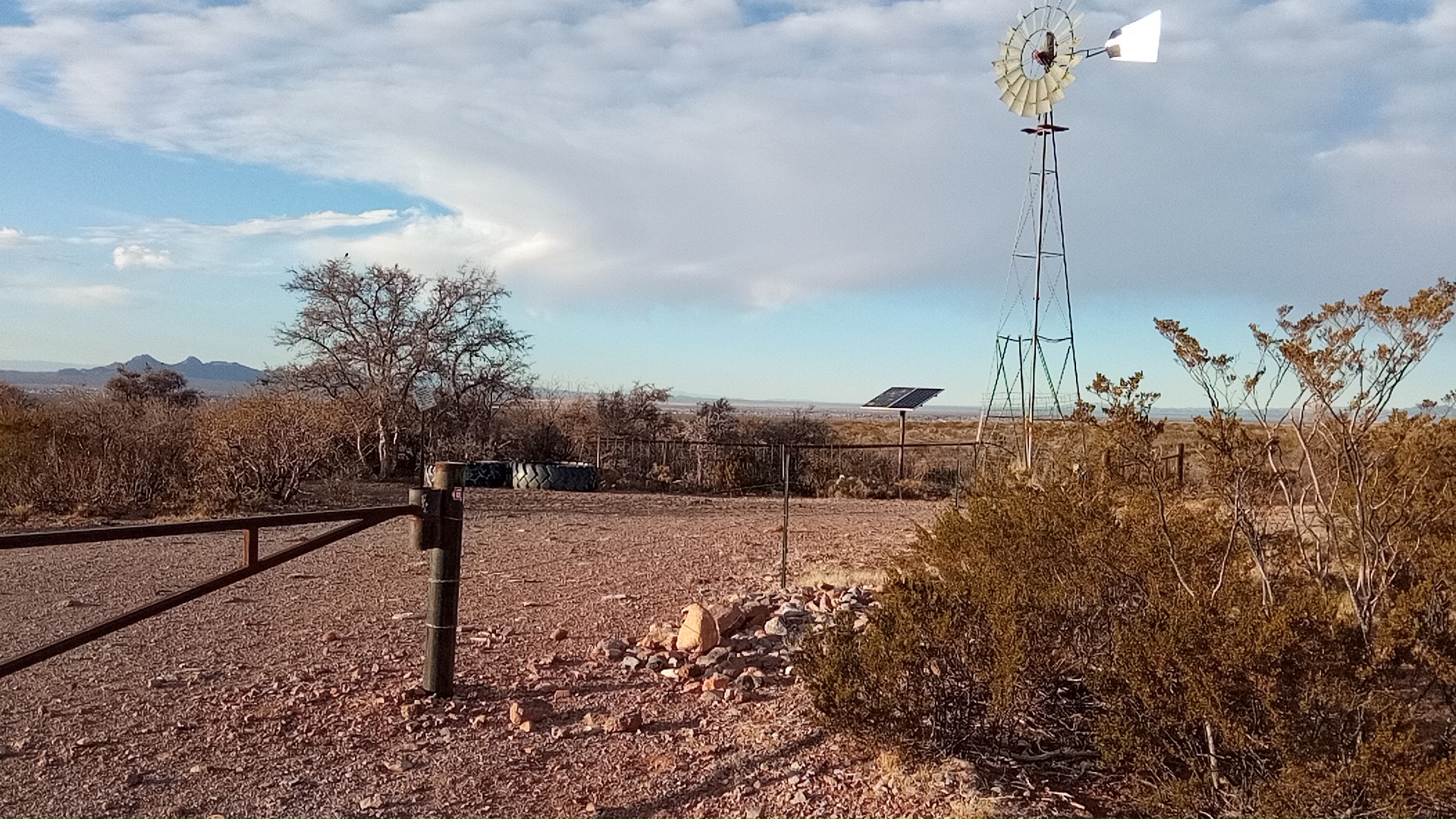 The windmill is disabled since there is now a solar panel onsite. The black PVC pipe is aboveground and can be seen running from the windmill on the right to the rightmost tire. Water is steadily pouring from the pipe into the tire at maybe 1.5gpm. Weird.

At first I assumed the tire was protective to keep cattle from pushing against a round watering trough. Turns out the tire probably is the tank:

The Classic Tire Tank is an open-top mining tire that comes with the bottom bead (or hub) open as well. It is usually placed over the inlet pipe and optional overflow pipe, then sealed by the customer using QuickCrete. – source

2022 according to google / waypoint maintenance