Swamp coolers (“evaporative coolers”) work great in deserts and other areas of very low humidity. Before I retired and started following mild weather I was stealth camping in El Paso year-‘round. I’d typically run the evap cooler when temps climbed into the 80F range, and my experience with the cooler blowing on me was:

Evap coolers require about 1/10th the amount of energy of A/C but they still do pull power. If you have solar the amount of power they pull in the daytime might not be that important, but the lower fan speed power use might be important for those who sleep in hot areas. Power levels vary but you might budget 60w for max power consumption for an evap cooler that would fit easily in a van.

Because of the presence of electronic controls on many and electric fan motors on all, I run mine on a small pure sine wave inverter. I use a bigger, inexpensive MSW for resistive loads like the hotplate and crockpot.

In my experience a van-sized swamp cooler consumes between a half-gallon/day (light intermittent use on low fan settings) to 4 gallons/day (running all the time on highest fan speed). Because of the water consumption I consider evaporative cooling to help me stay comfortable when there is a short-term temperature spike. If it’s going to be hot for more than a couple days I relocate.

The evaporative pads need to be replaced from time to time (annually?). Depending on design you may be able to “roll your own” for cheap from pad material. When not in use they should probably be removed and allowed to dry in sunlight to kill any incipient microflora.
A removable water tank is desirable both for cleaning and to dump the water if you need to for some reason.

These coolers are intended to sit on the floor in a house and often have rollers. I remove the rollers but they still have to be strapped down before relocating the vehicle. In the past I have forgotten to do this and they have fallen off the galley, always landing on their heads with the water tank drowning the electronics. I now have unit with a grabhandle that allows me to strap the unit securely.

Because I am forgetful and destroyed a few, I have a range of experience that might be helpful to onlookers.

units I have owned

The space I have under the overhead storage is 26” tall. I usually remember this but failed to in the case of the Costway below.

My favorite so far is the Honeywell CS071AE due to excellent performance, more fan speeds, and low power consumption at all fan levels. 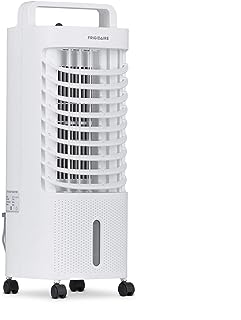 My current evap is a Frigidaire FEC180WH00, selected because my preferred Honeywell was unavailable when I needed it.

The main benefit of this unit is the grabhandle top that makes for easy securing – I strapped it to the overhead shelves and it stays put.

Cooling performance is not as good as the Honeywell above. I measured output with a temp gun on both units side by side (using a friend’s Honeywell) and the Honey was 5-6F cooler. The physics and CFM are the same so I suspect the pad or watering design isn’t as good on the Frididaire. The pad does appear to be fully wetted, so I may try to make a DIY a pad to see if it makes a difference.

I don’t remember much about the Costway 23665-CYPE except that at 29” it was too tall to fit under the overhead shelving – my mistake. Couldn’t put it against the wall so it was difficult to secure and I quickly broke it. :-(