Electric space heating is a beat-down offgrid, typically requiring over 1000w for small space heaters. Contact heating, on the other hand uses relatively little power and can be extremely effective.

Electrical heating devices don’t consume power the way we might expect or want. Consider a 60w blanket with three settings (HI, MED, LO. We might expect:

Luckily the heating elements have some amount of thermal inertia and a person normally can’t feel the ON/OFF cycles. It does require observation and math skills or a watt-measuring device to get good averages. The electronic logic controlling these cycles probably requires a pure sine wave inverter. Older resistor-type controllers will work on MSW.

I use a kill-a-watt meter to measure power consumption over time.

Giantex electric heated mattress pad. Mattress pads tend to need less power than electric blankets because the body is pressing down on the heating wires.

Nitpick: it defaults to 8 when you turn it on, perhaps for preheating. 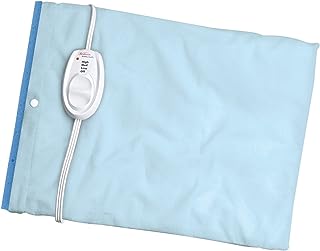 At $15 the Sunbeam heating pad is a great value.

Nitpick: 10w is a good power level, but the pad is so small it’s highly concentrated. I have to put a towel over it for comfort.

For light use I will recommend the Dr. Prepare heated vest which does an astounding job for 10w.

Nitpick: the USB wiring seems a bit flimsy and I worry it will break if I use it too much.

The Karacel rechargeable USB handwarmer was the biggest surprise of the lot. It claims to be a handwarmer adn a USB power brick and I assume it would be terrible at both. Instead, it’s good at both.

I wear it on a lanyard around my neck on LO and use my jacket zipper to regulate heat level. It gets so hot I can’t imagine anyone using it on HI unless they were in the Arctic.

This Sunbeam mattress pad was a failure for offgrid use. The first one was DOA; Amazon quickly shipped another.

The bigger issue was that this 180w-rated device usually pulled in the mid-200s when turned on, and frequently shut down my 300w inverter. Fine for a house, not fine for off-grid. I donated it to a Goodwill store.

The Wagan heated seat cover worked well enough, but felt flimsy like it could break at any time. I laid it out flat under my sleeping bag and it was comfortable on LO (~20w).