I got the 2nd Moderna vaccine shot 9am Monday at the main VA hospital in ELP.   I didn’t know if I’d have a reaction, so I wanted to start moving to slightly cooler temps in advance.

The move wouldn’t have been so time-sensitive but I broke my swamp cooler by inattention.  I had it strapped down but apparently not sufficiently.  I clipped a curb with the rear tire on an acute turn, bounced, and dislodged the cooler from its perch.  Of course it landed upside down and dumped 2gal of water into the electronics in it’s head, shorting/destroying it and causing the inverter to scream.  Yay.

Additional joy:  it’s too large to deliver to amazon counters so I have no way to reorder – I’d delivered to the mail forwarder when I was in ELP a month ago.

Speaking of the forwarder, I stopped in to grab my stored packages (including materials for dogbowl oven experiments.  One of the items was an open-package battery selector switch.  Normally these would feed two batteries from the alternator, but my plan is to feed the solar input of my 10A MPPT from either

I haven’t used the converter since I went FT but I’d like to have the functionality ready in advance in case I need it.

The open-box switch came in and the previous owner had left an ominous message on the back of the hang-tag: 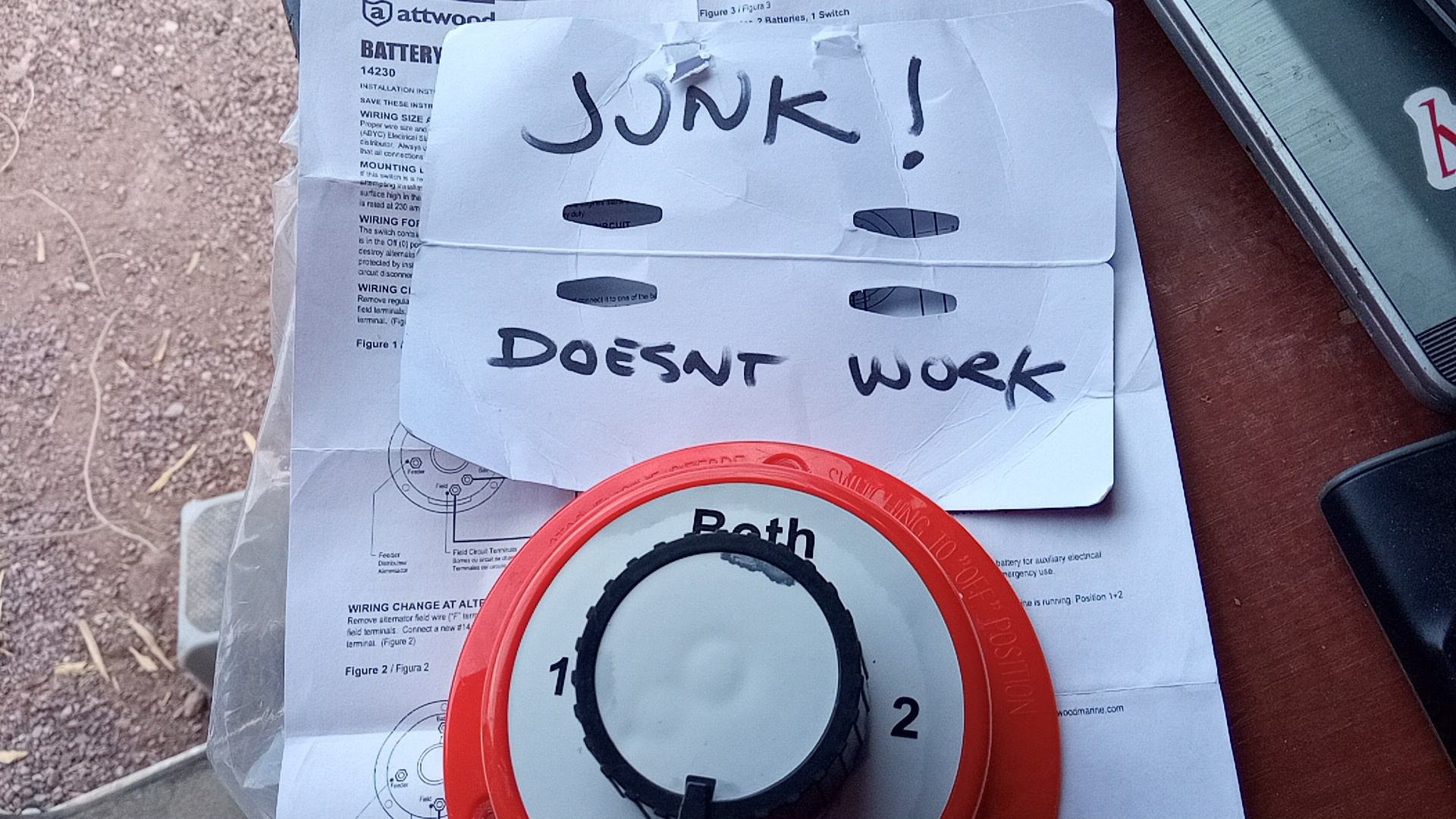 I’ve never had a bad Amazon Warehouse deal before but this one could be problematic.  On the upside, people who habitually use the word “junk” are (in my experience) poor judges of  quality and tend to be (how shall we put this?) part of the problem.  Based on word choice and missing apostrophe I hoped that the person simply didn’t know how the item worked and was lashing out.

I broke out the multimeter and the switch worked as expected in all four positions.  Quelle surprise.

The Box BLM in Socorro, NM

The Box was a few hours up the road and was reported to be pretty and have usable Verizon signal.    I got there and it was pretty: 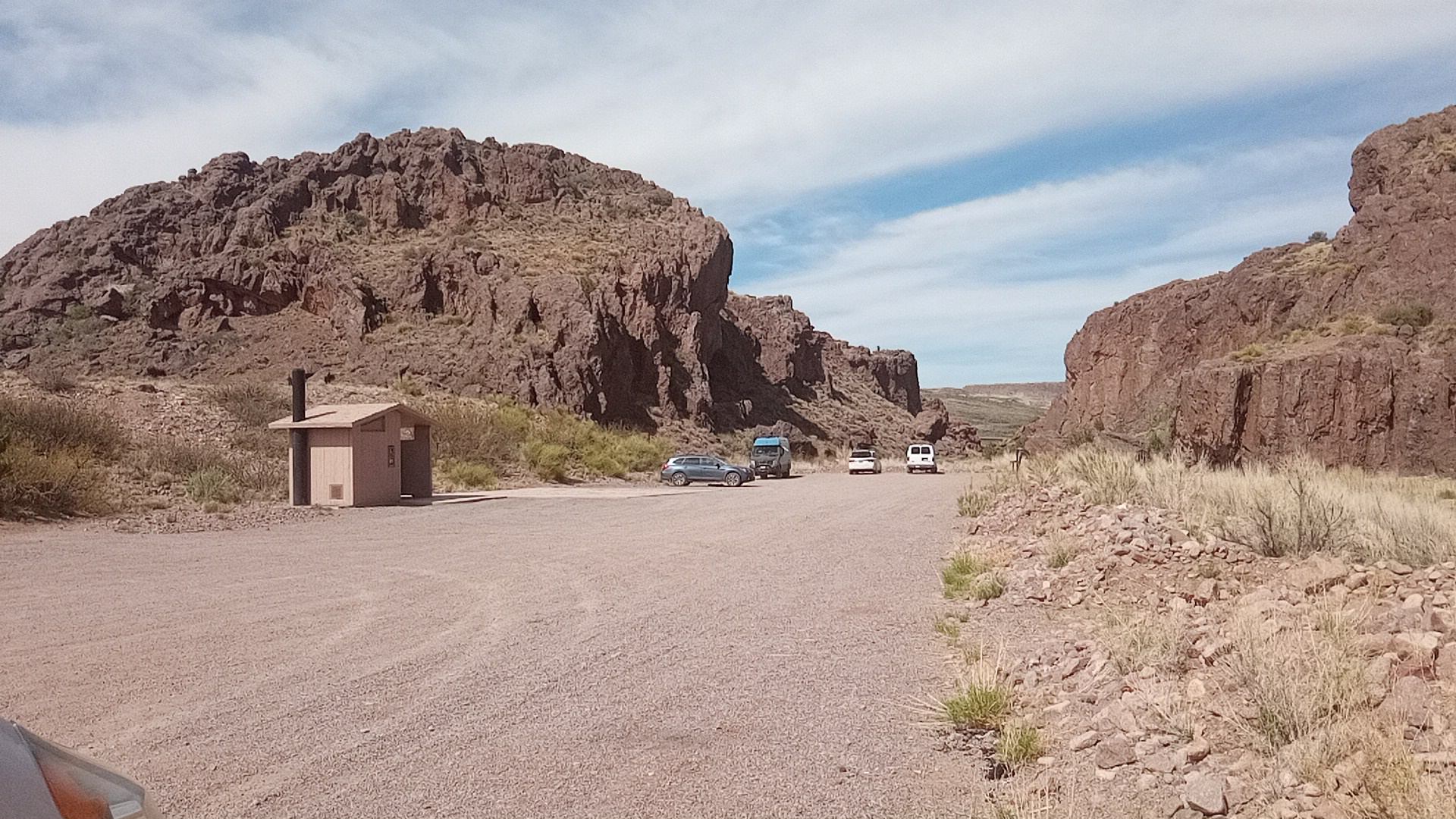 To compound the problem, since I had no signal I didn’t know Water Canyon BLM was further down the road where some have reported signal.   I was exhausted, whether from the drive or the shot and decided to bed down.    I dragged my fatigued butt up a hill where I could get a half-bar of ATT and sent out lat/long and “vaccine hasn’t killed me yet” messages to DC and to my daughter then walked back down into the black hole for the night.

I drove into town (Socorro) this morning to get a signal and plan a spot with bearable weather and a V signal.  I thought about hopping up to the NF northeast of Albuquerque but it shows a high in the 40s and snow.  Nope!

In the end I went a few miles up the road to Chamizal.

This is an odd spot.  There are nice mountains in the distance, but the two-track off the main graded are treacherous with deep sand.   Power lines cut through.  It’s about 100yds (!) from Highway 25 but for some reason I rarely hear traffic noise.  Verizon signal is good.

I’ll likely stay here through Thursday.  The weather at ~5000ft will hold through Friday…

…but I’d rather get my next spot on a Thursday rather than a Friday when I might have to compete with weekenders.

Since it will be relatively warm here (used a fan much of last night) I will start another no-knead loaf this afternoon and cook it tomorrow.  If that fails to rise substantially I will start a white loaf that afternoon.