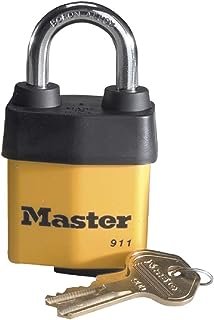 DC spotted the yellow Master 911 padlock in a vise and wanted to know WTH that was about. A reasonable question.

I told her I was trying to pick it for a /r/lockpicking green belt (“higher quality locks with even more security pins”). So far the lock has eluded me, which I suppose is the express purpose of the security pins. This padlock has spools, pins which are wider on the ends and thinner in the middle like a dumbbell. I can feel the typical spooly counter-rotation on the tensioner (a spool will “push back” on the prybar when sliding up onto the thicker end) but can’t get it yet.

DC wanted to try so I handed her a medium tensioner, short “hook” pick, and the cutaway 6-pin lock (pic). It’s a real KIK-style lock (key-in-knob form factor) that has been ground down so you can watch the pin action while you lean what tactile feedback goes with what pin movement.

She conquered the cutaway that evening and wanted more. So we wouldn’t have to wrestle over gear I ordered some SouthOrd tools of her own off LockPickShop: 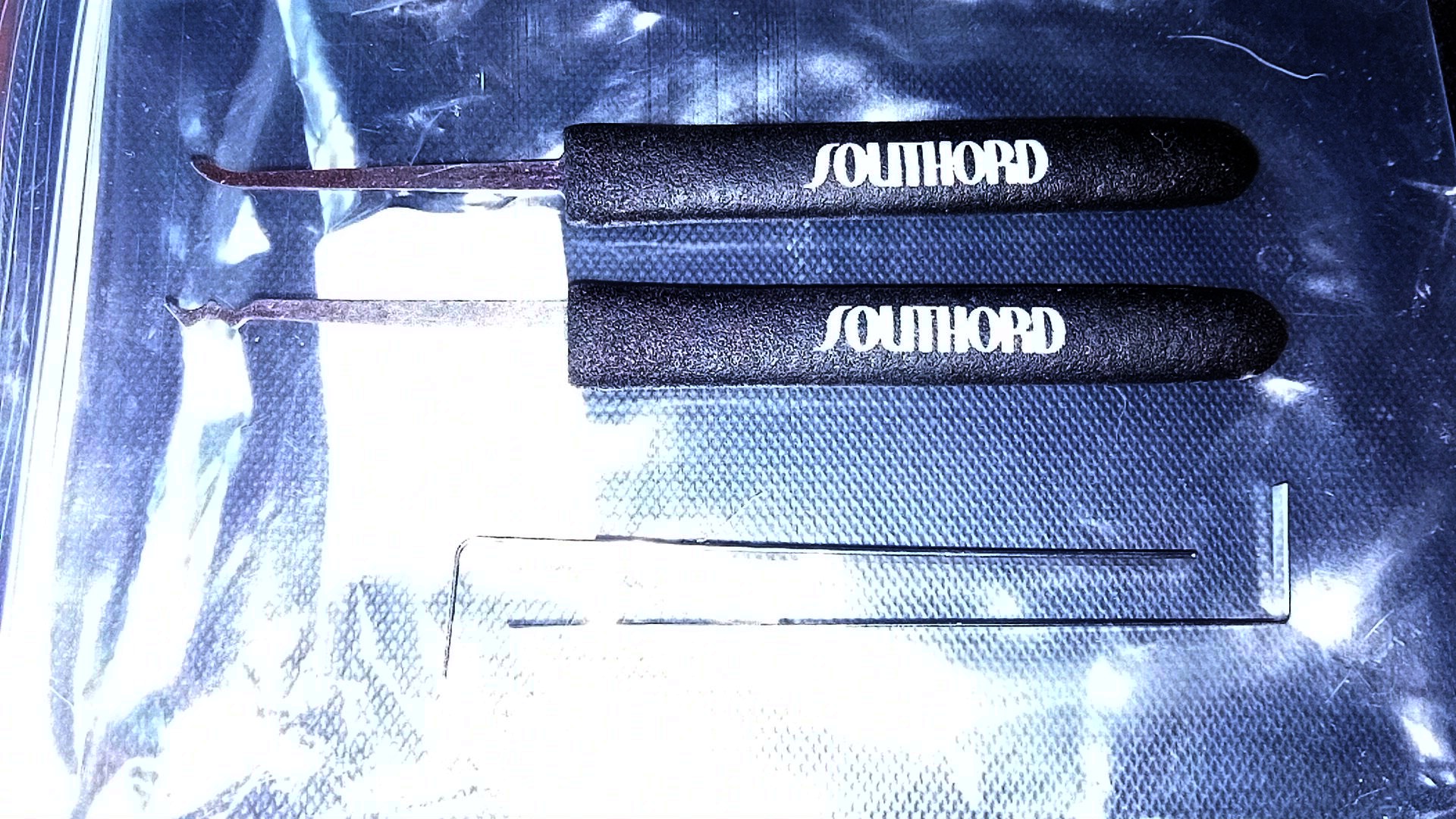 When we meet up I’ll hand them over and turn her loose. Since I was paying shipping already I threw in a thinner (.018”) southord short hook, Peterson Gem and hook #1 for myself. To save money I got the plastic-handled Petes for $4/ea instead of $8/ea.

While I was in ELP I stopped at a thrift store and snagged a Chinese 40mm laminated steel padlock with no key for $0.40. It’s common for padlocks with lost keys to go for a song since it’s not much use to Normal People. I brushed the dirt off, dropped some lock lube in the keyway and gave it a spin to make sure it was functional and could be picked – I didn’t want to frustrate her with a busted lock.* 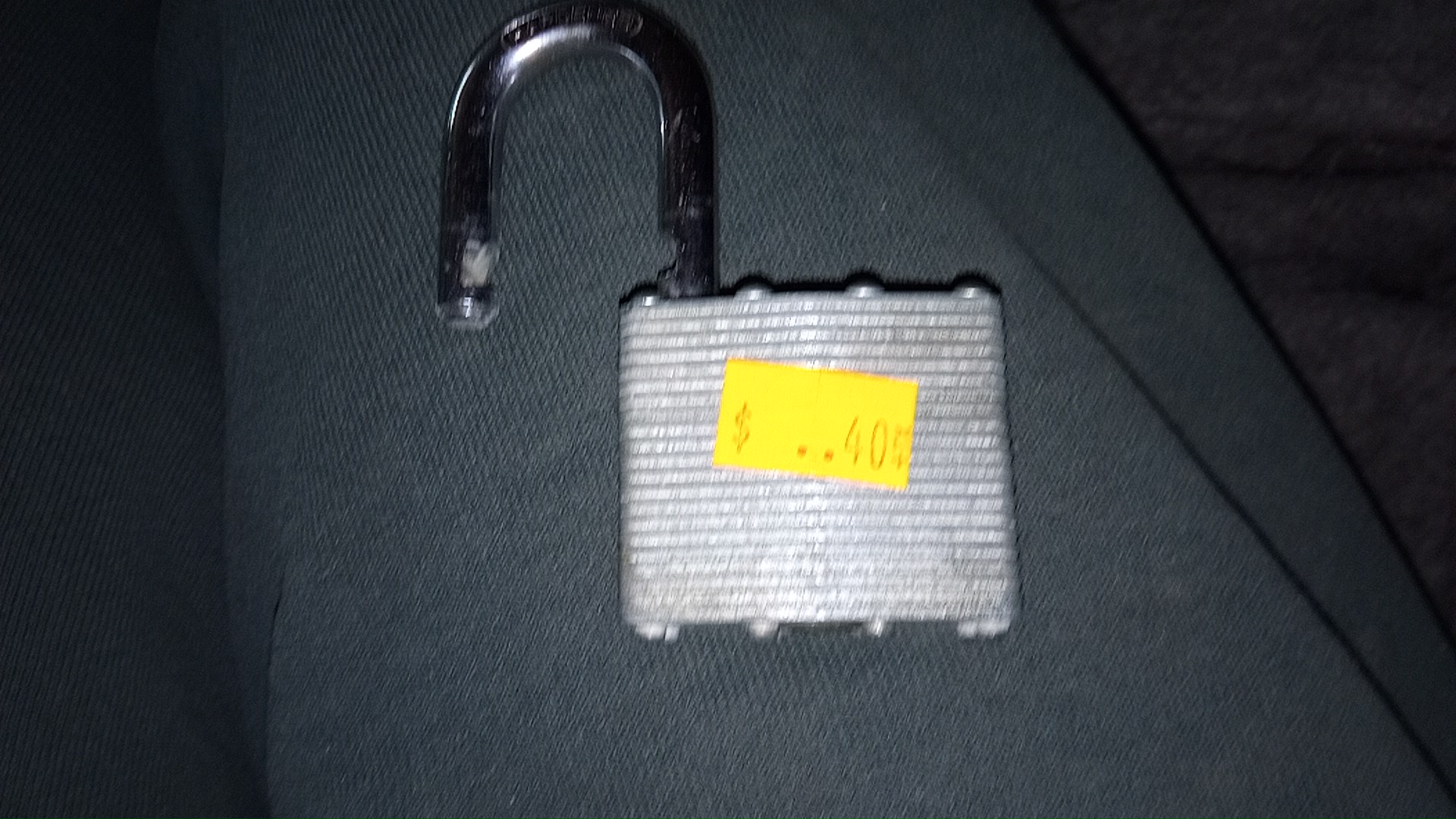 It was kinda stiff/crunchy. I suspect I had it picked a few times and didn’t know it, since I could hear a bunch of pins dropping when I released tension to reset. Next time I increased tension and the slug turned and the hasp popped.

Since the cutaway can be repinned with spools or other security pins I’ll let her catch up a bit then repin with spools for us to learn on. 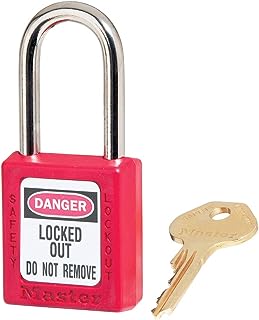 *In some cases locks can be rendered inoperable by picking. This can happen because the lock design expects a key to be in there when the cylinder rotates to the OPEN position. Of course, there is no key where when we are picking it.

The most famous example of a brickable lock is the Master LOTO (lockout / tagout). If you over-rotate the cylinder after a successful pick the pins will fall into the body and now you own an inoperable “rattle”. Some locks are guttable (allow disassembly) and can recover from this kind of scenario, but the Master LOTO is not one of them.

The possibility of irreversible damage is one of the reasons the lockpicker’s ethics forbids picking a lock that is in use; the lock could get dorked up so bad that even the original key can’t open it.