I mentioned before that I went beyond the main Kool Corner camping area and turned back because one of the tracks was washed out. Muffin and I walked up there to get a second opinion. It turned out to have been a good call.

This low spot going around the right hander turned into deep gravel, which inspires one to keep some forward momentum going: 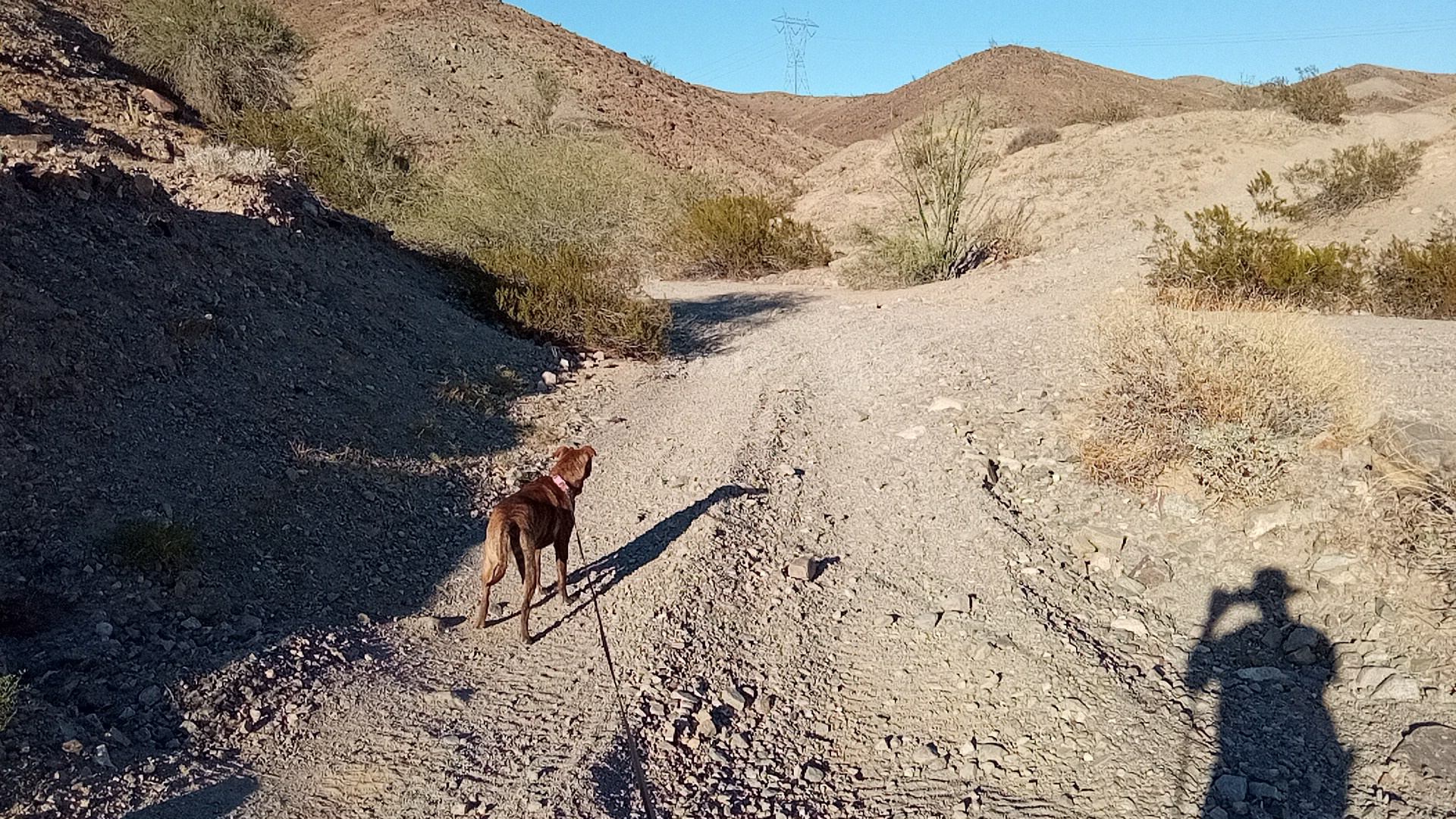 Steep/loose/rutted section ahead but not worrisome: 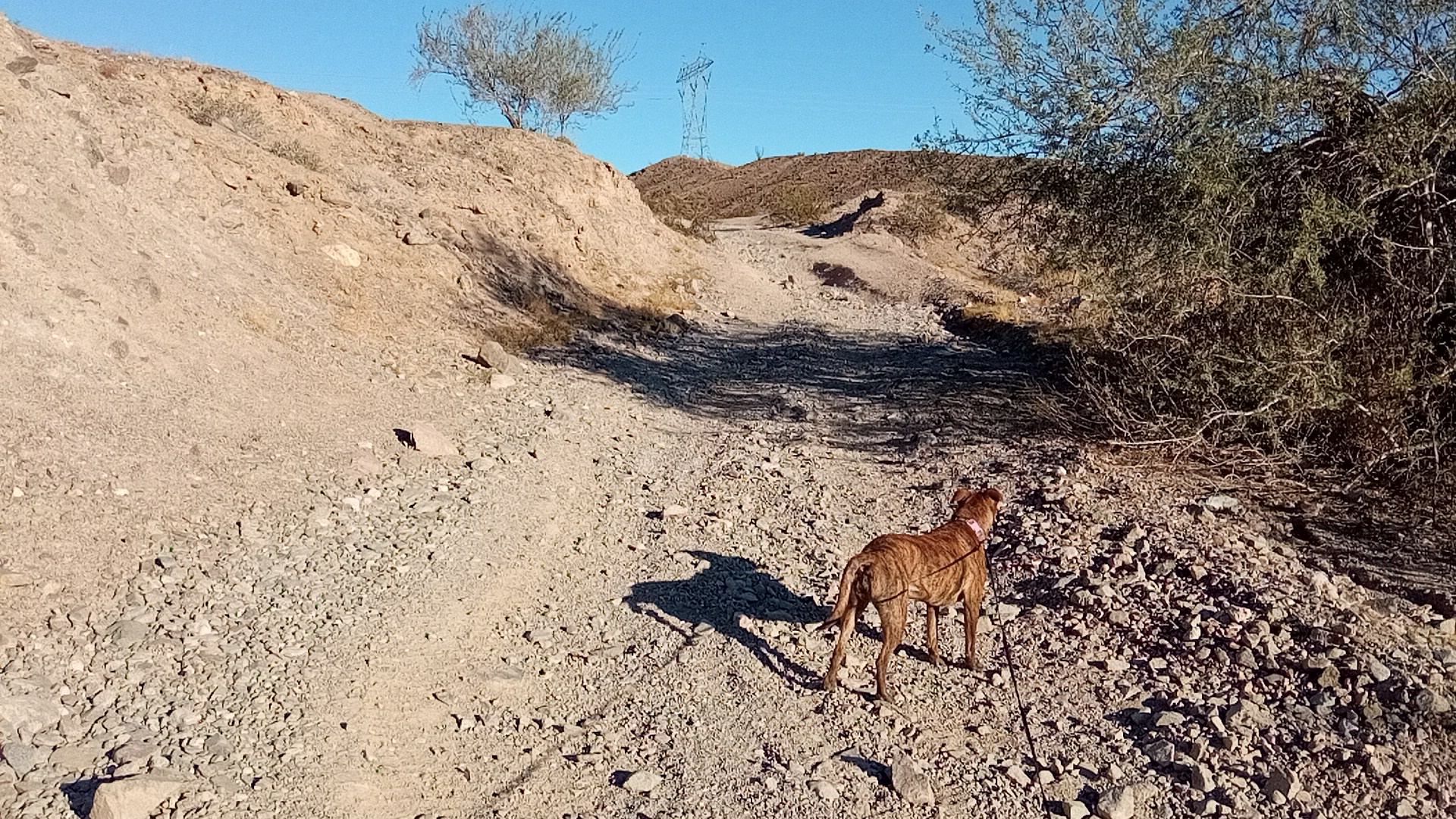 after that there was a steady, dusty climb: 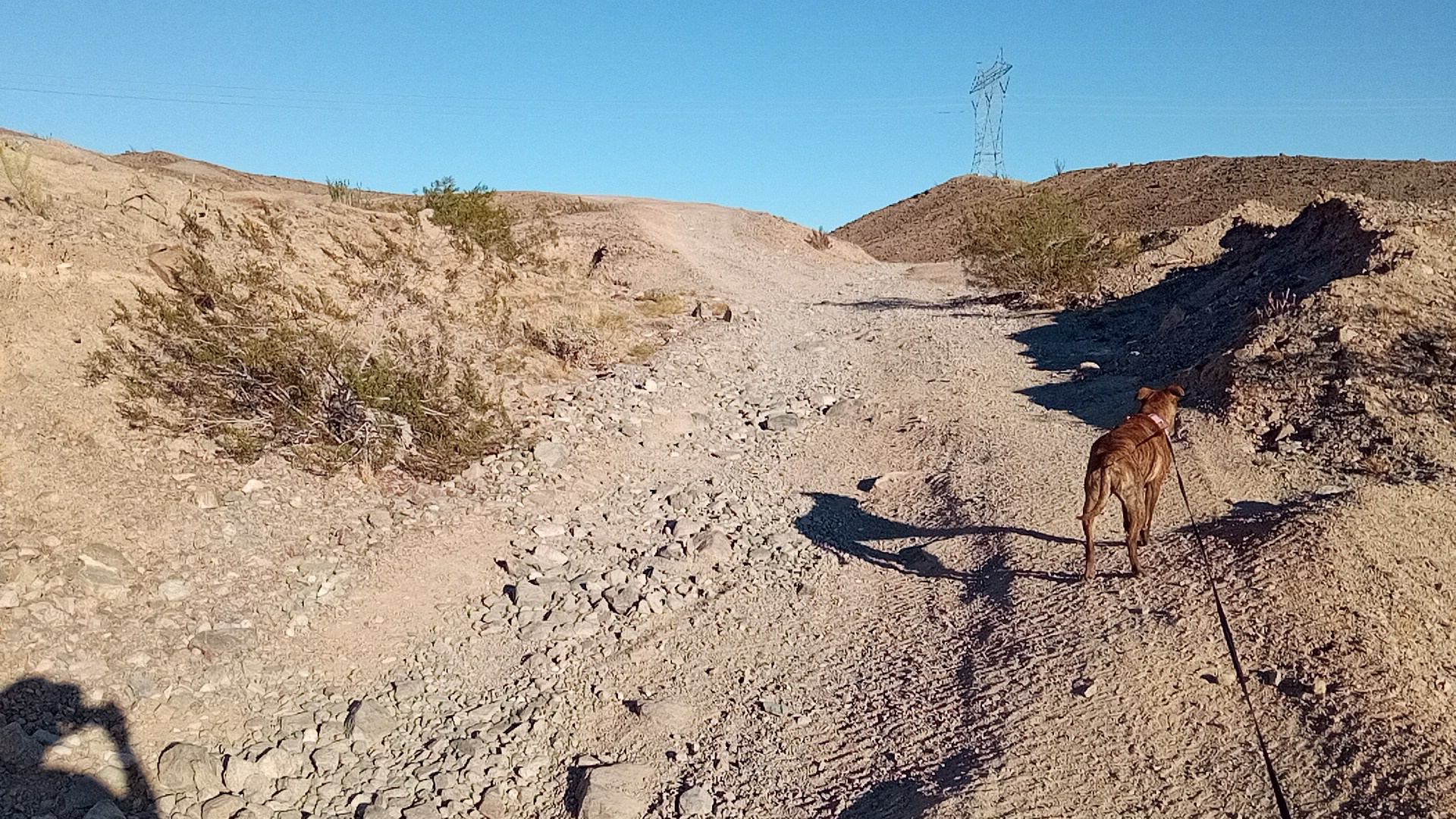 The actual two-track from here to the crest is smooth and confidence-inspiring, but a washout lurks ahdead where the trail kinks to the right: 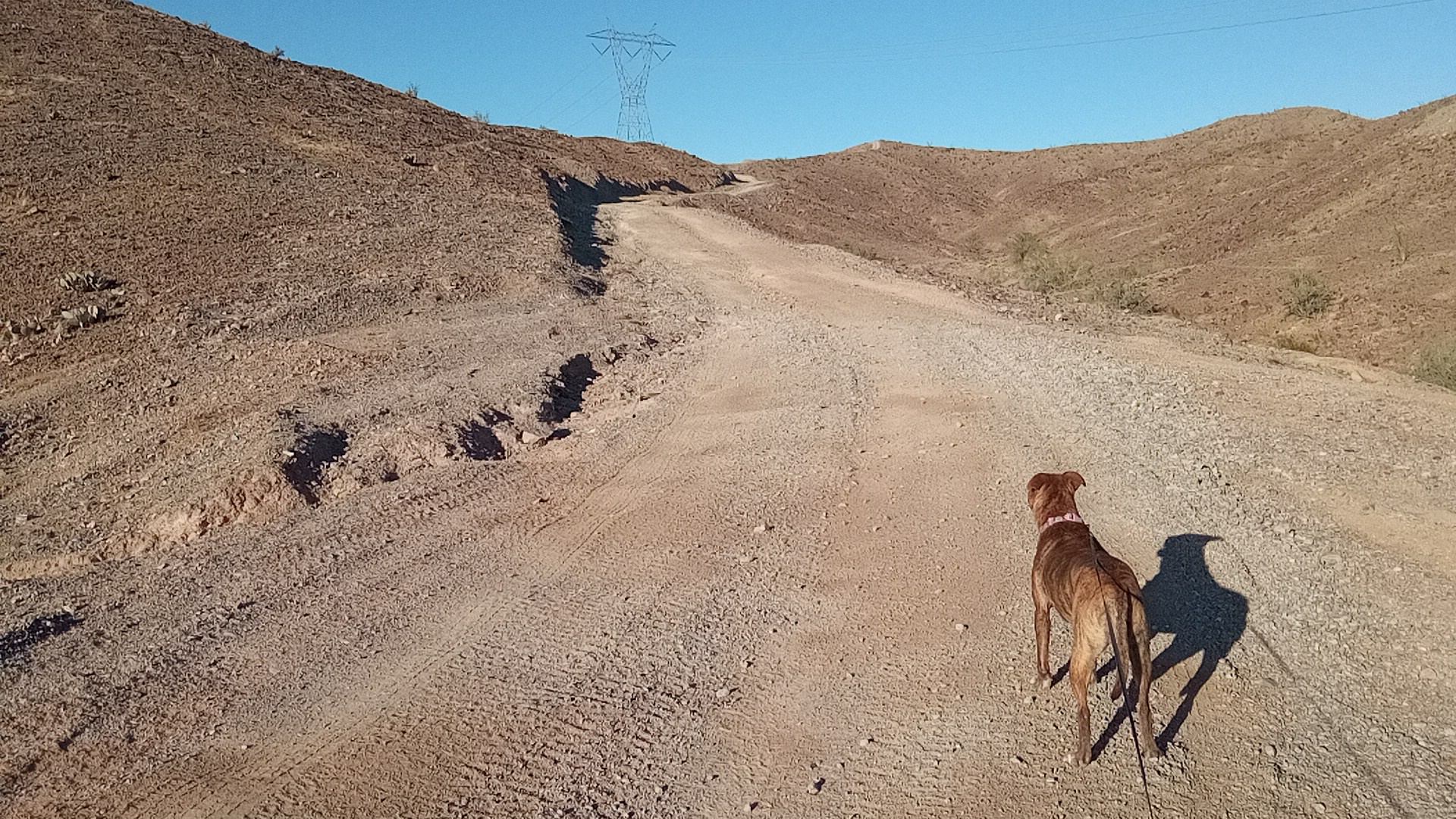 The washout is just ahead of where Brave Muffin is standing (she likes to stand on the edge of things): 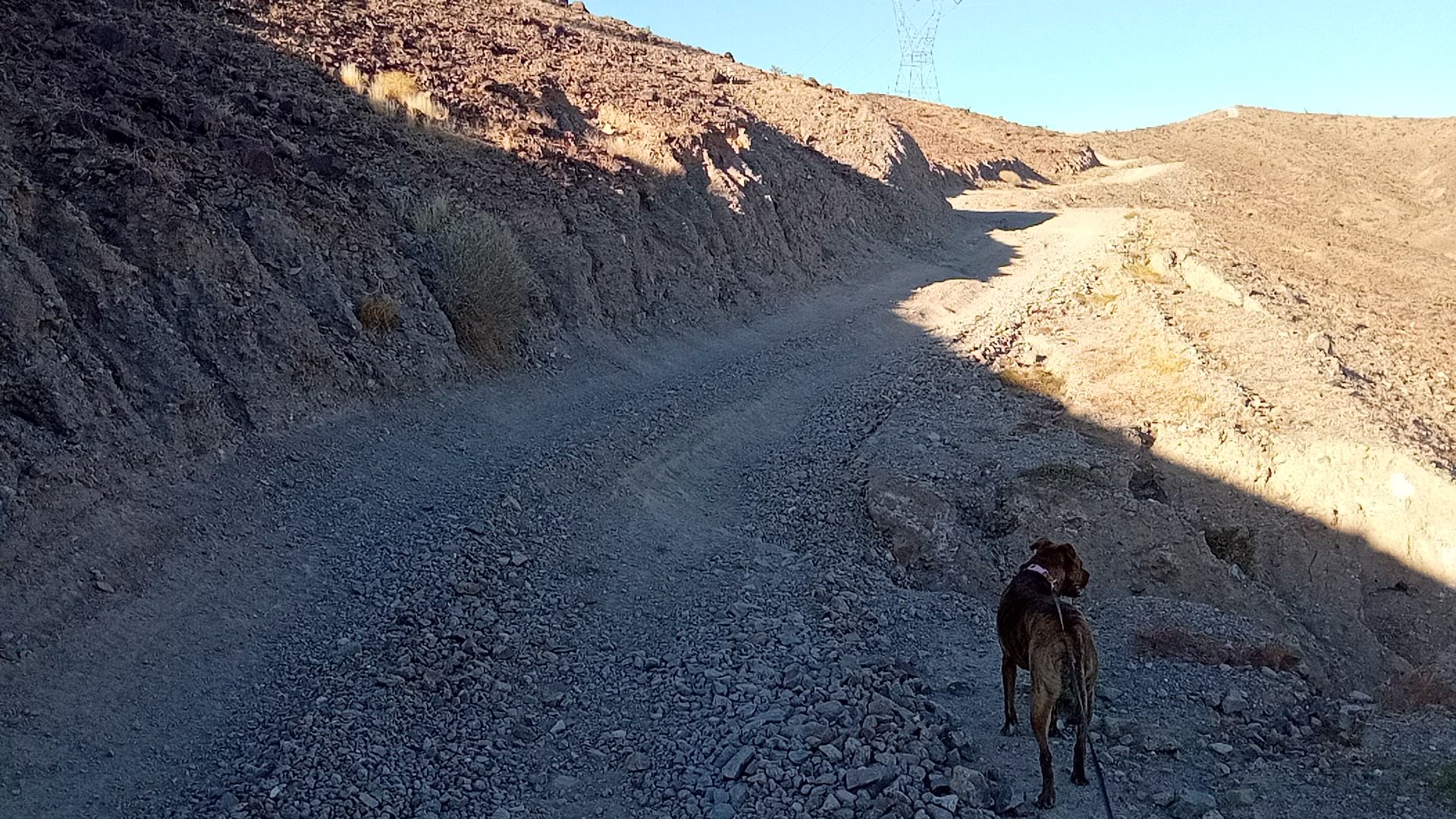 The Promaster is wide enough that if I was scooted fully left the right tire would be off the right track and into the washout. Combine that drop with the tilt at that location (caused by people “climbing” the left wall trying to get past the washout) and it is not a great spot for a tall vehicle to be.

This is the side view of the washout: 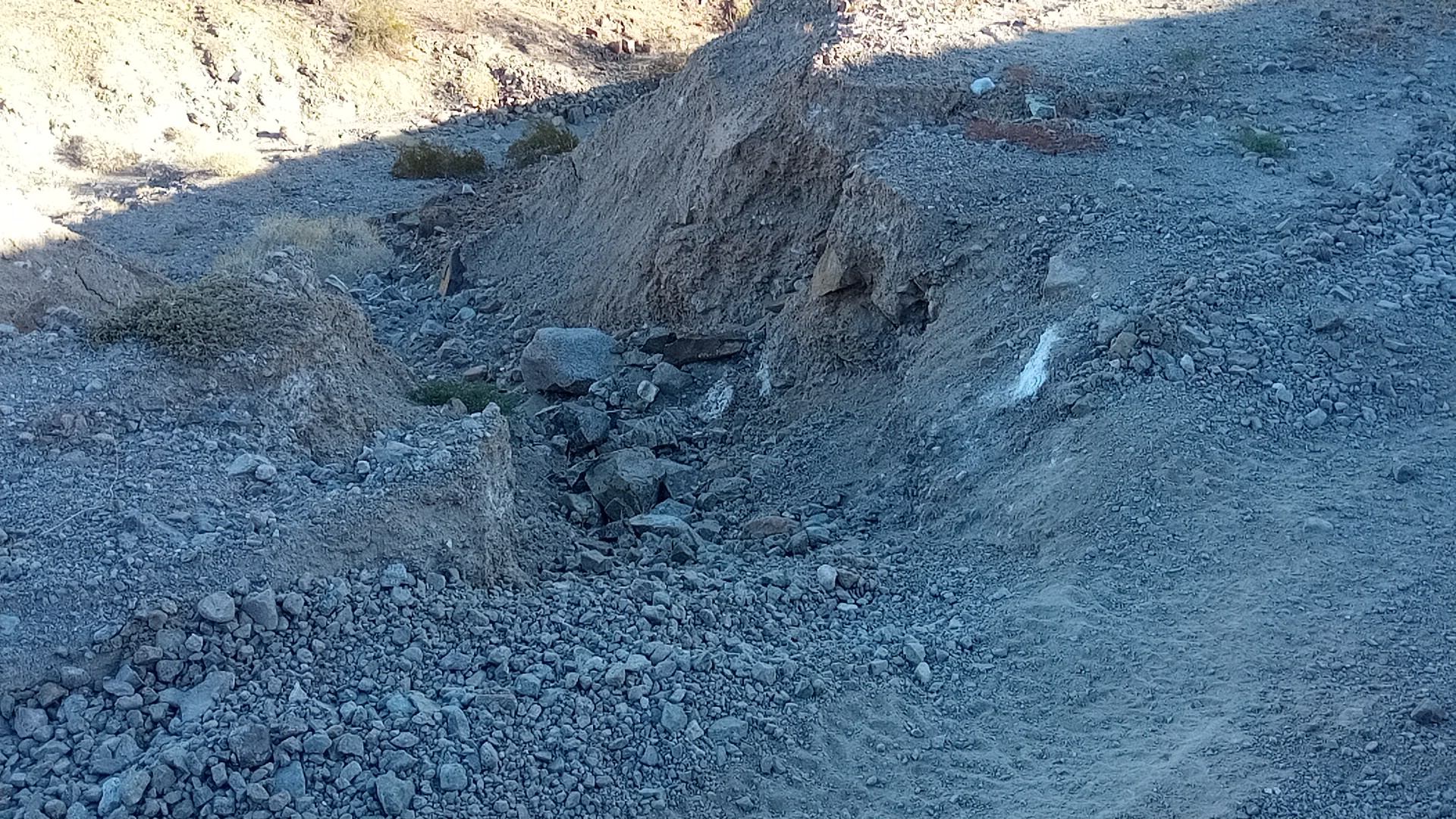 There was another washout ahead, but it was further to the side and I would have had at least half of the right tire on solid ground. Also not as deep at the trailside. 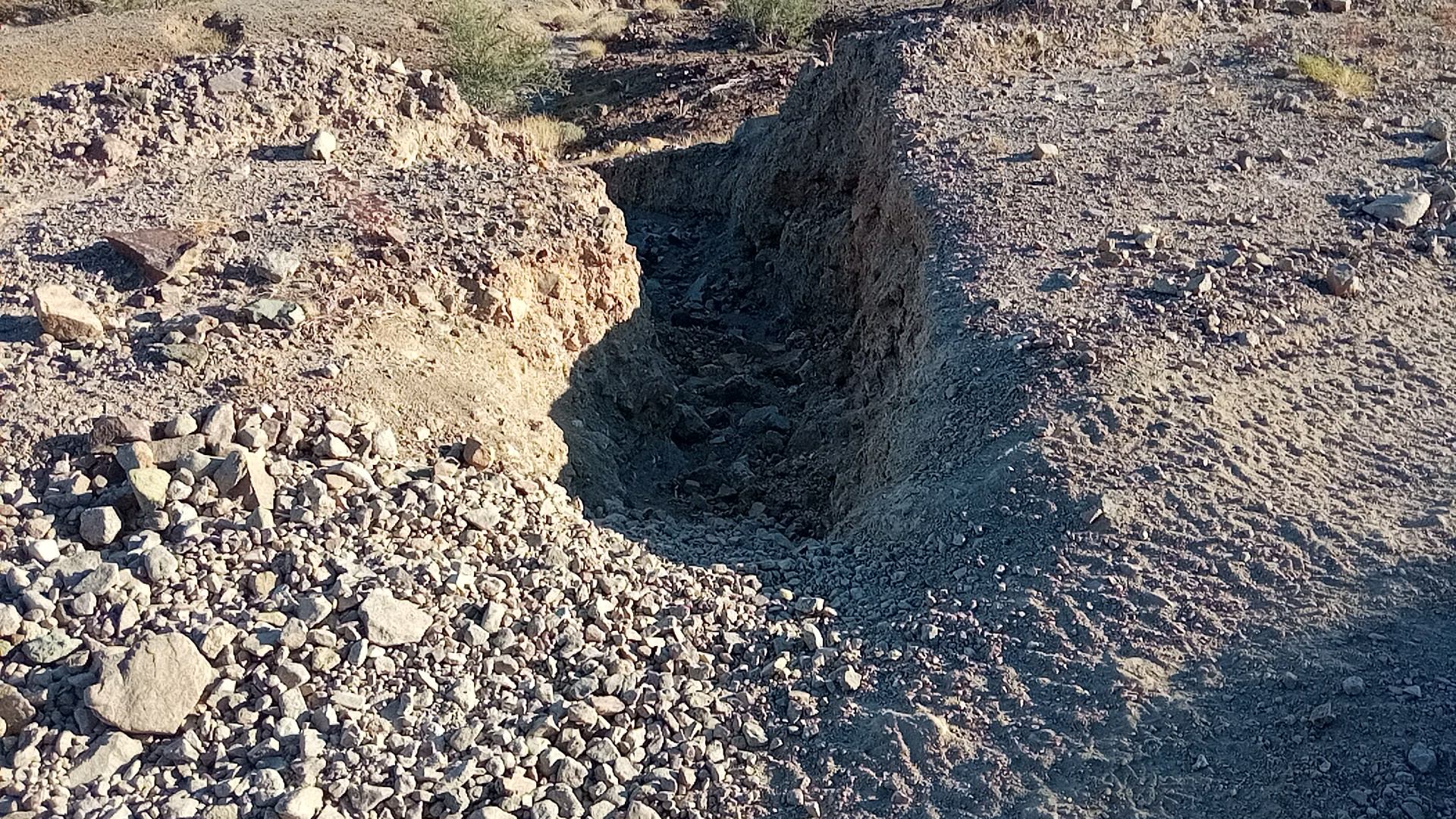 This spot nearer the top will wash out in a few years but is good full-width trail right now: 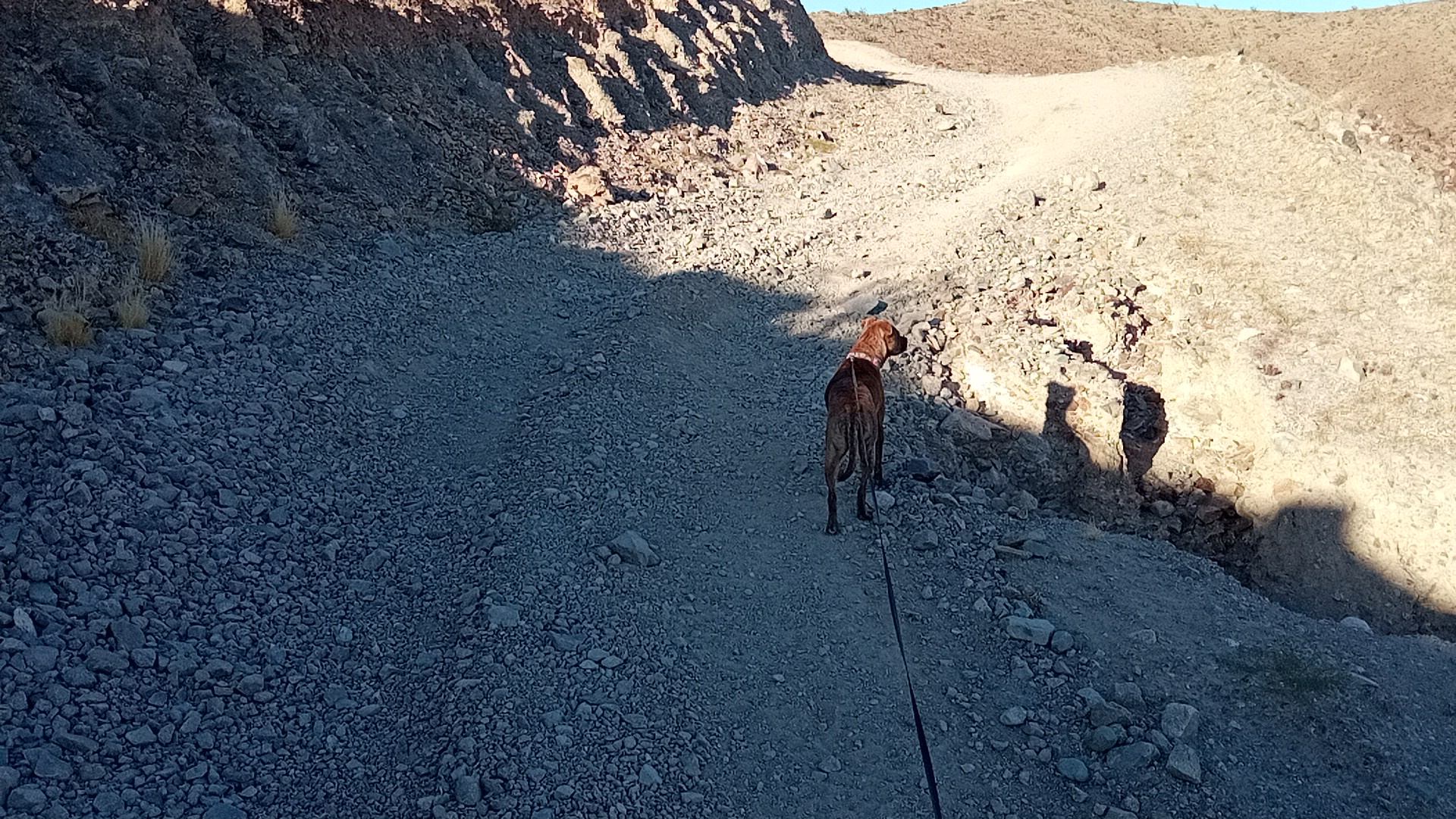 Once we got to the crest there were some hiking and UTV trails but nowhere to camp. So it was a doubly good call not to chance it.

The largest flat space is directly in a utility line right-of-way. Notice the weird billboardy thing on the next hill over. 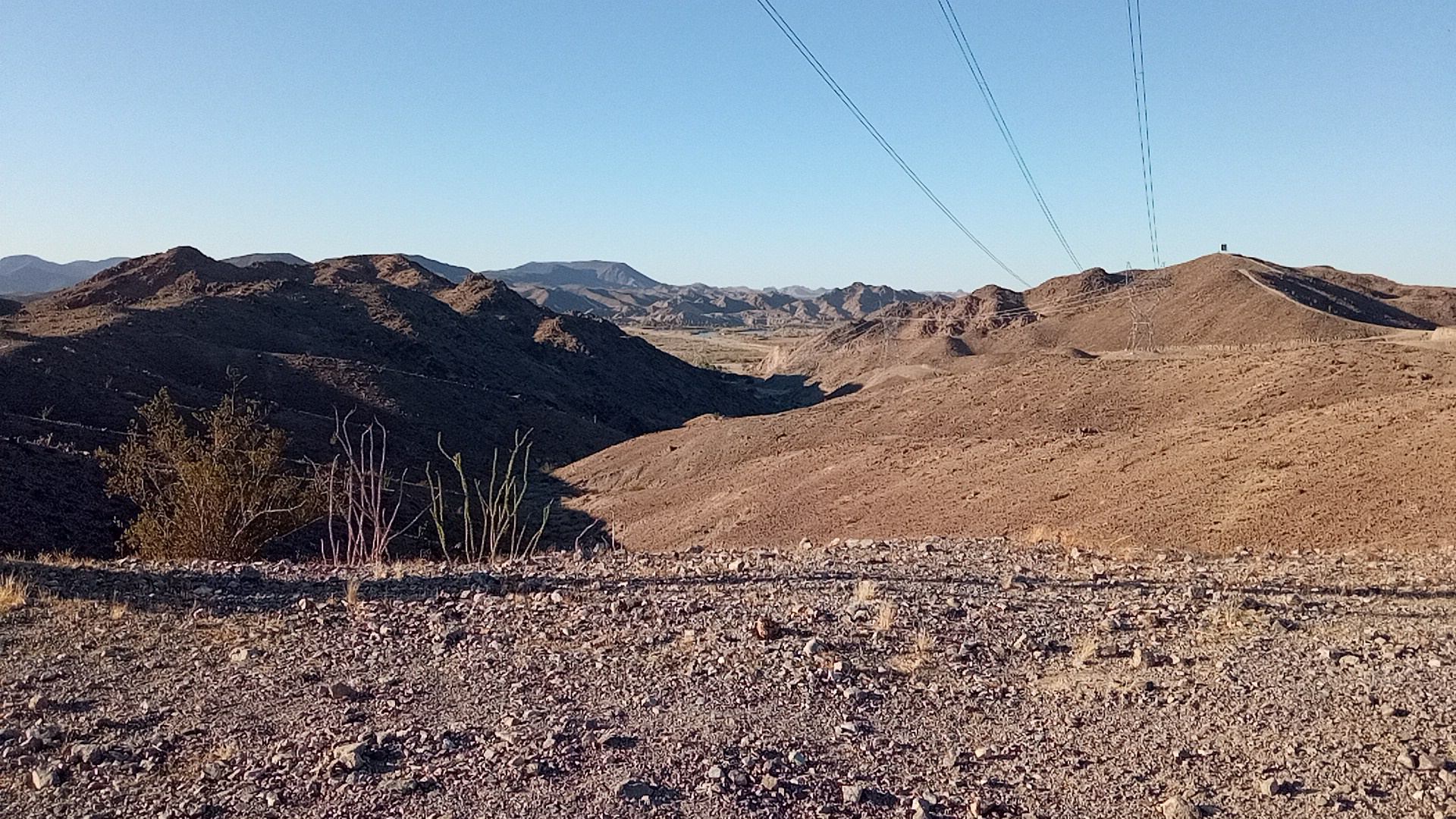 We walked down the other side a ways to see what we could see, but it was the same so we went back to the crest. Pretty good view of Sugarloaf, which we’d hiked to earlier:

It looked like a series of ridgeline paths would take us back toward camp (toward the sun), and we had enough light to try it and backtrack if needed: 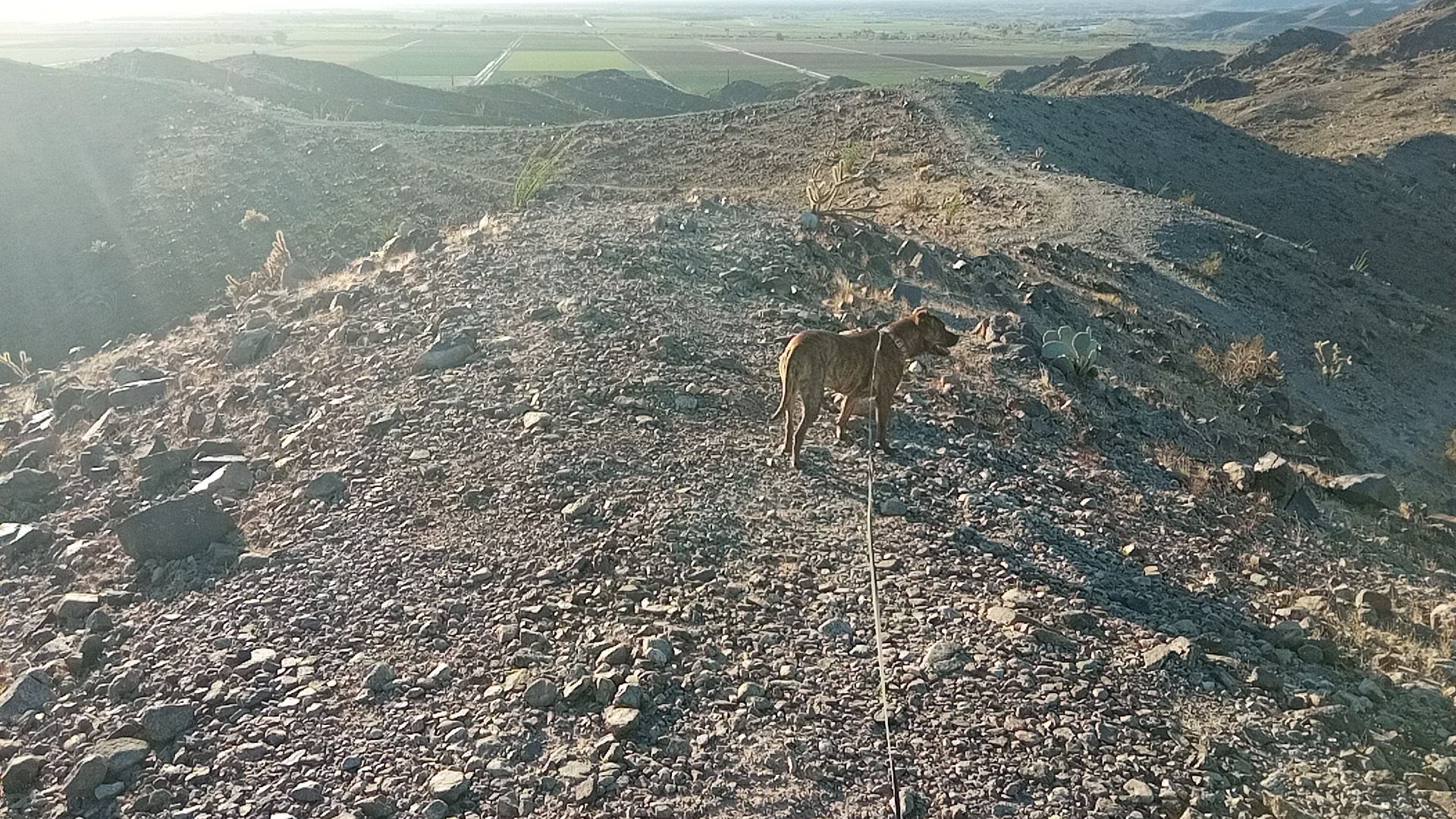 The top camping plateau was visible in the distance, though my camper wasn’t visible from here:

Most local crests had a cairn at the high spot. Most were abou 2’ tall but this one was a 4-footer: 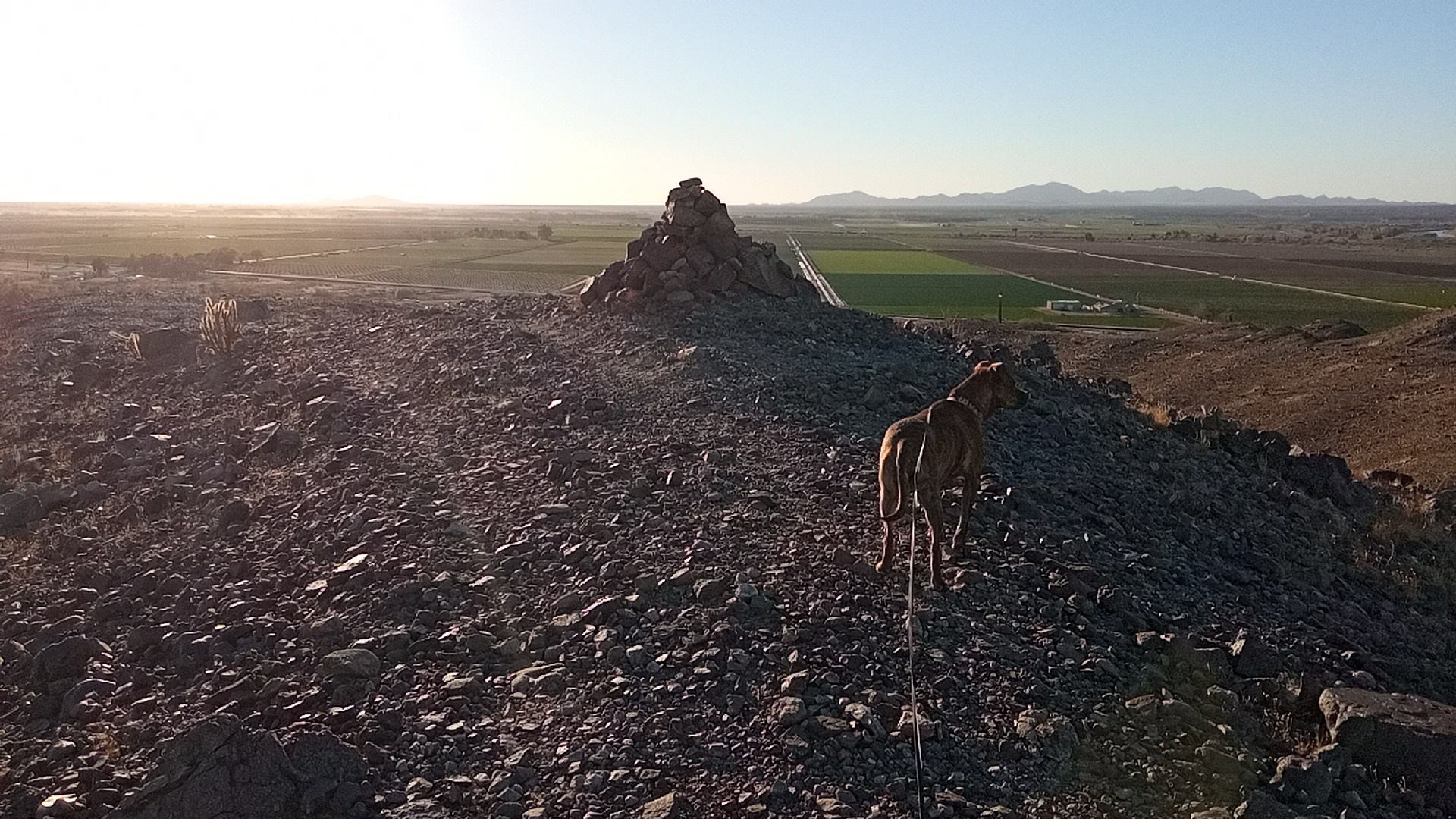 I was breathing pretty hard and decided stacking heavy stones on top of a hill is a young man’s game.

The promised land is in sight. From there it took about a half-hour to pick a line and get back. 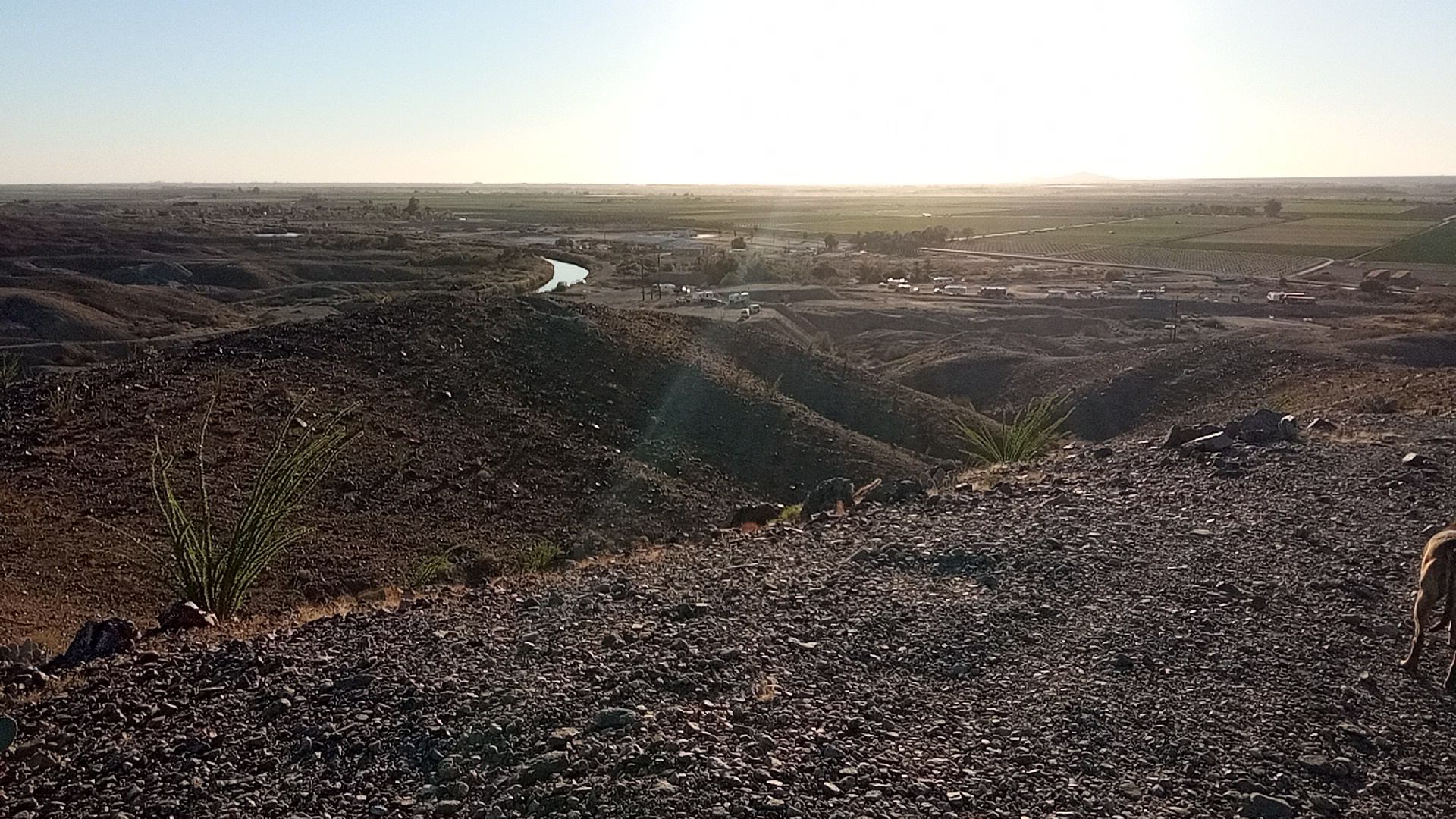 van is in center of pic

Muffin and I scrambled down to where the canal emerges from the earth (underground from Mittry Lake?) 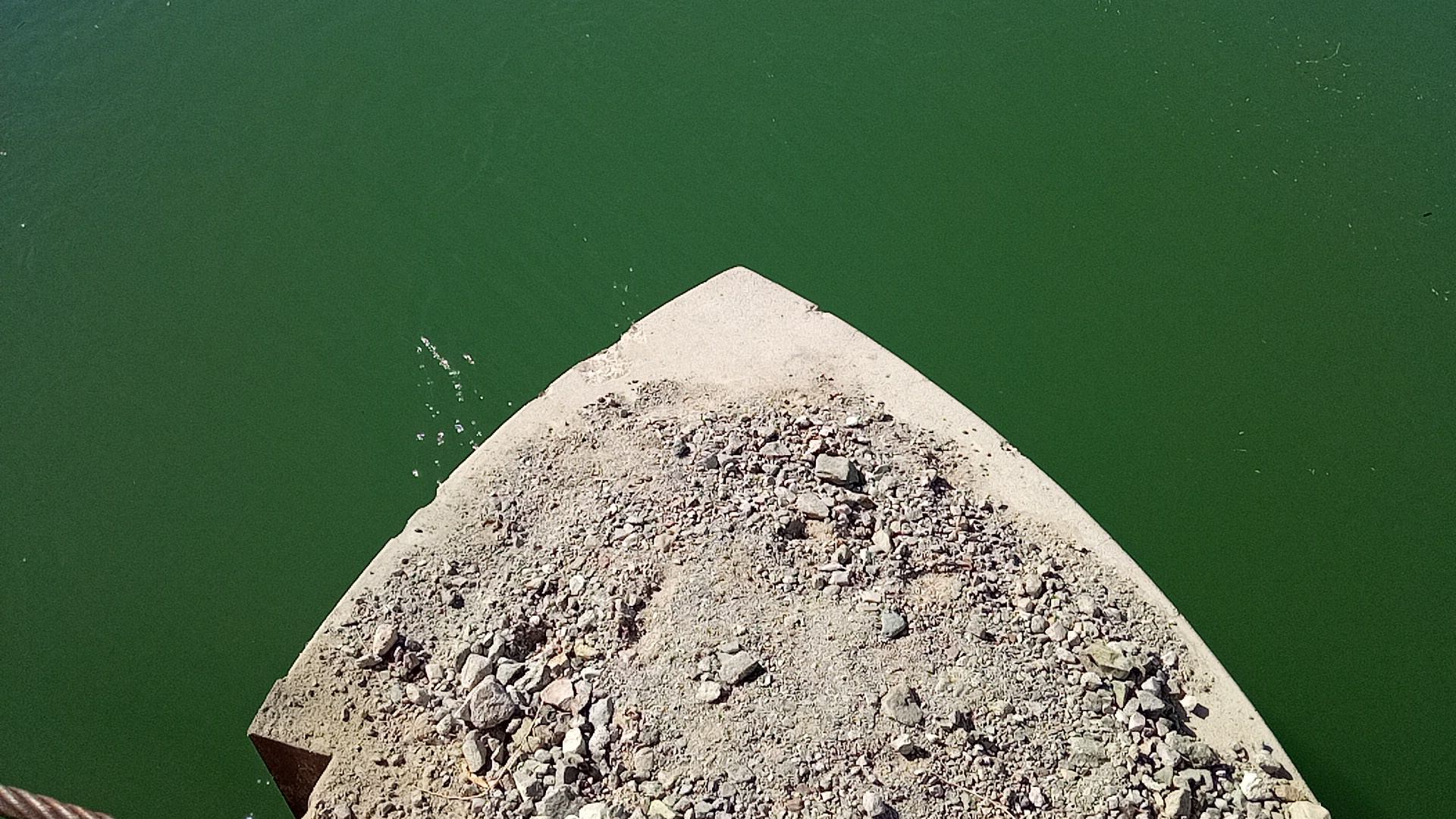