I was poring over the next move and decided to make a trip into town.

[btw, I looked up the name of this place;  it’s Discount Grocery Liquidators.]

This was my first stop of the day.  I got there early enough that I could park right on Kuehn St.  I got out my reusable bags and headed over.  They have plastic bags there but I prefer to bring reusable as they are bigger and easier to manage with heavy loads.

Since I have access to the Q dump xfer station I went heavier on canned foods.    This was my most $$ visit there yet;  I spent $28 and the resulting bags were maximally filled.  I wouldn’t have wanted to carry any more in one trip.   Success! 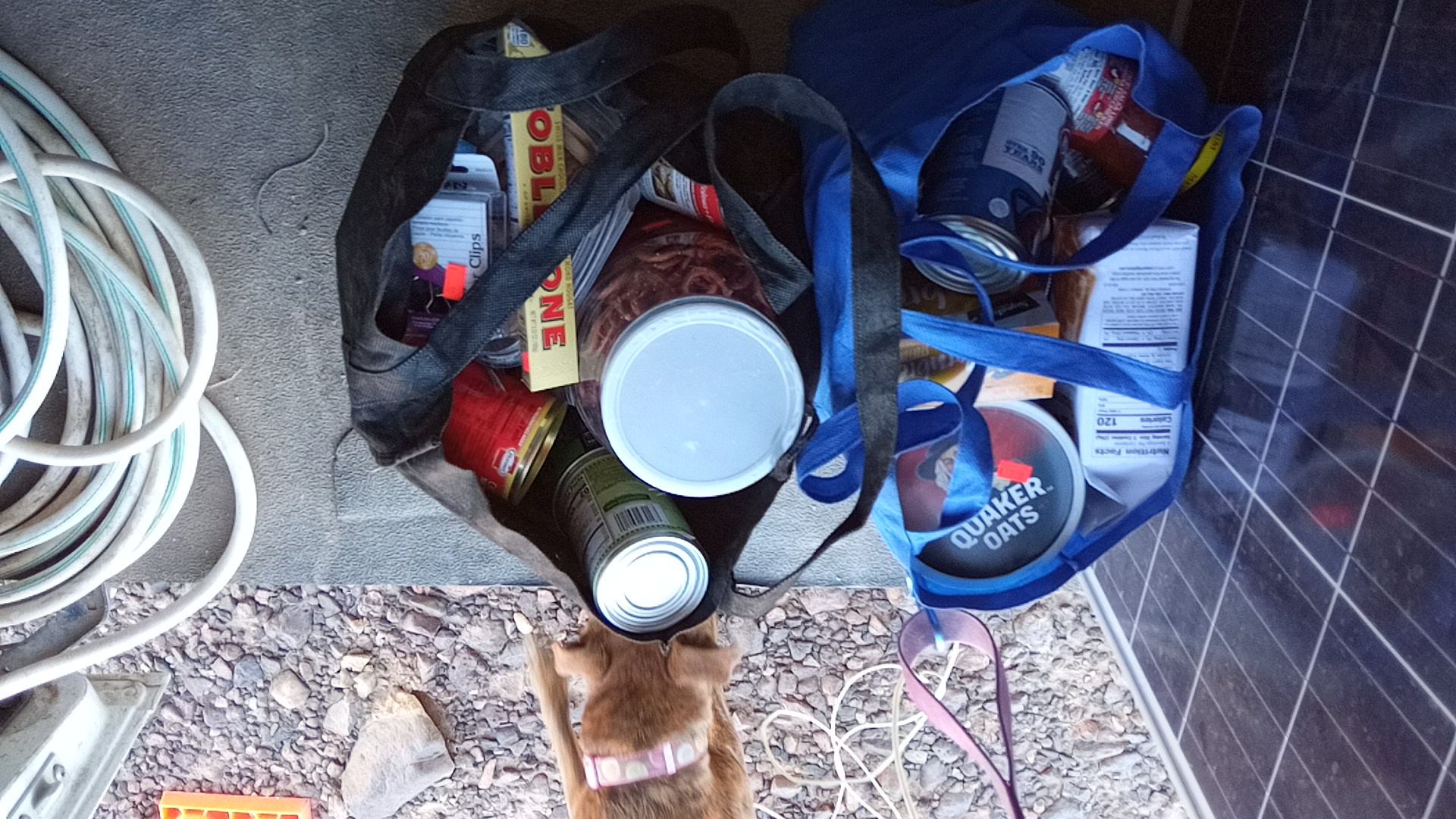 Panels are in their stowed position behind the passenger seat in this pic.

Went to the north side of I-10 where this particular flea market was and parked near the post office.  Lots of parking available, which speaks to day of the week and the smaller numbers in Q this year.  Muffin and I took the long way in so she could be in the sand outside the flea market proper.

As we were walking in I could see the vendor removing the tarps from his tables.  A quick glance showed the  {pick} mattock was still there.

A new wood-handled one from Tractor Supply, Home Depot, etc, is ~$25.  I wanted to pay $10 for a used one in good condition.  I had $12 on me after the grocery run so that was my hard limit.

I greeted him and told him I wanted to buy the mattock for $10.  He agreed, we paid,  and dog and I left with the hardware.  Total time, ~40 seconds.  Success!

After we got back to camp I took some half-earnest test swings and the mattock cut a nice cathole in the brutally hard “desert pavement”.     Q is not amenable to catholing (too many humans) but it should do the trick in more remote spots. 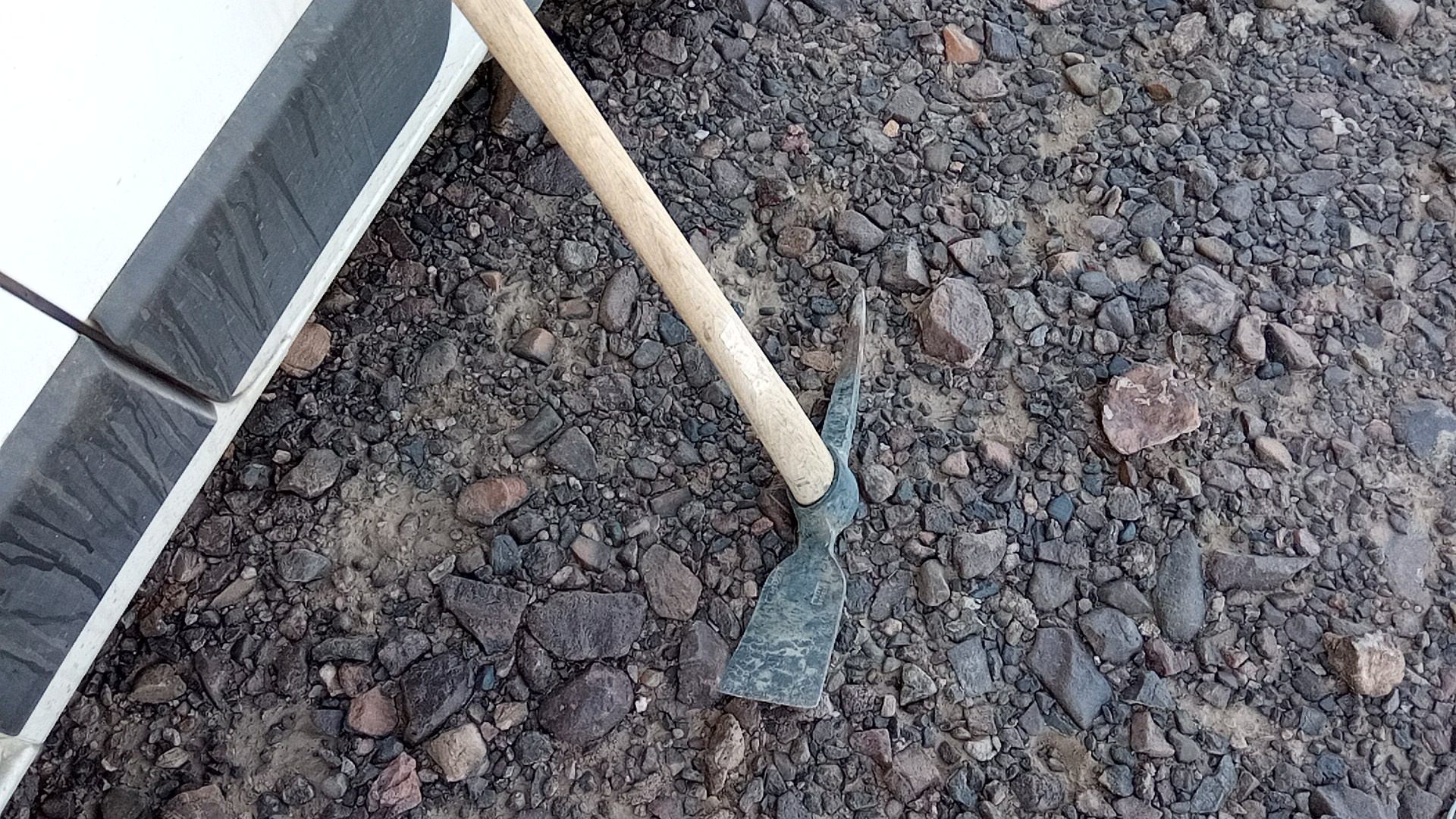 On the way north out of town back to Plomosa BLM I stopped at RV Pit Stop for a propane refill.   I remembered the exchange was $24.xx based on a prior discussion with the attendant.

There was a lot of noise (idling RV behind me, nearby road noise on Central, etc), but after filling mine the filler tech turned to the attendant and yelled what seemed to be “28”.    I interpreted this to mean $28 and thought wistfully I would have been better off with the exchange.   The attendant clarified that the filler had said “3.8 [gallons]” and that the cost was $9.85.  Oh.  Well, that was a nice surprise.

The math works out to $2.59/gal of propane.  The gas station I mentioned earlier (out of fuel) advertises $2.24/gal for propane, but I am happy to pay the margin to keep RV Pit Stop going.

I don’t use the 20# propane bottle directly;  I decant into the 1# bottles using one of those brass refiller thingies.

Over time the little bottles fail in one or more ways:

One of the ones I refilled yesterday had a bad main valve leak that I could not address by resetting the pin with the hemostats.  The propane was escaping;  I could either allow it to vent or mount the bottle to my camp stove and use the stoves on/off valve to stop the flow.  Either way, the greenie had met its last refill.

I got the bottle mounted to the propane stove and resolved to use it for heat that night after the sun went down.    For heating I use a flame diffuser I originally bought because the lowest stove setting is too high for simmering.   I removed the handle and the little diffuser has become an indispensable item:

When the stove is sitting on the galley there is about 1’ of horizontal clearance and 2.5’ overhead clearance from the burner.  Both surfaces get warm to the touch but not hot, and the nearby CO monitor stays on 0.   With the burner on the lowest level the van’s interior stays 20F+ over ambient and runs for about 8 hours.   After losing a lot of propane from the leak for mounting it still ran 7hrs while I binged Bridgerton.  It flickered out about 20 mins before the final episode finished.  Perfect timing.  Muffin and I hit the sack in a pleasantly-warm van.