Summer has officially started.   The dogs at the shelter are pretty comfortable.  Temps drop at night in the desert, cooling all the cinderblock buildings.  It was in the 90s by 1pm but felt quite cool in the kennels.  Asphalt is a different thing; it heats up quickly in the searing sun.  Before I walk dogs on asphalt or concrete I feel it with the palm of my hand.  Still not too hot while I was there.

There were a bunch of blue-shirt volunteers on the day, probably more than a half dozen.  Normally there are 0-2 others besides myself.  There were probably 3 dogs being walked at a time, a very good sign for the beasties.

I started with the housebroken dogs.  First up was T-Rex, the dog with a gentle spirit.  He’s been there a while, and I have no idea why.  He’s a Good Dog. 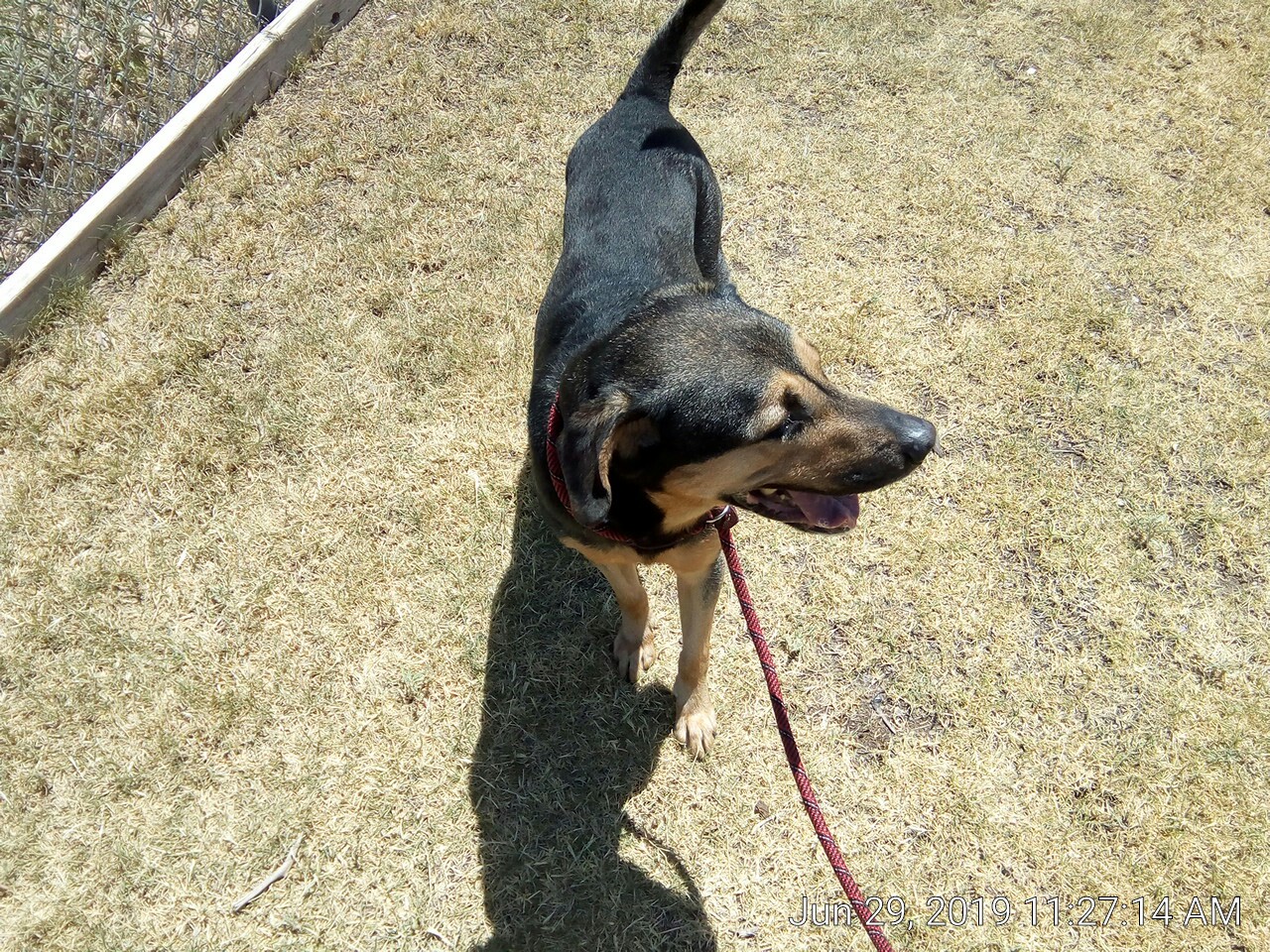 T-Rex is always well-behaved on walks[/caption]

Next up was C.C. who appears to be a dalmation mix.   She walked well on the leash, as you can tell by the amount of slack on the lead: 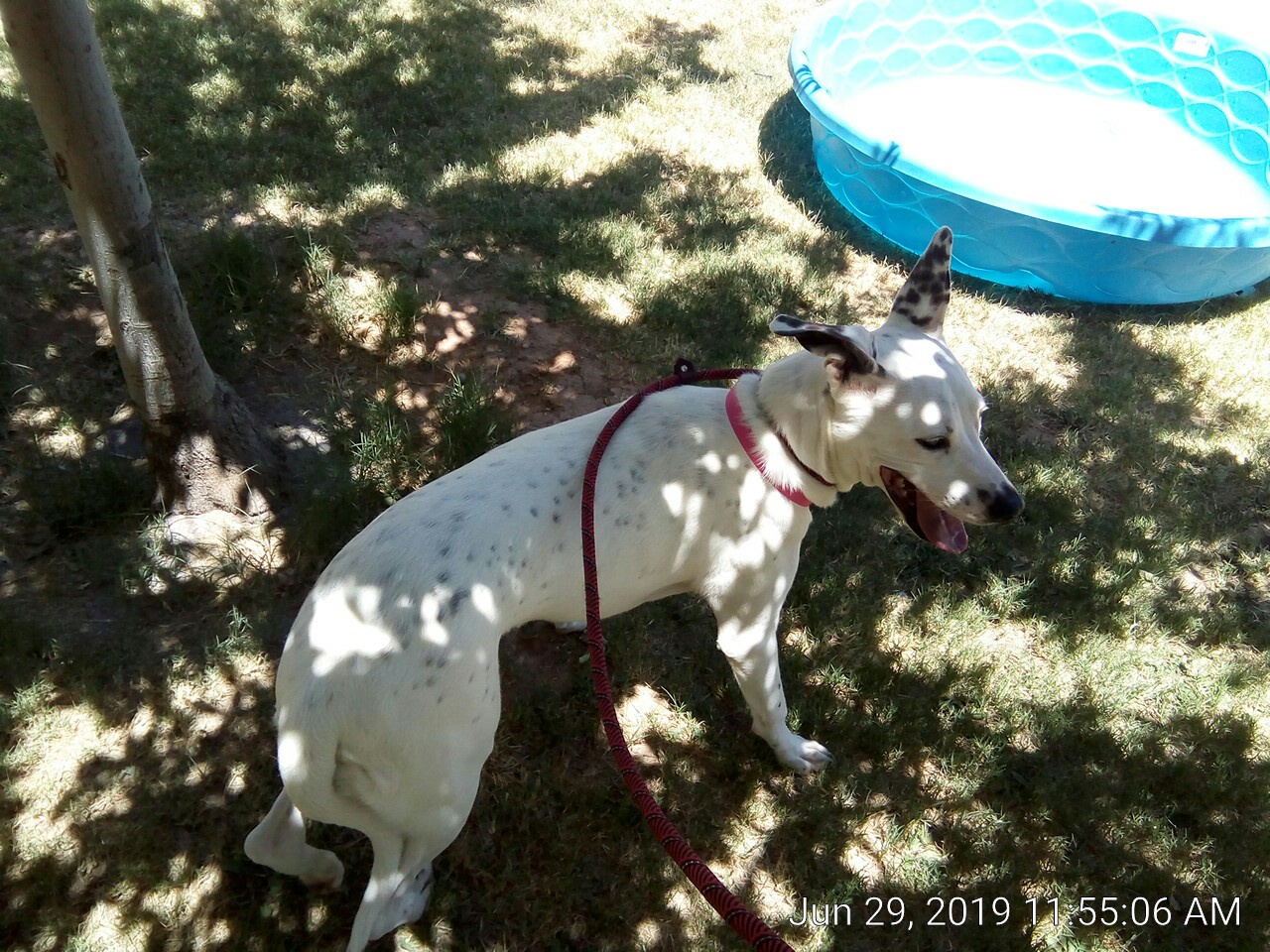 Jasmine is one of those pits that wallow in your lap and would lick your face all day if you’d let her. 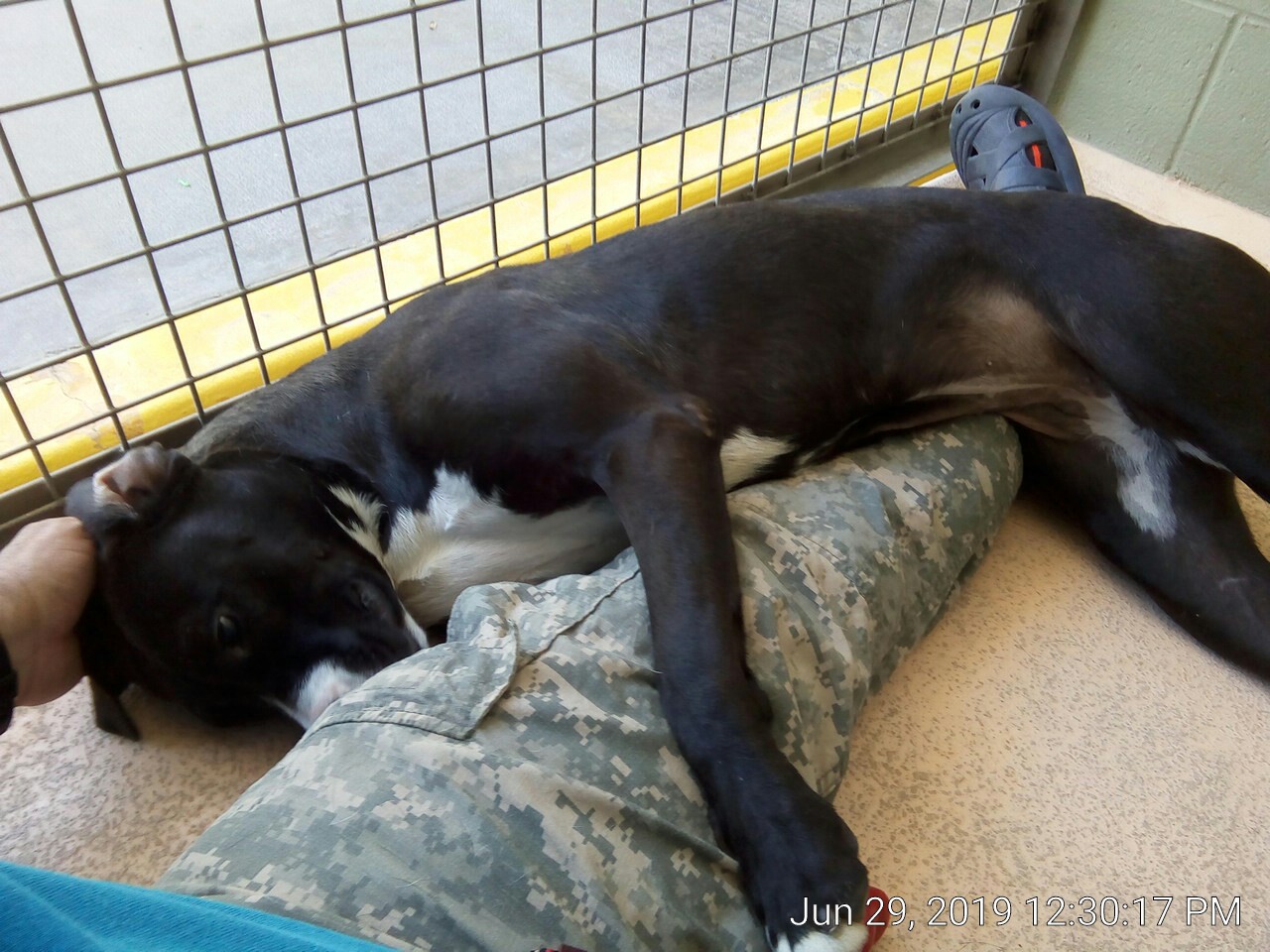 When she’d flop over she’d lay still for a while so I got a few non-blurred pics of her. 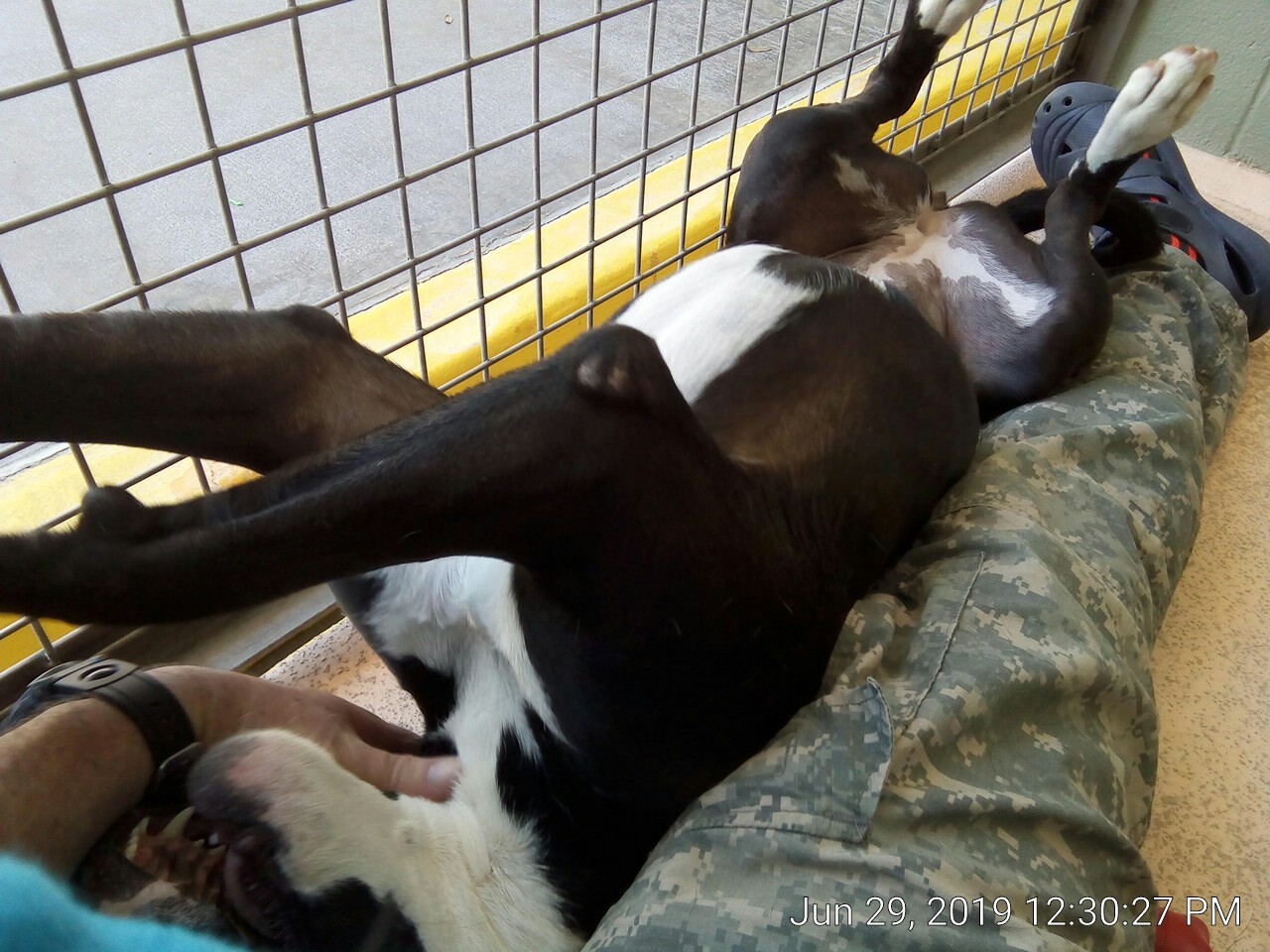 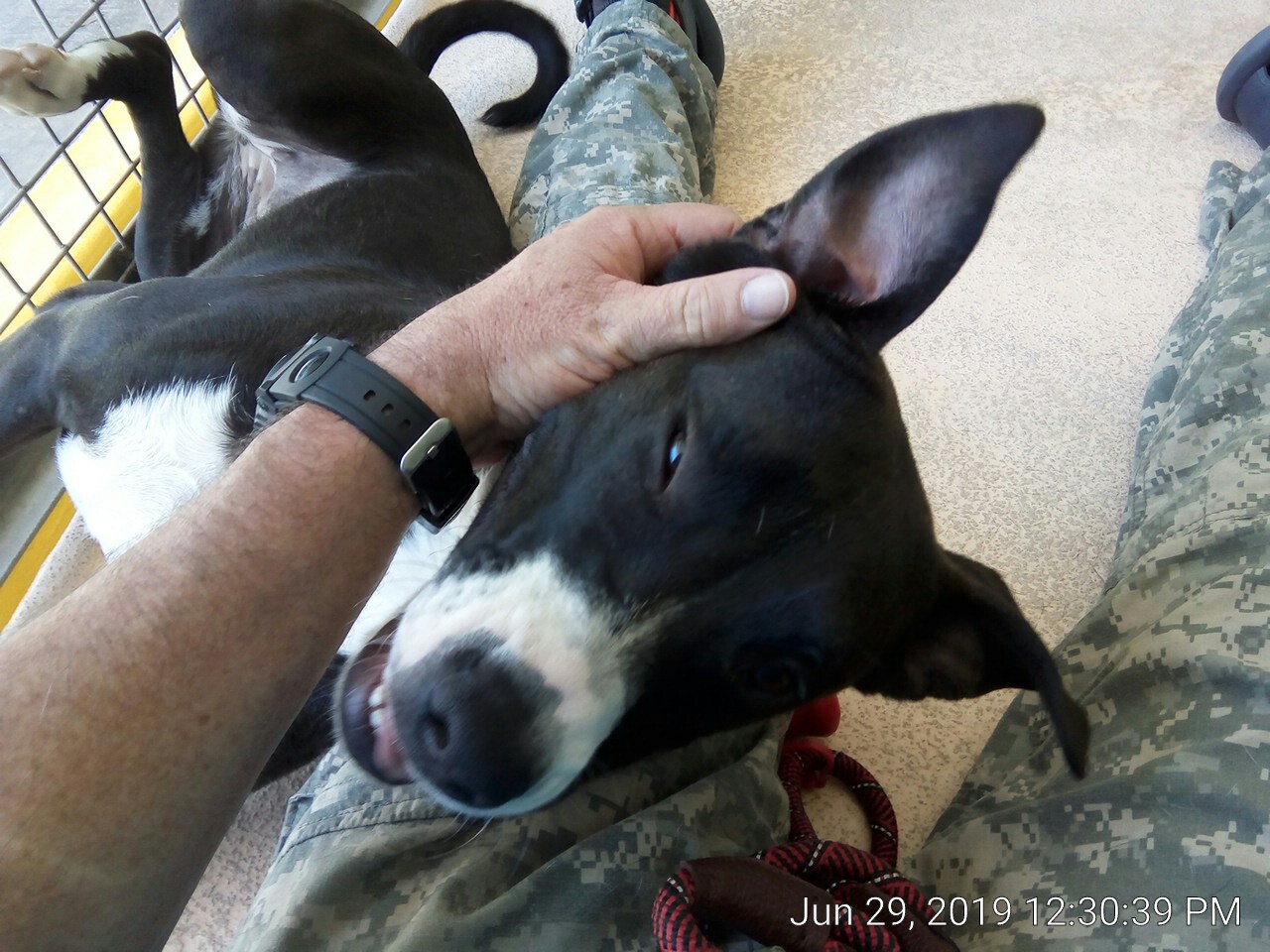 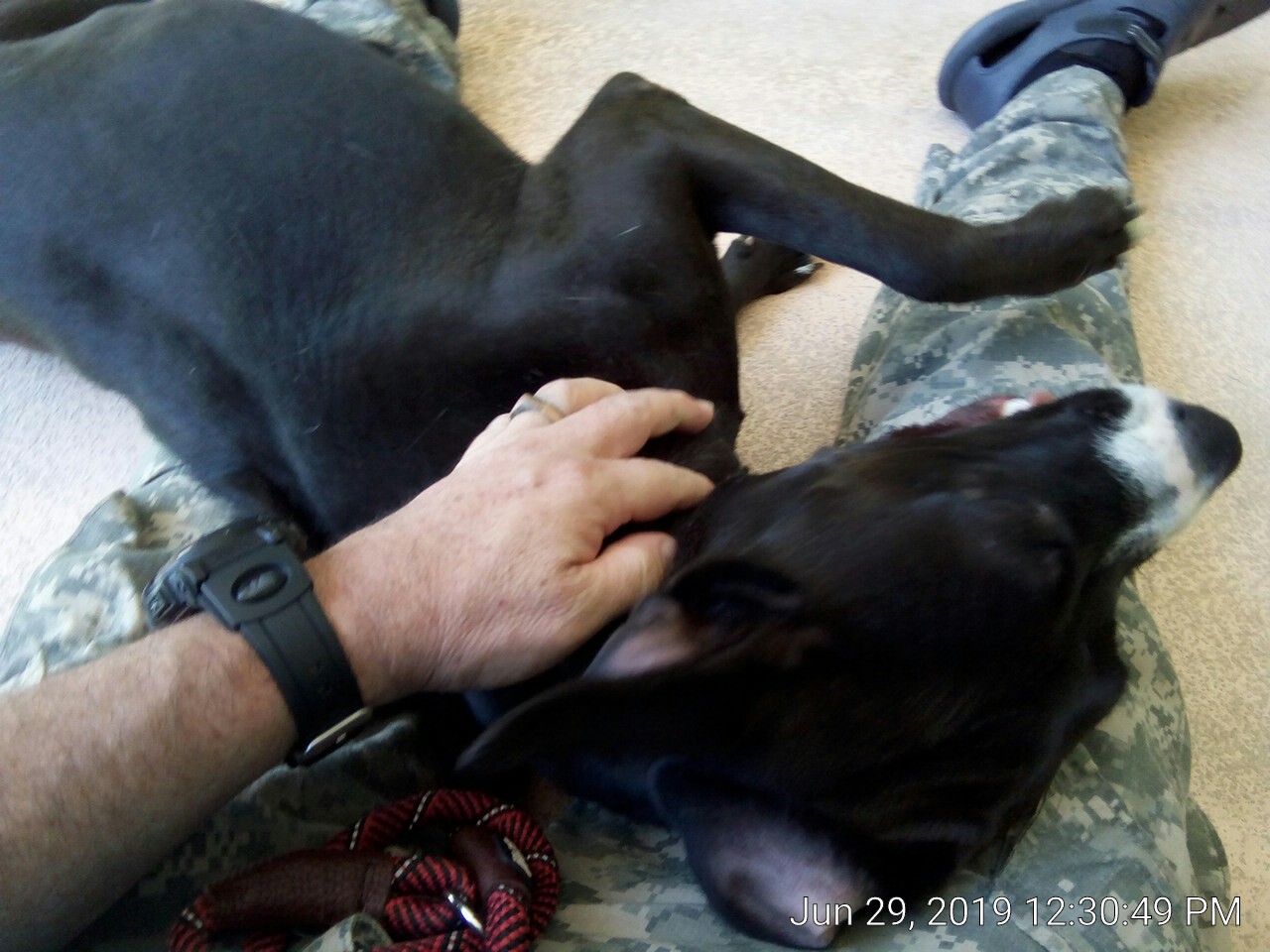 This belgian shepherd mix was cranked up in the kennel, so I sat with her a while before going for the walk.  She was much calmer on the walk but you can see she is pulling gently: 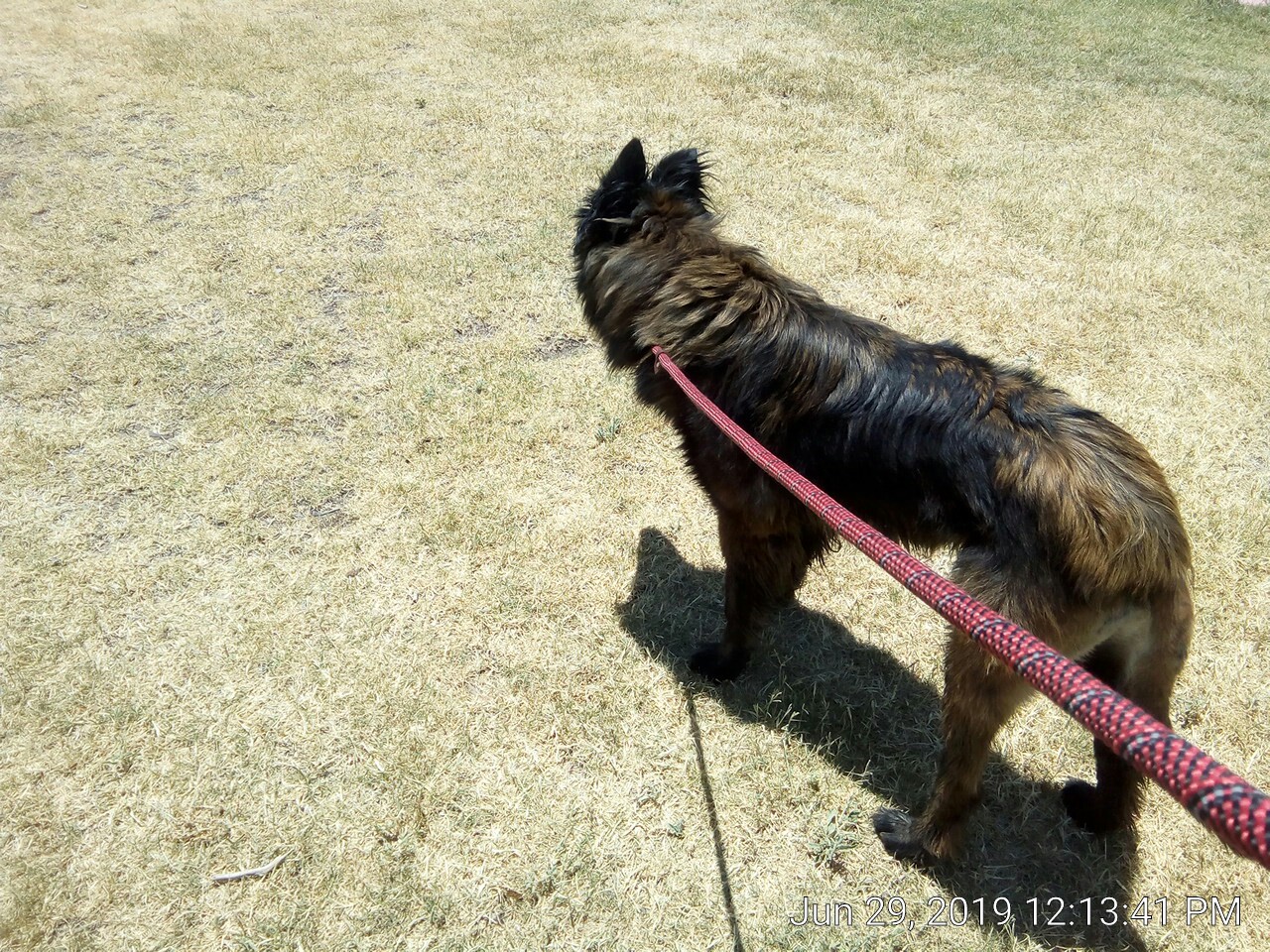 This dog’s hair color was beautiful.  I wanted to get the shears out for summer. Bzzzzzz…

Bongo is a chill pit-mix: 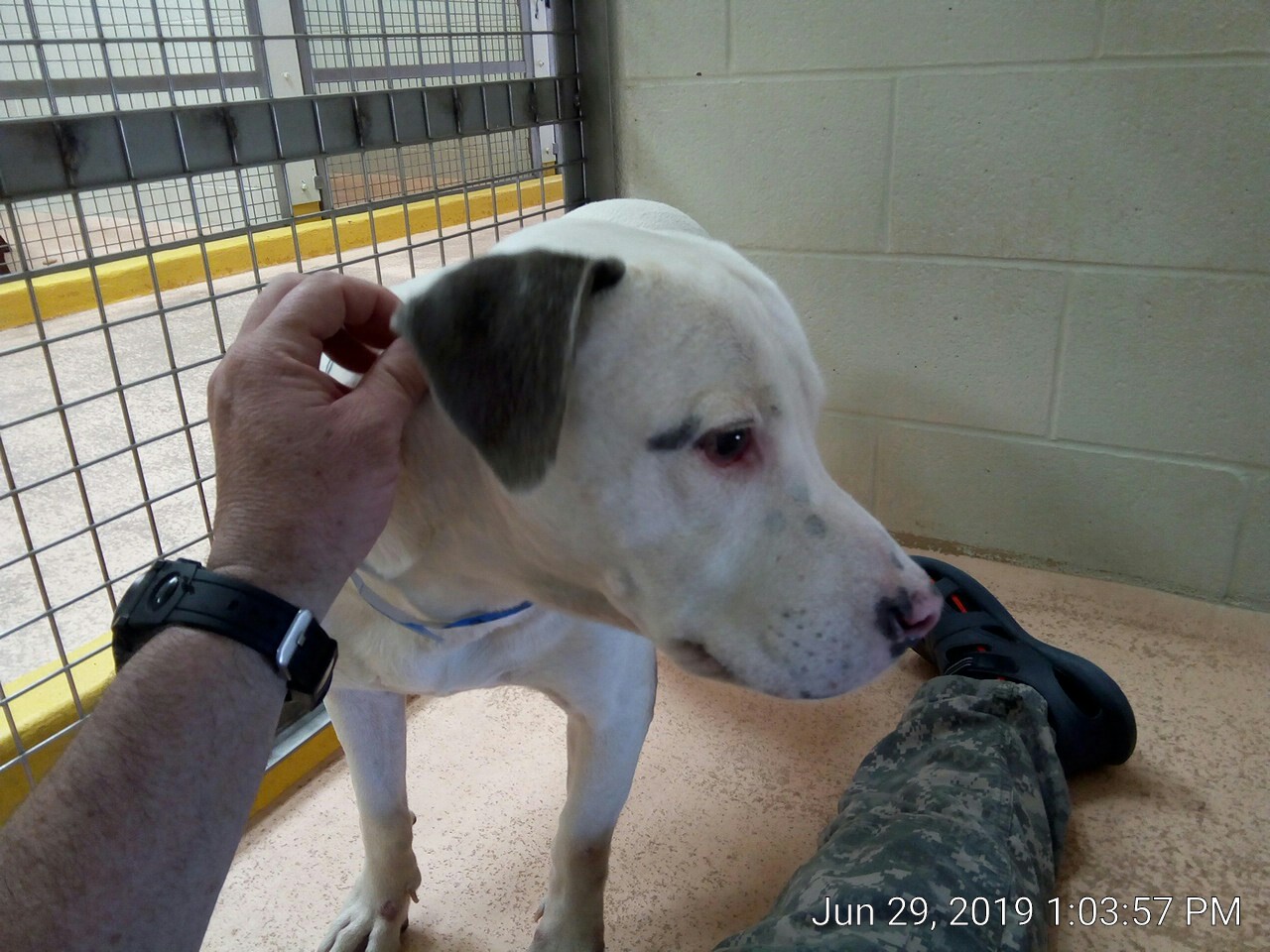 This is the business end of a doberman pinscher: 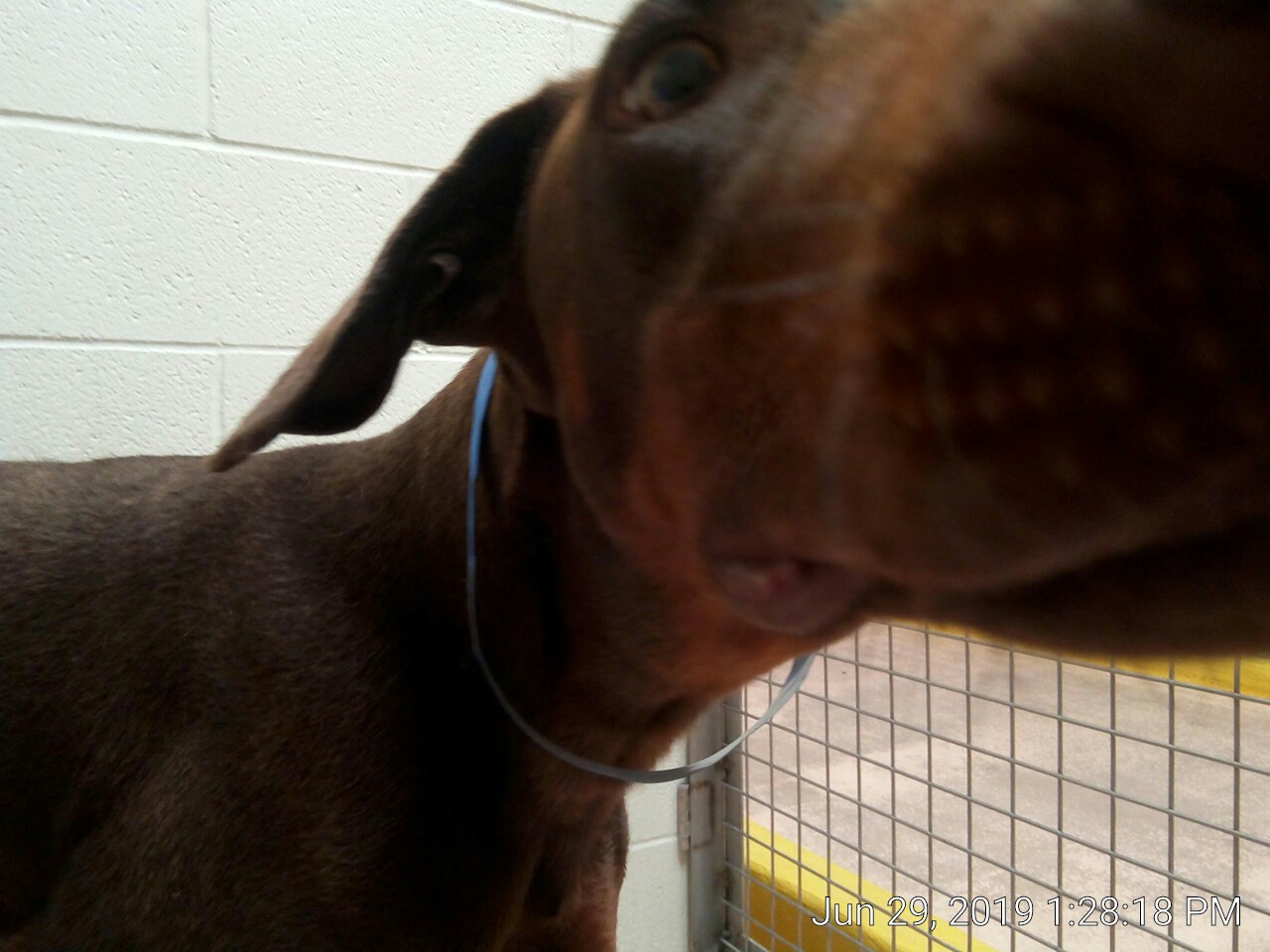 Let’s remind ourselves of an important truth about dobermans;  they are a personal defense dog, not an area protection (guard) dog, or fighting animal.

They are highly intelligent, always in the 10 ten smartest breeds and sometimes in the top 5 depending on who is judging.   They are fiercely loyal to their bonded human.   My advice is to not threaten the doberman’s human if you like your arms and throat where they currently are.

Having said that, they are gentle, beautiful animals completely at home with a family.   Part of the reason for this is their emotional sensitivity.  They read and respond to the human’s state of mind with a quickness that borders on hypervigilance.

When I took in a rescued dobie the first piece of the advice was:  “don’t EVER hit a doberman.”   Even harsh words may be too much for the sensitive beasts.  Speak calmly to the dog, guiding it to the correct behavior.

Now you know why Wolf, the red dobie at the shelter, is so skittish.   He is young and desperate for a human to bond with, trust, and protect.  I would take him now if I could. 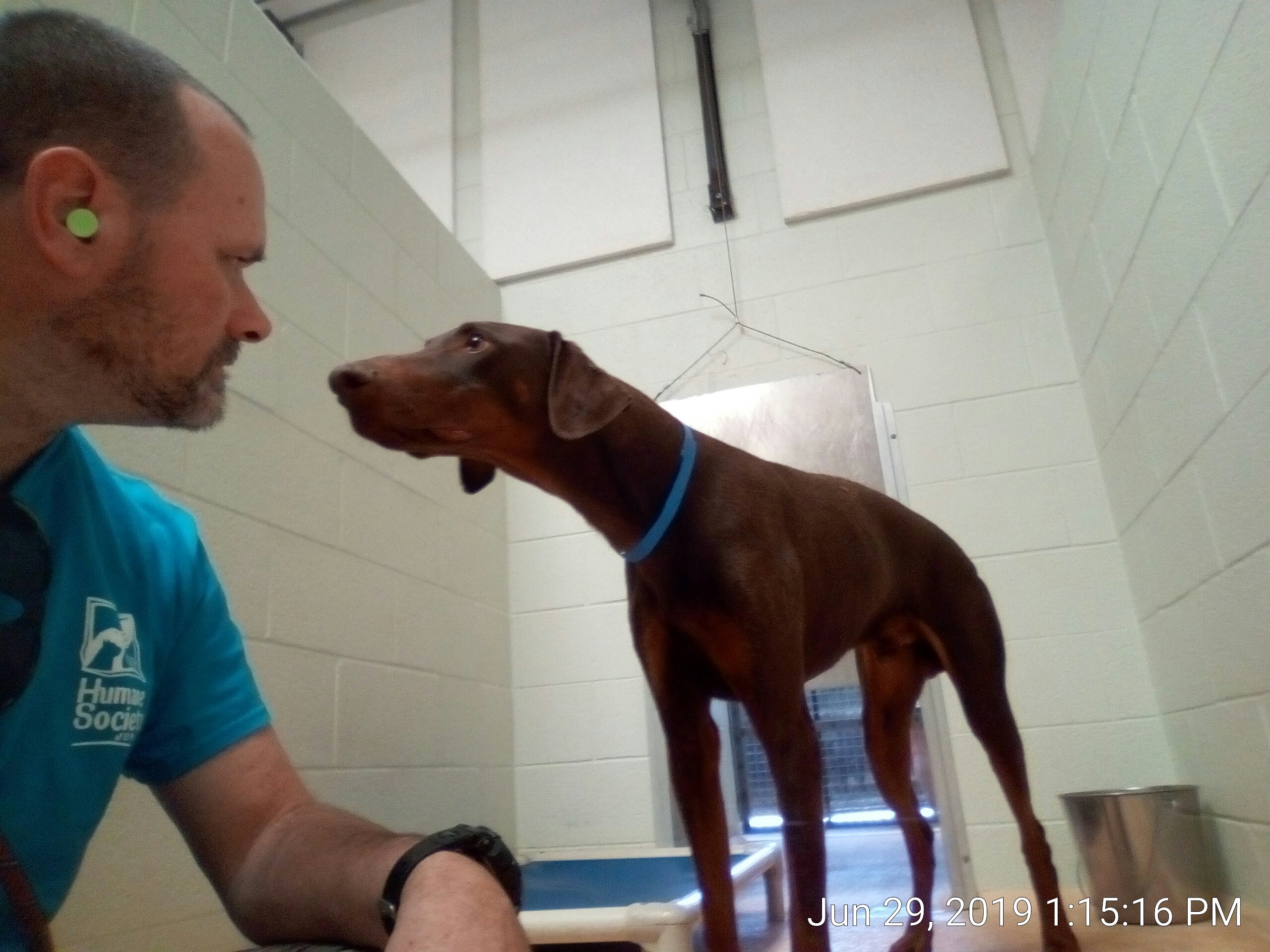 Their natural ears are beautiful.  Stop cutting them off, people.[/caption] 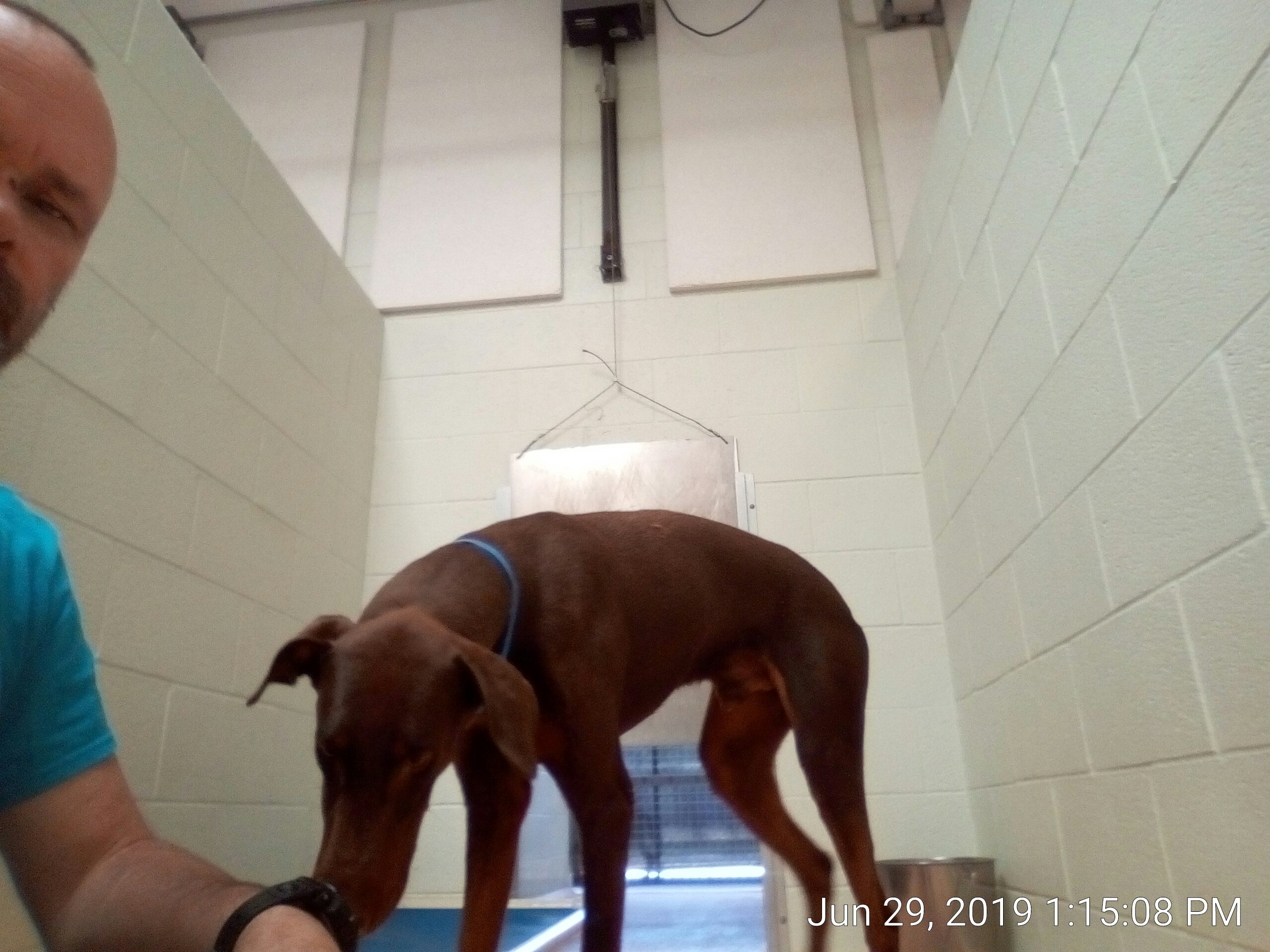 easing in for the first sniff[/caption]

For the first time I know of, we got every dog walked, small, medium and large.