Previous weekends I’d been at the shelter after it opens to the public.  This Sunday I went in early to do some of the grunt work that happens behind the scenes:

After that was done and the shelter opened I sat and socialized with some dogs.

This is Autumn, a Doberman/[GSD?].  Quite bright and sensitive, neither of which being a surprise to folks who know dobies: 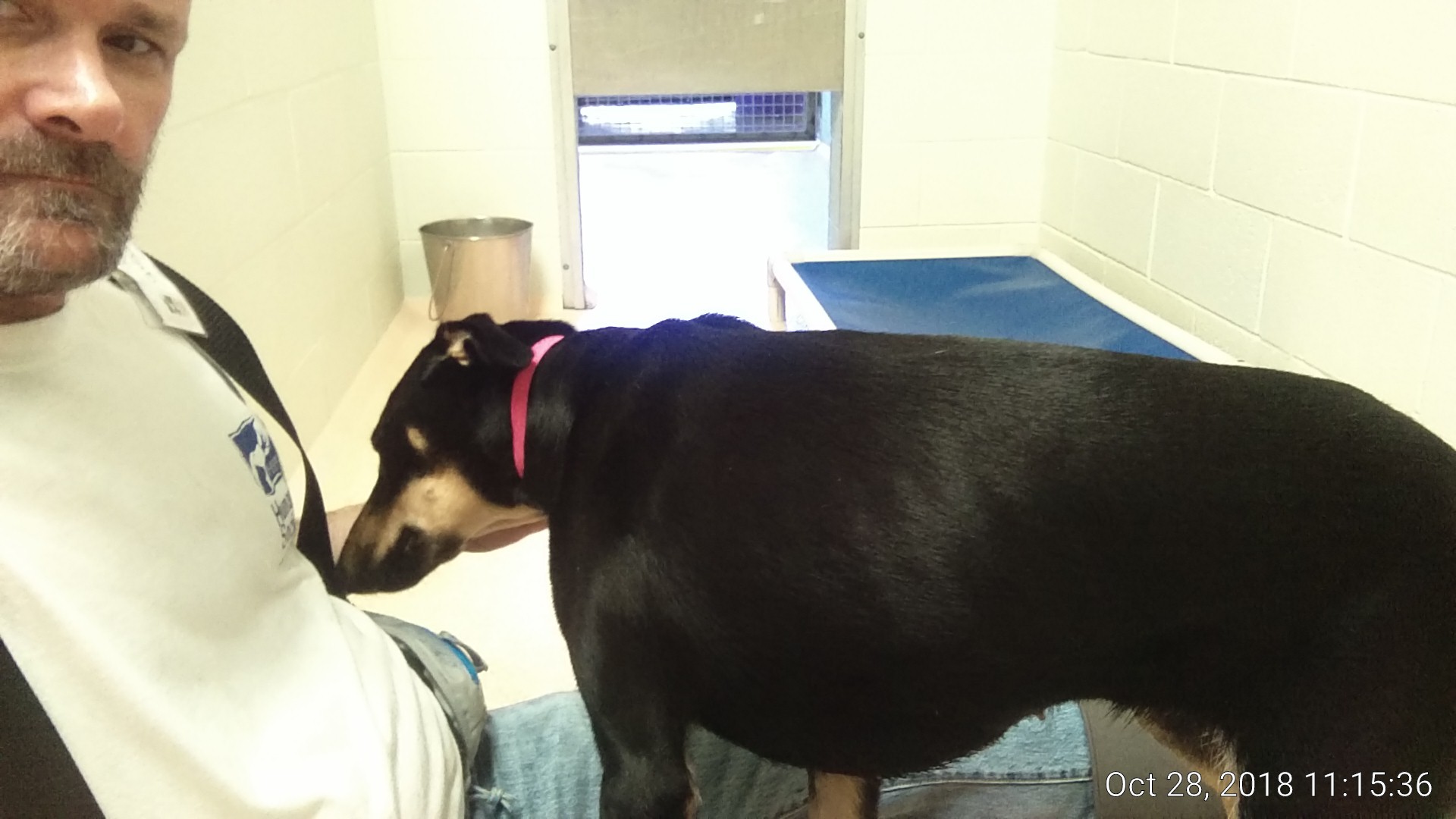 There is also a young male Doberman/Husky mix I sat with named J.D.  He is hard to take pictures of: 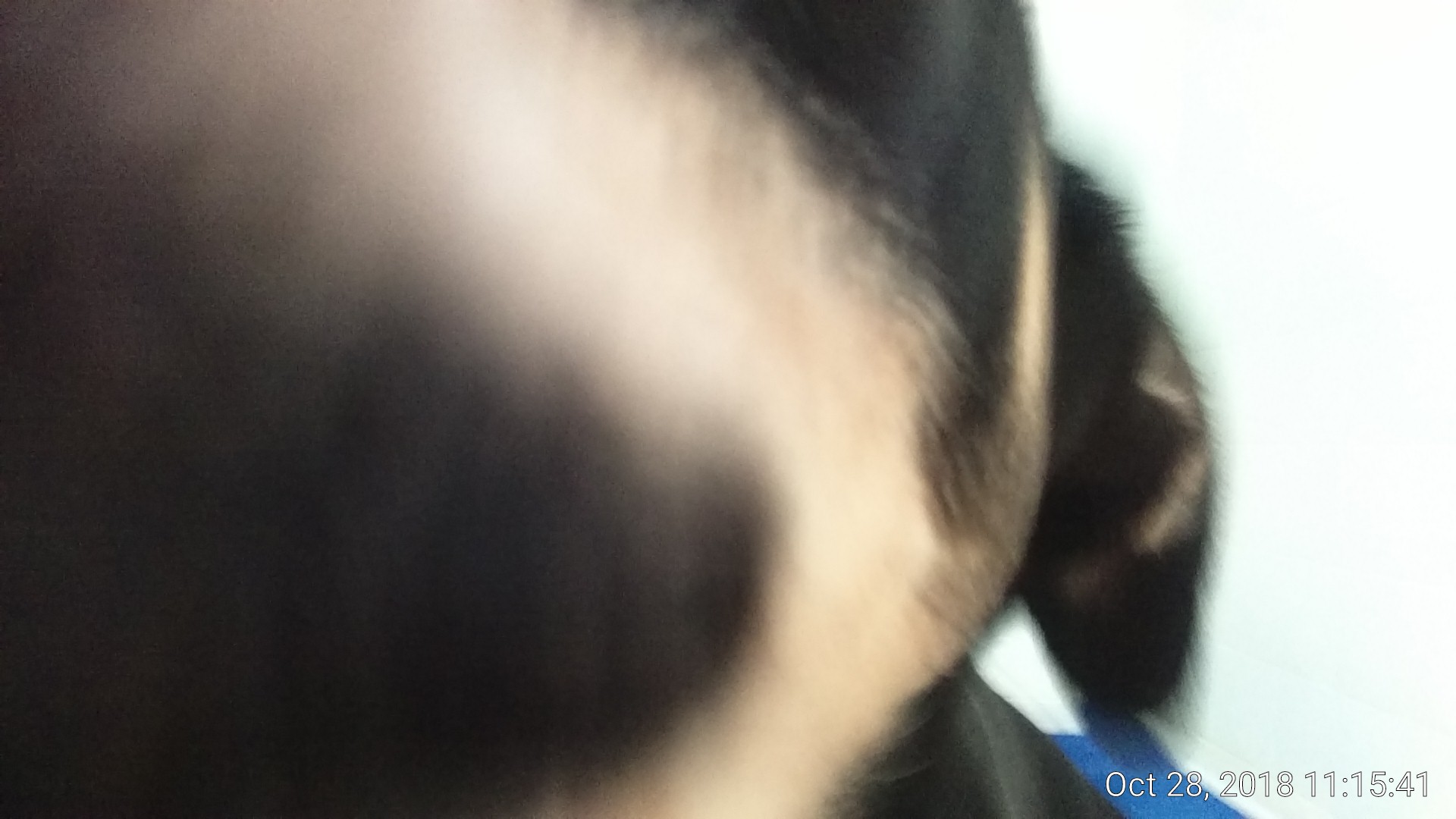 This official pic of him should help illustrate the challenges involved:

He’s a wiggly dog, amazed at the world and plays energetically on his own even if no one else is around.  I’ve seen him on his back with his head under the bed, front paws pushing the bed into the air.

At one point he was wrapped around my leg (like a cat might), only with his butt in the air and his head tucked up underneath him.  Somehow he transistioned into an upside down position (still wrapped around) with all feet in the air waving like flags. I wonder how many calories he burns per day.

Here is this week’s time with Atlantic: 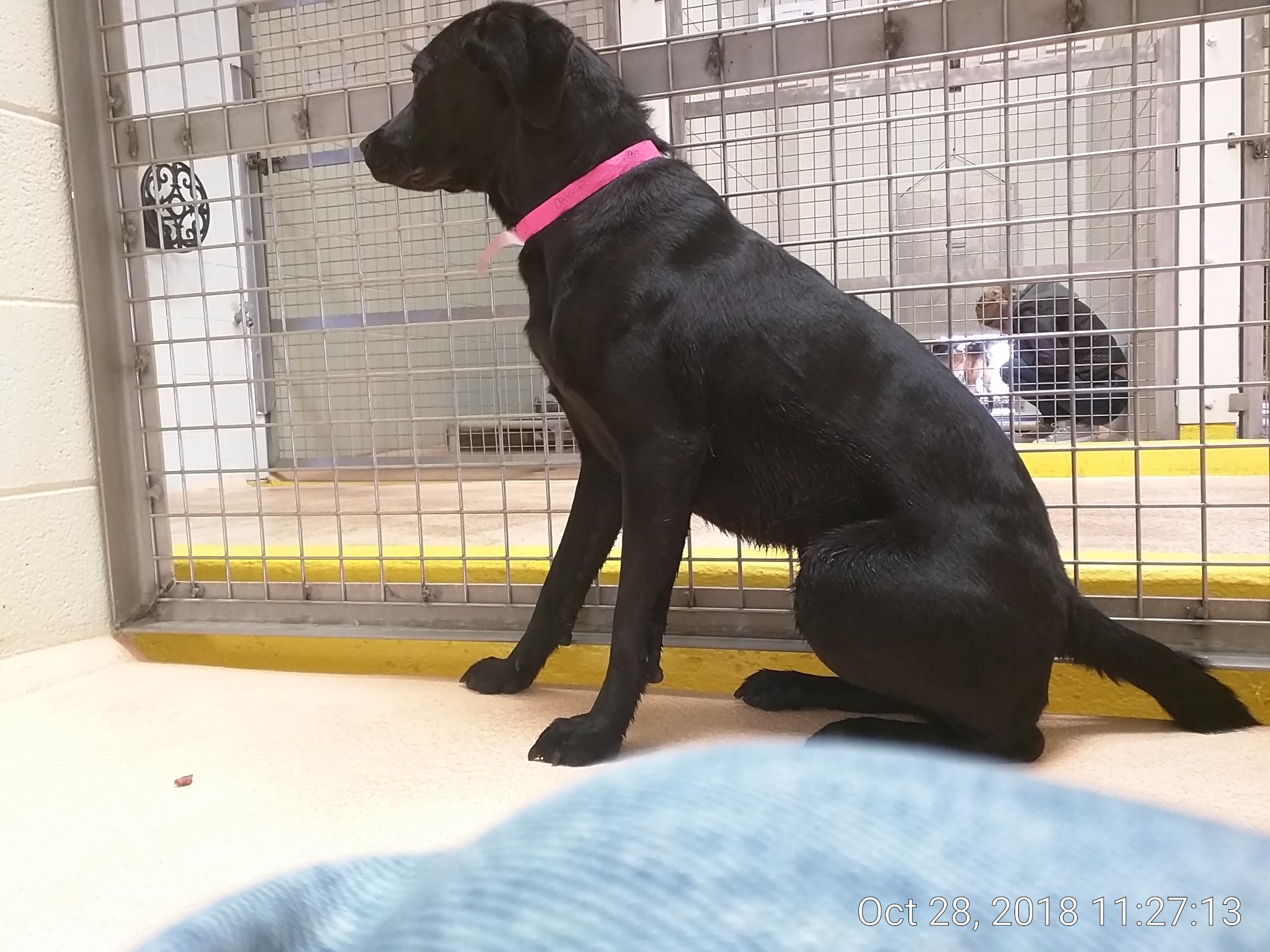 She is within touching distance but still very tense.  I moved around a bit to show her that motion does not imply danger.  And I touched her a few times for the same reason.  Her whole musculature was rigid, taut, even her belly and neck.  It must be exhausting.    She’ll come around….

On to the medium pens.  This is Slurpee;  the name seems appropriate though I can’t say why.  He is a Sharpei/[lab?] mix, very relaxed given the environment. 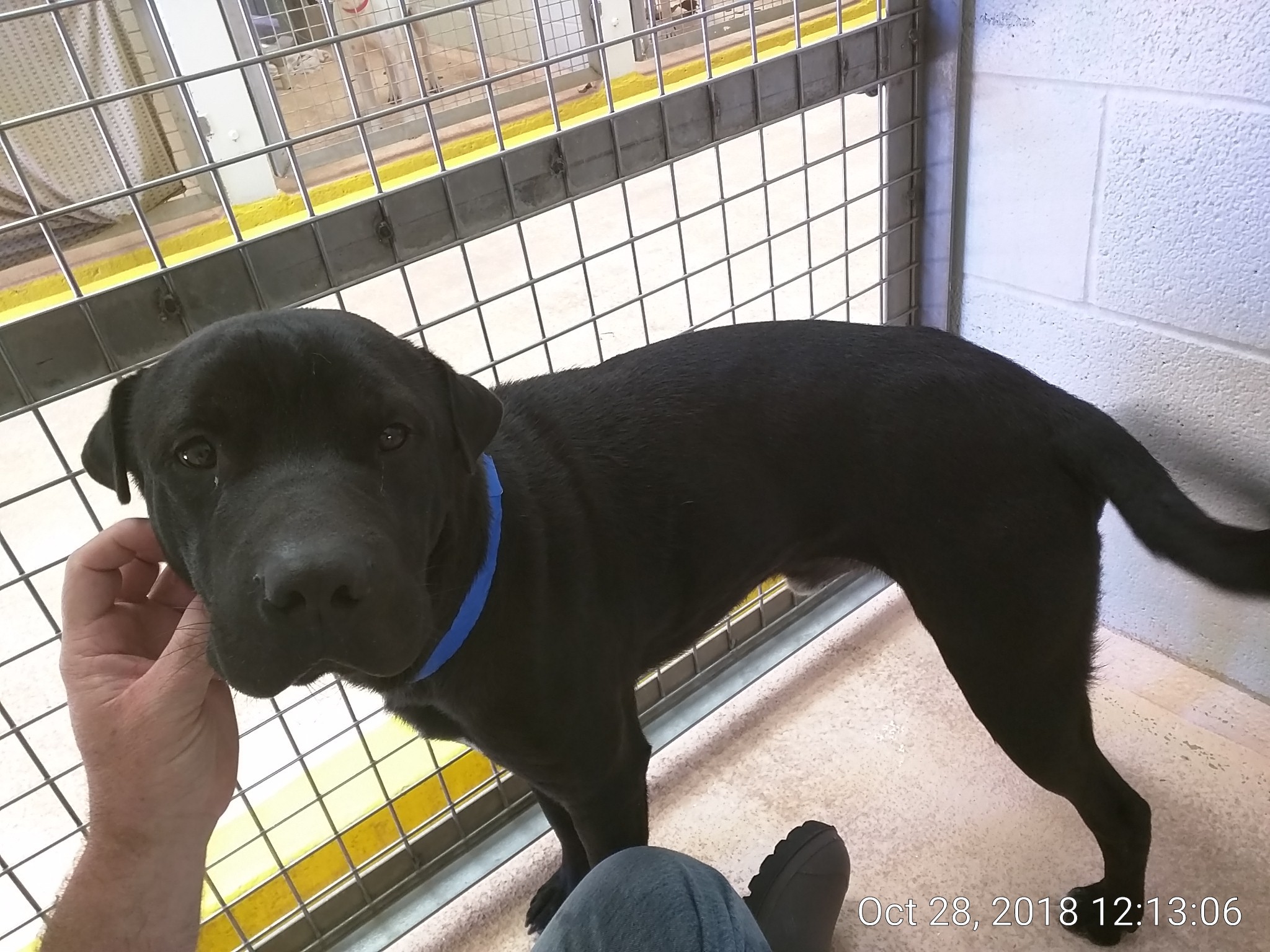 Vela is a pit/[spaniel?] mix. She quickly responded to guidance about keeping her feet on the floor: 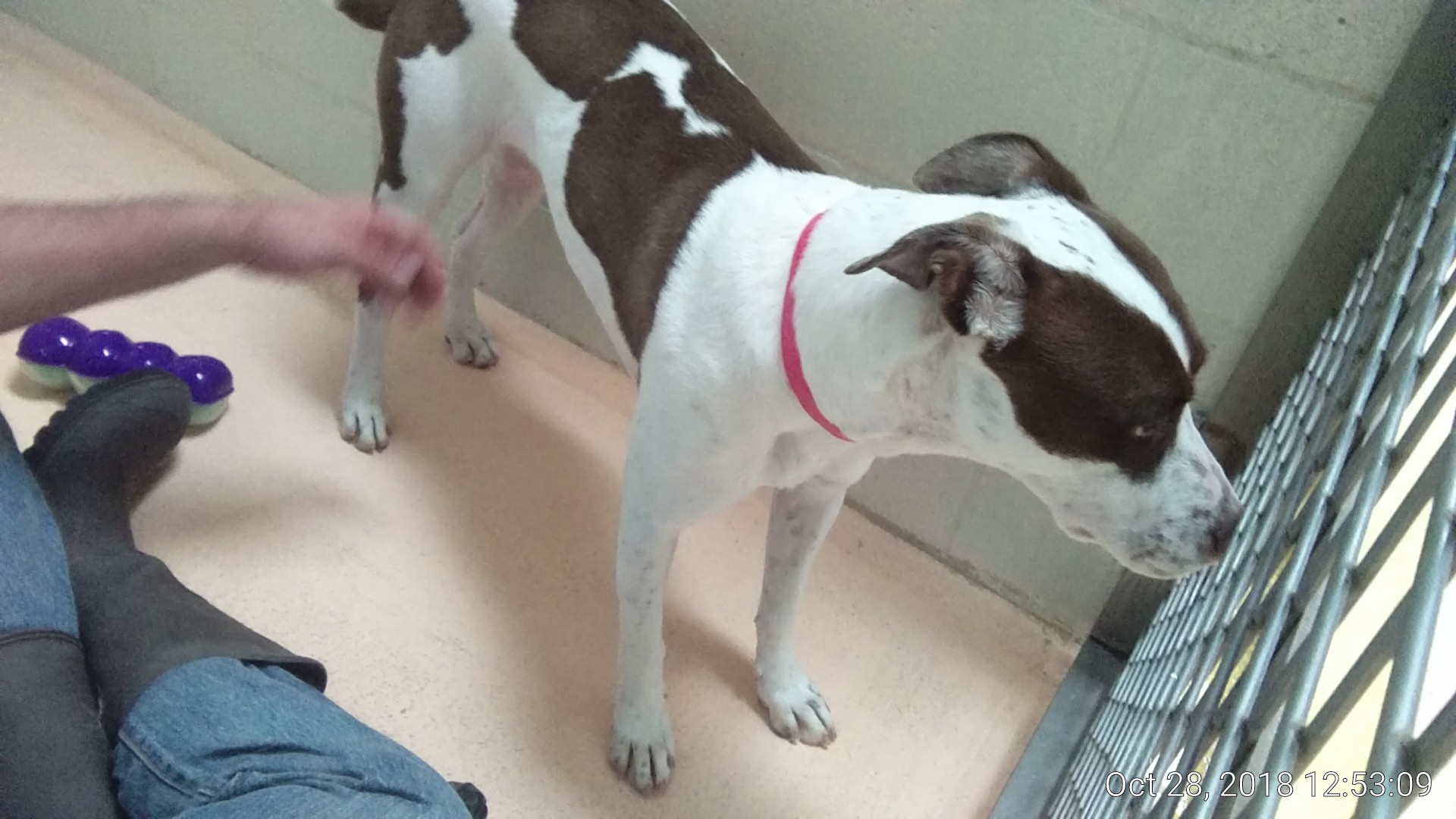 She wasn’t intereested in teh chew toy distributed by staffers while I was in the pen.   The toy looked like a good one to me but apparently I am no expert.  Note: the toys are collected daily, washed, sanitized, and redistributed.

I’ve written before about how poorly I fit in the small pens.  I walked through anyhow;  maybe there was some scooping or something I could do from outside the pen.

I saw Midnight, a tiny black dog of some kind.  When I passed she looked lost or something. Not scared, or nervous, just confused.  I figured it was worth the contortions to see what the dog was up to.

I started wedging myself in, and before I got my butt fully on the floor she had already climbed into my lap: 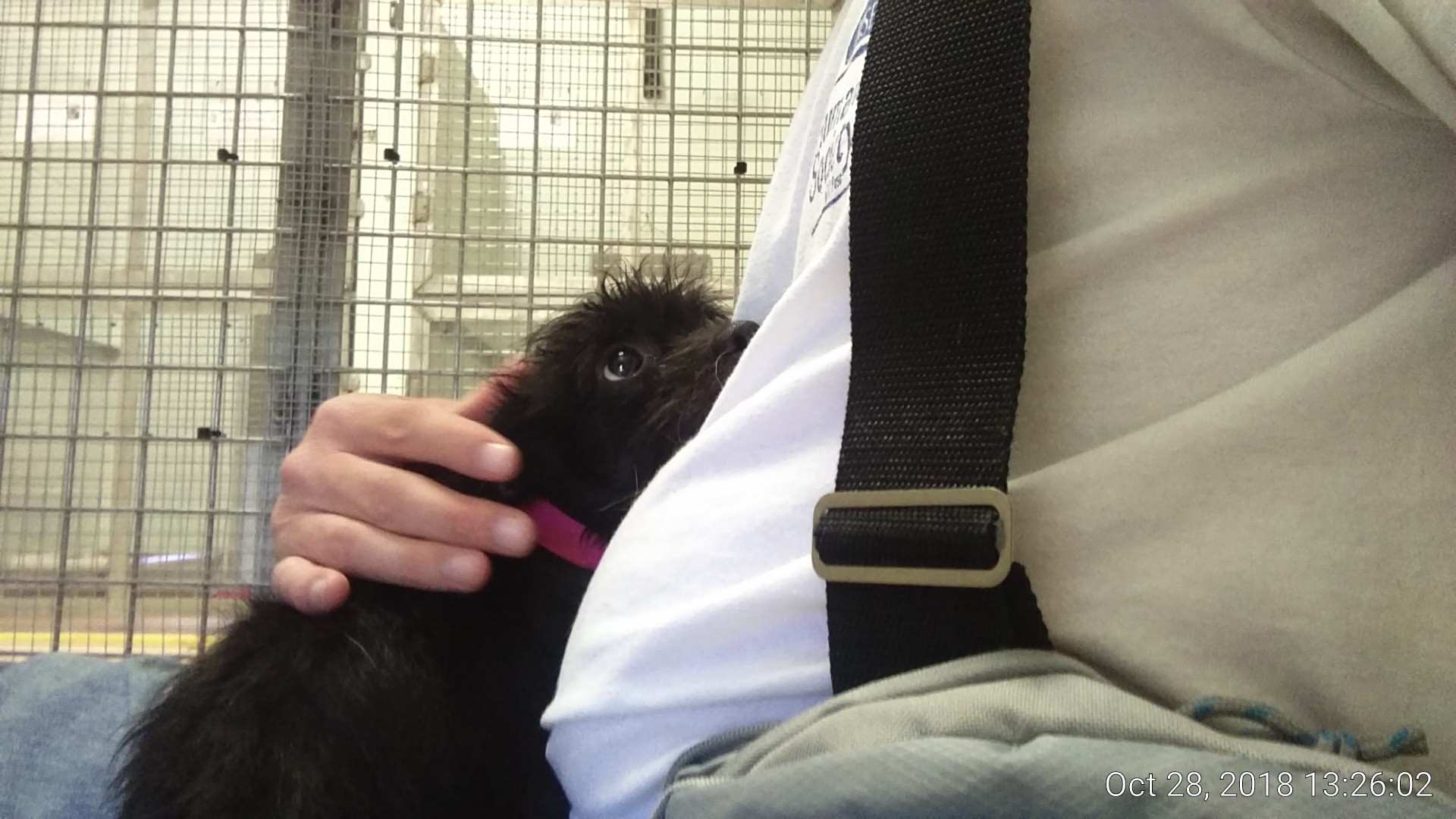 I prefer big dogs but this quarter pounder was an exception.    She was quiet, composed,  and delicately pawed me if I didn’t engage her for a little while.  If you didn’t see her do it you might not know it happened. 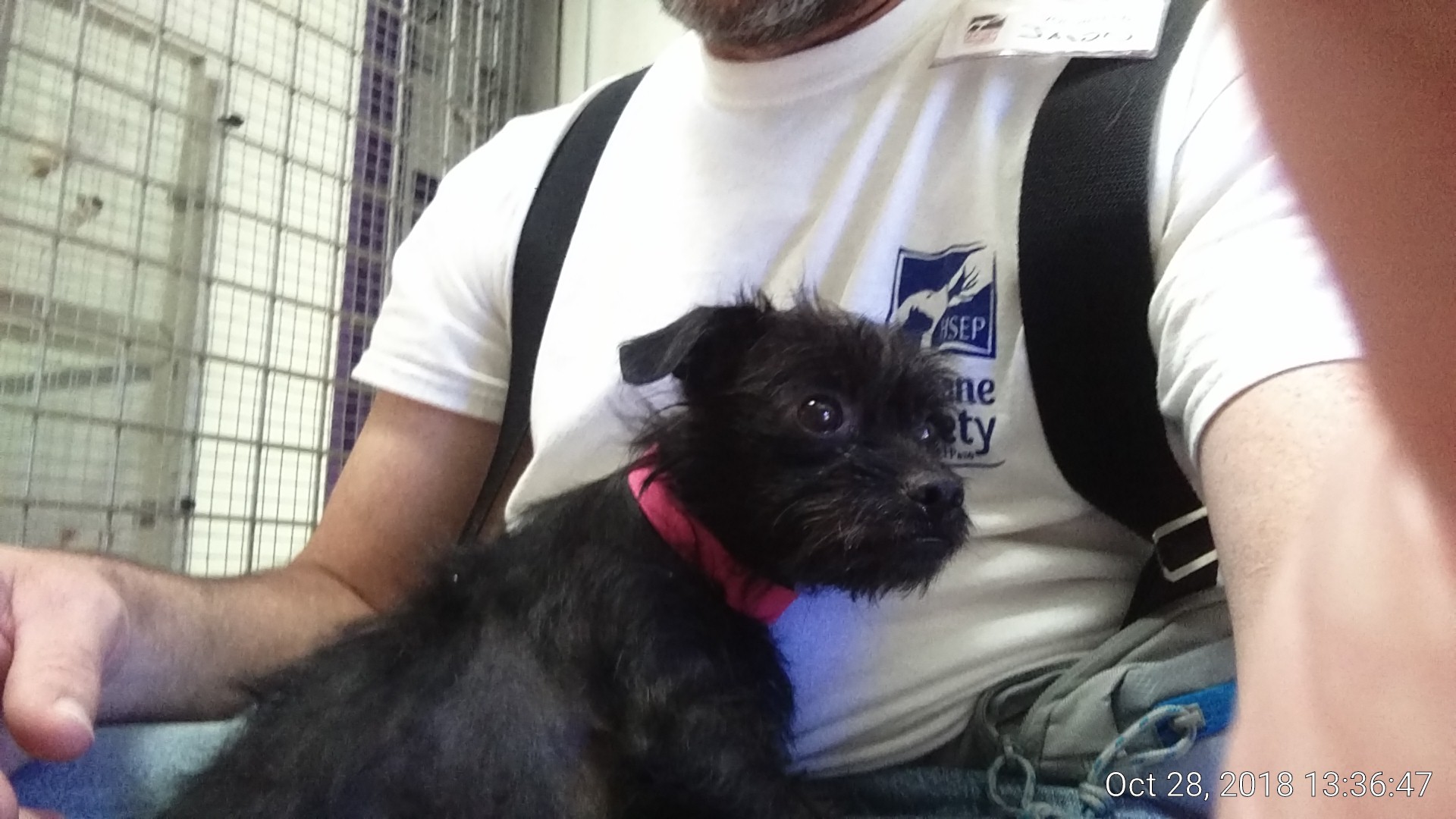 Some dogs have behaviors baked in after generations of selective breeding – retrieving, guarding, etc.  This doggle is a companion, a literal lapdog.  She is compelled to sit on a person, and to do so calmly and contentedly.  Being on her own in a pen must be utterly alien to her instincts and experience.  No wonder she looked lost.

I wasn’t intending to stay, as I was already tired and hungry and sore from sitting on concrete pen floors.  But I sat with her a long time so she could lay down, relax, and sleep for a while on a friendly lap.  This is a terrific dog.

The staffers warned us in training that volunteering at a shelter is the best job that will ever break your heart.