I mentioned it in the previous post but hadn’t busted out the kill-a-watt at that time. The following values are as read from the KAW and do not include inverter losses.

My typical use case stealthing in ELP was Fan III + evaporative cooling for 13.5w, although at night I might turn it down to Fan 1 (5.5w with evap). Highest drain will be Fan V + evap + oscillation for 32.5w.

Power consumption is low because the phase-change of water is doing the work. Since I live in the desert and ventilate constantly I’ve never seen interior humidity rise above 24%, still below the comfort level of many Normal People.

In light use (a couple hours evap on Fan I) it might suck up 1gal/day. In maximal use (24 hours of evap on Fan V) it might drink 5gals/day. When I was stealthing in El Paso in the summer the average was 2-3gal/day since 8+ hours of the day were spent in the office (which also had evap cooling).

I don’t plan on staying in hot places in the summer running it on max all day.

It is currently 75F and 16% RH in the van. I turned the evap + Fan V and within 60 seconds the air blowing out of the unit had dropped to 62F, too cool to stand in front of comfortably in my t-shirt. I suspect the entire pad didn’t get wetted in that amount of time and a bit more cooling could be had but I was chilly and turned it back off. Interior humidity did not increase, but then again the Maxxfan was already doing its thing.

After doing the test above I looked up some charts like this one from the energy.gov: 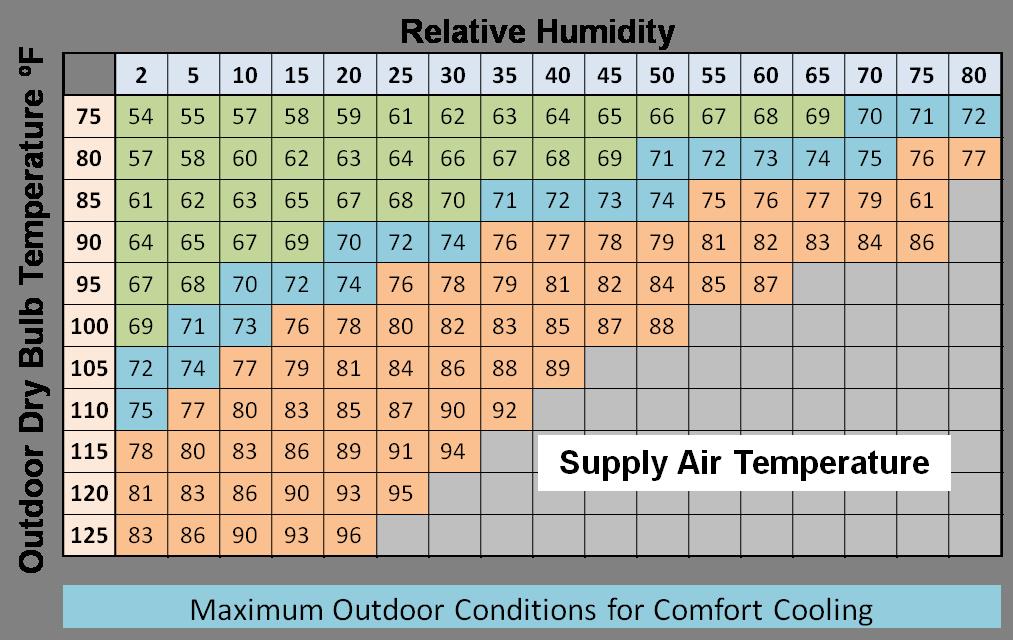 So maybe a further drop of another couple degrees would be possible had I not chickened (or goosebumped) out.

It’s no air conditioner but it makes a huge difference spot cooling (blowing right on you) in the desert, and uses 1/20th the power of a window unit. My quick googling suggests evaporating a gallon of water pulls ~8,700BTU from the surrounding air. It’s not as impressive as it sounds because the need for constant ventilation in “lossy” setups like this to keep the humidity from rising. More $$$ systems use exchangers to cool air without increasing interior humidity, but I don’t know of any van-friendly setups like that.