In a welcome break from recent disasters the solar panel remove/replace went reasonably well. It took about 5 hours end to end and would have taken 4 if I hadn’t lost my stepped drill bits for a while.

The surviving pair of 190w panels needed to come off, so I tripped the breaker and pulled them off. Easy Peasy. They were rehomed later in the day (see below).

Since they were shut off I ran one of the new-to-me 250w into the 10A controller to get some juice into the bank. Fortunately it was enough to reach absorption by ~2pm, although this had a side effect we will see later.

The sad old aluminum runners came off, also easy. Things were about to get tougher.

This part started with a welcome break; the Vantech crossbars were precisely X inches between the front and back bars, which means the bolts would fit right in the every-inch holes in the new runners, and no new holes needed to be drilled. I’ll take minor victories when they happen.

The crossbar bolts are about 1.5” long and so do not pass all the way through the 2” square tubing. I planned for this and figured I could use a step bit to enlarge the relevant holes enough that a deep-well socket could drop into the tube and drive the nut. It would be a kinda-cool hidden hardware thing.

Except I couldn’t find the stepped bits. I looked for over an hour and finally found them where I put them: in the Lowe’s hardware bag with the mounting hardware.

Once I found the bits they worked nicely to open up the hole just big enough for the socket:

Getting the lockwasher and nut down on the recessed bolt was something I hadn’t thought about. I ended up using a bit of a twig stood on the end of the bolt to drop the washer down in place, and used a dried piece of grass to shim the nuts so they would stay in the socket while maneuvering into place. Desert vegetation for the win!

I disconnected the 250w panel powering the van since it was going up; I put one of the pulled 190w on the 10A in its place.

It was not unrelenting fun to wrestle the 65x39” panels up a ladder and onto the runners way up in the air. The wind picked up a bit, which made me nervous. A swarm of flies saw I was lifting panels and came to sit on me. They brought two bumblebees as backup. But once the panels were sitting on top I could rest.

I’d already drilled the holes in the panel frames for bolting to the runners, but a few of them argued and required additional work.

There’s about a half-inch of space between the maxxfan and front panel, and about 2 inches from the rear panel to the plane of the van’s backside. At the highest point (rear edge of panels) the van is just shy of 9ft.

I’ve been wanting to play with serial strings, so I wired the 3x 20v (Vmp 30.3) panels in series. I got them wired and the cables ziptied into a semblance of order and came around to flip the breaker and see what the mounted system was doing.

The 250w (and later 190w) panel had gotten close enough to Vabs that we were in Absorption by the time I looked, and current was falling off. I disconnected the 190w panel on the ground added 150w of load (crockpot) but that wasn’t enough to get the controller to run full blast:

Rated Vmp would be ~91v , and probably closer to 80v after temperature derating. But here we can see the controller moving Vpanel up to 95.56v, meaning it’s trimming power to meet less-than-maximal loads.

Two more observations: around 5pm 153w was needed, and Vpanel was 101.63. Then clouds blocked the sun (no observable shadows outside) so the controller set Vpanel in the low 80s for max power briefly (158w, 21% of rated).

Earlier in the day a skoolie family with kids and dogs pass through and set up camp down the road. There are other rigs in walking distance but the skoolie 1) had no obvious panels; 2) would be likely to need a lot of power; and 3) would have a place to store the big 190w panels.

I walked down and offered them the panels if they’d come pick them up. The patriarch said he had 100w but had been looking for more to run a fridge and other gear, and would do the carrying. Win-win. He came down later and took them away so I didn’t have to store them in the van until I found another taker. 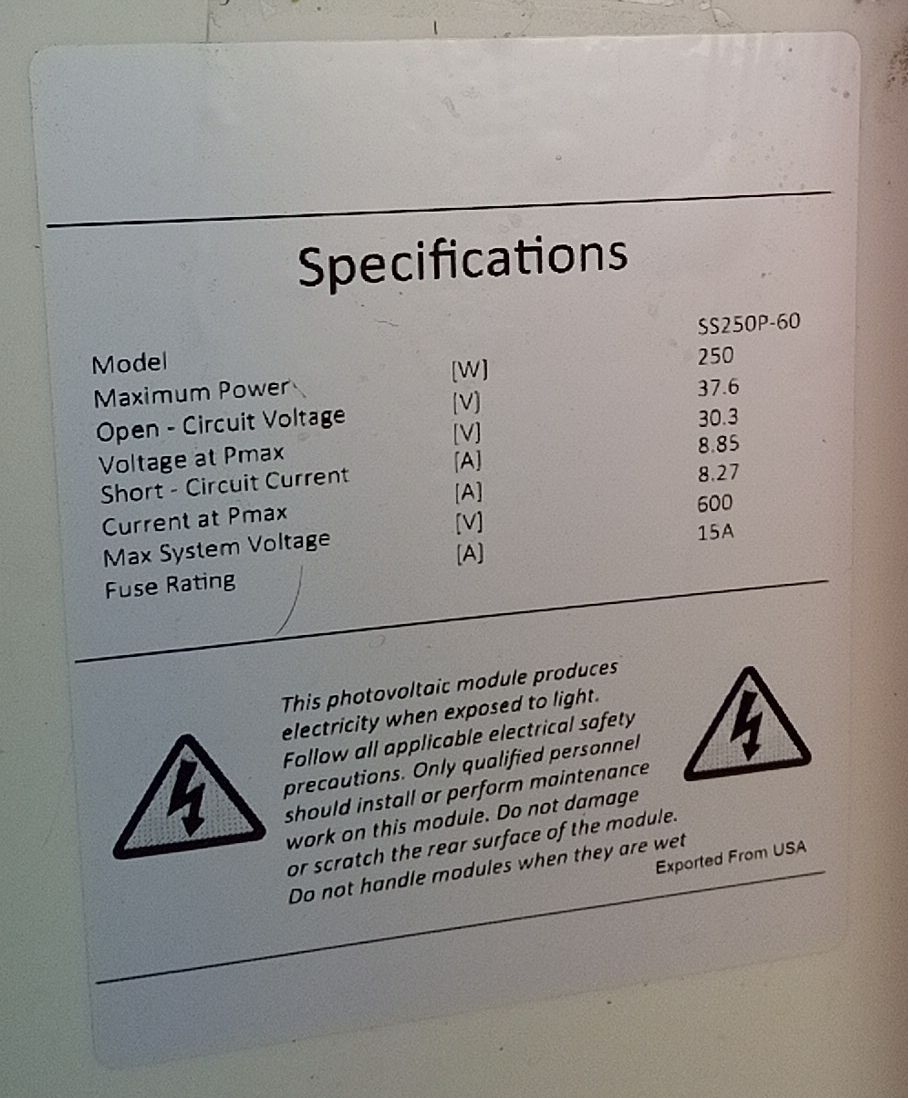