Stealthed in an industrial area last night, then got up and headed toward the nearest city park. Made coffee and took Muffin out for a morning walk. 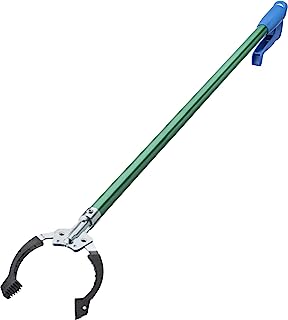 As usual when walking in green areas we took a bucket and grabber to make litter-picking easy. It’s how I “pay” the locals for my use of the park, and requires no additional effort on my part. Win-win.

Did half the park paths and returned to the van to make breakfast. After we both ate (me == oatmeal w/raisins, muffin == kibble) we went back out to walk the rest of the park. We were walking the most distant part snagging litter when I picked up this oddly-colored scrap of paper: 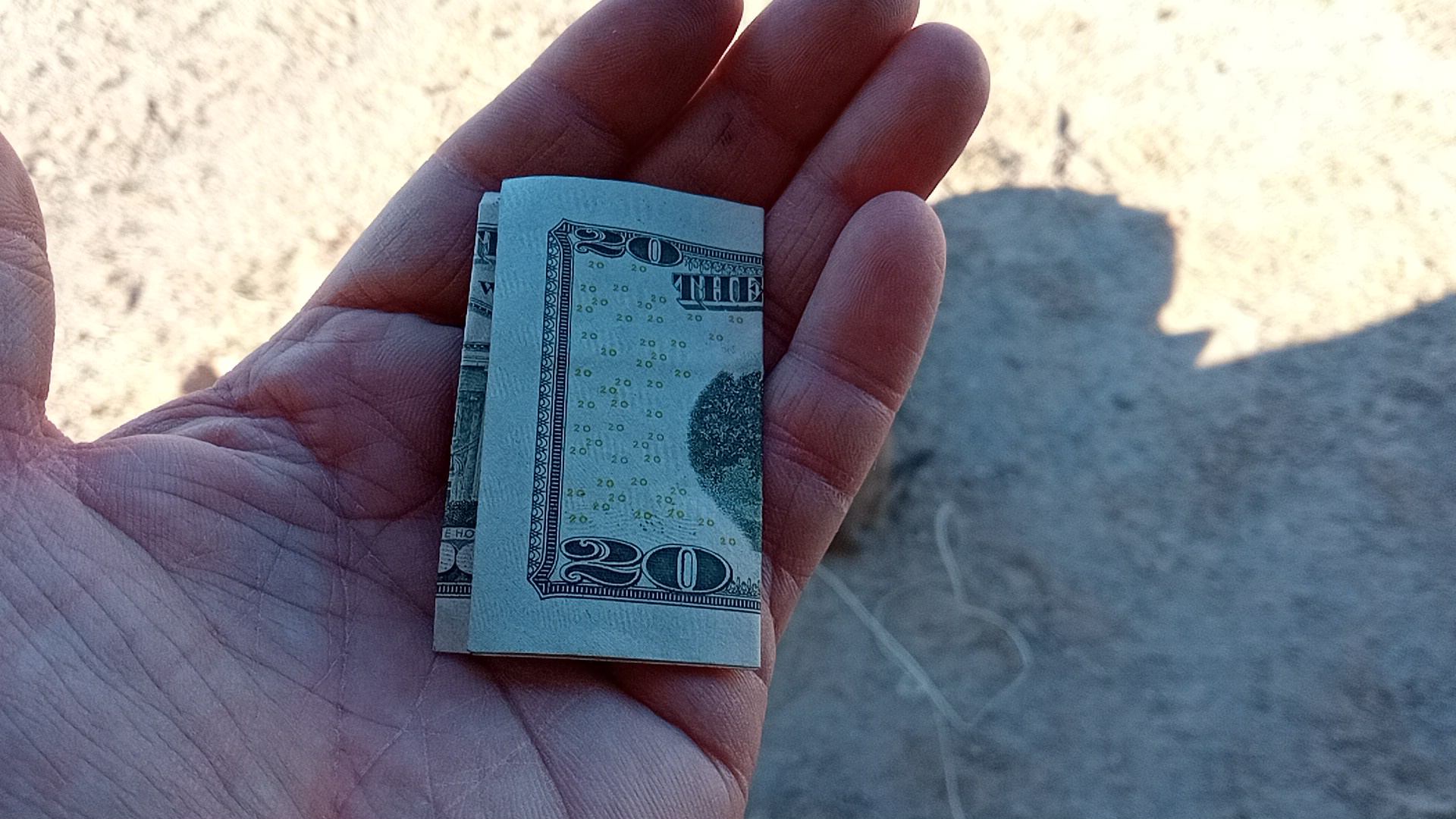 I looked around to see if anyone was around to have dropped it, but Muffin and I were the only creatures walking that part of the park. I’ll use it for a shower and laundry when I get back to Q in another 10 days or so.

Got back to the van and got a text message the General Delivery package was ready for pickup. We bopped over there and quickly picked it up.

I put away the sumatriptan, tossed the4 Maxxfan parts in the passenger seat, and pulled out the delayed stimulus check. Ally’s check deposits are done from the app or website, ‘though this would be my first attempt at that. Quick and easy.

When I looked at the map before I though American Girl was in AZ. It’s over the border into CA but I went anyway. The spot I picked was quite near a tailings shaft. Can’t really tell from here but the mining timbers are obvious on the far side: 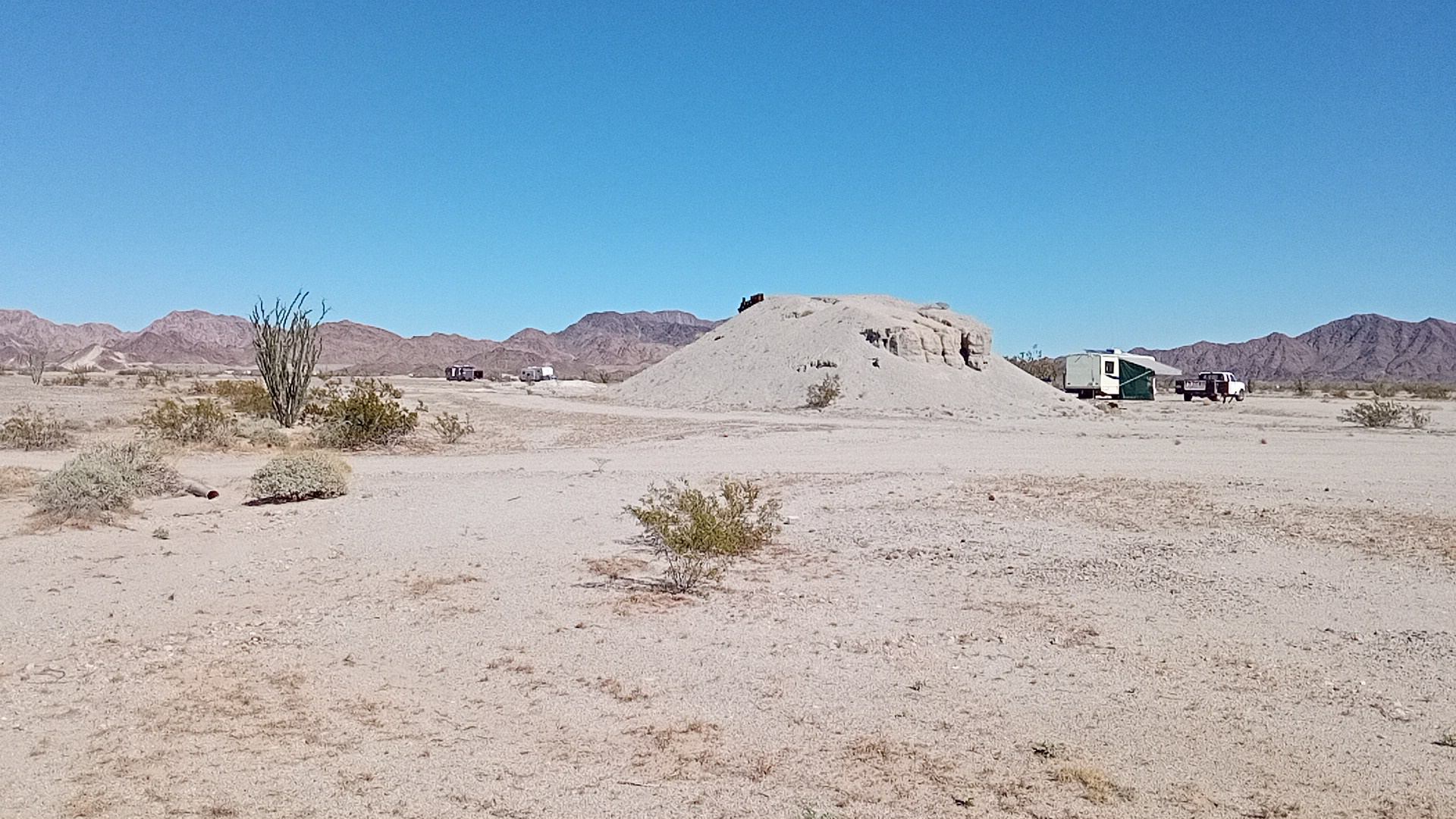 This spot is right on the edge of the BLM area – a notch to my south is private (mining) land. Haven’t walked any of it yet, but will take Muffin on a short jaunt after dinner.

The instructions are made for repair from above, but I’d given away my ladder and not replaced it. It can be done from the inside with some patience and a very stubby phillips driver; I had the former but not the latter. I got it about half done and stopped until I can get that inconveniently-placed screw out and it tempted me to block the snorkel in the UP position.

I think I’ve mentioned this before, but:

I found a chunk of foam that should block the snorkel UP temporarily. I have the repair parts to automate opening/closing again, but if I don’t like that feature maybe I shouldn’t fix it. I’ll stick with this temporary fix for now, look for a better-fitting block, and finish the repair later if/when I decide I want that.

One of my goals for this stay is to wire up the test board and do some panel/controller testing. I found some thin flat pieces in Kool Corner and started laying it out: 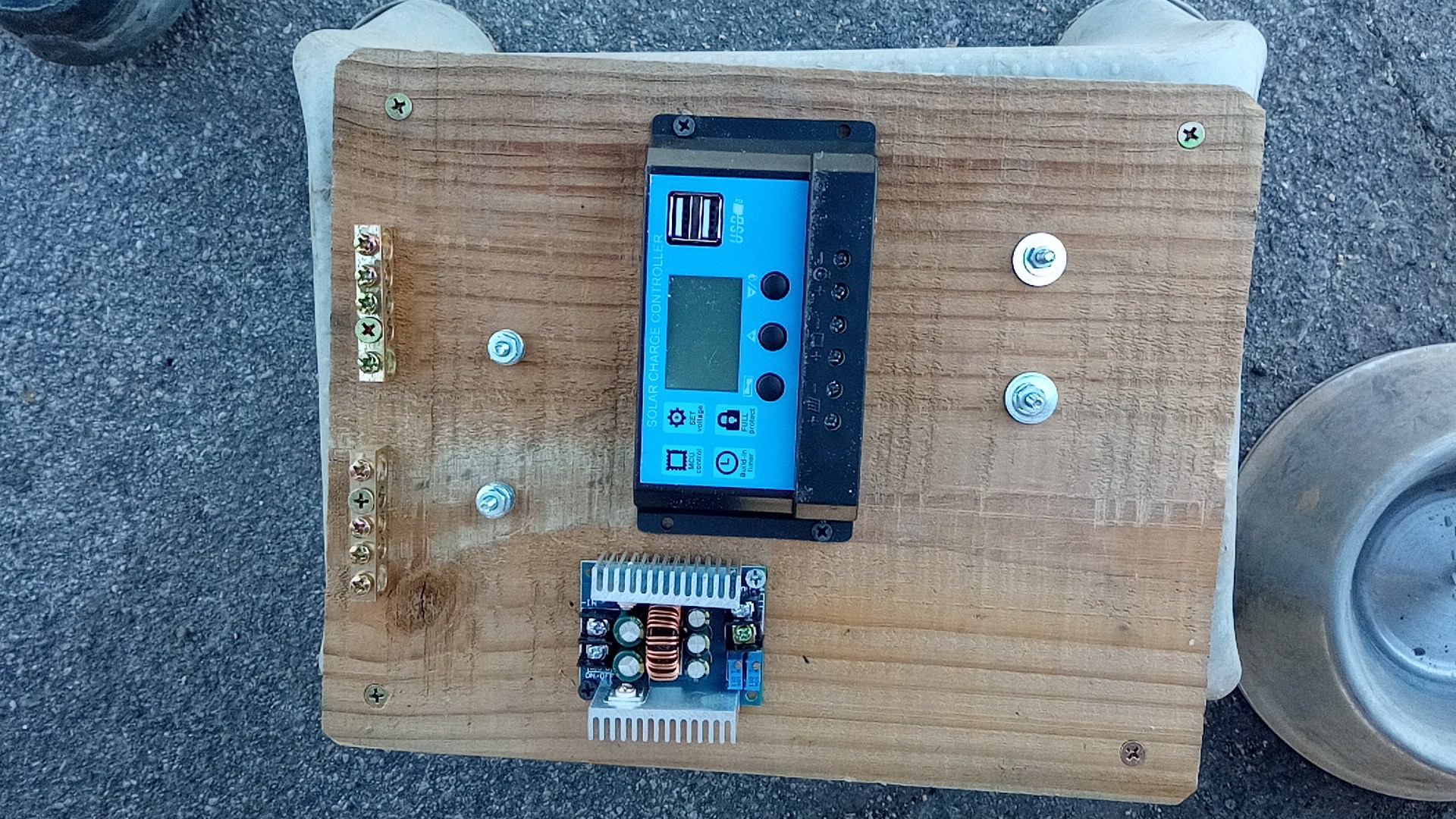 Power comes in at the ground bars on top (left in this pic). Using those bars because they have different size holes to fit the fat panel wiring and normal wiring. The bolts make attaching eye-terminated wires quick for fun and science. The device on the left/bottom is the buck which I will use to tune panel voltage to feed the single-stage controller.

I used a stepped bit to do some poor man’s countersinking on the back: