As much as I’d like to credit good planning for being in mild weather, it’s more of a fluke based on average weather patterns. I’m in extreme SW Arizona in one of the few places in the western US with mild weather because it tends to be warmer here in winter, not because I foresaw a terrible cold blast: 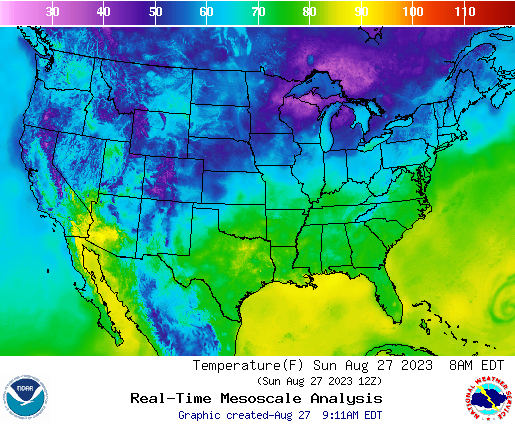 Yuma is in the little notch of AZ that is actually below California.

There really isn’t far I could have run if the cold blast had interfered with this area. There’s a tiny bit of red in extreme southern CA in the San Diego / Imperial border area. (see weather map above). In a non-Covid world one might make a dash down through Baja.

Feeling pretty good now, walking 95% normal. Still some discomfort reminding me not to go on any prolonged hikes for a bit longer.

Did some walking along the canals yesterday, with Muffin maniacally leaping in/out with abandon. She likes to wade but doesn’t like the water deep enough to touch her belly. This is another benefit of the retractable – she can jump in the water without my having to be directly on the bank.

I heard a strange aircraft noise in the distance and stopped walking to watch it approach. It had definite rotor-beat like a helicopter but that aspect was muted, and for the most part sounded like a big/slow airplane prop.

It turned out to be a V22 Osprey, one of those tilt-rotor thingies. I’d never seen one in person before.

One of the pleasures of camping in the southwest is getting to see and hear military aircraft. Listening to fighters fly nearby is like hearing a top fueler at the dragstrip; not just a quantitative difference in sound level but a radically different quality of sound. In both cases performance is foremost and the niceties of noise control are a non-issue.

NOTE: while I was writing this up there were 4 more Osprey passes. I couldn’t tell if it was the same one or not.