We poked around and found the West Side trail, beautifully etched into stones at regular intervals:

Muffin does a pretty good job of following marked trails:

We followed the trail until we got to this point near the base.

I thought I could see a trail going up and one going to the right but there was more bare rock so it wasn’t definite. I also hadn’t planned to walk to the summit and the going looked dicey. I looked at the pdf when I got back and this was not the formal trail.

That picture was taken from the Vee about 1/3rd from the right in this pic:

We started around clockwise. This is the view from the north:

The ground was hard elsewhere but the north side path was in a creek bed with gravel. Slog, slog.

We passed a Jeep that was parked on the NE side, about here:

he was to the right of this frame

I didn’t put 2+2 together because I still thought the trailhead was on the other side.

My plan at this point was to see if we could cross the smoother part on the left side of that pic and rejoin the West Side trail and return. Muffin was starting to slow down and I could feel an ominous twinge in my busted ankle. Not enough to turn back, but a reminder that I have limits.

I saw a path going up that way and followed it, not realizing I was on the official trail. Stopped to take a pic of the ocotillo in bloom. You can see why it’s sometimes called candlewood, as the blossoms look like candle flames: 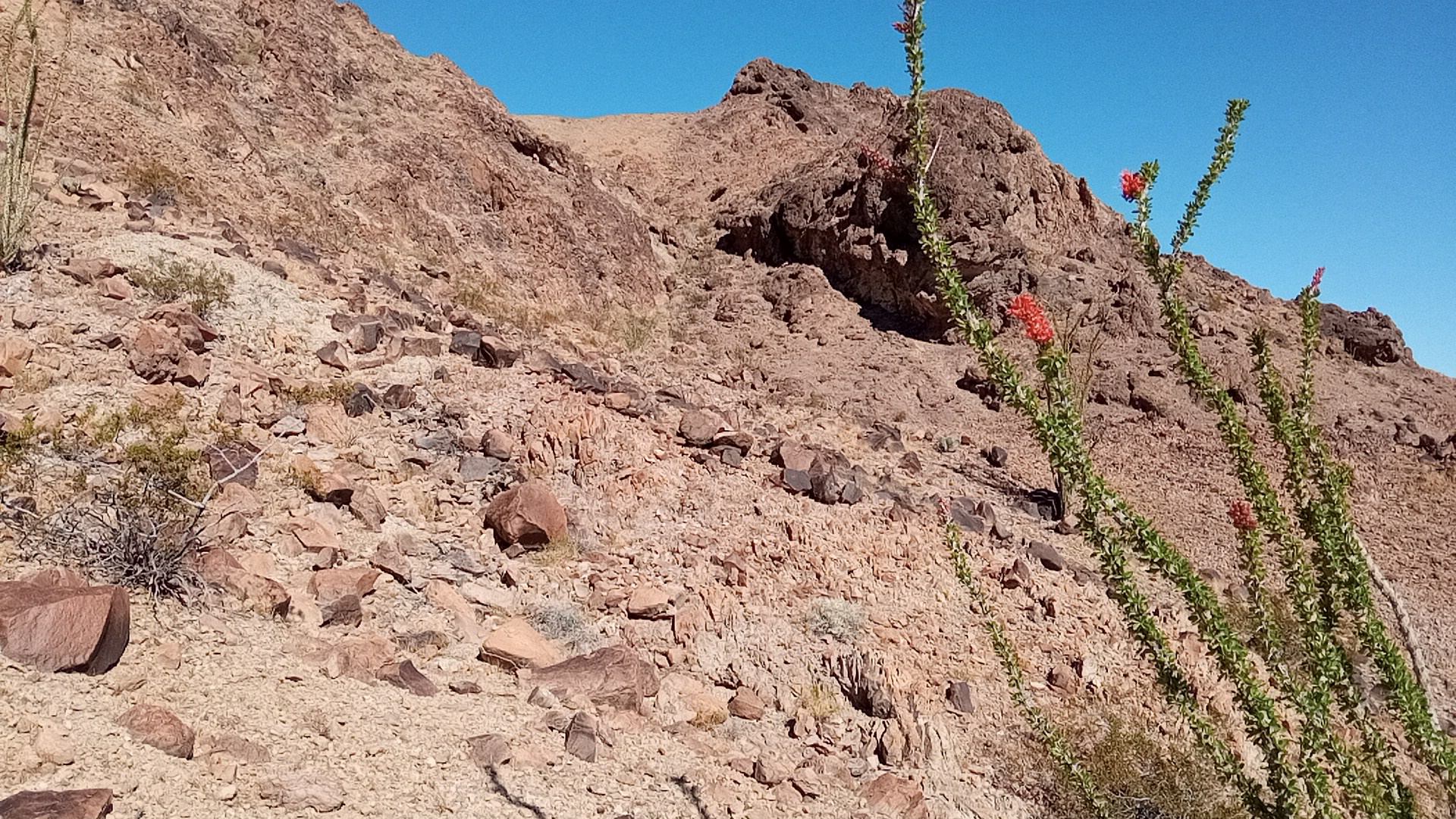 I kept going south, looking for a crossing. I got to a spot where paths converged and judged I couldn’t go around further to the south. I looked up and it looked possible to walk to an apparent summit from there but I saw no firm evidence of a trail. And I had to think about getting back. This was the turnaround point and uphill is to my right:

In retrospect it appears that I was standing about 100ft up from the Junction point in this graphic, where the first set of upward dots are:

from http://virgil.azwestern.edu/~sd1/2YC3%20199th%20Conference%20Website_files/YumaTrails.pdf. Pretty sure this view is from the SE not SW (see below). Maybe “orientation from” has a meaning I am ignorant of.

So it was walkable. Maybe not safely by me after the walk in, but that was the “trail”.

Note the brown splotch in the upper-right corner with the light line heading off to the left. That’s Kool Corner and the irrigation project flowing just east of it.

On the way back a couple of jeeps came by and the drivers made sure doggo and I had water. We were fine, and they trundled on at maybe 2x our walking speed.

The wind had picked up again by the time we got about halfway back so that part of the hike was less fun. We got back, Muffin flopped over and I was grateful to remove my boots.

hike started in upper left and ended at the bottom edge roughly at the midline. The marker is the trailhead.