{note: this was started on Nov 21 and held in Drafts while I tried to massage it into something readable}

Woke up this morning and the sky was clear blue; the sun was fully over the low hills to the east. Should be a good day for solar harvest as soon as the sun gets a little higher in the sky.

The house bank was sitting at 12.1v under normal background load (28w) so I decided to set up the phone to record what happens when alternator charging is applied to a 50% DoD lead battery for a short amount of time.

Alternator charging is expected to max out a deeply-cycled lead battery’s acceptance rate when first applied. For 220Ah of flooded lead acid that is something like 44A (C/5, or 220Ah/5). Measured acceptance was 45.15A, very close. 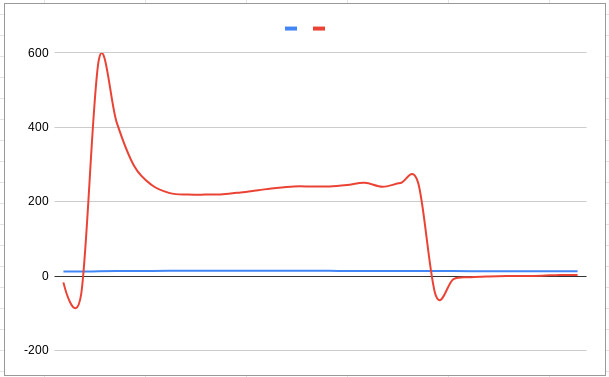 From here on out we will deal mostly with watts of charging, as it is more informative than Amps in CC charging when voltage is rising.

Charging watts drop off dramatically in the first 60 seconds. What’s going on? Theories:

If that’s the case, what explains the big inrush at first? Voltage delta, as we said. But I also suspect the inrush current difference between max acceptance (45.5A) and what the alt is offering up (20-30A?) is the starter (SLI) battery. Remember the SLI is a thin-plate, calcium-doped lead battery optimized for quick dumps of power (starting) and quick reuptake of power (charging from alternator once the engine is running).

By definition, the voltage-sensing relay waits until the SLI side is 13.4v before dropping the hammer. At that point the 12.1v house side is connected to the 13.4v+ SLI/alternator side. Inrush.

Further evidence for the insufficient alternator current at idle theory is how flat the bank’s acceptance remains after the big inrush. Normally acceptance would drop off as a lengthy (multi-hour) slope. The flat line suggests the bank wants more. I could test this some other time by increasing RPM to see if the charging rate goes up (I suspect it would). {NOTE: I tried increasing engine RPM the next morning under similar conditions and acceptance did not change. I guess it is either battery demand or alternator heat-related attenuation at play}

The house bank rate does trend up slightly over time; perhaps the SLI battery has recovered from the outrush and is accepting less? Solar harvest was also steadily increasing as the sun got higher.

dips on the graph

Were you wondering about the little dips on front and back parts of the power graph? The first dip is me running the water pump to fill the kettle for coffee and dog bowl. The last dip is something in the Promaster dash that pulls about 50w for about 30 seconds after the engine is turned off. A relay clicks and the 50w load disappears.

I used two methods here: some math and a not-particularly-granular coulomb counter. I expect them to be ballpark but wouldn’t stake my life on either one.

The coulomb counter on the shunt measures only whole amps, so this one will be even less precise. Amps counted over 10 minutes was 4, so 4 * .91 = 3.64Ah replaced in the bank.

If we split the difference we get something like 3.25Ah replaced in 10 minutes of charging.

Note: AGM tends to be more efficient in Bulk, like ~95%, and due to lower internal resistance would likely have replaced 6.5Ah into the bank.

This is what the bank voltage looked like before, during, and after alternator charging: 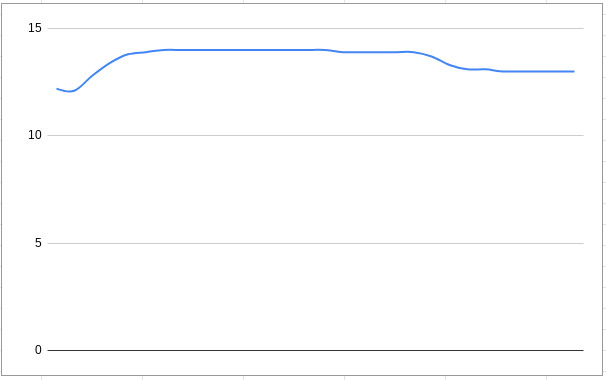 Here we home in on the steps between 12.1 and 14v to show how the rate of voltage rise tapers off 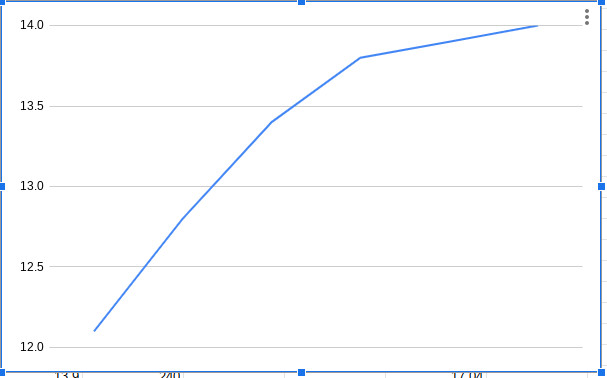 And remember we are basically just getting to a high float here; the rise to 14.7v Vabs would have been even more incremental had the alternator been able to do it.

By the end of the 10 minute blast solar was making ~30w and the alternator 252w, or 8.4 times the solar harvest. This would be the equivalent of 290w of panel at solar noon.

An alternator can deliver a ton of power when a house battery is deeply discharged, but the power drops off quickly as battery voltage rises and internal resistance increases.

Alternator charging by isolator can quickly bring lead batteries up to Float-type voltages the alternator makes. This is insufficient in voltage (absent DC-DC charging) and duration to fully charge the house bank but has important benefits:

Even though the current figures are impressive, short alternator-charging runs do not replace significant amount of Ah because the charging duration is so limited. In our test 10 minutes replaced ~3.25Ah into the bank. AGM might be expected to replace 6.5Ah in the same period.