As I mentioned, the service appt for the xmission linkage was for 0945. I wouldn’t have time (in terms of finding a spot to do the work) for the oil change before then.

Against my better judgement, I asked the service writer on checkin if he wanted to do the oil change while the van was on the lift.  Sure, says he.  My one requirement was that an oil sample be drawn during the change.  I provided the sample kit and left it on the passenger seat.

At 1145 the van was rolled out of the shop but the service writer didn’t have the paperwork yet because the recall work had not been performed.

The recall work itself is trivial and took ten minutes when they finally did it (I watched them).  They pulled it back around.  Nope, the oil guy had installed dino instead of synthetic.  Service writer advised since it was their screw-up they would “hustle it out”.  The van went back to the oil change bay and the oil change tech went to lunch.

Fine, so now it’s 1pm.  I’m settling up and the service writer hands me what appears to be a pepsi bottle and says “here’s your sample”.  Service writer and I looked in the cab and, yep, sitting alone in the passenger seat is the Wix oil analysis sample kit.  The tech notes on the paperwork says:

The Pepsi bottle isn’t a big deal as long as it was clean and dry.  It would be easy to contaminate the sample, though (hence the sealed sample bottle in the kit I provided).

That was an extremely slow, expensive, and poorly-executed oil change, but what did I expect?  Dealers tend to be comically inept.   I knew going into it that it would be expensive, but this is the last oil change before the powertrain warranty expires (5yr / 60k miles and van has 55k).   And I didn’t time to do it myself before the appt.

After so much time in heavenly seclusion it was weird to feel the symptoms of  stress again.  Time to get out of town while my annoyance is under control.

off to Carson City

I headed out to some BLM land east of Carson City.    I waved at the Bunny Ranch on the way in and wondered how Covid was affecting their workflows.  Are masks required during the transaction?

There are a lot of dirt roads on the land but relatively few pull-outs away from the highway.  Most of those pull-outs were full anyhow.

I found a scragglier-than-usual dirt road and headed up it.  From prior experience I’ve learned that easy access spots fill up first.  Found a place but the one tree on that acre would be blocking afternoon sun on the panels.  I pulled up across the trail next to an abandandoned mine: 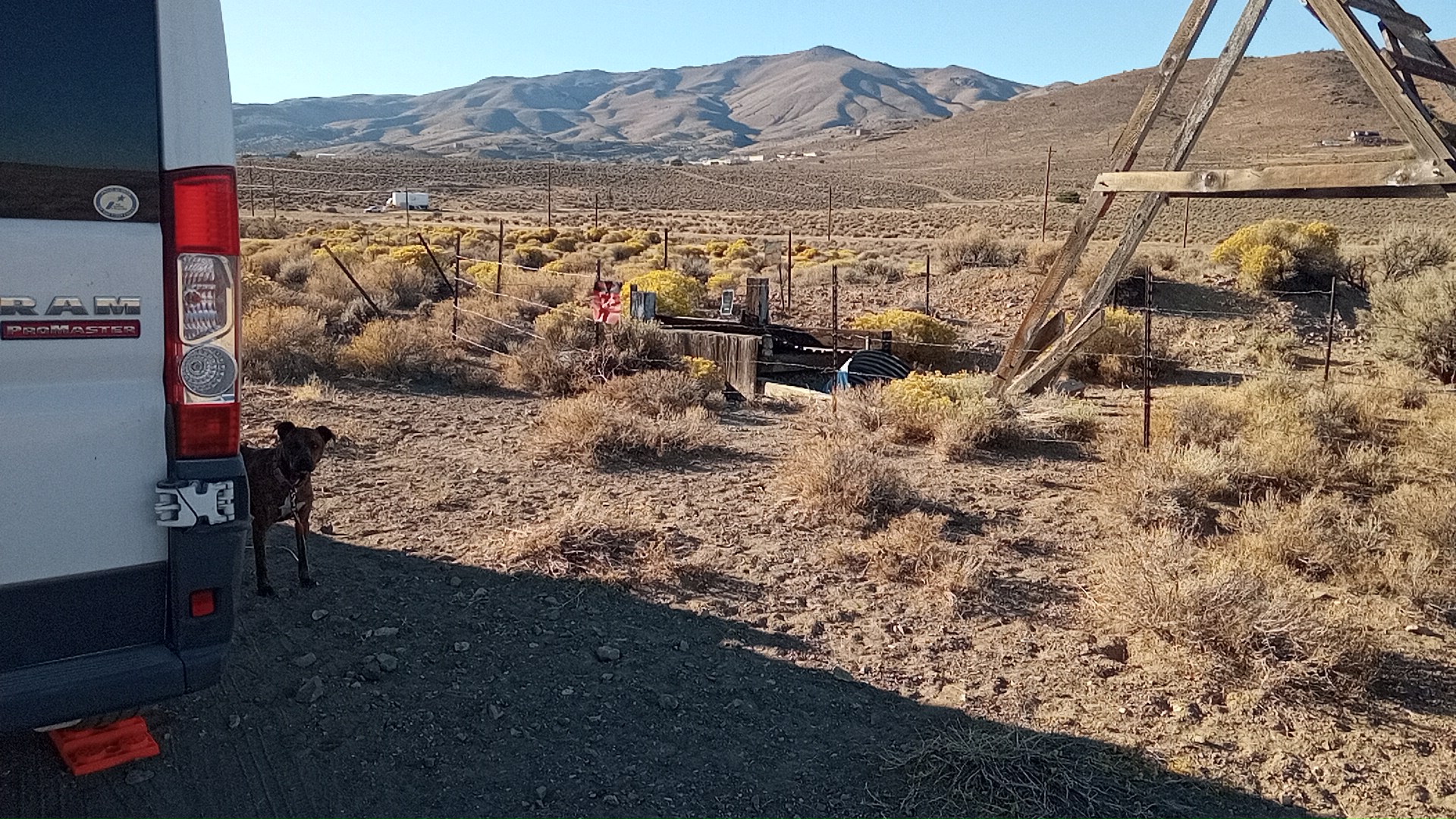 Muffin will not be getting any off-leash time here, because knowing her she’d immediately run into the mine and I would be out of the dog business.