I mentioned earlier that I’d ordered a replacement carry phone.  It came in on time and I spent most of yesterday setting it up.

This phone is terrific for my uses, snappy and well-built.

The last phone that made me this happy was the Note II, Samsung’s flagship of 2012.  Of course, that was an $800 phone.  Full disclosure:  I bought it slightly used (two weeks) from an ATT employee who got it at cost and resold it to me at cost, $225 IIRC.

This phone was $169 new off Amazon and is positioned as a low-to-mid spec device (Xiaomi’s middle-grade phone is the Mi at about 2x the price).  It’s illustrative of how fast technology has evolved.  In 8 years a phone with 2x the processor cores, 7x the processing power, 2x the display resolution, 2x the storage and 2x the RAM costs 80% less than the original.

The phones are quite close in physical size, with the Redmi being a half inch taller and a smidge narrower.  The glaring difference is the bezel reduction, leading to more actual display height.   The Note’s display is 68.6% of the body area and the Redmi is 83.2%.

I prefer the Note’s chunkier shape and additional width – the ATT employee sold it because it was too wide for her hands.    I never really used the stylus but the shape was terrific.

The phone is probably an Indian market Redmi (codenamed Prime)i, since that variant doesn’t have NFC (the near-field technology that allows cashless payments).  That version does have waterproofing, though, which is better for me since I don’t use NFC anyhow.

It came configged for English by default, which makes sense for India that has 90+ languages but uses English extensively.  Some of the South American market versions come with Spanish by  default.

The USB cord is USB-C on one end and normal flat USB-A on the other.  The power adapter is Euro- (and Indian-?)-style round prongs.  Not important since the cord is separate.  The phone charges at up to 18w but the included charger was 10w (2A @  5v = 10w).  Battery life is epic.  It was over 90% this morning and I was using it last night before

The SIM slots are micro, as is my freedompop att card.  My TMO voice card is mini, so it will have to be trimmed to fit.  Next time I’m around a TMO store I’ll stop in and see if they have a die to cut it.  The SIMs sit in a three-wide tray that also hosts the microSD.  I put in a 256GB microsd that the older chromebook didn’t like (boo!) and the phone sees it fine.   I’ve read where doing “adopted storage” (mounting the card to the phone as part of the filesystem) can interfere with Xiami OTA updates so I will wait on that for now.

A clear plastic case (heavy vinyl) is good enough that I will likely use it instead of getting something else.  Screen is Gorilla Glass 3 (not the latest version, but very good) and also has a screen protector pre-installed.    Testing on YT shows GG3 unaffected by utility knife blades, woot!

I positioned the camper near the North Bend public library because new phone setups and updates tend to take a lot of bandwidth.   I let google do the “reinstall all your apps” for the first time.  Worked pretty well, installing 90% of my apps.  I deleted a few I won’t need on this phone.

While that was happening I enabled ADB debugging in developer options and took a look around.  Then I pulled down a copy of  XAFT, the Xiaomi ADB/fastboot tools for easy and safe debloating:

pic from the git repo[/caption]

select what you want to uninstall/disable and hit the button.  Goodbye to battery- and space-hogging apps, and the snooping eyes of our Chinese govt overlords.

AFAIK  the XANT only shows stuff baked into the ROM and not installed software.  The latter can be installed from the app listing or manually from ADB with the

command.  If you dork something up you can pull the package back out of the ROM with

Don’t ask me why I know this.

with whatever options you want.

Some of the old crusty apps I prefer (mortplayer audiobooks, for example) don’t know how to handle the Android 10 names of sdcards.  There is 64GB in the phone (44GB free) so I’ll use that for problematic apps.

I like the fingerprint unlock but cannot find it reliably with my finger yet. A front-side fingerprint reader would be better for me;  This one is on the back and my phone spends most of its time in an easel.  I have to pick it up to unlock by fingerprint.

It’s still foggy/cloudy much of the day. 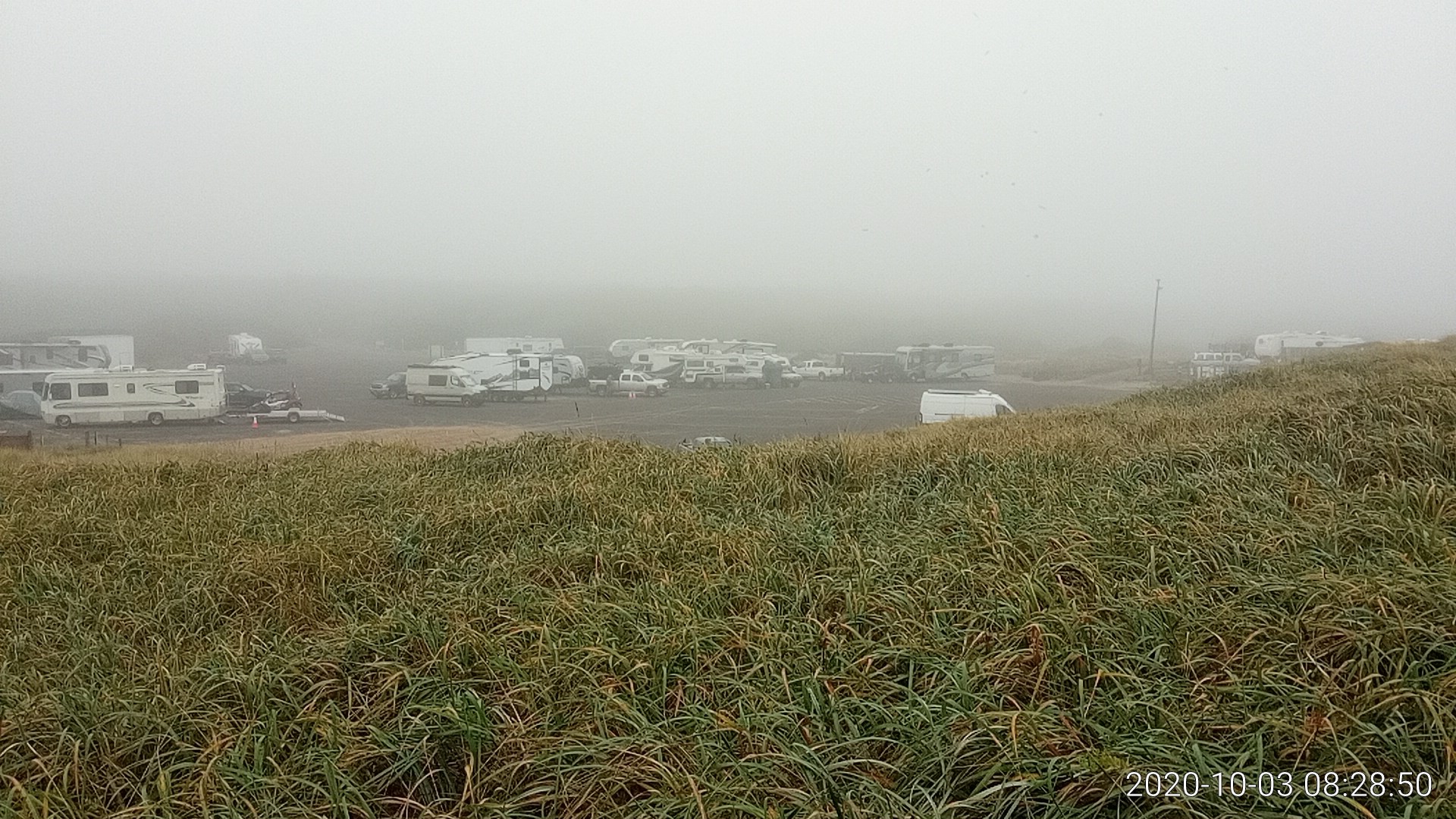 It did clear yesterday by solar noon, except for wispy cirrus clouds.  When that happened the system hungrily jumped to 402w.

During the week the combined day use (foreground) / campsite (background) site shown was lightly populated.   The 5er folks were behaving in a manner I’ve come to expect (running contractor-grade gennies, parking across multiple spots, littering) but at least there weren’t many of them.  But it’s Saturday and the weekenders have arrived.  Yay,.