When I was reorganizing the van the other day I found the little dual-band transceiver and the charger.  The charger was DOA but the HT was fully charged.  It is the only piece of ham gear I own now after downsizing into the van.

I ordered a replacement charger off Amazon.  Because of the weird economics of these things, it would only cost $10 more to buy an entire replacement radio with charger, but I have limited spac.  I wanted a USB version anyhow.   That package will meet me in Twin Falls, ID, mid-week.

In the meantime, I refamiliarized myself with chirp, the freeware radio app most folks use for radios like this. 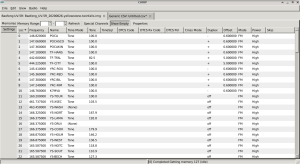 There are several wins associated with programming software like chirp:

In this case I moved all the semi-permanent entries to the bottom rows (the UV-5R supports 127 entries in its memory) so the stuff that would change is up top.   This is useful because there is a quirk where if you miskey something and get an error chirp returns you to the first row.  Annoying, but when the stuff you’re editing is up top there’s not too far to go.

Since I will me moving on to the Twin Falls area (and possibly Yellowstone thereafter) I loaded those entries up top.