The  tabernacle complex appeared to be closed for renovation (temporary fences, scaffolding) so I’ll have to do that some other time.

Being a field expedient type of guy, I set a new pilgrimage destination ((a brewpub), where I had my first pint in months: That’s a Helles, a German beer style that means “light” as in “color”, not as in light beer.  Dark would be “dunkel”.

Also had a decent pizza there.  Waiter was decent but not exceptional, as he was more interested in the hostess than my food.  So was I, to be fair.

It started getting warm in SLC so I headed up toward 7,000’+ in the Cache NF outside Logan, UT.   One the way up I passed through Wellsville, which might have been the most picturesque place I’ve seen so far.  But I was driving and didn’t stop to take the pic.

I didn’t know it until I was leaving this AM, but the spot I was headed to was 2mi away from the Utah/Idaho border.

I headed down the forest road, which kept getting rougher: 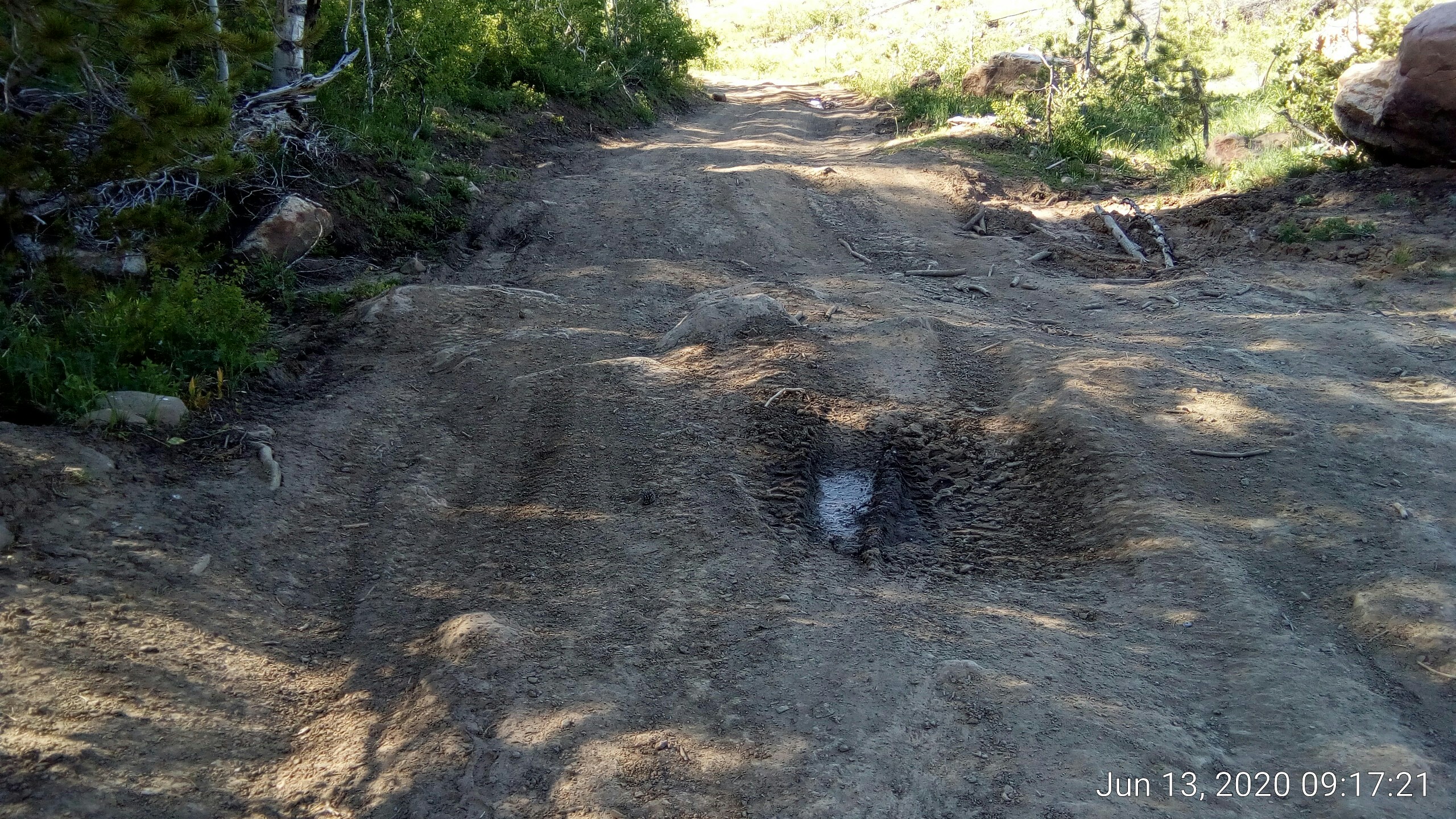 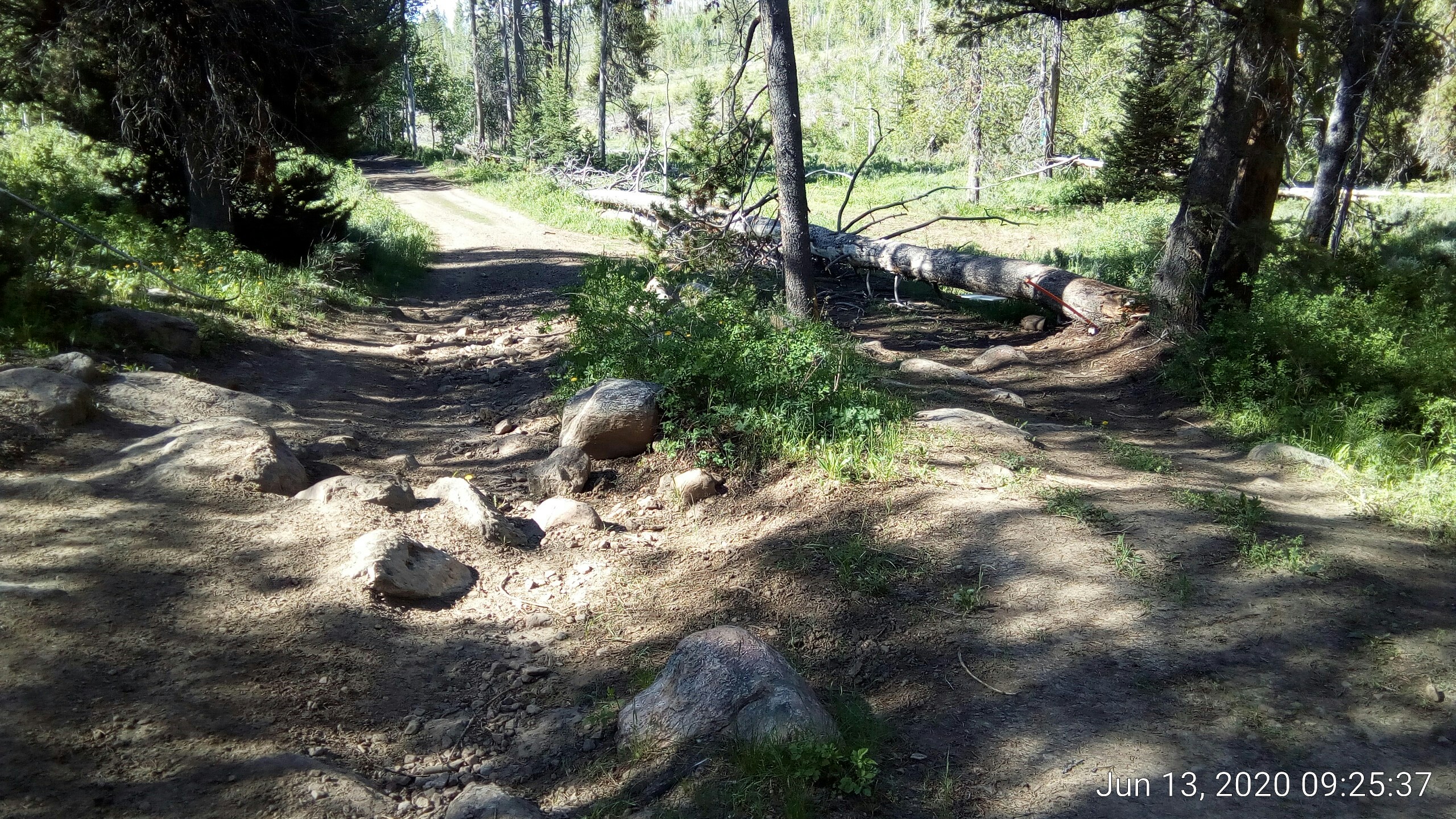 I started seeing stuff I could get through but probably shouldn’t.  I retreated back about a half mile and set up camp. 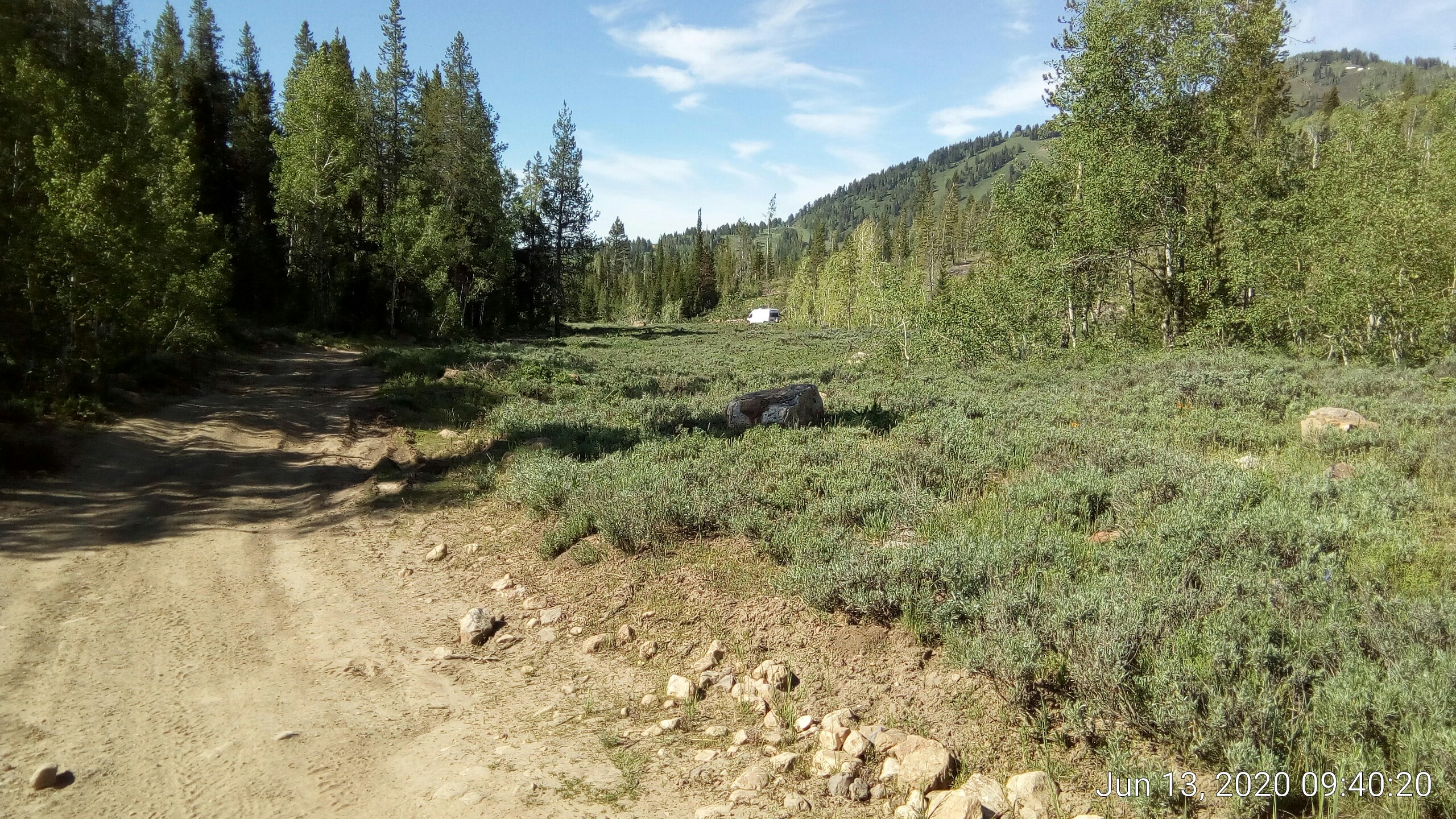 This turned out to be a good idea.  Muffin and I walked down there a couple days later;  just past where I turned back it it prohibited vehicles wider than 50-odd inches.  So it was effectively a bike/atv trail. 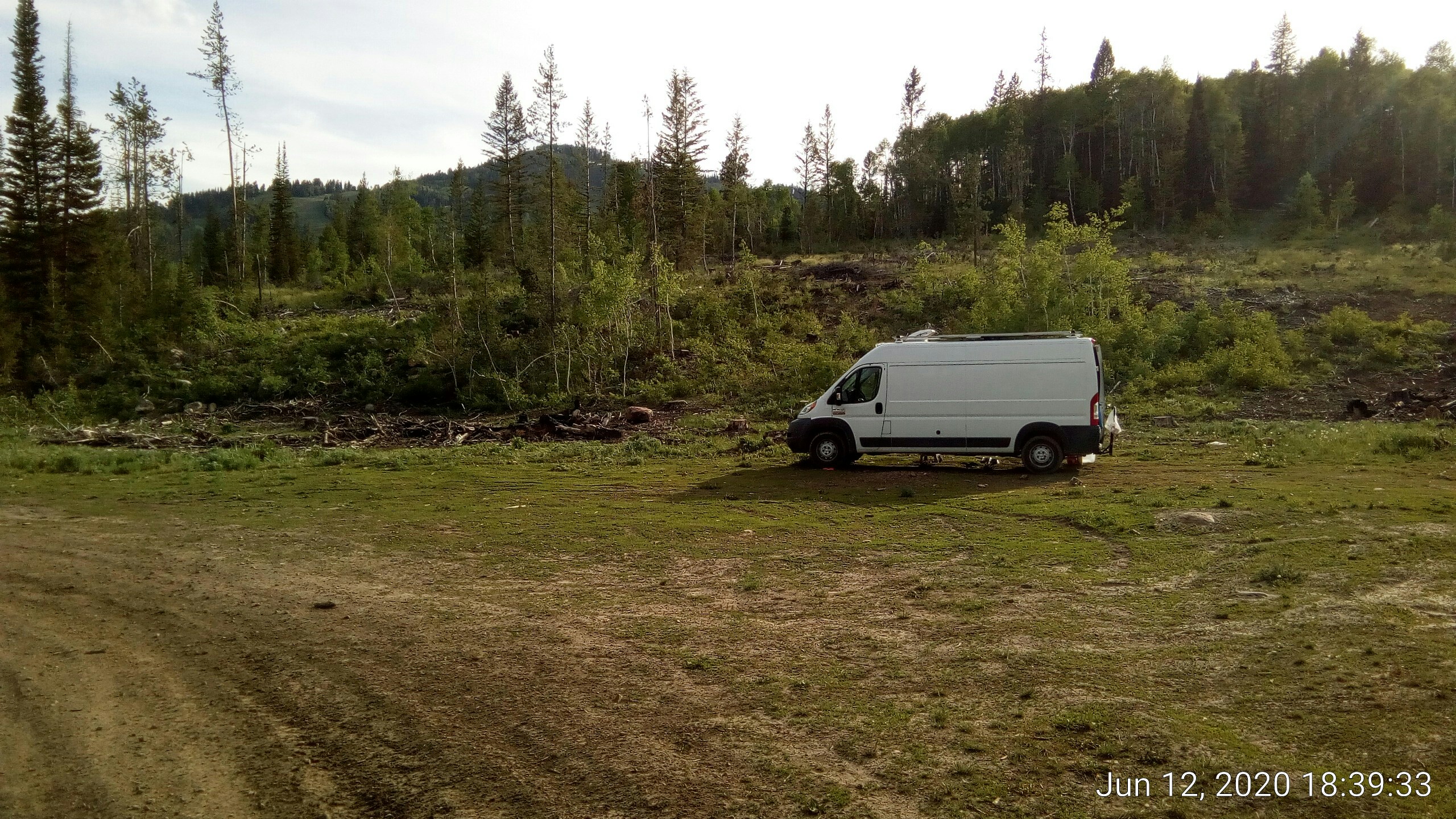 The land bordered a forest harvest rehab area;  there were large areas (see left of van above) where trees had been bulldozed together and burned.  I’m not a campfire addict, but you could gather everything right there.  I did make a few fires.

Amazing solar capture there.  The sun was so intense I set up the awning: 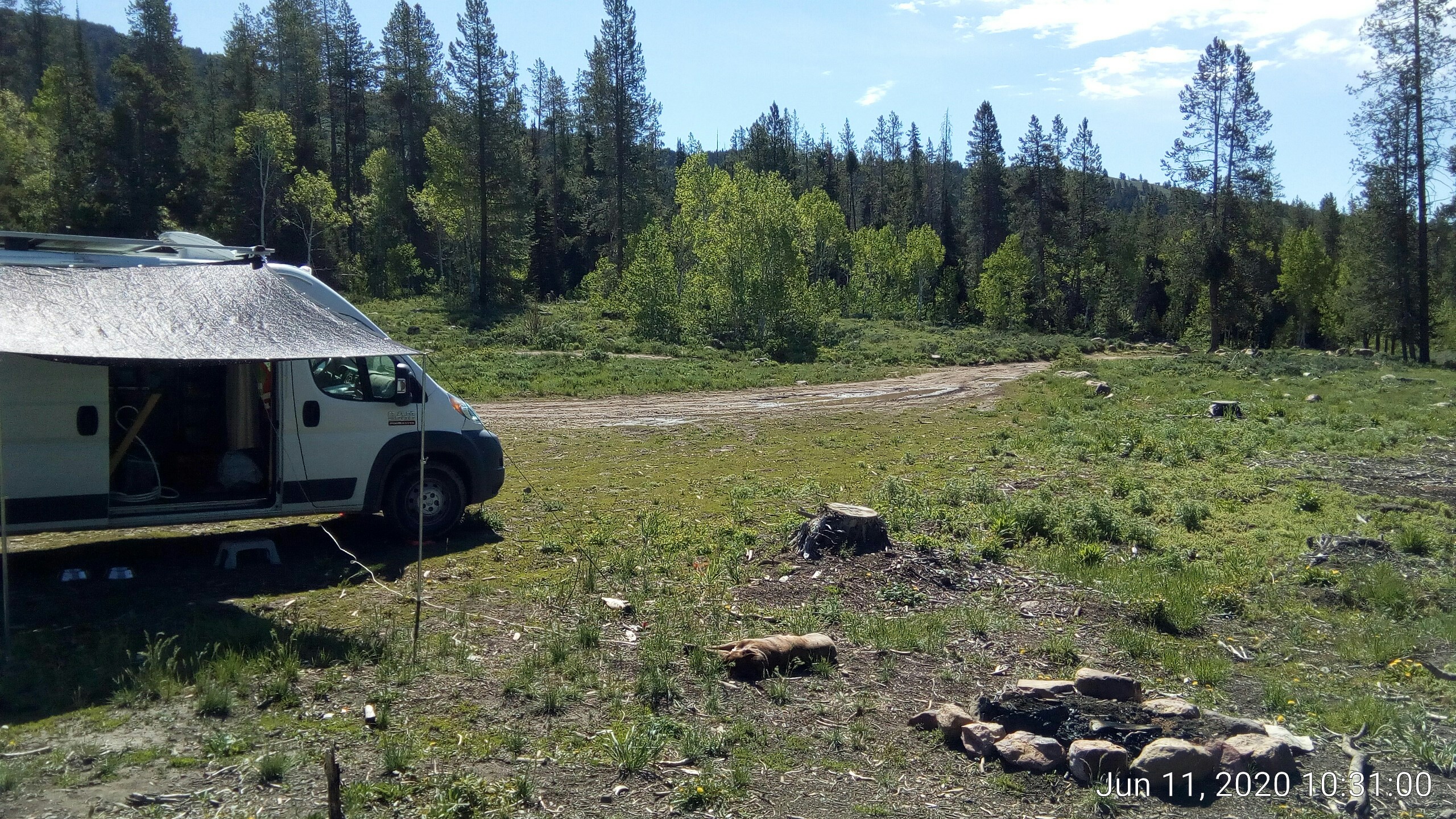 Near where we turned onto the FR was a clear, firmly flowing creek.  Doggo and I had been walking a while and had gotten warm, so I took her over for a slurp.

After a few swallows she jumped in to finish drinking: 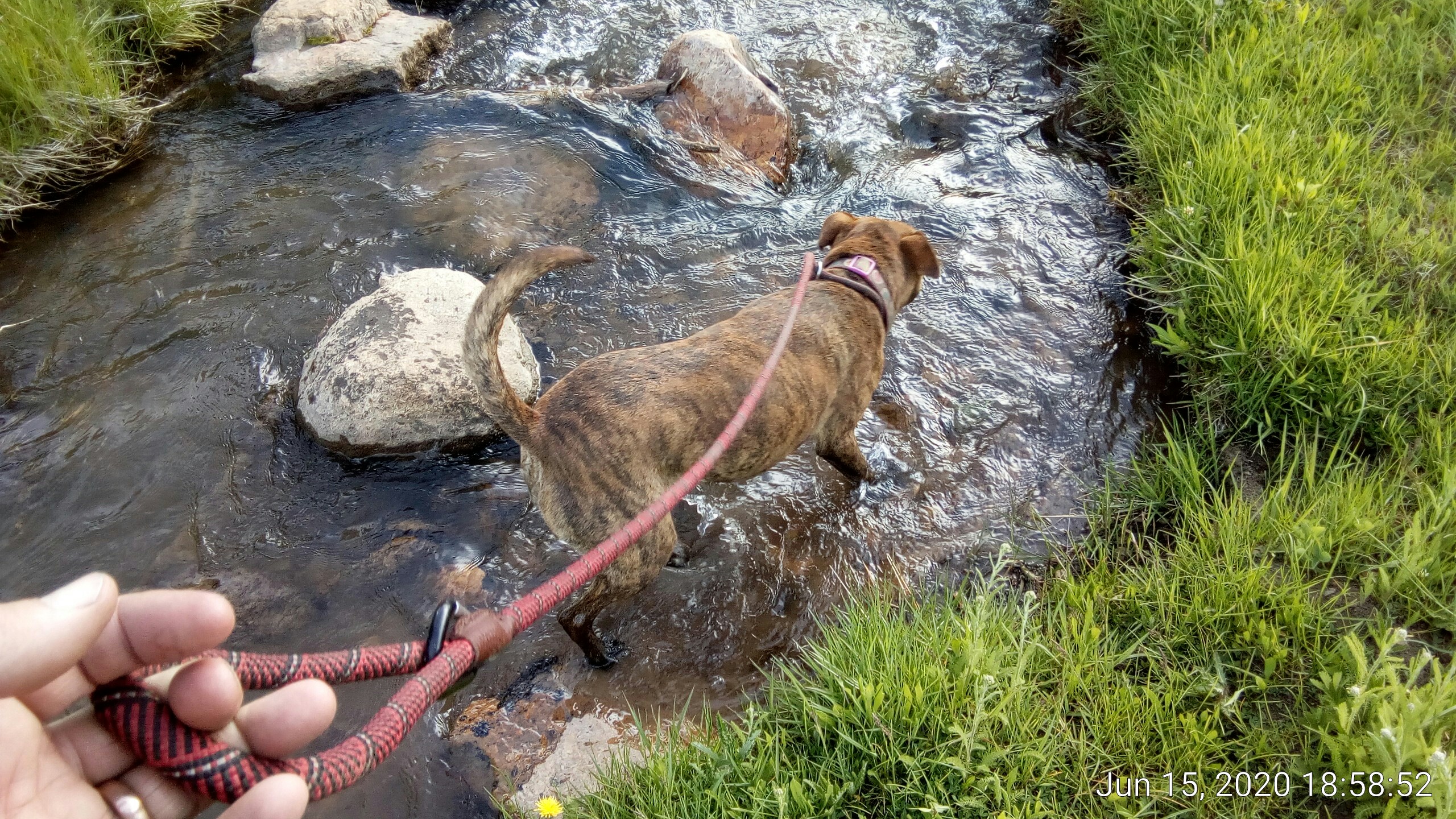 I spent 5 days at that spot but it got windy and there was zero bars on Verizon, TMO, or ATT.

This morning I came back into Logan proper, did some laundry, some reprovisioning, and found the local Planet Fitness showers were open.  Holy crap!  FIrst actual shower since late Feb or early March.