Around noon today a kid got separated from her family somewhere in this offroad area.  One of the family members walked into camp around 1220 and asked if I’d seen a stray 9yo redheaded kid.* Nope, he was the first human on foot so far today, although there had been one UTV on the trail earlier in the morning.   After he continued down the path I walked to the top of the rise I’m parked behind and scanned with binos.  Nothing.

It hadn’t been very long and I was paying attention but not yet worried.  For now I moved my reading spot  to be able to watch a wider area to the west (my only clear-ish view) in case she came through.  I flagged down a couple passing UTVs to ask them to watch for the lost lamb.

Around 1300 menfolk from the family stopped by in a UTV – still not found.   Not good.   They were clear-headed and calm given the circumstances, which is both admirable and helpful.

I asked for a bit more info:   she probably didn’t have any water (had left her pack), did have some group hiking experience, dressed in white shirt and probably blue checkedshorts.  The white shirt was a lucky break because it would stand out against all the natural colors in the area.  They continued their motorized search.

To the north was a hill about 3x the height of the one I was parked near - it would make a great overlook of the area.  Kiddo was likely parked in the shade under a tree, but if she were moving around I might spot her from that vantage point.  The route would be circuitous but, who knows, I might run into her on the roundabout way up the ridge.

The terrain up the hill was visbily rough and lacked any trail.  I thought seriously about leaving Muffin in camp in order to move faster.  Then I figured that a lost 9yo might be comforted (or at least distracted) by a dog in such a situation.   We set off, Muffin underfoot most of the way.

Although I was headed to the summit, there was a break partway up that had decent views to the east, south, and west (past the left/right edges of this photo).  I surveyed with the binos – nothing.  While I was there I took a pic of the general area.  You can see the van in the right center: 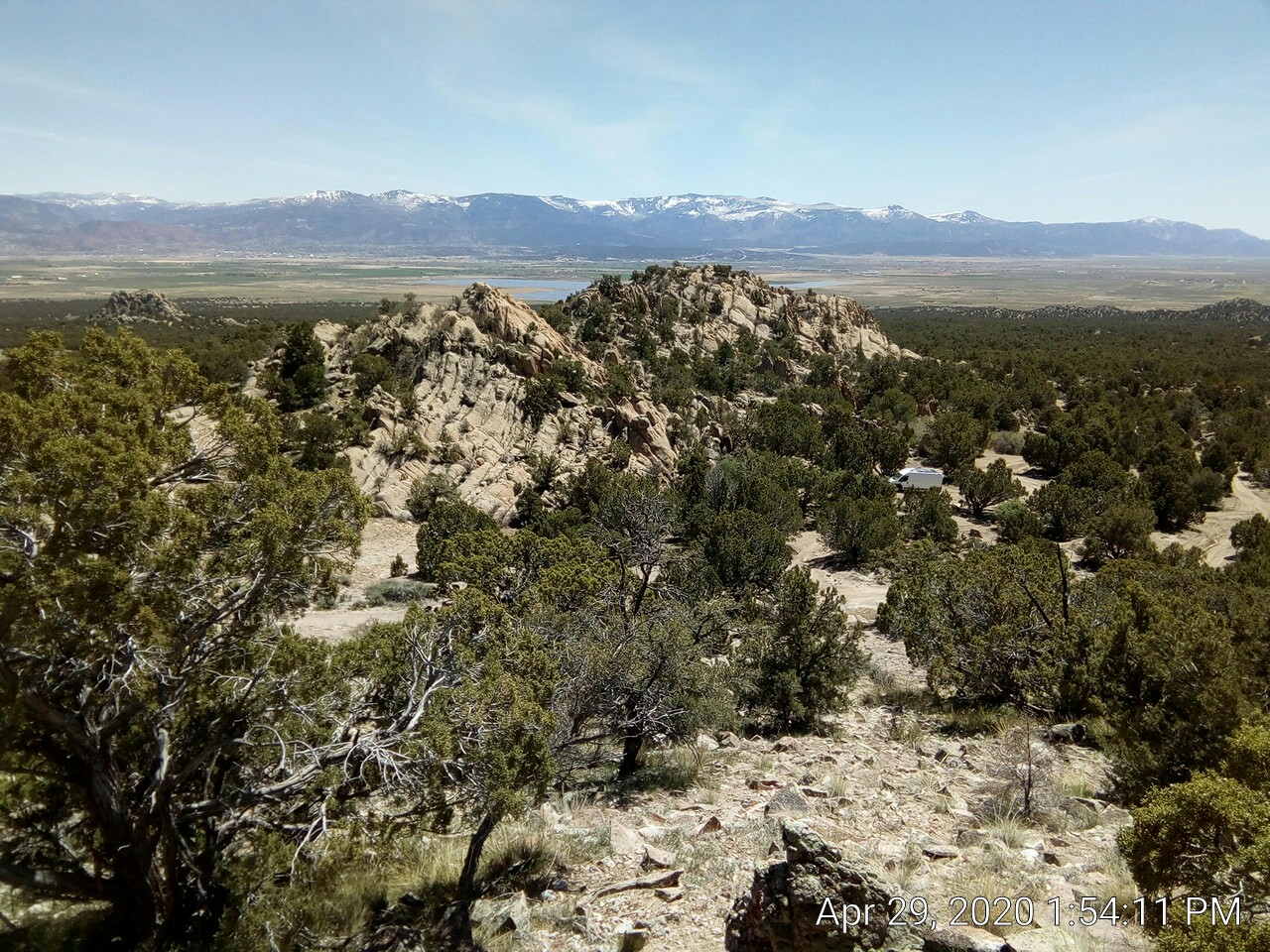 By about 1430 doggo and I nearing the top.  With the binos I could see official vehicles coming in on a road to the east.  LEOs appeared on the trails and were calling the kiddos name (I didn’t know it until that point).  The SAR helicopter appeared on the horizon.

I saw the young family member from before pass me about 100ft further up the hill;  we’d had the same idea.  I was wobbly from the climb so took a moment to water myself and the dog.  I also wanted to see which way he went so we wouldn’t duplicate efforts.  While Muffin drank up I noticed the fellow taking a cellphone call.

After he hung up he seemed to be saying the kid was found – it wasn’t entirely clear.  I shouted a request for clarification and he confirmed.  Since he wasn’t using a command voice the LEOs down at ground level couldn’t hear him.  I shouted the info down the hill in sharp, clear, language that the kid was reportedly found by family members.  The LEOs appeared to call in on their HTs.   Total time missing about 2.5hrs.

I don’t know how it resolved after that because  Muffin and I started picking our way back down the hill and back to camp.  I never saw the kid and don’t know her condition.  The helo was called off which I take as a good sign.  By the time we got back to camp Muffin and I  were hot, thirsty, and well-exercised.  We cleared the schedule for the rest of the day and rested in the shade.

A** whistle** is a great rescue item because:

I have one of these clipped to my daypack.  It is brain-vibratingly loud and I recommend something like it for everyone.

While picking a route up the hill I kept thinking that an emergency whistle might have turned this search into a ten minute affair.

*Muffin walked right up to him for petting.  I suspect she’s a good judge of intent.