Earlier in the evening I heard a honk and saw a Suburban behind me;  I recognized him from a nearby campsite.  The gentleman had too much perishable food and was trying to pay it forward.  Unfortunately my fridge was jammed due to the recent reprovisioning in Parker and I couldn’t help.  His rig was a full-size Suburban with 490w of panel (!) on it and a homemade cargo trailer.

I wanted to hit the Safeway in Parker before heading back to Quartzsite for two reasons:

I got some lemon cappelini  pasta salad and downloaded the podcasts I had queued up.    Headed back to Q.

My first stop was at the Main Street laundramat because I wanted to wash clothes (duh) and because I heard they had showers.   The laundry was rather large, probably 15 front loaders and maybe 20 top loaders.

I enquired about the  showers, suspecting they might be closed due to Covid

Me:  how does the shower thing work? Attendant:  You give me $9 and I give you a key to the shower. Me:  Deal!

:-)  I went to the van and prepped my gym bag.  It has been ~6 months since I’d had a Planet Fitness shower so it was no longer stocked/organized.   Headed back in and got the key.

The sign said the showers were limited to 20mins, which seems reasonable enough.   At PF when I could stay in there forever I sometimes stood under the hot water for longer than that.  I had read that the water temp in the showers could be on the cool side but I figured I could handle that, too.

The showers were clean, and a towel, washcloth, shampoo and a hotel soap were provided. It turns out the water was plenty hot, and I had to turn it down from the position I preheated it to.  20 mins was enough time  to get everything done at a normal pace.  It took longer to get my hair squeaky clean than I anticipated.  I think I’d pay a few more bucks for more time under the hot water.

By the time I emerged freshly scrubbed there was 1 minute left on the laundry wash cycle.   I loaded the dryer and went to walk Muffin in the area.

It was such a success I decided to write that certified letter to PF cancelling my account. I’ll do that tomorrow, I think.

While I was in the Laundromat I saw a banner for JAKES DISCOUNT GROCERY up the road.  I wasn’t planning on adding provisions, but what the heck.  It’s smaller than the tent-based on I usually go to, but I picked up some coffee, beef jerky, beef sticks, etc, for vurry cheeeep.  The owner applied some informal discounts at the register.  Example:  bags of jerky were $2, but he counted them as 3/$5 at the counter ($1.66/ea).

It’s a toss-up between this one and the tent grocery.  The tent grocery has more stuff (esp. canned goods) but the parking for Jake’s is easier.

I headed to RV Pit Stop and paid my $2 to fill up water – that makes me irrationally happy.    I asked the clerk about propane and she said they can top off 20# bottles by the gallon.  Rock on!  I don’t need it now, but maybe after the 2wks here is up.

When I drove past Plomosa and Hi Jolly I noticed their camp hosts weren’t on duty.  The water stop put me nearest to Dome Rock so I hopped over there to see if the host was working.  Yep!

Dome Rock is pretty spread out, and the “California” side has mountains pretty close to the south.  That would affect solar so I went to the area up Cholla Rd.  Mainly Class A and trailers here right now.  Nearest was about 200yds away but after I set up two Class A set up about 100yd away.  I don’t hear any generators yet.

Internet is pretty rough in this particular spot. Back to modem speeds.  No worries, it will encourage more hiking.

I am pleasantly close to a saguaro, maybe 50ft: 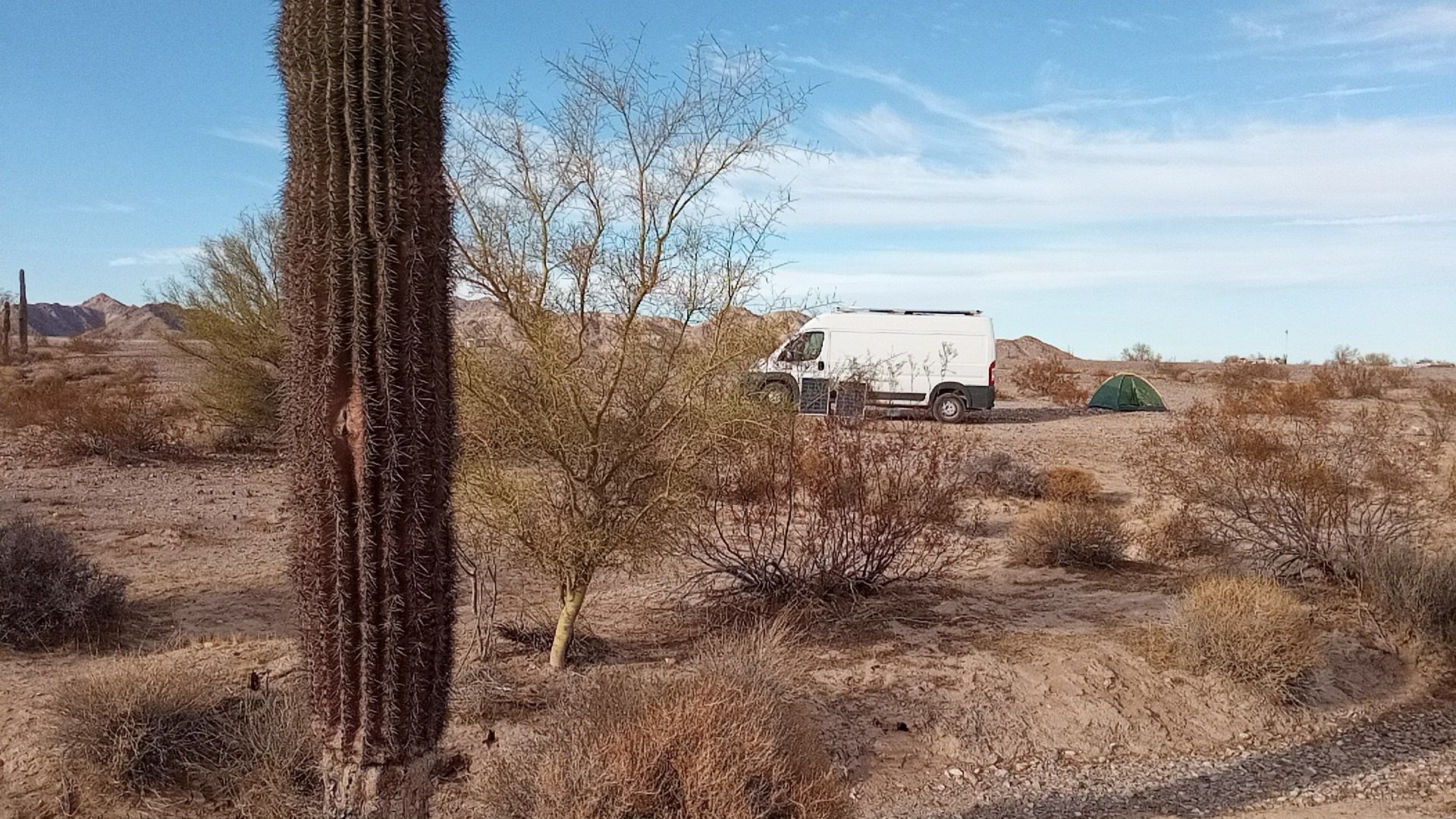 Muffin made herself at home: