It’s for the best because the dogs I had required all my attention;  some were very fearful, some were escape-obsessed, etc.  The pics below were taken by the shelter.

First dog I took out was a small female lab mix, Japan:

She’s been at the shelter for a few months.  Not sure why, she was friendly and walked fine on the leash.  As is my current practice, I sat with her for 5mins or so before getting her out for the walk.  This gives the hyper face-licking and other excited behaviors a chance to fade.  Once the dog loses direct interest and starts looking around at other stuff I figure it’s time for walkies…

As I checked the list for housebroken dogs, next up was Timberland, a very tall and heavy doberman mix.  Other than size and a sturdy rather than fine head, he looked like any other dobie. I took a deep breath when I read that he is “hard to get back in the kennel”.   I braced myself:   this is not a 10# chihuahua I could pick up and carry back to his pen.  Knowing that it would be justifiable for Normal People to skip him for walks (walk 4 dogs or this one challenging dog?)  I headed for his pen.   Big, scary looking, neurotic dogs have become my forte, I guess.  Perhaps I am too thick to know any better.

As I headed toward his pen I made peace with the idea that the rest of the morning could be consumed by this one doggle.

We sat together for a while;  he was shy but did end up coming over for face and ear rubs.  Due to a temporary configuration for kennel cleanout, I had to take him out the front door of his pen where he would have to deal with 2x as many other dogs as usual while exiting/entering.  He froze a few steps outside the door to his pen;  we had another 15’  just to get out of the kennel row area.  The other dogs erupted when they saw him out.

This immediate balk was a surprise to me;  generally with kennel-avoidant dogs the exiting and walking goes fine;  it’s only being put up that freaks them out.  I tried to remember what time the kennel closed, and suss out if I could get him walked and put back up before then.  Confidence was not high.

Couldn’t get him to budge.  His worried look increased when I took the slack out of the lead no matter how I did it or where I stood in relation to him.  I fished out a sliver of dog treat from the baggie in my pocket and met him half way;  he took it.  I got another one but stood in place and he came to me.  I turned and started walking as if I expected him to follow.  He followed.

There were a couple more balks just outside the kennel building but they were brief and half-hearted.  You could read the uncertainty in his face.  We started the walk in earnest.  Having seen the balking a few times his body language was more readable.  We might go 50’ and he would get start to get worried – before he actually stopped I’d sit down on a curb or something in the shade.  We’d sit there until he got over the impending freak-out.

When he was relaxed he’d start wandering around on the lead – when he was heading in the right direction we’d start off again.  Reminded me of a quote from Les Liasons Dangereuse:

Working hypothesis:  the pre-balk was caused by anxiety/fear but the full balk was  triggered by lead tension.  Dunno if his last humans dragged him by the leash or if was a personal quirk.

As we continued to walk the pre-balks became less frequent and he seemed more relaxed.  There was a bit of hesitation as we made the turn to start heading back.  Finally we were at the entrance to kennel row.  He slowed mid-stride then went in the building;  I was sure he was going to freeze there.  As we neared his kennel he started to aim that way so I opened the door smoothly enough he didn’t have time to stop and think about it.  He stood quietly inside the pen with me while I took off the lead.

Normally after a walk with any of them I remove the lead and stay with the animal until he loses interest in me again.  My intent is to break the connection between returning to his pen and being left alone again.  This is some half-assed dog psychology on my part but I think it has an effect.  It’s the bookend to unlocking the pen but not entering immediately – door sounds do not equal dog or human going through the door. Rushing the door = more waiting.

The lessons for me with this sweet-but-challenging beast were to control my own reactions (impatience, frustration, self-consciousness), allow space for the man-dog relationship to develop, and figure out what was causing the balking.   Dogs make excellent teachers sometimes.

I tried but couldn’t get the beautiful Kona to join me when I came in to sit with him.  Very skittish, he stayed behind the guillotine door that separates the halves of each pen.  His legs were visible but because he couldn’t see me he thought I couldn’t see him.

Even treat slices tossed at his feet wouldn’t budge him.  :-(

Xena must have been adopted because she is no longer on the site where i could grab a pic.

She was a skinny GSD with huge bat ears and a sweet personality.  You know a dog is skinny when she has medium length hair but you can still see her ribs. :-(  I’d guess she weighed 30lbs.

A lady wearing a red shirt was visiting the shelter with her soldier husband.  Xena had seen her stop briefly at the pen while we were sitting pre-walk.  One we started walking the dog seemed to be watching for Red on our walk; anytime the dog could catch a glance she’d stop and watch.  Maybe Red looked like a previous owner?  Dunno.  I’ve haven’t  seen that before.

After the walk I put the dog up I found them in the Medium kennels and told the couple about Xena’s looking for the wife. Red turned to the husband with a broad smile and a “See?  I told you that dog was looking at me” expression.  I let them know I wasn’t trying to sell them a used dog but that there was something going on between those two.   Maybe they came back for Xena later?  She seemed to be ready for a home. 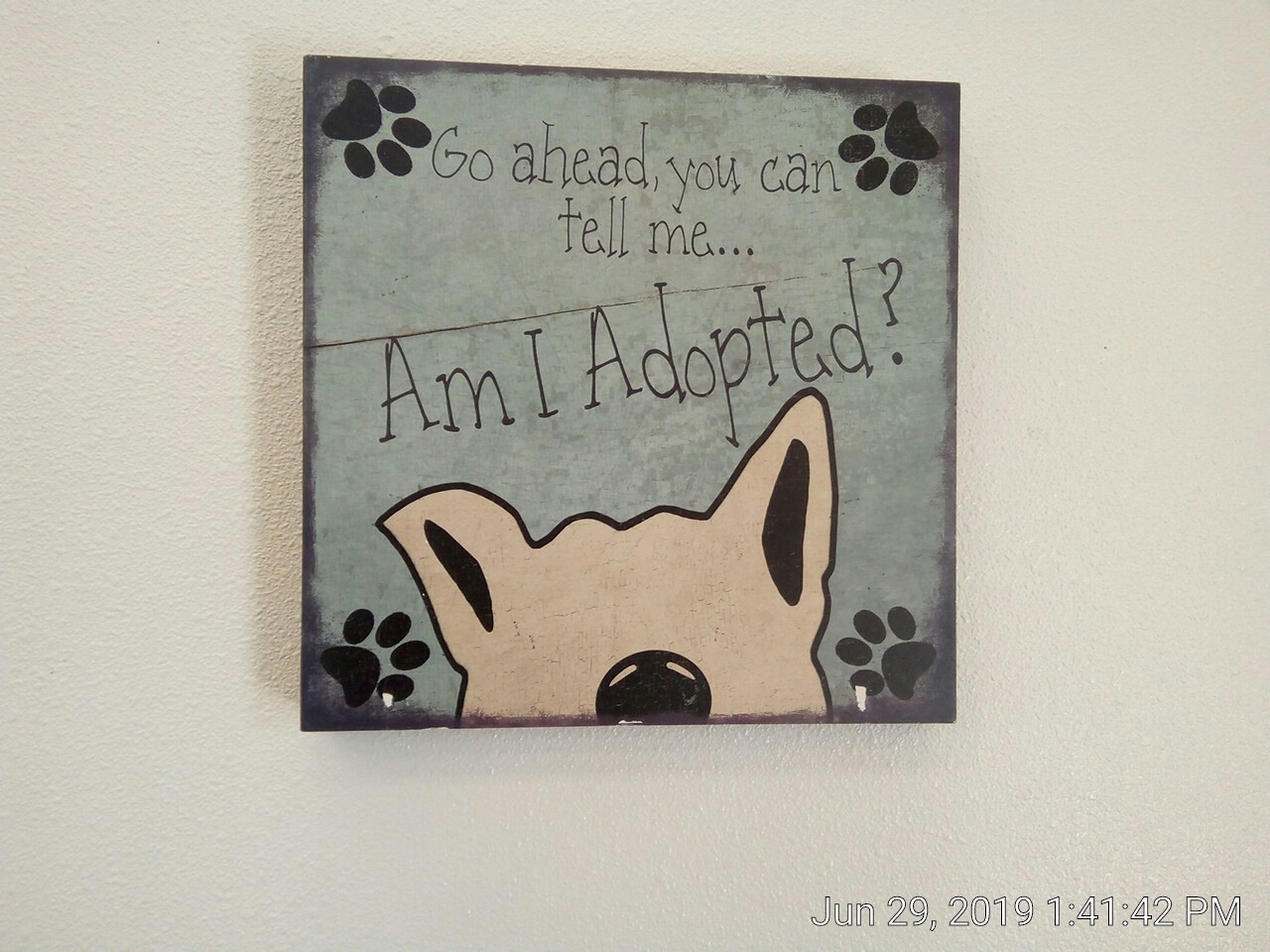 picture hanging at the shelter[/caption]

There was one more “failure to launch” dog I couldn’t get to come for a walk.  IIRC she was a dark, lovely female pit.  After that rejection I needed a wiggly dog that was eager to walk.

This pit mix met requirements.  He wagged his tail with such gusto his body curved from side to side like an overstimulated slinky.  I wondered if his vision got blurred at such times.

Took a few tries to get in without him rushing the door but I expected that.  His energy level and the back-office “escape artist” note suggested he ached to get out of the pen for a while.

Took about 10mins of sitting and interaction for him to get settled down and lose interest in me.  We donned the lead and headed out to the green grass.

It was a normal walk, checking pee-mail and nibbling at random vegetation.  I touched the sidewalk before we got on it and it was starting to get hot.  Still walkable but I knew it’d be the last dog of the morning.

Thanks for giving me an easy one to end on, Mr. Steve!