There were signs posted in the Lincoln NF where I was camped outside Ruidoso, indicating that the area had been through a forest fire.  You can see the fallen trees and the skinny new growth: 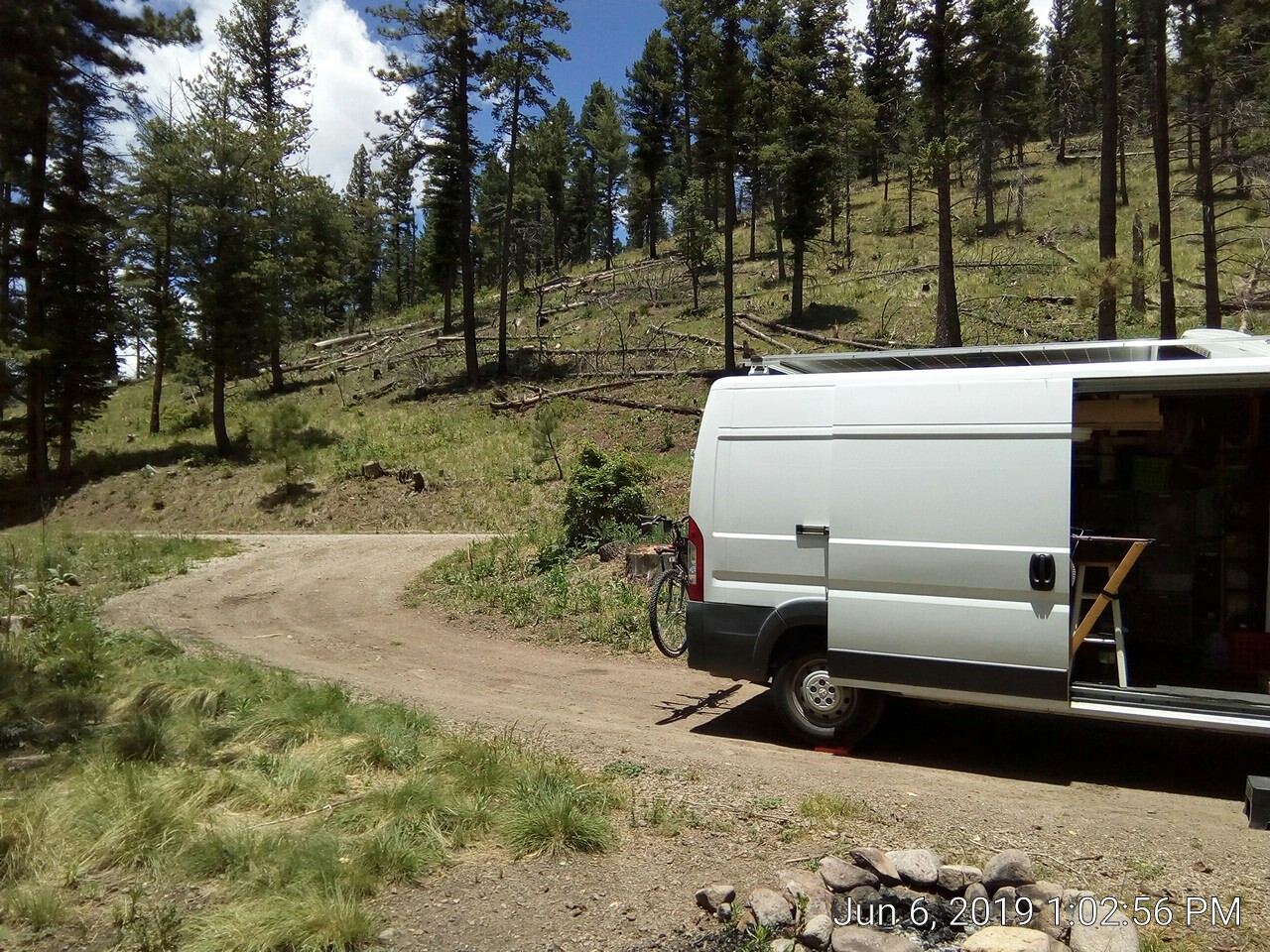 Not in the road;  this is a little pull-out off the forest road seen center left[/caption]

You might be able to see one of those orange leveling blocks under my right rear.  This was the first time I’ve used them.  They stack nicely and don’t seem to mind having a van sat on them.  It’s harder than I thought to get centered forward-back on the blocks;  a manual trans would allow for more control.

Here’s a dry creek bed (white rocks).  There were all kinds of neat inclusions in dark rocks (not visible in the pic). 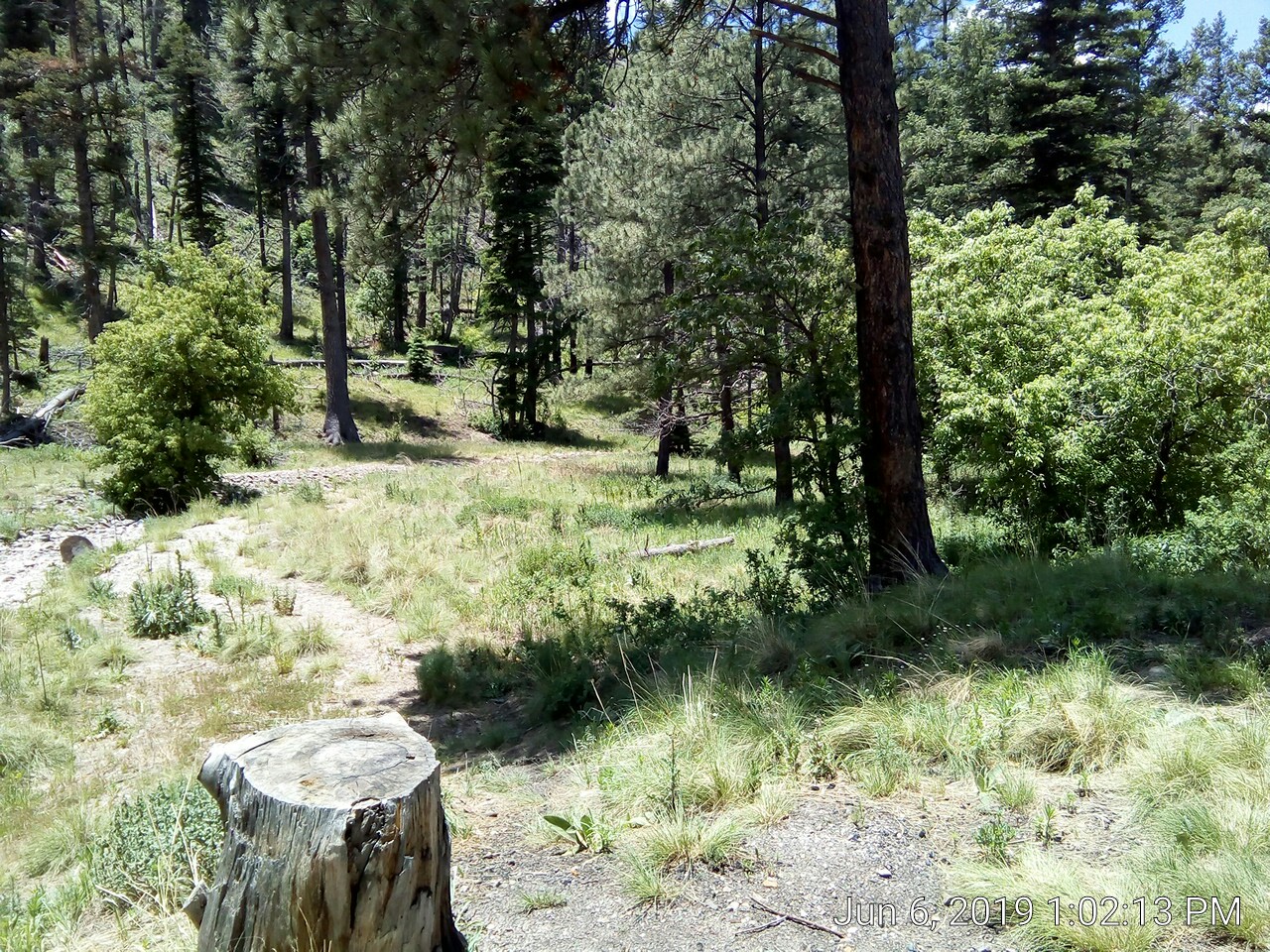 I stayed overnight Thurs/Fri, then broke camp Saturday AM to walk the little strip in Ruidoso.  Antique shops, cabins, crafts, etc.  Had an elk hamburger which was $14 (!) but prepared very well.

Later that afternoon I headed out to Cloudcroft to the west but still in the Lincoln NF.  I found a pullout off a NF road at 8800’ (!) and set up camp.  Parked the van atop the orange blocks with better accuracy this time.  I was quite near the highest ridge on that particular mountain: 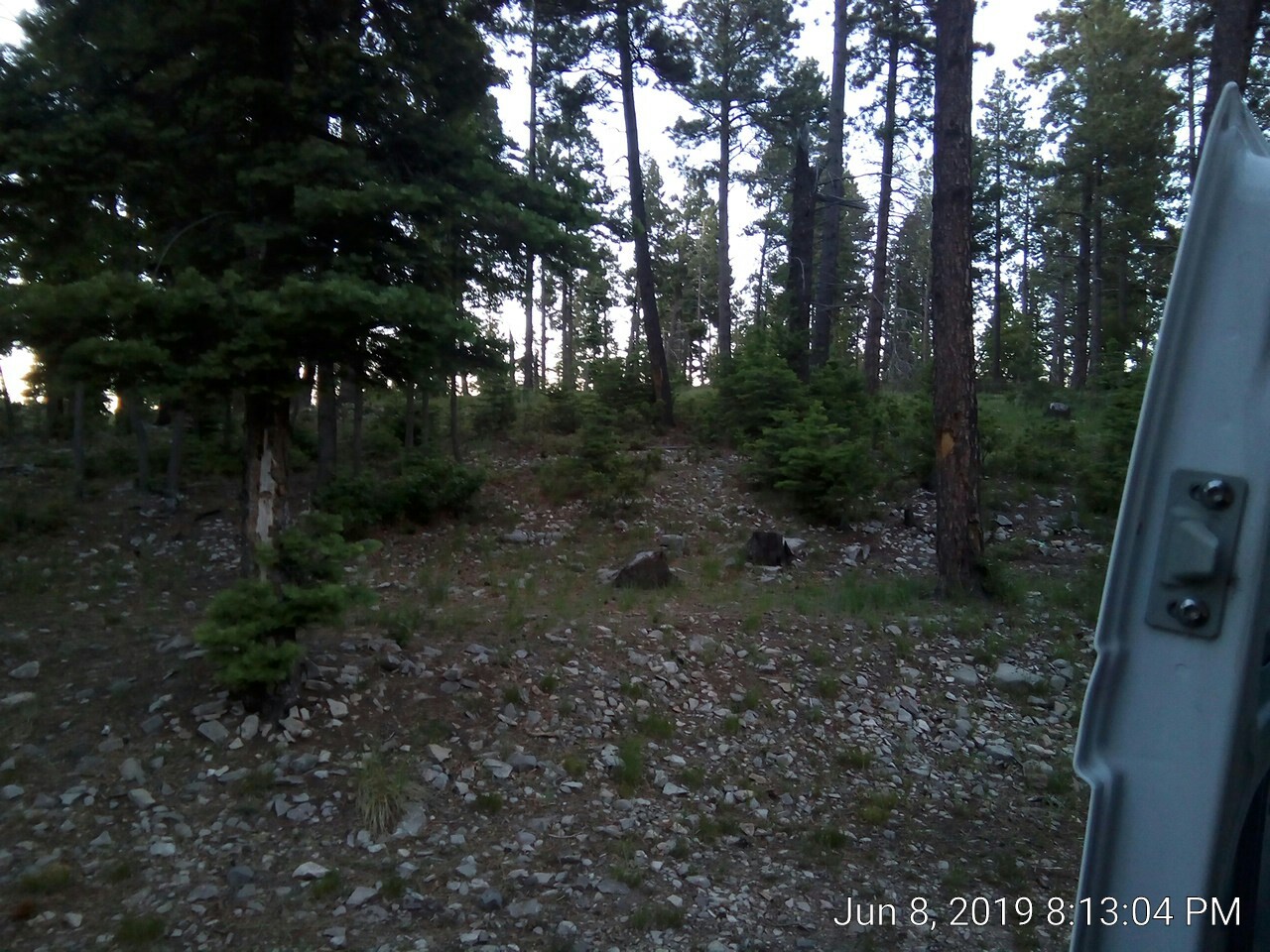 Looked a bit different as the sun went down: 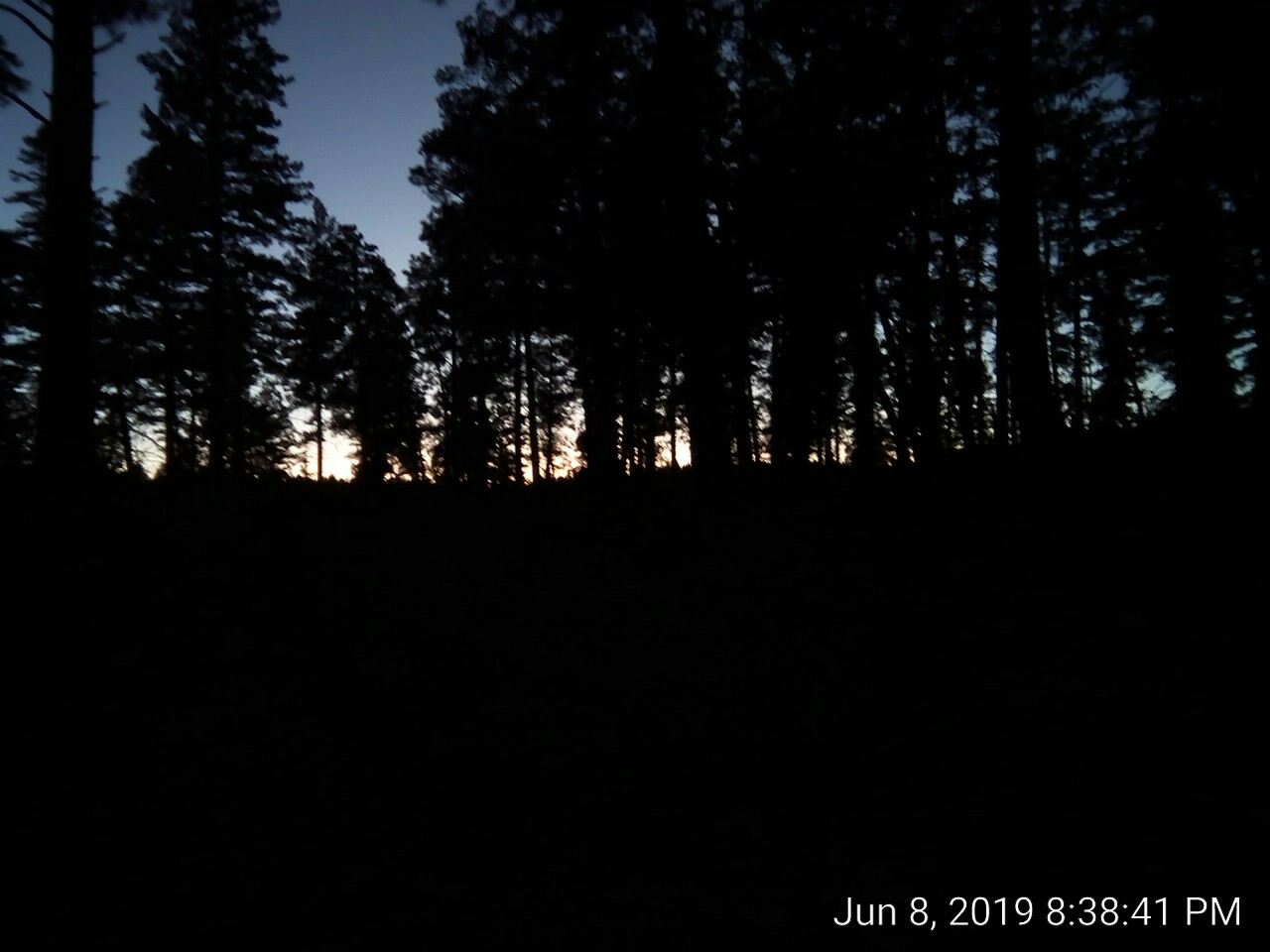 I had a headache that took a few hours to dissipate;  I think it was from the increased altitude.

For many years I have been a fan/collector of Coleman pressure gear:  stoves, lanterns and heaters.  I had a dozen+ stoves (single “sportsters”, multi-burner “suitcases”) and a dozen+ lanterns.  I also had a couple “roarer” stoves, European models that work a bit differently from Coleman-style pressure gear.  They are called roarers because they roar (durrrr……) while burning. To me it sounds like a rocket motor or jet aircraft taking off.  Some people hate the sound and volume.  I love it.  Has to do with how the flame comes out of the burner:  coleman stoves have a ring of flames like a residential gas stove.  Roarers have a single blast flame that is distributed when it hits the underside of the spreader (circular plate in the pic below, suspended by three tabs).

Getting rid of my pressure gear was one of the few sad moments of my move into the van.  I did take along a multifuel sportster that burned coleman fuel, unleaded and kero.  This stove was quite small, intended for backpackers and a lot of heat from the pots was getting reflected back into the fount (fuel tank).  It was also not possible to pump while cooking. 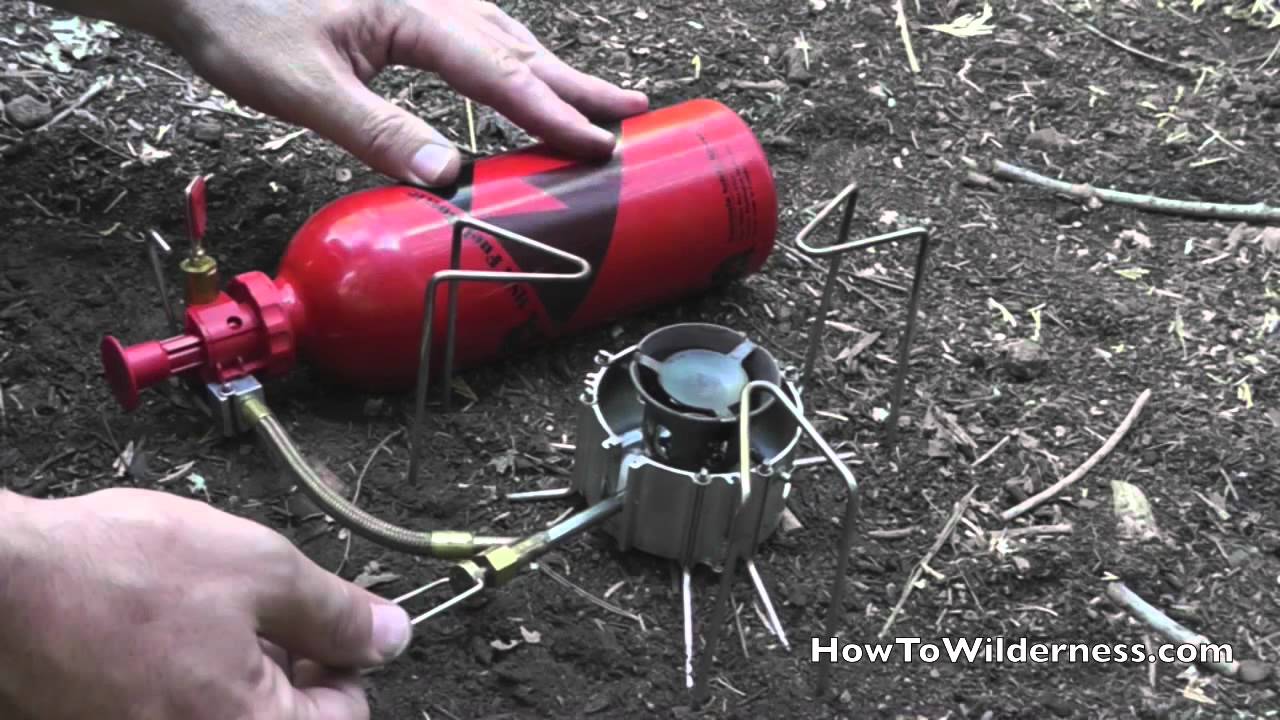 For about 10yrs I’ve thought about testing an expedition “skeleton” style stove.  These are wire-frame stoves that use a remote fuel bottle.  The remote solves the issue of unwanted fount heating and pumping while cooking.

Amazon has good deals on used/returned/damaged-box items listed under Amazon Warehouse.  I picked up an MSR Dragonfly fer cheeep and cranked it up (crunk? crunked?) for the first time on that mountaintop in Cloudcroft.

It didn’t seem to mind the altitude: