Ok, changed my mind after the last post and stealth camped in Marfa.  I didn’t expect much, but didn’t want to be 20mi away and not go there.

It’s a terrific little town.  Old buildings, people walking, a biergarten, and a tiny film festival on a corner lot: 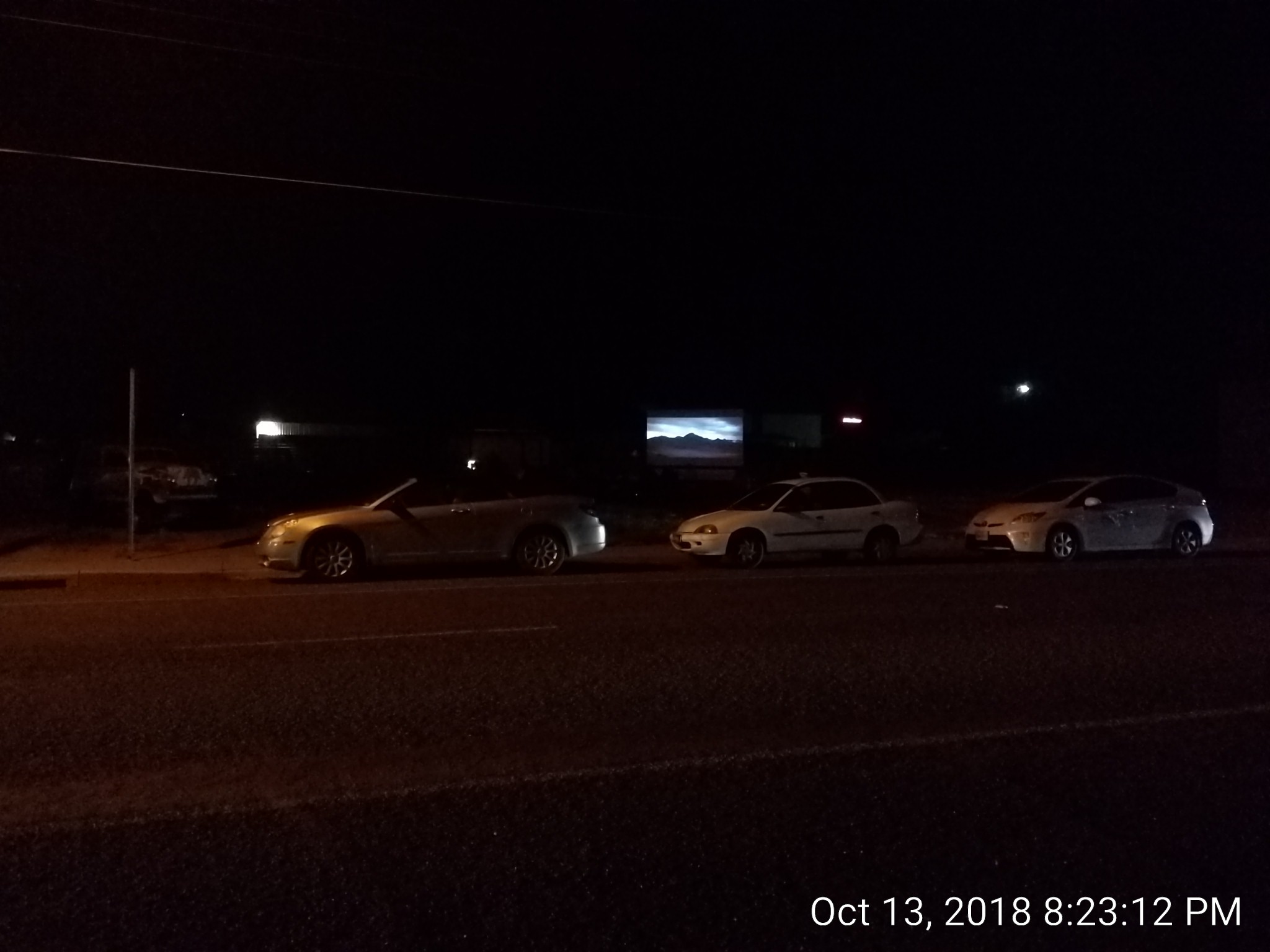 The next morning I went to Fort Davis proper.  It’s going to be pic heavy so I’ll put the page break here…

I didn’t take many pics of the existing buildings, figuring you can see those on the internet.  I walked every location and hiked three trails which cover the park east-to-west.

The location itself is beautiful.  Strange, vertical rock structures jut up from the hills where the fort was nestled.  In this pic the white structure is the hospital: 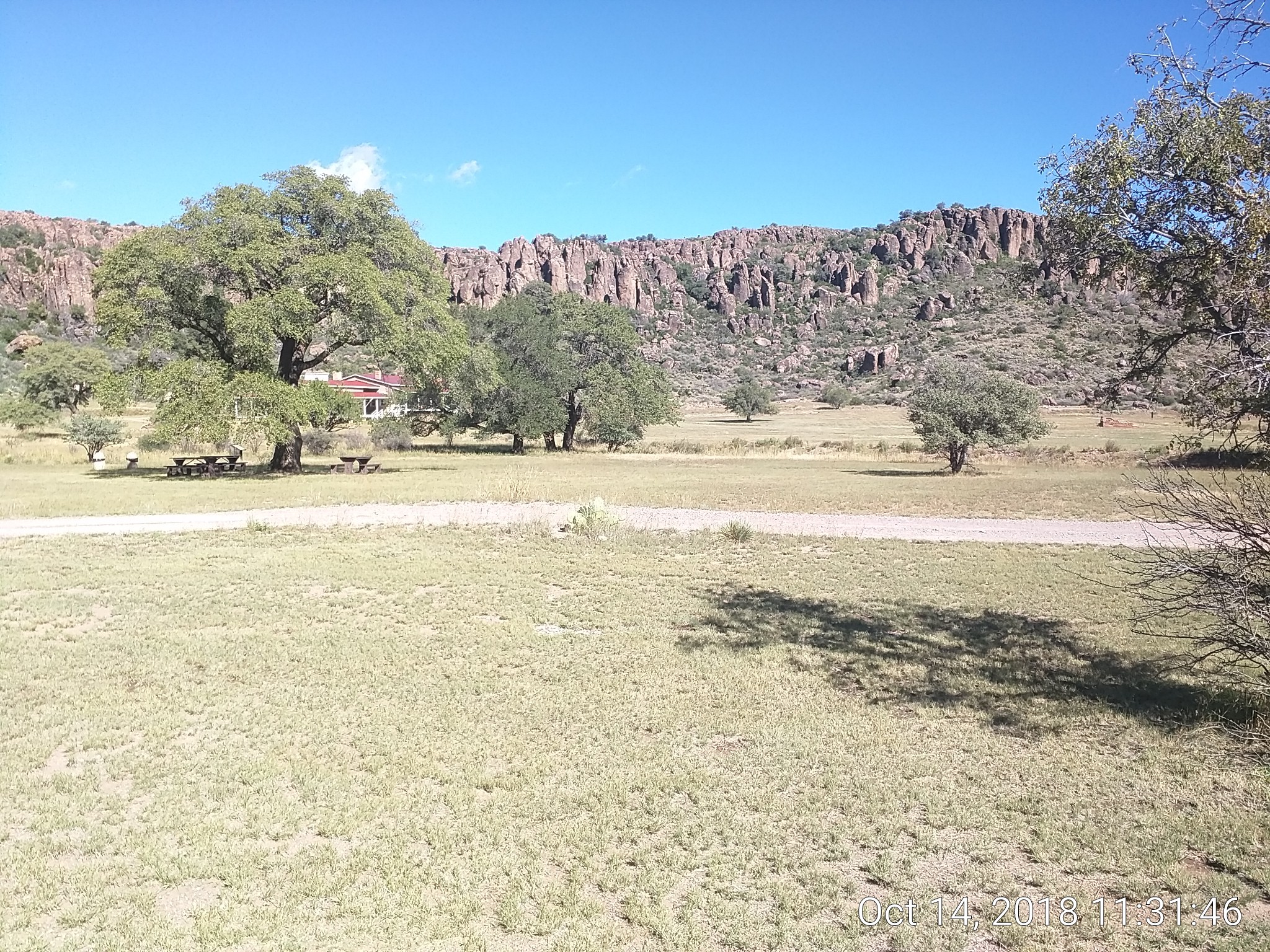 This is a breezeway in the hospital.  Sun was blasting but it was very comfortable in the breezeway.  I could imagine folks lingering there: 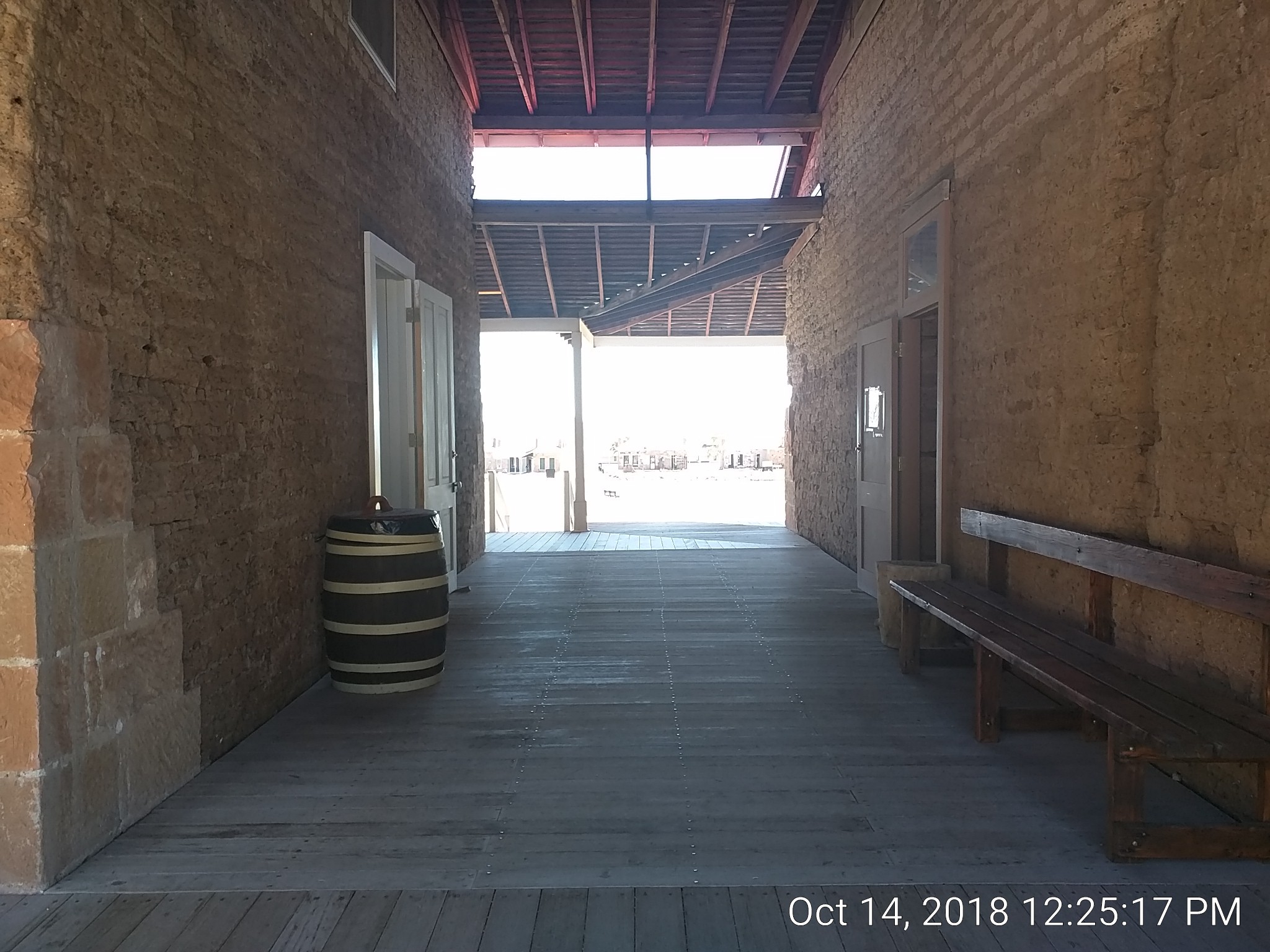 The rafters in these buildings were open, as they were at the time.  There was a sign up:

Bats are roosting in and around the hospital.  Please be quiet while visiting to not disturb their sleep.

That made me smile.

A view from the breezeway has several interesting (to me) features: 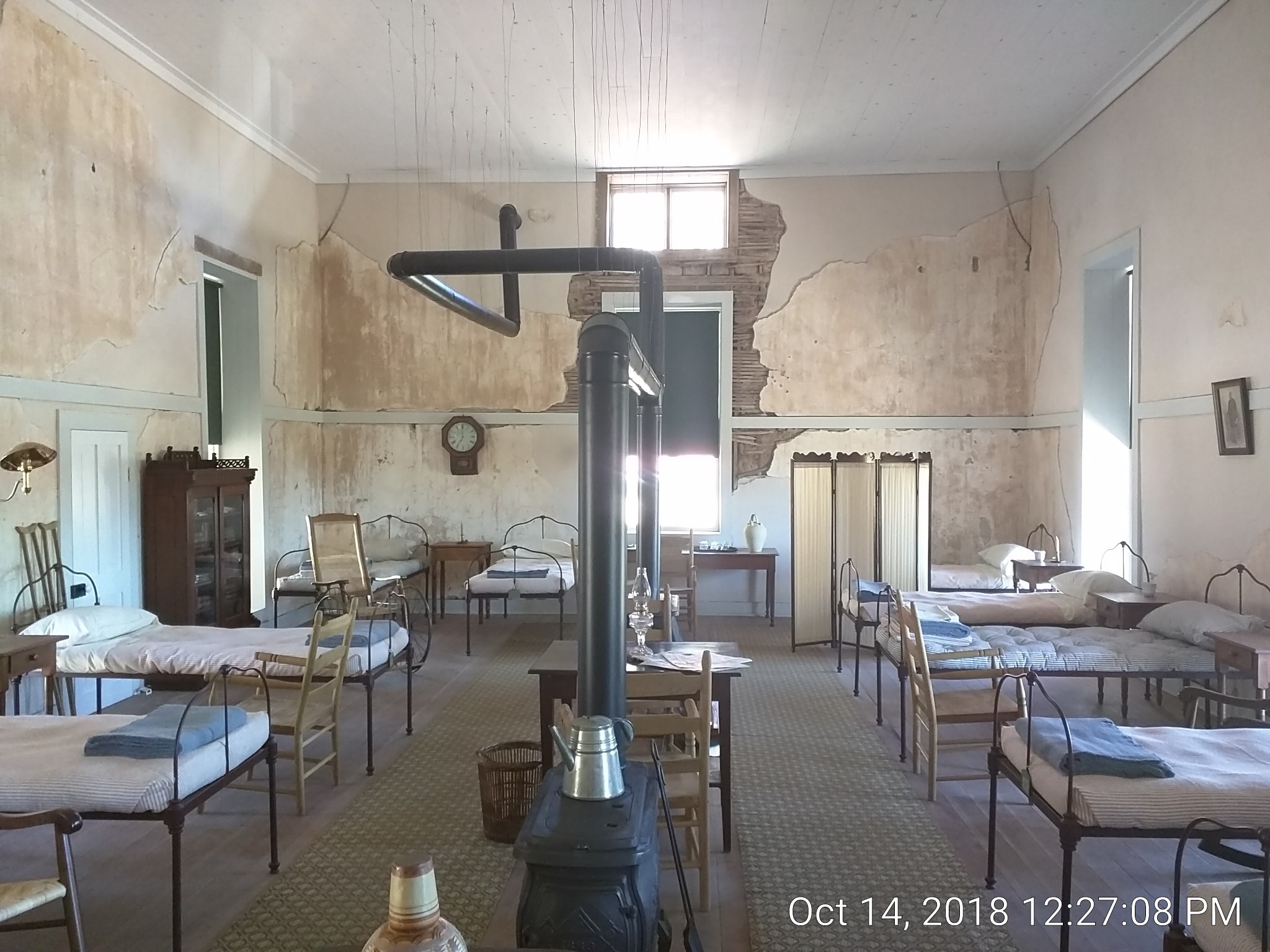 The beds were short and remarkably small.  Reminds one how much bigger (and fatter) we are now.

I walked down a dual track path as far as the hills allowed;  at that point the national historical site abuts the state park where I was yesterday.  The terminus was a loop: 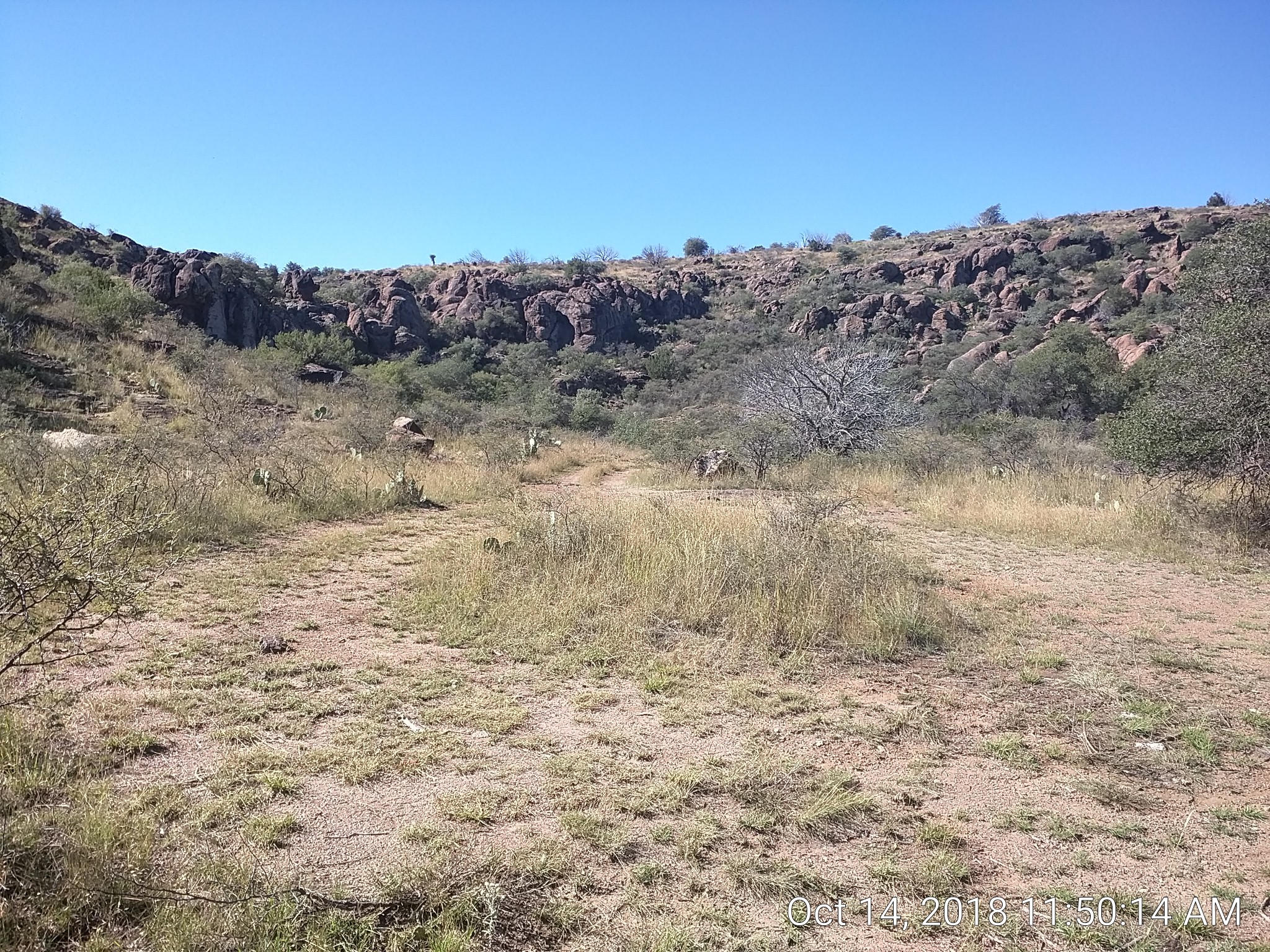 Nearby was a tin-covered wooden structure, maybe 3’x3’: 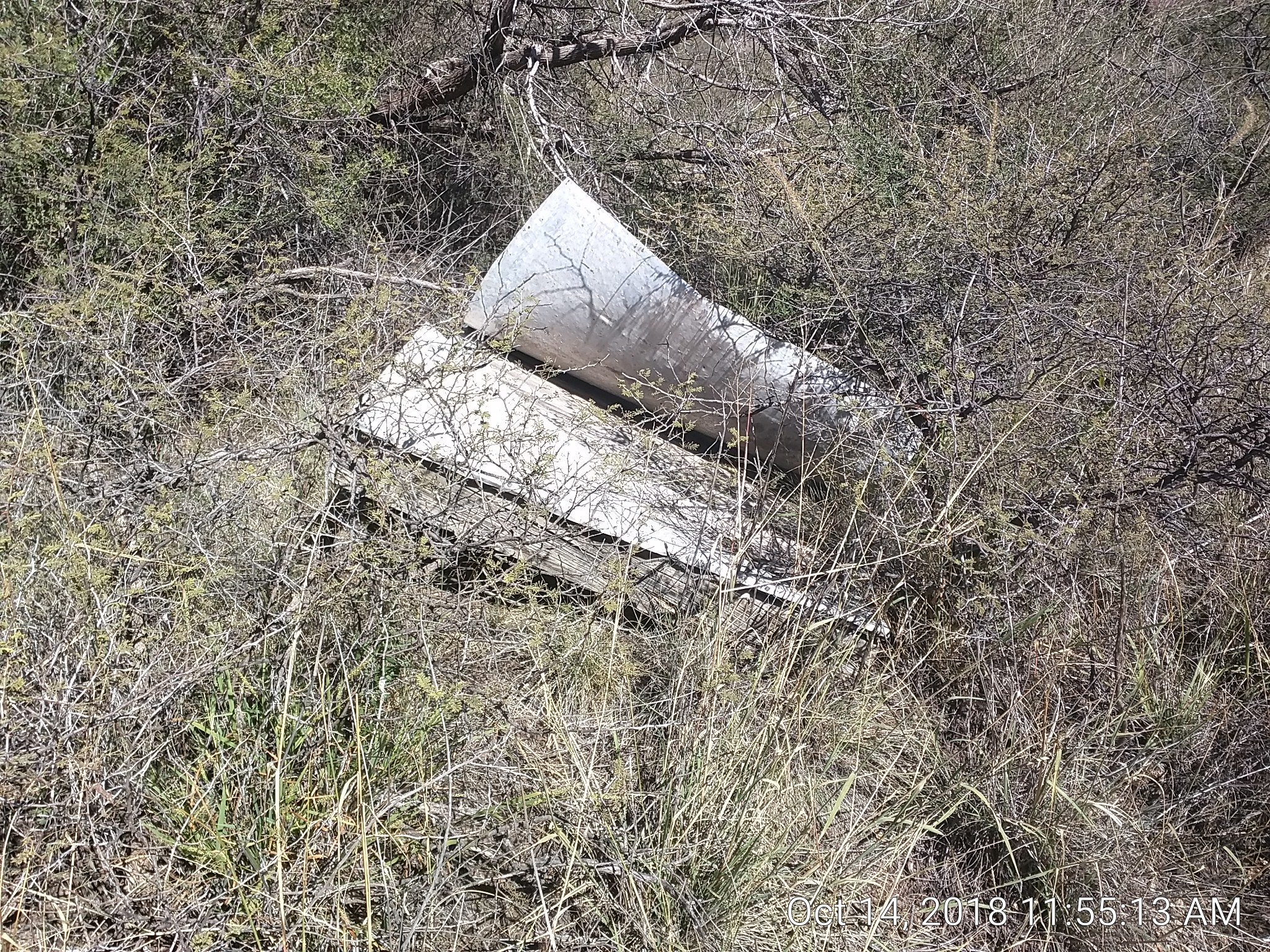 It is slightly elevated off the ground, maybe 6”.  I think it covers a spring, since there is a bit of a wash over the trail leading down to a creek that runs to the built up  area.  I didn’t look for it, but I figure they ran it into a cistern.

Dunno if I was strictly allowed back there (it’s not even on the tourist map) but I found many small artifacts on the way.  I used a 3.5” pocketknife for scale. 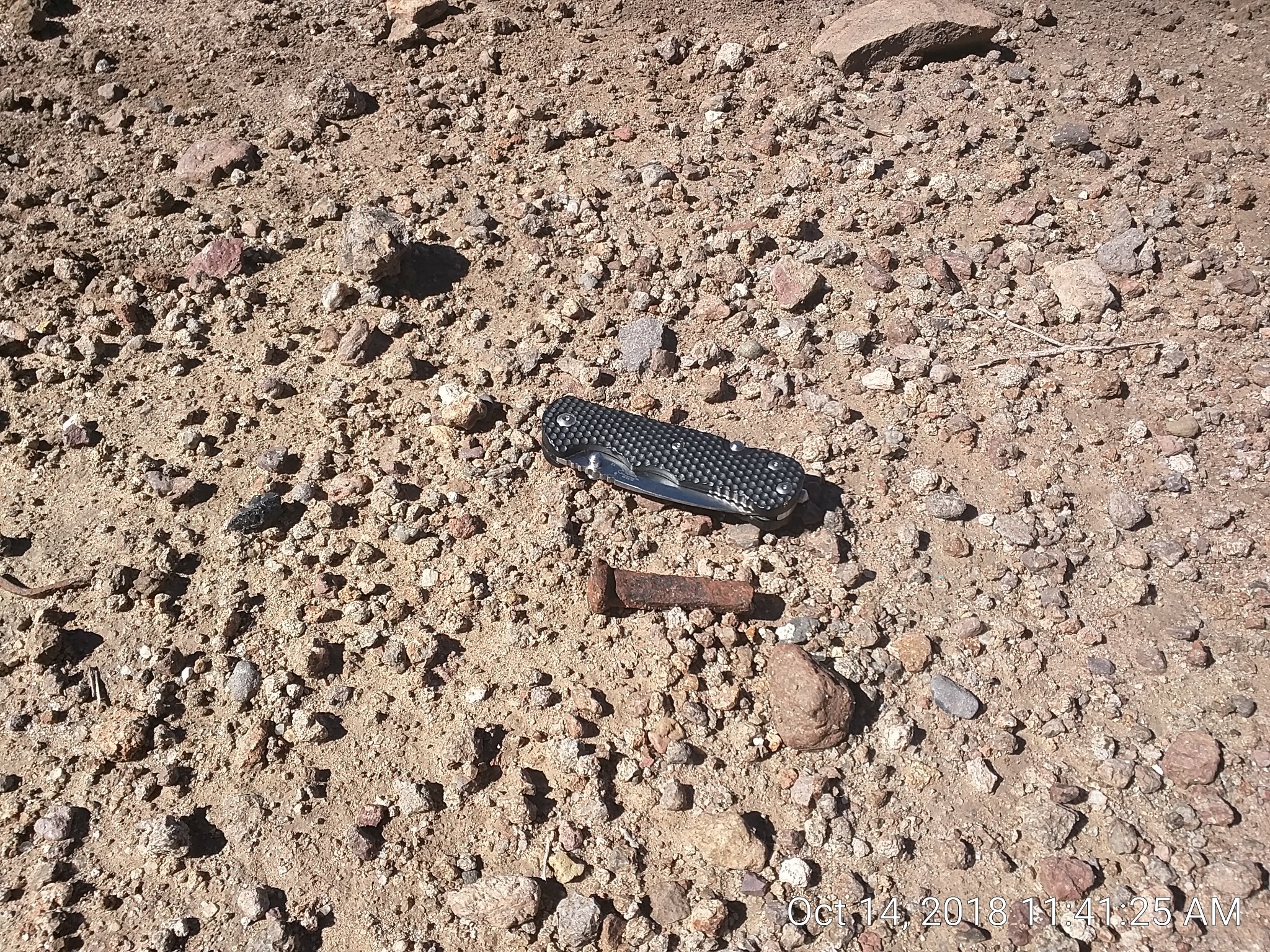 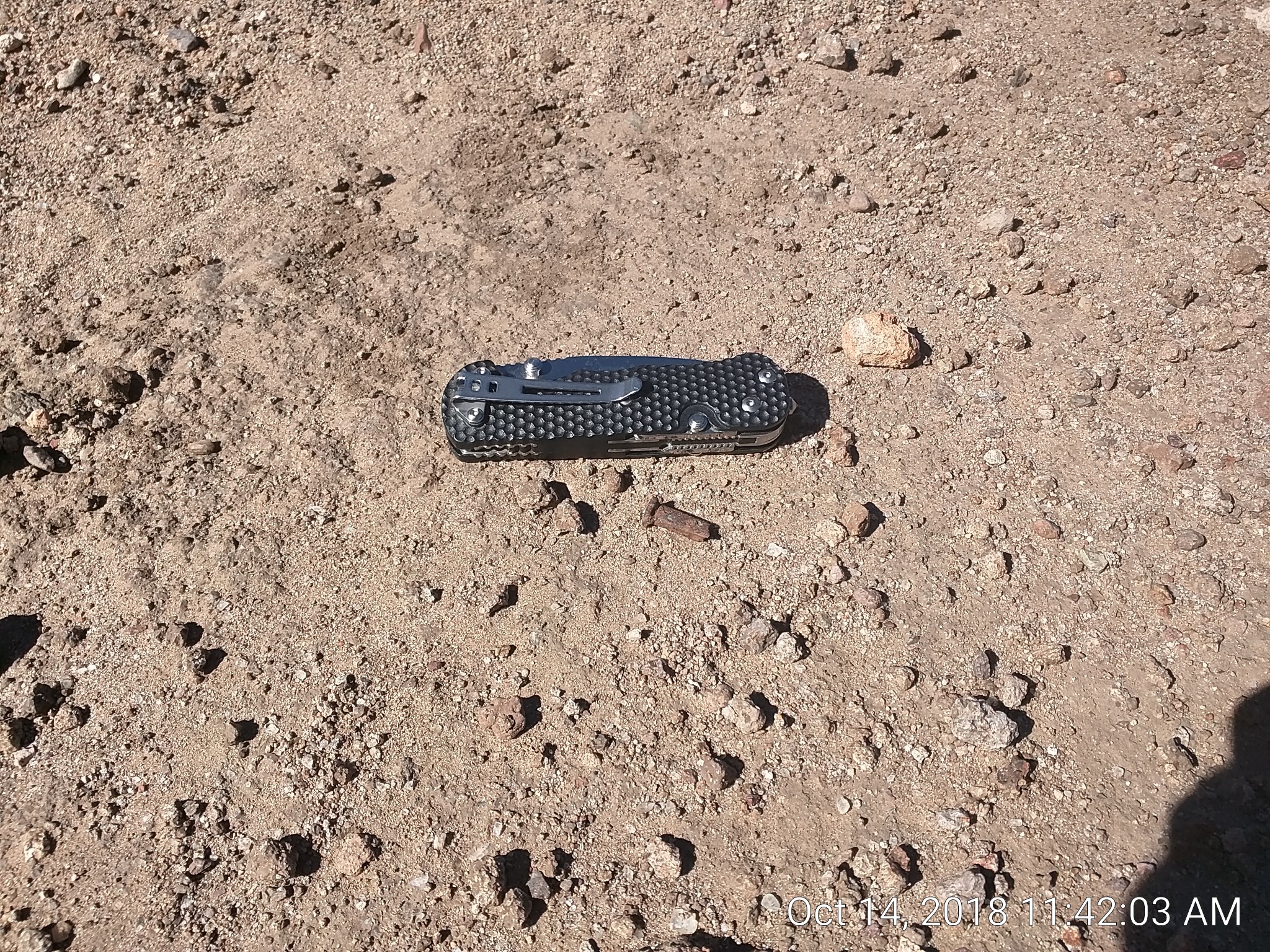 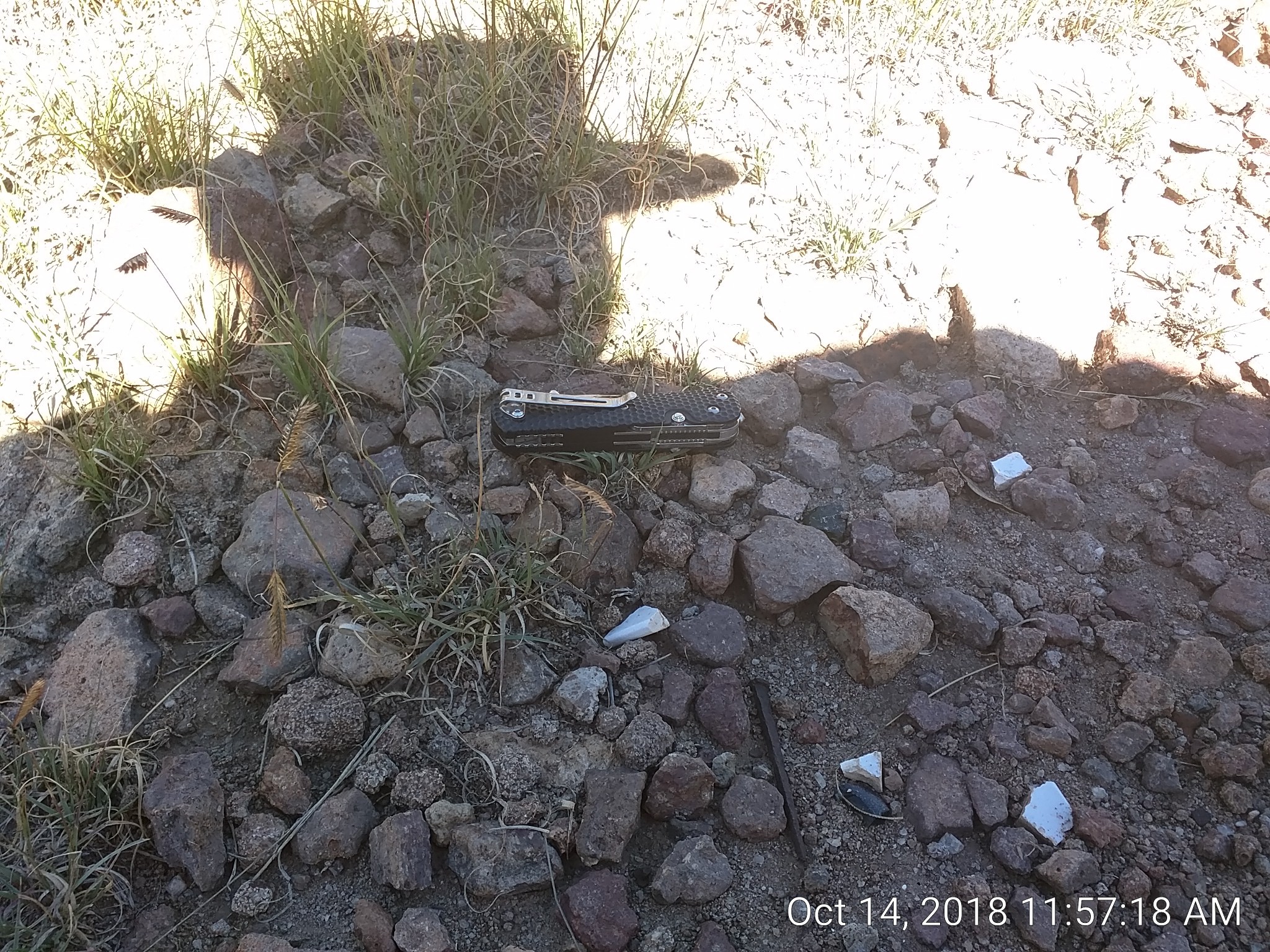 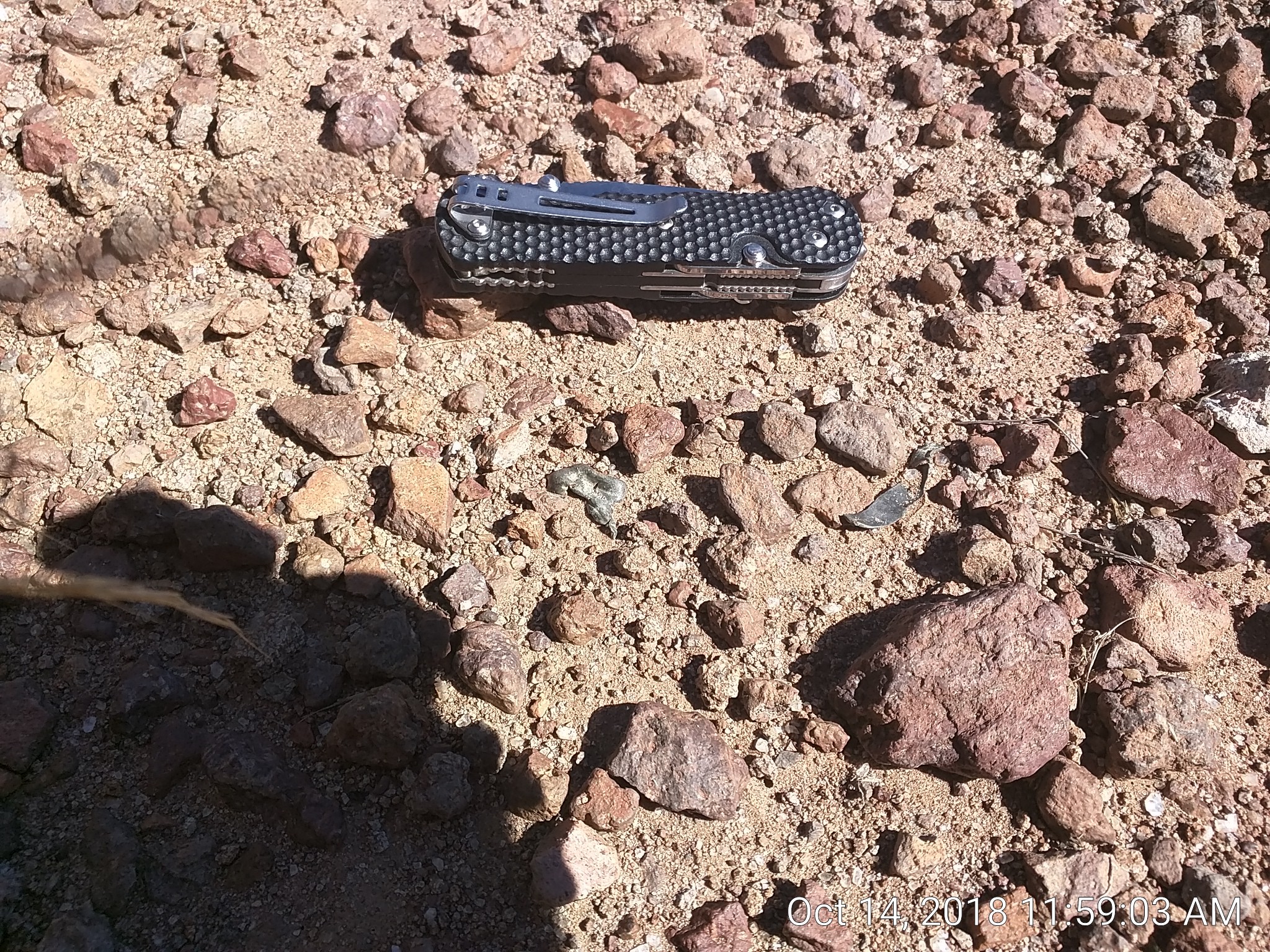 A couple feet away was a nearly intact bullet: 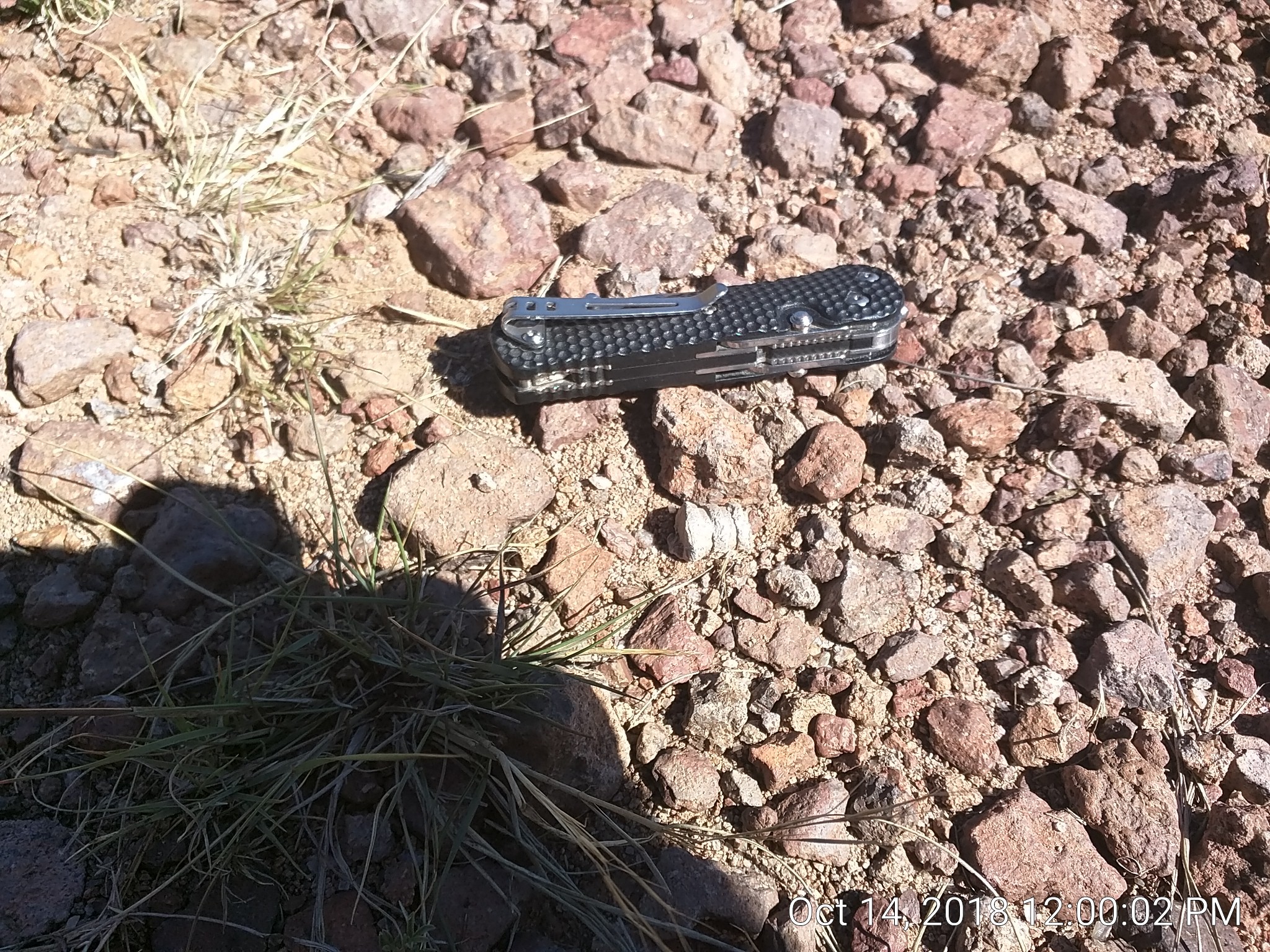 Reminds me of a Minie ball.  There were weapons of various levels of modernity, from muskets to .44 and .45 revolvers.  The .44 were reloadable, as far as I can tell.

A spent (and flattened) pistol cartridge.  Note the rim: 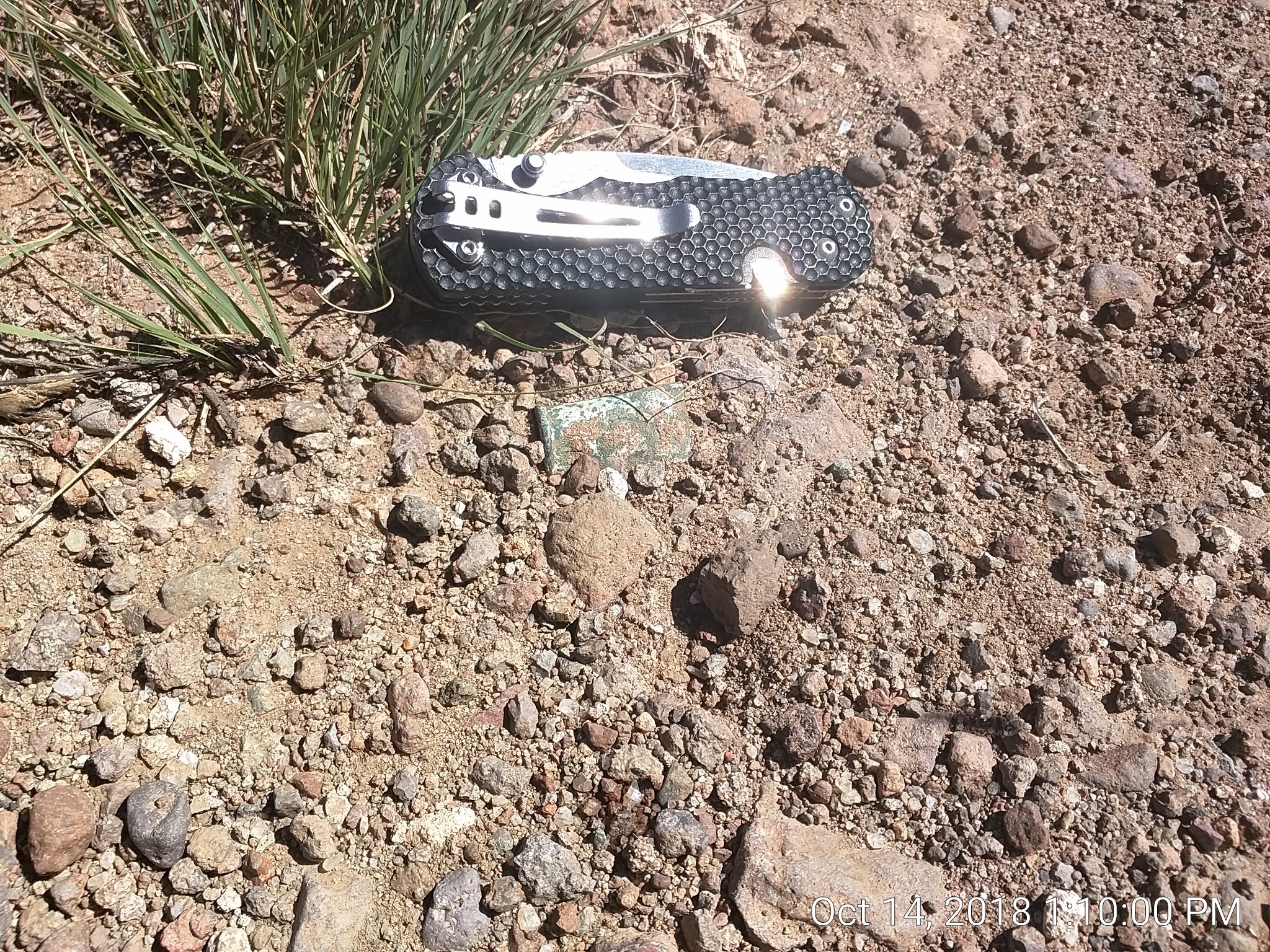 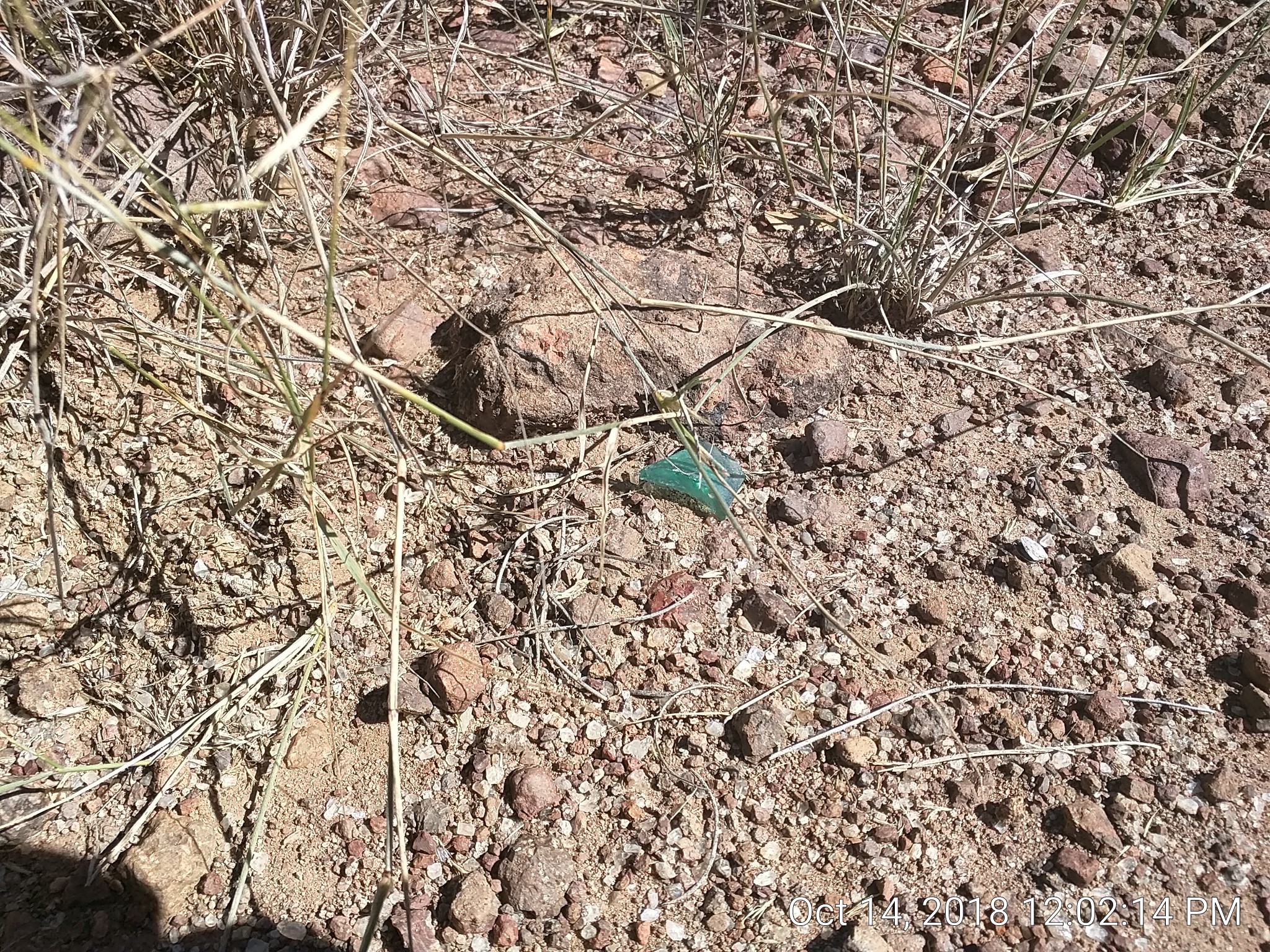 Finer cobalt blue glass (much darker in reality than in the pic: 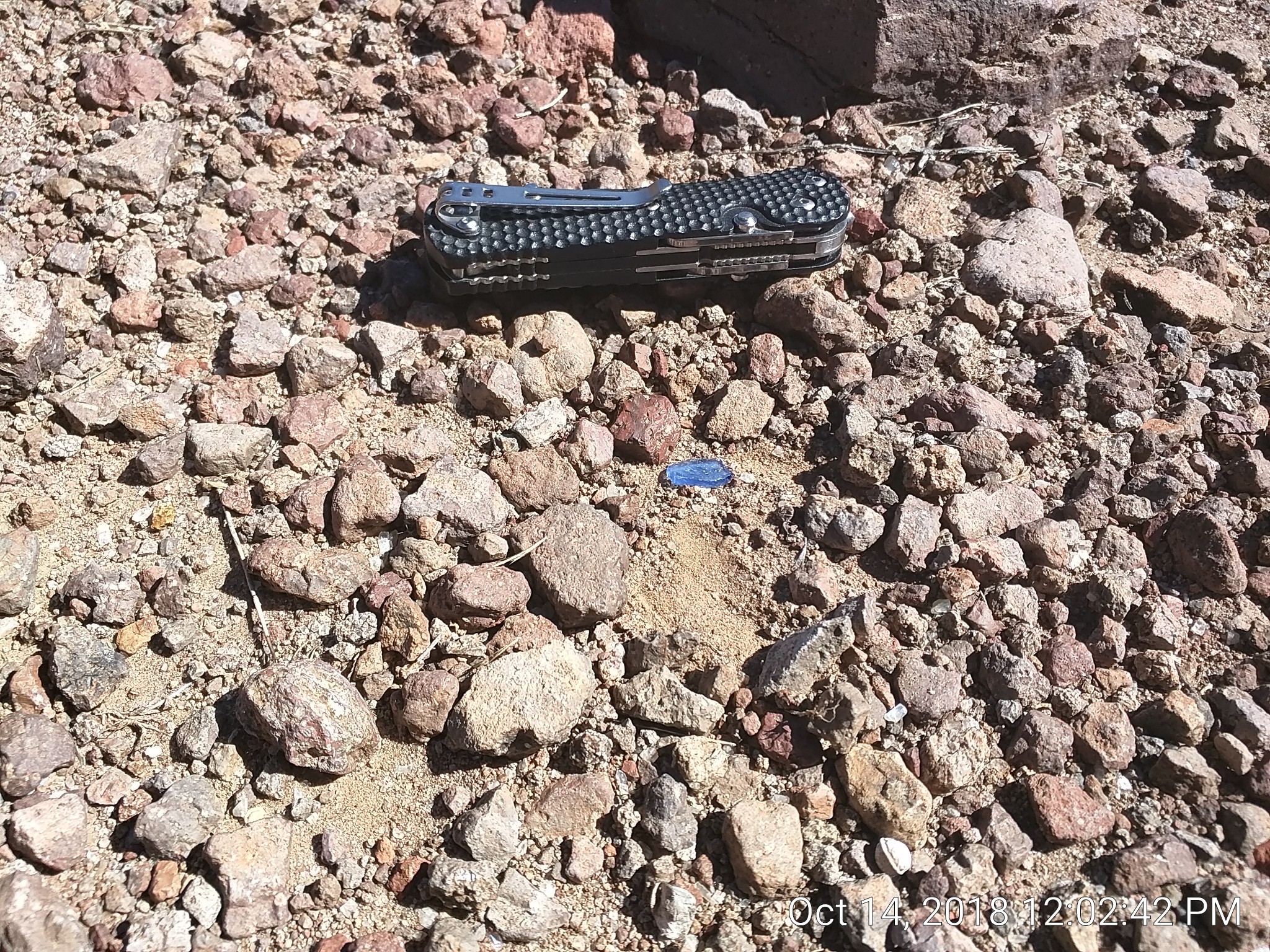 Brown glass.  You can see how thick this stuff is.  Maybe from a jug or other heavily constructed item? 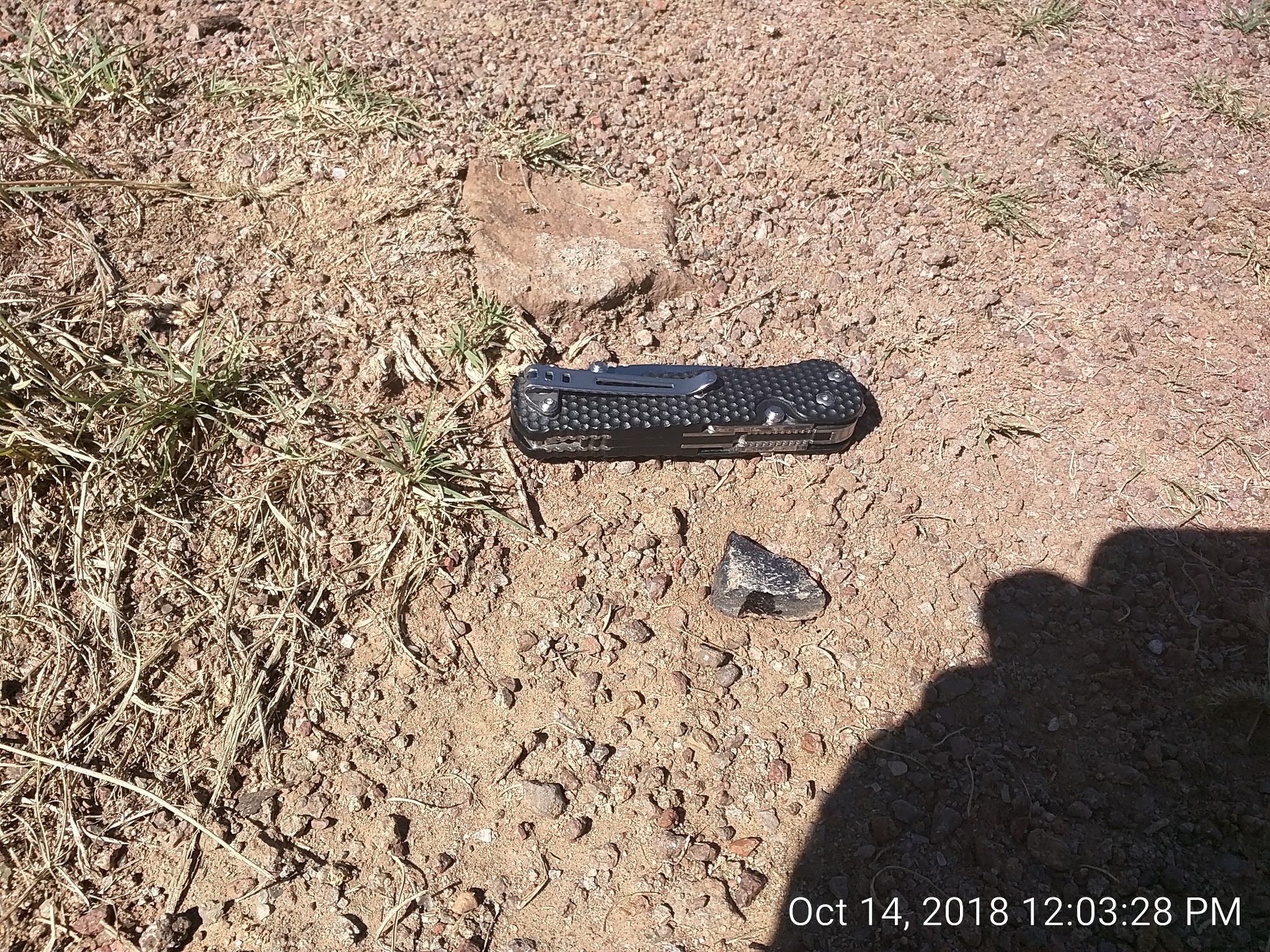 What appears to be snowflake obsidian: 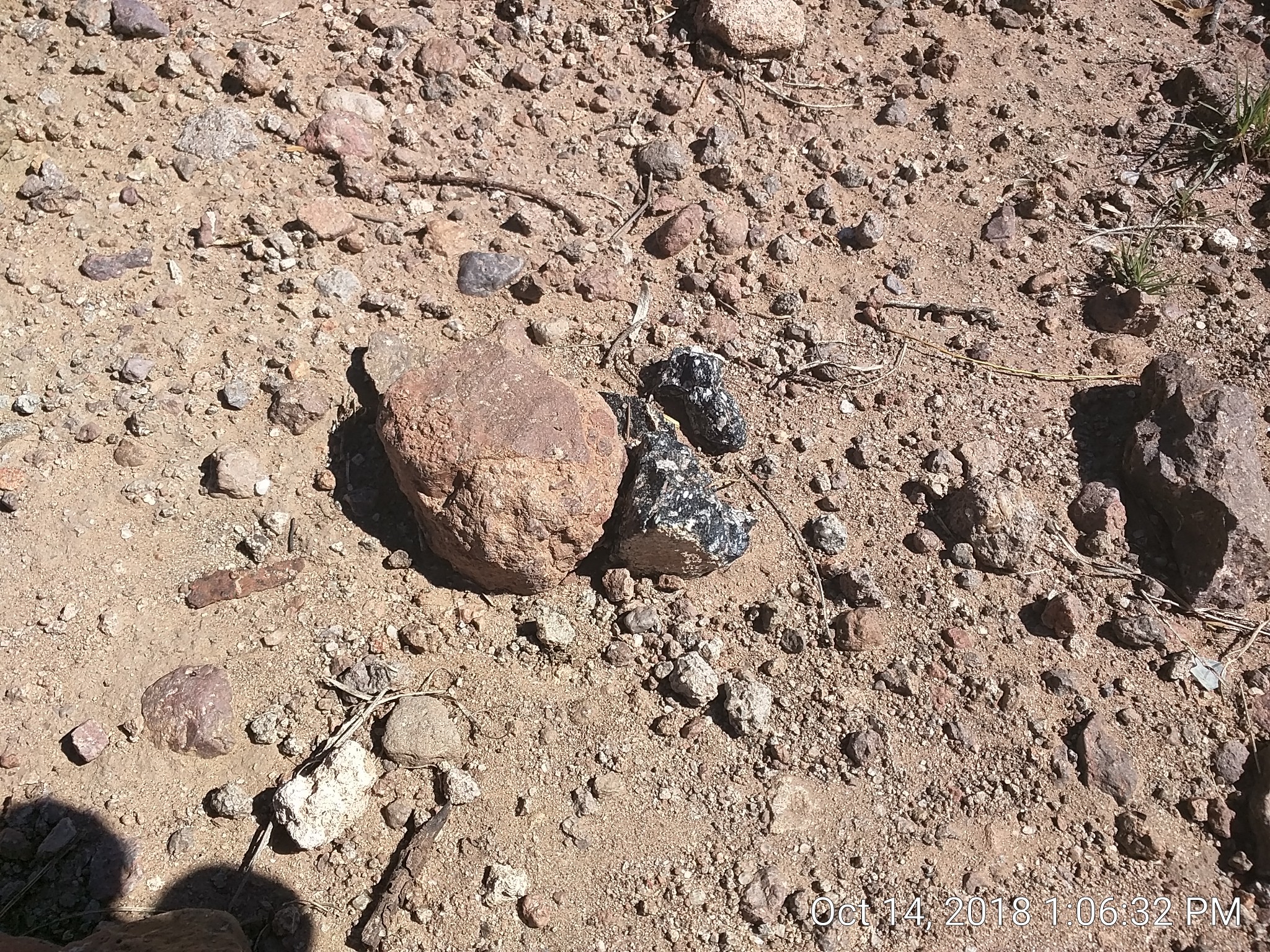 I’ve seen obsidian in NM before, but if this is obsidian it’s the first piece I’ve seen in TX.

A final pic.  The path going across the pic is the old San Antonio - El Paso road, which the Fort was intended to protect. 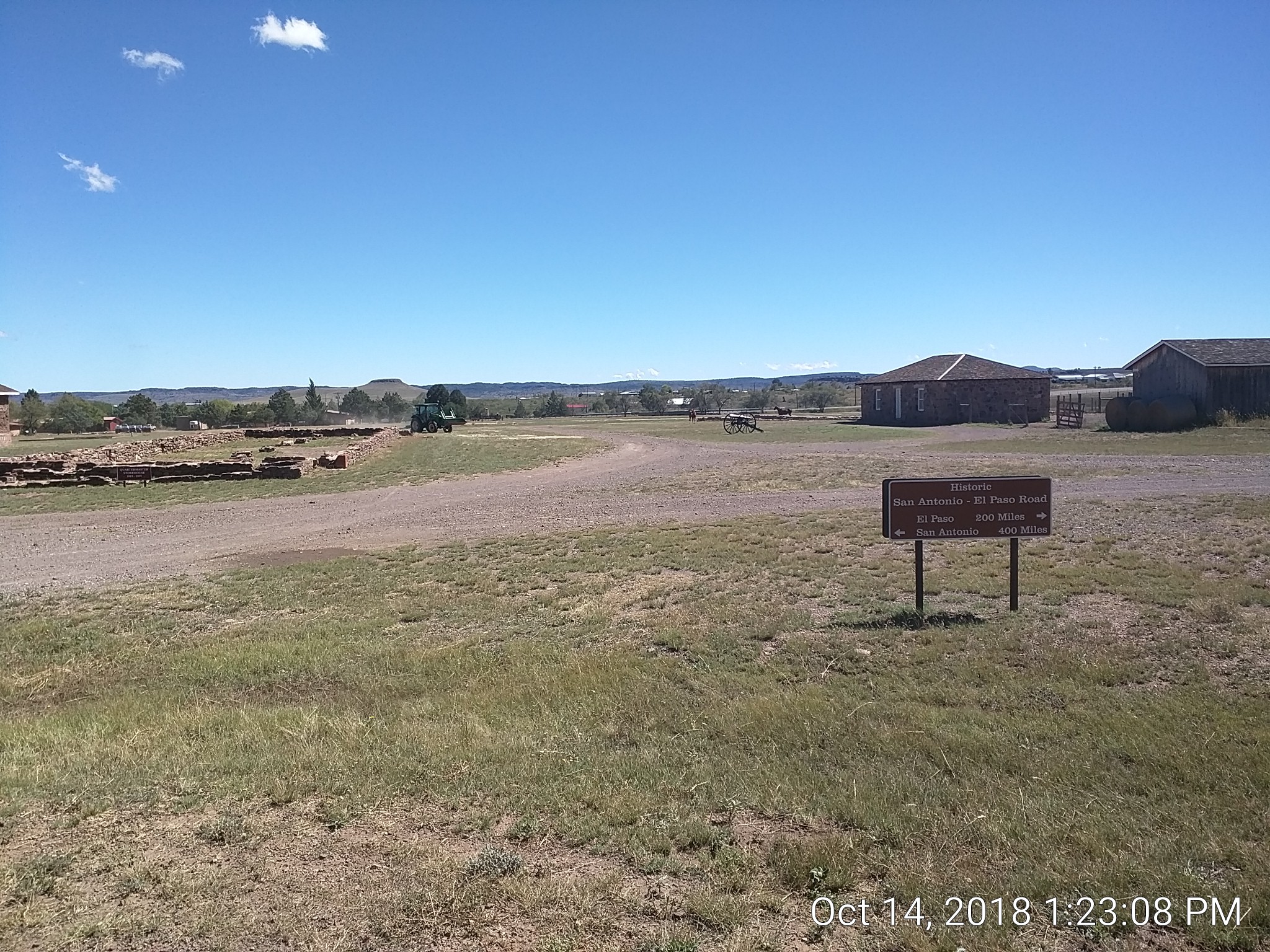 About 200yds behind the sign (above the cannon) you can see guardrail from modern highway SH118 which goes to El Paso.  So the folks back then had a pretty good read on the best route.

There are two horses in the cannon area.  They have stables and a fenced in area nearby but the gate is open and they are allowed to roam.   I didn’t see any open troughs of water outside of their stables so they probably go back in voluntarily to drink and feed.

There is a little grocery store in town that is surprisingly well-stocked and fairly priced, given their geographical isolation. Some kind of cattle dog mix was outside and came over to me.  Good dog.