October, according to Google 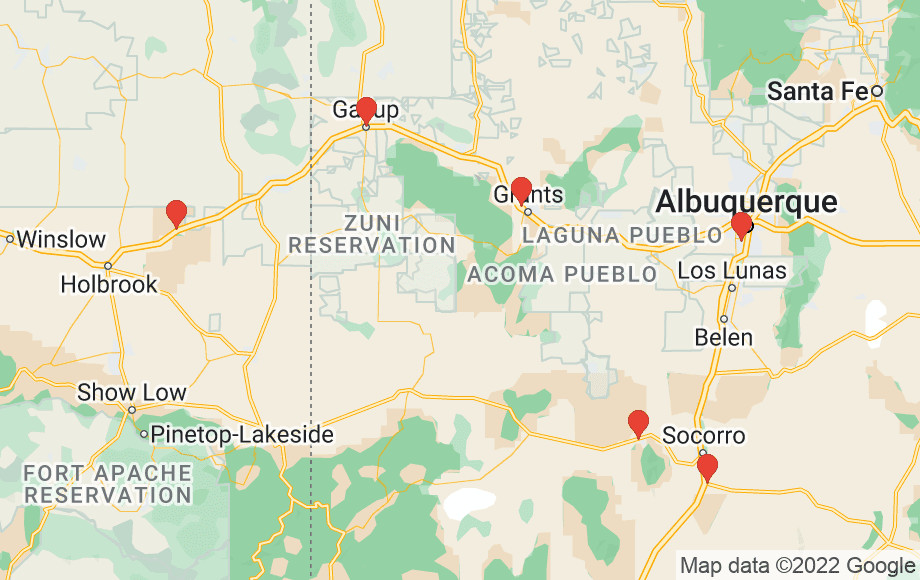 That’s (part of) the Big Picture. Let’s break it down.

It was starting to get near freezing in Flagstaff. And I knew I needed to get to El Paso for the reasons given below. But it was still too hot in ELP to go straight there. Not to mention gas was still well above $4/gallon.

I would need a place to hole up for a while until temps got cooler in ELP. I am familiar enough with ABQ that it made a decent waypoint. Lots of parks, dog parks, and street parking for overnight spots.

After about 10 days in ABQ temps were looking like they were going to cooperate in El Paso. A big northerly storm came through this part of the southwest. The next day the rain was gone but the north winds were still blowing. That was my sign to head south.

My original thought was to stop half-way at Truth or Consequences but the tailwinds were so generous I pushed through. I don’t think I saw less than 23mpg on any flats stretches along the way. The overall average was 26.3mpg with several stretches of >30mpg. Not bad for a Giant Rolling Barn. I was grateful for the dramatic reduction in fuel costs for the trip.

getting stuff done in El Paso

Job 1 was getting VA stuff straightened out.

The main issue is that my primary care doctor there “dropped” me.

When I knew the timing of leaving Flagstaff and the approximate timing of hitting ELP I called my VA satellite clinic to schedule the appointments. The clerk said I didn’t exist. The best I can figure out, this had to do with missing the Feb 2021 annual exam. I was in AZ then so the VA and I arranged to do that stuff in Yuma. Maybe this didn’t amuse the Primary or maybe she didn’t care.

The clerk said the satellite wasn’t accepting patients (even though I’d already been a patient there) and that he would put in a request at the main VA hospital. I didn’t like it but there isn’t anything I could do. The hospital is technically on an Army base and there are things you can’t bring through the gate. I have some of those things so I have to park outside the base somewhere and walk in.

Of course, I heard nothing back from either the satellite or the main facility.

I walked into the hospital and was intercepted by a helpful administrator. I know, it surprised me too. He verified I had been assigned a Primary there in a certain clinic. Fine. He walked over with me to the recep but she was unimpressed and did her “I don’t care and I am so bored I could fall into a coma” impression. It took a few runs but I finally got her to look for an open date so I could do the intake/annual. Soonest dates were Dec 15th for the labs, actual appt to follow.

Fine. I wasn’t intending to be here that long but whatever.

I asked about getting vaccines for seasonal flu and shingles, and for a Covid Booster. She dragged her feet and finally said she’d “message the team, have a seat”.

Two hours later I was called in by a nurse. Miss Coma had messaged the wrong group and the nurse was mortified. The nurse told me the flu/covid shots were elsewhere across campus and that the shingles shot was “a bad one”. Better than another case of shingles, I decided.

Since that arm would be out of order for a while I got it in my right arm. That was is already out of order due to the rotator cuff injury so no further harm done. Affter the requistive “sit here until we know you won’t keel over from a reaction” wait I bopped across campus to the other vaccines.

The recep had caused such a delay that the vaxx station was about to close up and was already out of Covid for the day. Fine. Gimmme the flu in the left arm. I came back the next morning (parking off-base) and got the Covide booster. It was the Moderna Bivalent which works against Delta as well as Covid Classic. Took that one in the left since the shingles arm was definitely angry.

Thanks to the three shots the next few days were Not Awesome.

The shingles shot is a two-hit deal (yay!) with the 2nd one 60 days later. So I’ll deal with that the day I come back for the Primary appointment.

I wasn’t the only one suffering. Muffin’s shots were due and later the day of the Covid shot I saw a mobile vet clinic. So she also got three doses: rabies, distemper, and bordetella.

She doesn’t mind (or even notice) shots but HATES HATES HATES getting nasal doses. She will pull away from it and she’s really strong for her size. Based on last year’s dog-wrestling fiasco I decided this year I would hold her off the ground. So she couldn’t use her leg strength. She still fought to get away but there was nowhere to go….

Back to the VA. On that first trip I also stopped by the optical shop to order glasses. Go down to the 2nd floor and turn in your prescription there. Then come back here.

The optical tech wasn’t bored so she made up for it by being hostile. There were other Kafka-esque bureaucratic stupidities involved but I won’t bore you with them.

Back in Flag I’d left a roll of toilet paper outside since it wasn’t going to rain. The next day most of it was gone. Nesting birds, I thought.

I also noticed when I shifted into Reverse to leave that the linkage seemed chunky/sticky/jammed. Weird. And 4 different Check Engine codes popped (airbags, tire pressure, fuel cap and something else).

The vehicle drove normally and pressures were good so I waited to look around. When I opened the hood in ELP I was very confused. The engine was not visible.

Something had dragged the toilet paper, charred wood from the nearby fire pit, and sticks as thick as your thumb into the engine bay. It was full. I removed two Home Depot buckets worth, each tamped down with my foot so I could make fewer trips to the trash bin.

The shift linkage had been physically jammed with sticks which explains the hard operation. I’d to think that something is jammed, causing the other CEL faults but that’s not likely. It’s far more likely that the rodent chewed through a wire, causing weird electrical problems that will be difficult and/or expensive to repair. As I mentioned the vehicle drives normally so hopefully they are all from the electrical confusion.

I suspect the ground squirrels in Flag. They are definitely strong enough to move those sticks around.

Since I would be in ELP through December and will need ground-squirrel-repair fundss I decided to look for seasonal work.

I applied around Halloween and they sent an acceptance email on Nov 3rd. Still more hoop-jumping to go, so it’s not a done deal.

Sorry it was so long. There was other stuff going on but I don’t have the heart to write it up. I need more menudo.