Muffin and I took a walk down FR171, east along 9229R and back north toward the gas pipeline right-of-way.

There were some old (30s or 40s?) concrete foundations. 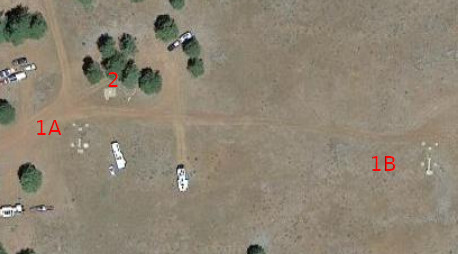 foundations 1A and 1B

Some kind of radio or navigation aid foundation? The exposed rebar is 1” and there are some metal pipes with wires visible in them.

On the way back the mosquitos were bad enough that I swore to put up my magnetic screen door on the side and some netting on the back.

They are both a bit of a PITA and both functional. Skeeter populations in the van are greatly reduced.

Also on the way back I noticed significant movement in a tire rut with standing water. The amount of disturbance was more minnow-like than what one would see from an insect. I scooped my hand in and found triops (tadpole shrimp). They are sold as pets like sea monkeys (brine shrimp) but are much larger and interesting. I had some triops on my work desk in the 90s and they were a big hit in the office.

They do eat mosquito larva so I am officially Team Triops.

I scooped some out later and put them in a mason jar of filtered rainwater. I put a couple flakes of fish food in there for them to nibble on.1 Not sure if they will do well but their muddy water was drying up quickly anyway. I don’t think they were going to have enough water to live the full 90d span.

A short video of them in the jar.

Visible at one month

TL;DR put away the credit cards until you understand how stuff works and what you actually need.