In a perfect world, monsoon rains would happen every afternoon but the dirt roads would dry again by the next day. There are confounding factors:

One of the criteria for this relo was to find a campsite closer to hard-pack roads.

hopping over to the Cococino NF

These particular NF don’t have the same mileage-based relo requirements like BLM lands do. Since Cococino NF and Kaibab NF abut near Flagstaff one can hop back and forth and have only a few loose days a month1 to sort out.

I hadn’t been in Flagstaff in summer before and was skeptical of claims that temps are relatively stable in the lower 80s. There’s been variation, of course, but so far it seems to be holding. This week will be warmer, mid-to-upper 80s.

Unfortunately, monsoon season brings clouds so an ample solar means Just Enough Power as it does in winter. So we have two competing requirements:

My solution, as in the last site, is to camp in an open spot with a line of trees to the ~west. This allows full sun up to ~noon then shade afterwards. 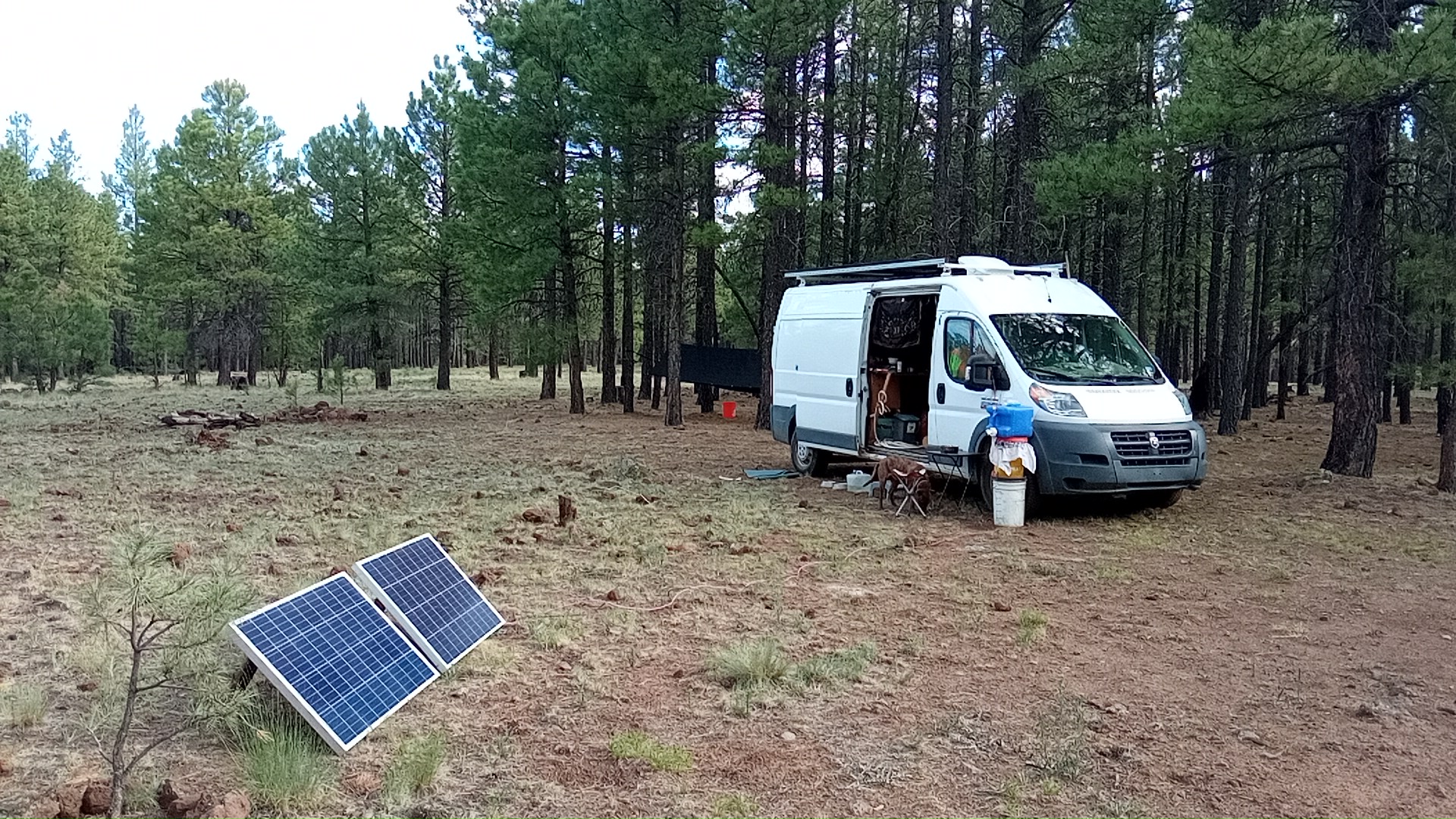 The portables are facing ~west.2 It’s unorthodox but the idea is they take over when the main/mounted array is shaded. In the background is a surprisingly-great $16 hammock with an 8’x10’ shadecloth “ridgelined” over it. The orange bucket under the edge of the shadecloth is for low-effort3 water catchment.

I found this shoe in the previous campsite in a clearing among the Ponderosa pines. Some of the features are more uneven than rusting would suggest, so it might be handmade by a farrier rather than bought commercially. This does not necessarily mean it is older than the advent of pre-made shoes since some shoes are custom-made even today.

The protrusions on the bottom side are caulkins:4

Caulkins or studs improve a horse’s balance and grip over uneven or slippery terrain, allowing the animal to move better and jump more confidently in poor footing. Screw in calks are most often seen in speed sports, such as eventing, polo, and show jumping, although they are sometimes used for dressage. Forged caulks of various styles are more often seen on race horses and working animals such as draft horses and some packhorses and trail horses, though in some areas they are still seen on field hunters and other riding horses that have to work in all weather and require extra traction

Given the area in the pine forest I’d think it was used on a logging horse. Anecdotal evidence suggests horses were used for logging at least until the 1930s around Flagstaff. In many places steam tractors were replacing horses much earlier but I suspect the large rocks and dense forest here made the more-maneuverable horses practical until later on.

The shoe is ~6.25” wide and 7.25” long. The hoof must have nearly fit the full width of the shoe or the nails wouldn’t have held it. I do not know if the hoof filled the length of the shoe or not. Going by this chart: 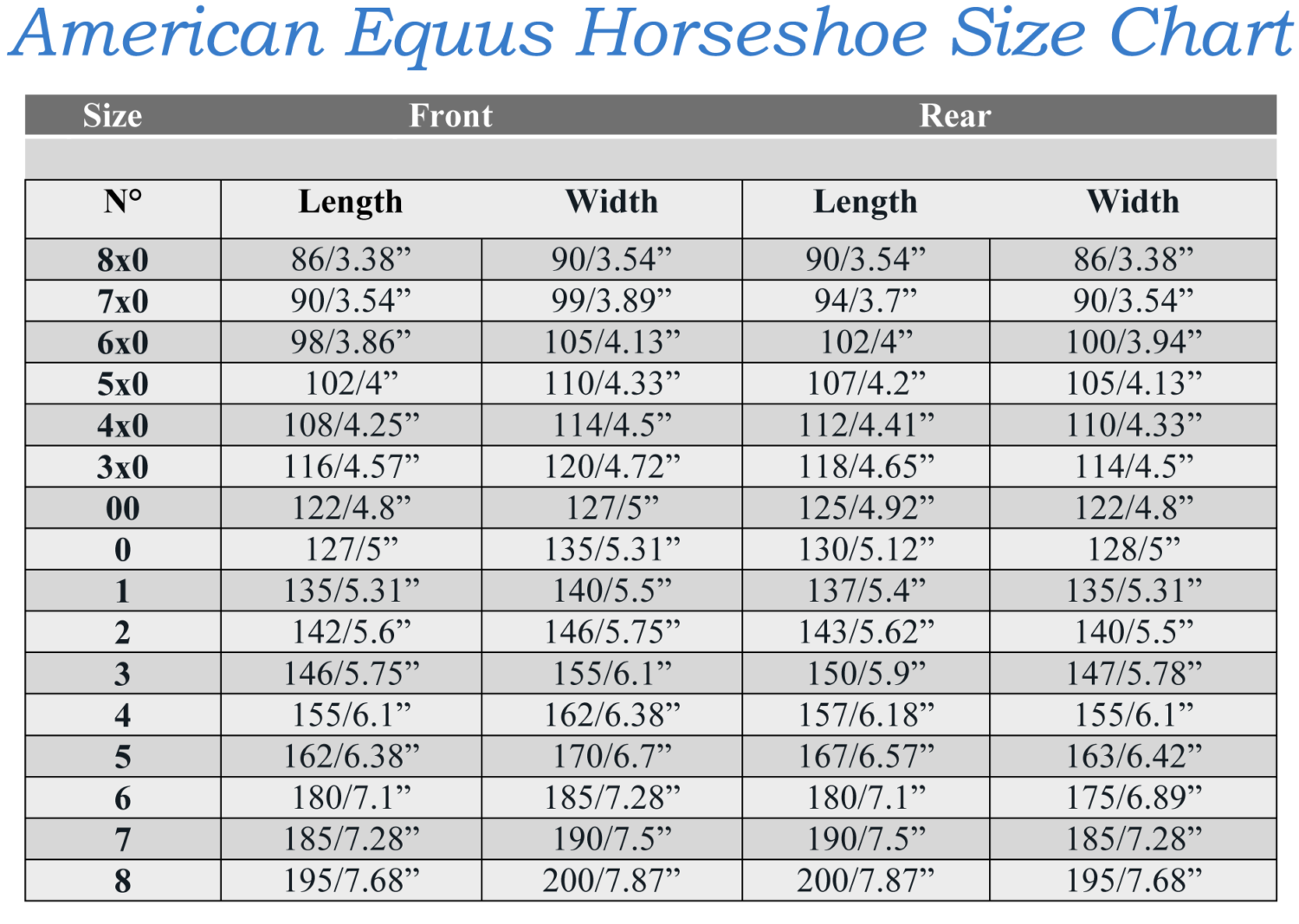 The {front} caulkin is not straight. If it was intentionally angled the shoe might be for the right side of the horse. Reasoning: in that position the lug would provide better traction toward the horse’s center line rather than splaying outwards. So I’m guessing it was a right rear shoe.

I would very much like feedback from horsefolk or farriers on these guesses.

what I’ve been watching

Season 4 of Westworld may not be worth the download. Lazy writing and needless sloppy continuity errors – feels like a cheap and grubby money grab. They really should have stopped after S2. Cf. Lost.

After hearing people rave about National Treasure for years I finally watched it. It is intensely stupid. It was so bong-hittingly idiotic the only analog I could come up with is Dan Brown’s Da Vinci Code. “Oh, it’s spelled backwards” [knowing nods all around]

Palate cleanser: The Tunnel (PBS via BBC) is smart and taut. I heartily recommend Season 1; seasons 2-3 are better than average but can’t live up to the freshman season.

Update on stove, laptop, and weather

Google says I was here