I met the Craigslist gentleman, who had what appeared to be at least 100 Trinasolar panels (SS250P-60) pulled from a solar farm. There’s not a lot you can do to test panels, so I did a visual inspection, label check, and Voc tests with the multimeter. There is weathering but no snail trails, not that I’m convinced they’d be a performance problem.

I can’t do the actual install for the next couple of days because of wind, but I needed to lay them out to make sure my imagined geometry matches actual geometry. I wouldn’t have any flat surfaces on BLM land so I did it in a city park parking lot before leaving ELP:

The steel runners are 12’ long and 65” apart. The panels are 39” wide so three in a row is 117”. The open area near the camera is spacing for the Maxxfan. Here’s a pic of the existing setup from the side: 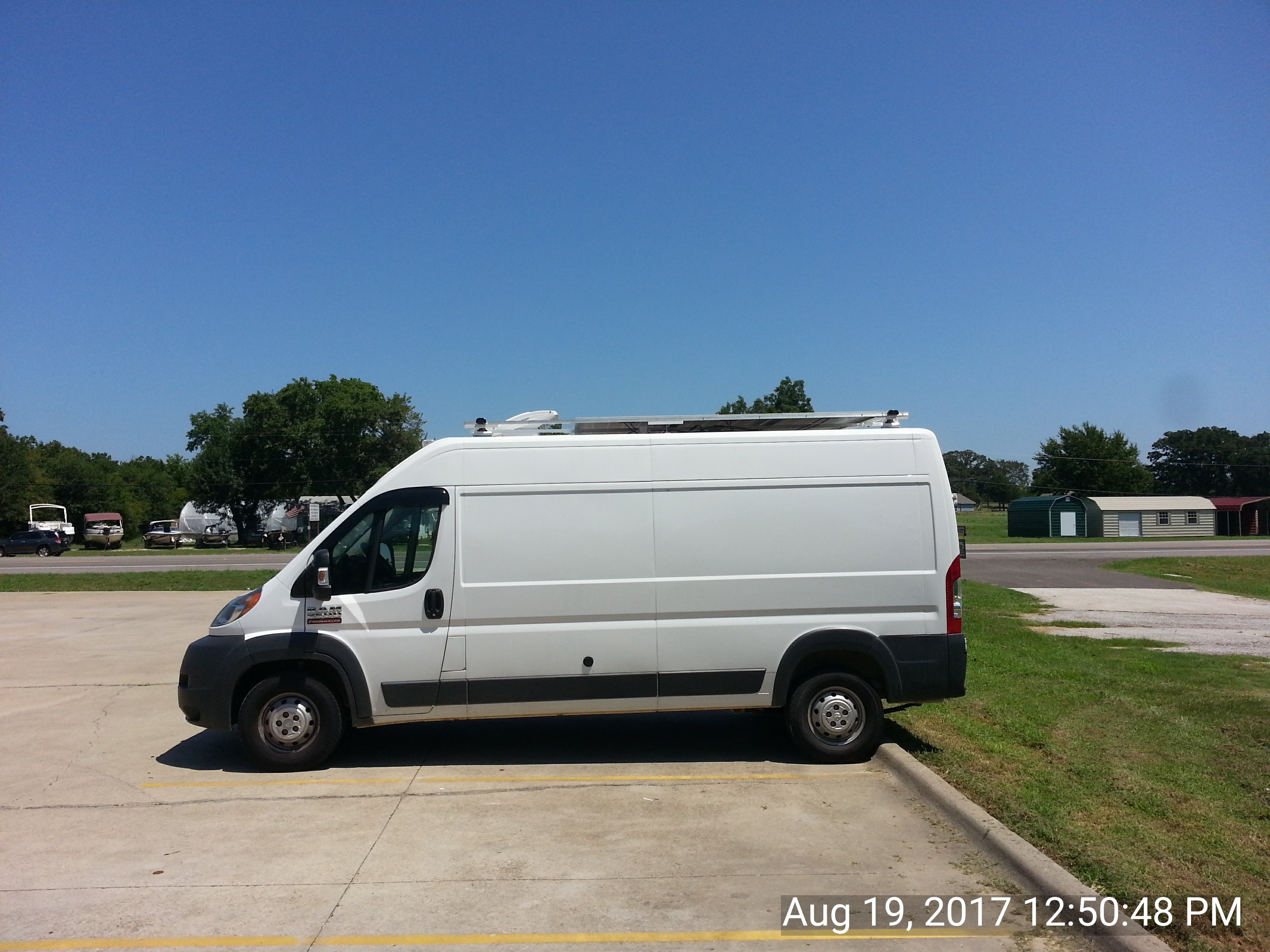 My original plan was to mount the panels between the runners but my rack crossbars are 65” wide; this means these particular panels will need to mount on top of the runners. This will make for much simpler installation (the panels will lie there on the runners while I work on them), but has two minor side effects:

The top-mount means the panels will have to be bolted through their bottom frame edge. Since I won’t have enough clearance to do this after the panels are on the rack I took the ground layout opportunity above to clamp the panels to the runners and drill the mounting holes. I already had one “homer bucket” for water decanting so I picked up 3 more to make poor man’s horses.

Drilling upward toward the underside of the panels was a bit scary; I used a metal spoon as a backing to keep from overpenetrating. I ran the bolts through with all the washers and nuts to ensure it worked; it did. An unexpected win after a hard month.

After that I put the panels back in the van and strapped the runners back onto the roof. Hopefully I can do the install later this week so I can get these ginormous things out of the the van’s living area.

I know you’re tired of hearing about the fine people of ELP, but this was illustrative.

The seller was building out a little 5th-wheel Scamp trailer and was eager to give me a little tour. He was using a Big Battery 12v pack, which I didn’t know existed – I thought they were all 24v+.

I paid up and he helped me move the panels. I got $3 back in change and wondered aloud what I’d do with it; he suggested buying a beer and I agreed. Since I was in ELP I mentioned getting Carta Blanca, which is like Modelo Especial but less expensive.

It took me a few minutes to tetris the panels into the van and he came back around. At first I thought he was curious why it was taking me so long to leave, but instead he was bringing me a cold quart of Carta Blanca from his refrigerator. :-) I stored it in the fridge and had it last night with dinner.

I forgot to mention a couple things. arm still sore from the first covid shot (Moderna, according to the paperwork) but nothing special

The current injured setup is 380w:220Ah, or 1.7-to-1. With the old 2.59-to-1 I would rarely see over 50% of rated during charging because the panels harvest more amps earlier in the day. So why have more panel?

Longer bulk duration suggests Abs duration will be shorter. I’m guess maybe 3-3.5 hours instead of the usual 4-4.5. So maybe by 3:30p? I’ll set an alarm to remind me to check.