A few days left here in Shea Rd.  My 28d cooling-off period for Quartzsite is up on the 5th.  The Q dump transfer station is open next week until the 6th, and I’d like to drop off trash before getting set up in Q.   So I relocate on the 5th or 6th.

My internet connection started out usable, then became less and less usable over the past few days.  Down to 2400bd modem speeds.

The area that previously held 6 campers has swollen with holiday+weekend partiers to over 50.  Lots of generators, late night dirt blasting.  Fine, it’s their land, too.  The cherry on the sundae is the predominance of “insane clown circus music” as my buddy said in ELP:  OOMP oomp OOMP oomp oomp OOMP oomp OOMP.  The NYE celebrations also included fireworks and celebratory gunfire, both of which are not allowed

More seriously, I failed to accurately calibrate my water usage to a firm 28d between reprovisioning.  I know from prior experience that the 35gal tank really can last a month if I’m paying attention.

I’m deliberately staying the full-pull 14d in order to get the 28d timeout working.  In normal cirumstances I might stay 10-13d if there was a reason I wanted to leave a little early.  Those shorter outings add up to 20-26d on the 35gal which is ok even with some wastefulness.

Example:  in water casual mode I might overfill the dog’s water bowl slightly, spillling some over the edge.  Spongebaths  use about 4c of water. Lots of cooking with dry ingredients.

In water conservation mode I’d be careful not to overfill, and would also re-use cooled pasta water or whatever to top off her bowl. Spongebaths use about 3c of water.  Cooking more with canned or similar ingredients that carry their own liquid.

This last month I was in water casual and needed to be in water conservation.  This morning I had 4 gallons and 3-4 days left.  This made me nervous, like knowing you have just enough fuel to get to the next gas station.

I decided I’d reprovision a couple days early at the local Wally World, then return to Shea Rd in a somewhat different area to check internet connection.  Win-Win. 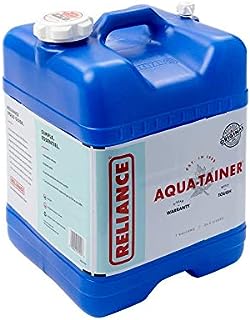 I reprovisioned food, picked up a 7gal aquatainer block. I’d used a couple of these stackable blocks for emergency water storage When I Lived In A House and really liked them.  I took one with me as my undersink graywater catchment.

This will make the freshwater supply sufficient to be water casual for a month without issue.  35gal + 7gal = 42gal.  I do have the collapsible 5gal cube I use to carry water but it has a small split on the top and leaks, so I don’t like to carry water in it.  When I do, I underfill it and leave it outside to fill the dog bowl, wash up, etc.

When I came back to Shea Rd I stopped in the main camping/staging area.  It’s pretty chaotic but I have functional internet again.

{Note:  I was going to tack on some linux geekiness but this is getting long}