I am presently in the Grand Junction, CO area and temps this week will be 100F+. Not fun in a house, and deeply unpleasant in a van. I had som e packages to pick up in GJ then wanted to escape to elevation ASAP. I wanted to get everything done in town early before the heat became dangerous.

There was also wildfire smoke blowing in again (from Moab?): 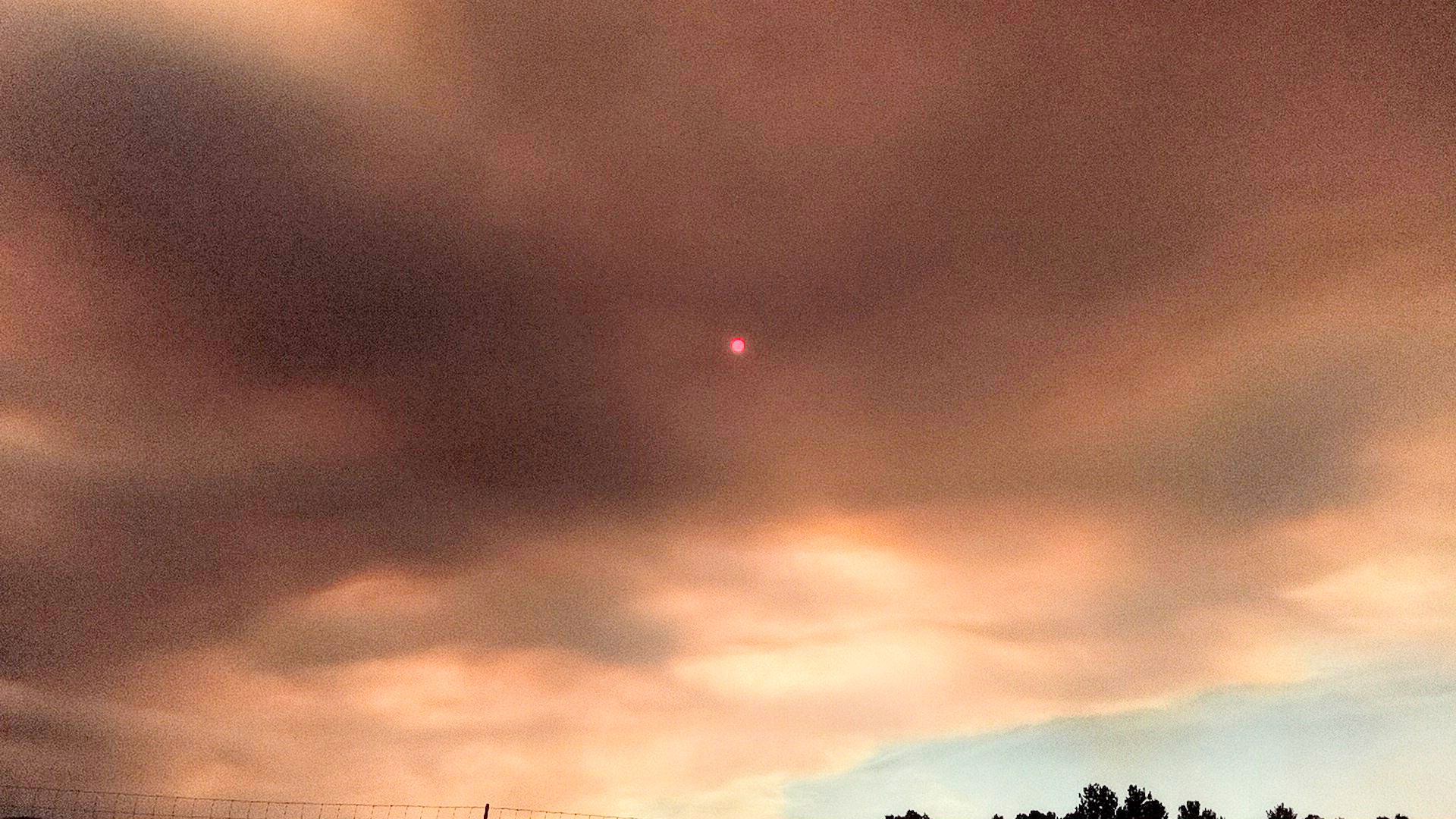 Red Pocket sent the SIM card to my remailer, and I had that remailed to General Delivery at a Grand Junction post office.

The second package was a package from Amazon being shipped to a “Counter”, which is a retailer that agrees to receive packages for customers. I prefer “Lockers” due to their relative ease and 24/7 access but that wasn’t an option.

This package was actually re-purchase of a package I bought earlier but then lost access to the delivery address (long story).

how it played out

Spoiler alert: it did not go well.

To be fair, I did catch a break with water. I needed to get fuel and my water spigot “spidey sense” was on Max Sensitivity. I found a gas station that had a spigot near the air dispenser. It was painted red (“non-potable”) but other than places like Utah (which has separate non-potable infrastructure) it all comes from the same place.

This was doubly fortunate because the only water kiosk I saw was priced at 40c-50c/gallon: 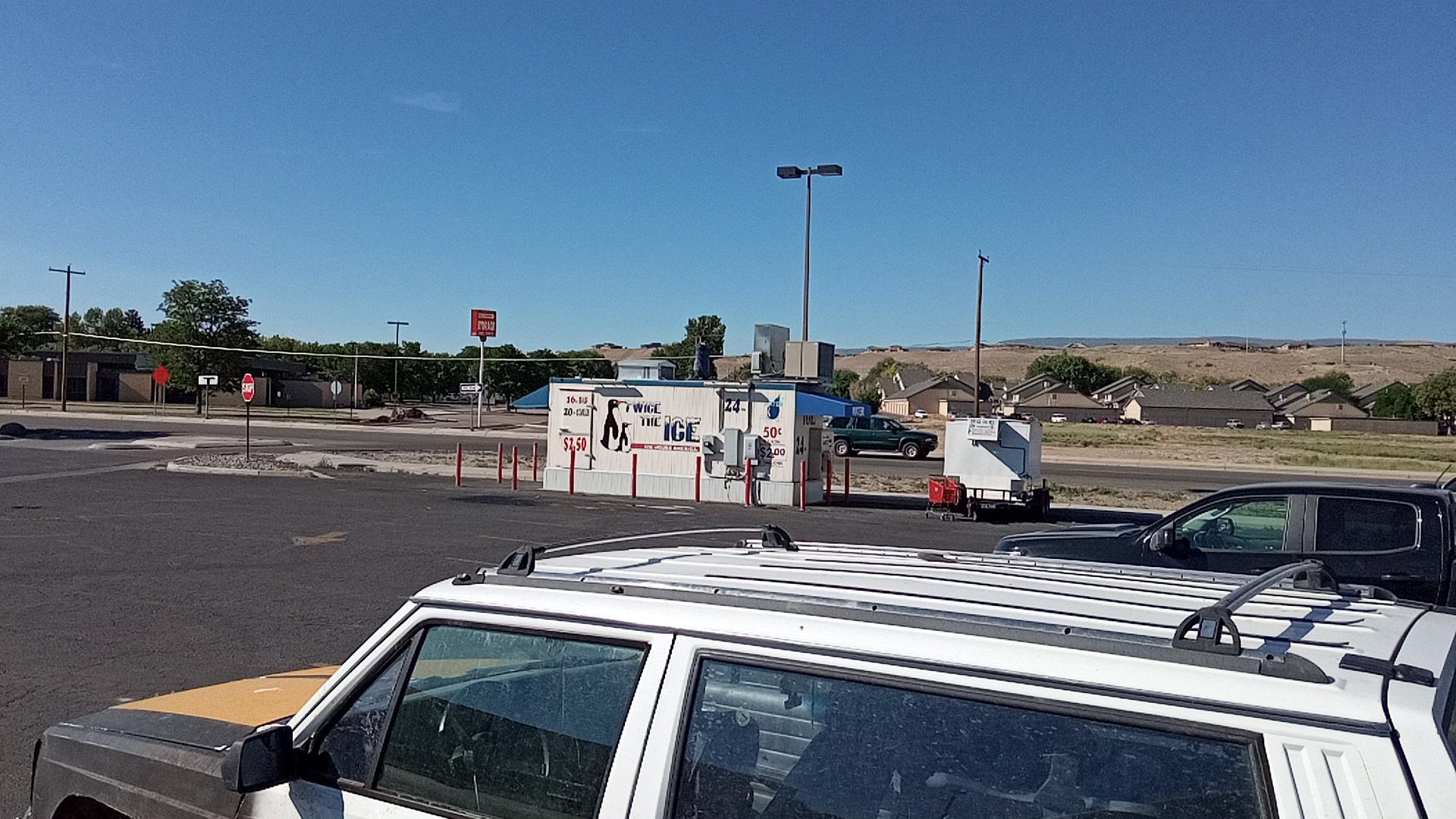 Parking in GJ isn’t fun, and was further enhanced by extensive lane closures for construction. It was one of those “I can see it but I can’t get there from here” things.

Once I got into the post office the pickup was pretty easy.

This was my first exposure to how few GJ residents are masked indoors. In many of the places I visited I was the only masked person in the establishment. Whatever.

You may remember that the RP SIM was originally sent to my residence address (where I do not receive mail). When I pointed this out they quickly reshipped the SIM to my remailer, but they sent the wrong SIM. The choice was between TMO and AT&T; I picked ATT because TMO is generally non-existent where I camp. They shipped TMO.

Again, whatever. The service is free-to-me so I forged ahead and popped in the SIM. Worked immediately in GJ then I got 0-bars (as expected) a few miles out of town.

My pantry was as stripped as it has been in many months. When I reprovisioned at walmart it cost $173 to get back on track. The wifi inside was very fast and I downloaded all my pent-up data (updates, podcasts, etc) while I shopped.

While waiting on the Amazon delivery to hit I took Muffin to a dog park that had a little pond in it. She loves wading and I figured it’d cool her down a little longer. She found a friend who loved to wade as much as she did: 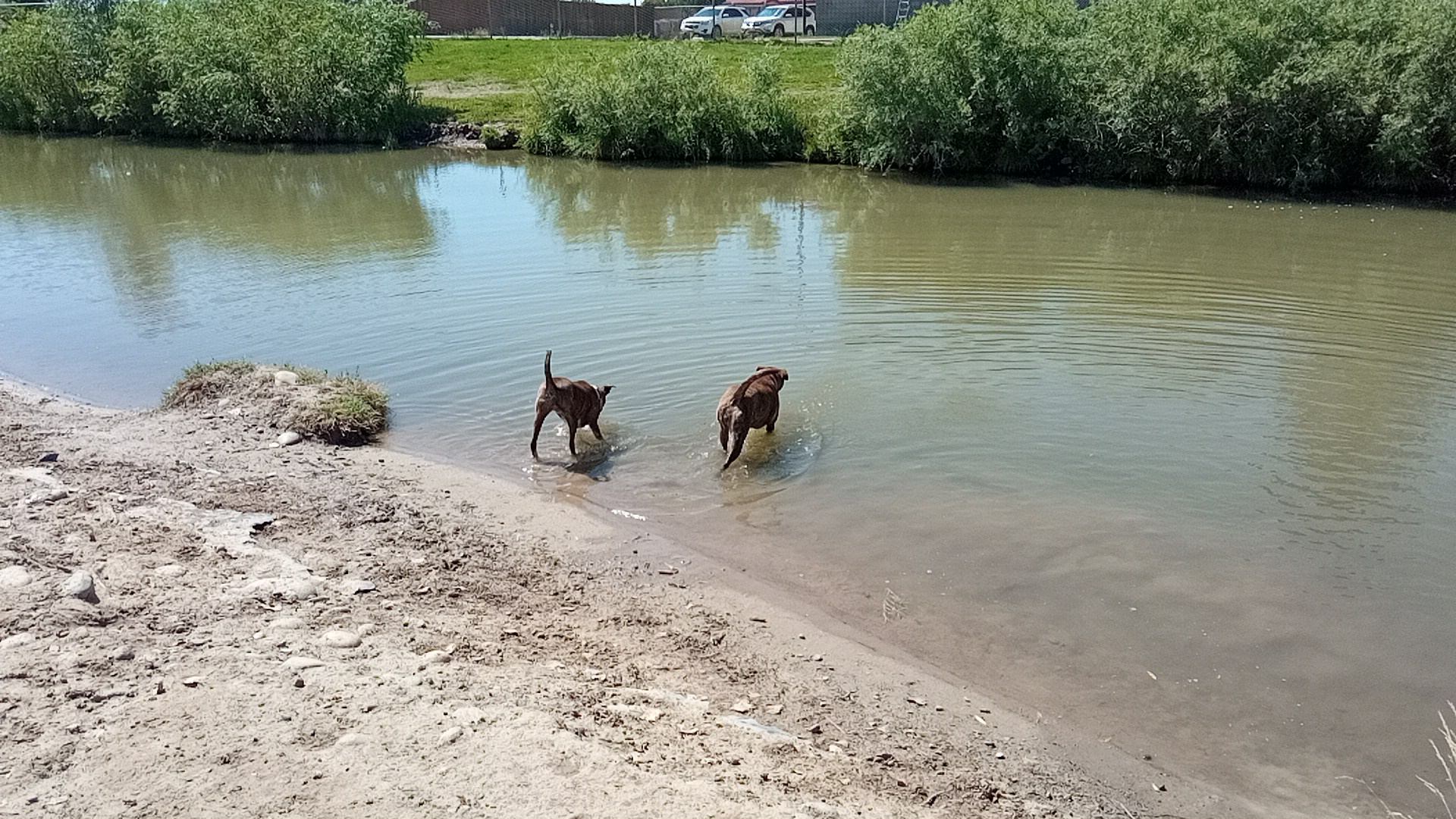 We stayed there long enough that temps crept into the mid-90s and I started to worry about waiting for the Amazon package. But, Ding! Notification from Amazon..

The notification was that the Hub had rejected the package and it was being returned to Amazon. Are you kidding me?

I cut my losses, loaded up the dogbeast and headed toward the “grand mesa”.

The road up is long and frequently steep. At around 8500’ I smelled something suspicious. It wasn’t “hot van” smell; it was a chemically smell I couldn’t place. Maybe one of my liquid fuel containers had vented some vapor due to the decrease in atmospheric pressure?

I pulled over to make sure nothing was leaking, and continued on. Read further to see what the smell actually was.

As I neared the top of the mesa I noticed a small waterfall coming over the side. Weird; where would water be coming from when there is no highter ground nearby? Turns out there are some ponds/reservoirs up there and a couple springs.

As far as I can tell there are precisely two camping spots within a few miles of where the road tops the mesa. I drove for a couple hours, going down little trails, attempting to find something.

It was getting later in the day so I went down a rough trail I’d seen before and passed on. The rocks in the path are so big the only other vehiccle I’d seen on the road was a Unimog (literally). I worked my way down it slowly and came to a bend that appeared to be a steep downhill with large rocks. I turned around and found what appeared to be a previously-used spot nearby, with 1 bar of 3g signal. I’ll take it.

My “far enough” sense paid off; dog and I walked down the trail after encamping and it was steep with big drop-offs. A UTV might negotiate it but it’d be dangerous for a passenger vehicle.

The spot is on the edge of a flat field but drops off into deep conifer forest. If I were a bear I’d absolutely live down there.

There is nothing to recommend the spot except the elevation; it was 81F up here yesterday instead of 104F as it was in GJ an hour away. This is my first time camping at 10,000ft. I was headachy by the time I stopped, and dehydrated. Didn’t get any better until I onboarded about a gallon of water and slept overnight.

Bugs are thick, I assume because of the ponds about a mile away.

destruction of the solar charge controller

It turns out that the smell was a smoked charge controller. Factors:

I knew I was pushing it, but the controller had been handling it fine. The extra insolation (sun power) at high elevation pushed it over the edge. I suspect it would have survived if I left the panels paralleled as they were with the 570w array. 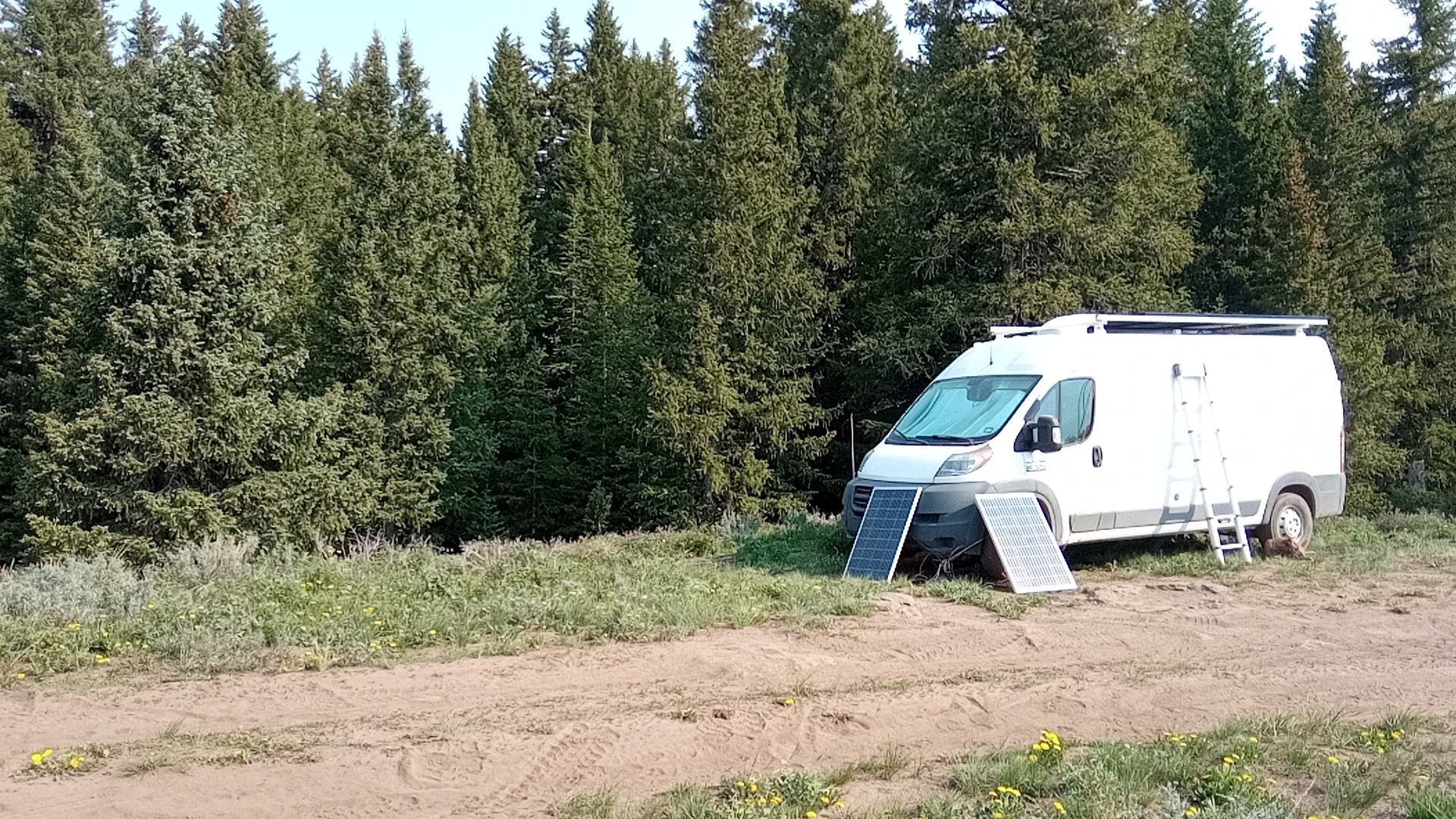 I set out the portables while diagnosing the main solar setup. They are set cockeyed to capture power in the morning and evening without repositioning. They are in parallel so the panel making power isn’t pulled down by the one facing away. These are feeding the 10A MPPT controller.

I rewired the roof-mounted panels into parallel and plugged them into a spare 20A PWM controller.

There is a misconception that higher-voltage can’t be used with PWM on 12v banks. PWM just runs the panels at Vbatt, leaving a bunch of the panel’s rated power on the table.

I decided on an Epever 50 controller (5415AN), one of their newer “high current” models. I ordered it off ebay (a bit cheaper) and asked the seller to mail it to the USPS in Grand Junction where I picked up the other general delivery package. Should get there about the time I come down off the Mesa.

I’ll leave the panels in parallel on the new controller. They have a 200V model but in my use there is limited benefit to running a 90.9v Vmp string (series) over 30.3v (parallel). Higher voltage would probably be more resilient to partial shade, but I don’t park in shade often and have portables now in case I need to do that.

I did consider other options: