This view is what I see past the laptop.  The red circle is at a spot that had been tempting me (click for full pic):

That spot called me because (from the camping spot at least) it appeared to be as far up the rock face as you could get on foot.  So Sunday the 5th Muffin and I decided to make the approach.  I loaded the camelbak-style day pack with water, some granola bars, a charged phone, her folding silicone water cup (like this one except plain red and $2 in the camping section).  Some basics stay in there all the time:  pocket knife, small flashlight, etc.

About a mile off the dirt road I let Muffin off-leash.  I didn’t want anyone/anything around as we’ve only been together since December and I don’t know how she reacts to everything.

When I take off here leash she stands there and I tap her on the rear while saying “OK!”  She starts running like a possessed creature for about 100ft, stops and looks back. I’m there?  Good, run more.  Stop, check, run.  If I change directions she makes a high speed flyby past me in the new direction and starts the process again.

We got up there in maybe 3 hours.  I was fatigued as it’s a consistent uphill jag and most was loose sandy material over rock.  She was breathing harder, too, and not running so fast any more.  I lost the rubber cane tip off the bottom of my MPS (multipurpose stick:  broom handle / camera mount / walking staff / laundry plunger).

Once we got thereit turned out the area of my desire, centered in this pic, is inaccessible.  It’s over a crevasse and the actual high spot is further to the right:

Oh well.  The things you can’t tell until you get on location.

Looking back you can see the camp a few miles back.  The red circle is where the van is parked:

While we were at the high spot for a while I noticed Muffin’s behavior start to change a bit but I didn’t realize what was happening.  She was making wider circles around me while I rested against a large rock, but was no longer looking at me.

In retrospect, I should have put her back on leash at that point.   But I was tired and starting to think about picking our way back down.

We started down.  Within 15mins Muffin was running much further away and wouldn’t look at me when I called her.  I knew it wasn’t good.

She went into a large cravasse on my left and I wouldn’t see her again for over an hour.  Too many outcroppings and other places for a dog to get behind.  I stayed in place for a while to see if she’d pop back up again;  nope.  So I walked down where she’d been seen last;  nope.

I finally saw here about 1000’ lower and toward the campsite.  There was no direct path and by the time I got there twenty minutes later she was gone.  Spotted her again high and to my right;  she laid down panting on a big rock.  By the time I got there (within 20’ of her) she stood up and actively walked away from me and into another large cravasse.    Couldn’t see her at all.

calling off the search

The sun was going down, I had a dog walking away from me and not listening at all, and enough water to get back to camp which was miles away over terrain I’d only walked once.    I had no binos, and wasn’t even wearing my glasses.  I was tired and stressed.

I decided to return to camp.   It seemed wisest to walk back by dark and try to find her in the morning.  I figured I’d leave the van interior lit up and door cracked in case she could see it down the mountain.

Every few minutes I’d turn around and stand still to see if I could catch her movement:  nothing.

I considered the odds of her surviving a few days vs getting eaten by the local predators, or dehydrating from exertion.   Not-fun kind of thoughts.

I got down to the flatter area about 3/4 mile outside camp, still turning the possibilities over in my head.  I heard an explosion of patter and Muffin came blasting past and fell over in front of me, heaving for air.    I held onto her caller until I could get the lead on her. She finaly stood up again when I poured about a bit of water for her in the silicone cup.  Didn’t want to give her too much to drink because of her exhaustion and the remaining walk to the camp.  She is a deep-chested, tuck-waisted dog (from the Boxer half) and that morphology is prone to “bloat” (intestinal torsion) when full and active.

I played it low-key;  didn’t want to overreact and teach the wrong lesson.  We walked back to the camp like normal, where she drank about a half-gallon of water over the next hour.  She slept hard that night and much of the next day.

Clearly there is work to do if I want to give her off-leash time. 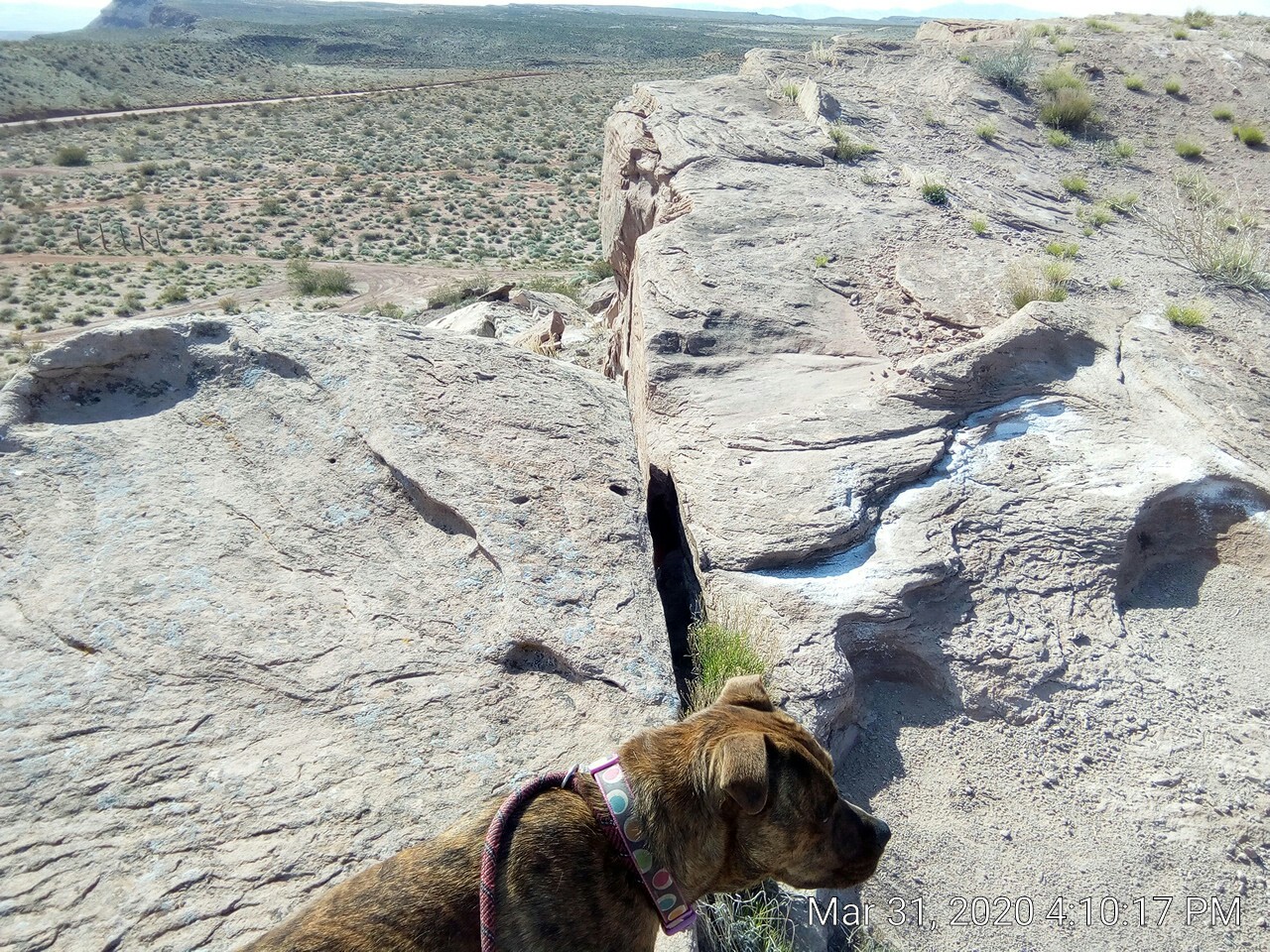 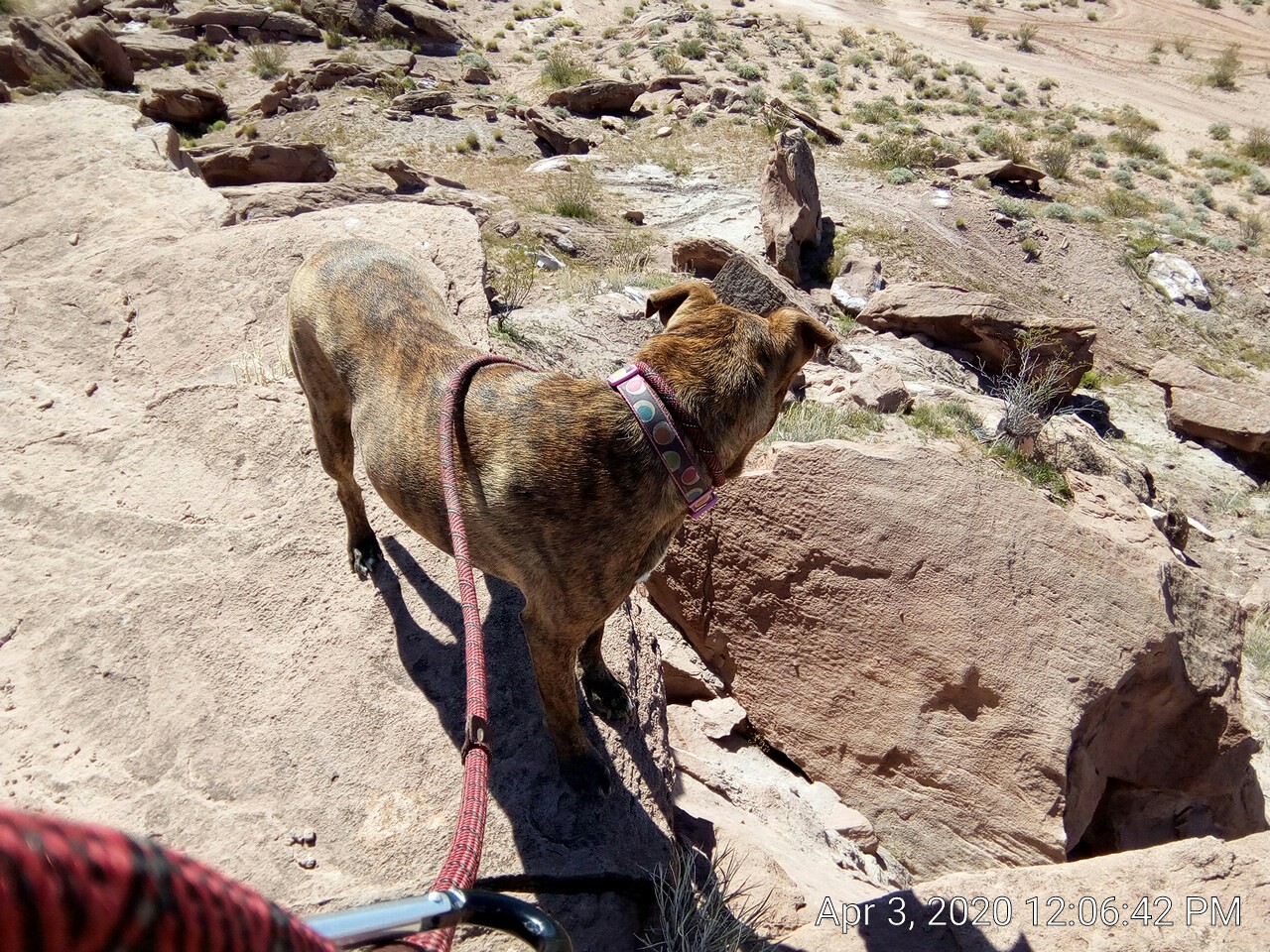 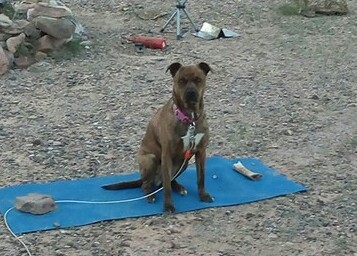