This stately creature is Canada, a mixed breed of some kind.  Back end looks like a GSD and the front end looks like a terrier or hound.  He was marked “contagious “ so I didn’t take him out.  :-(  Those eyes! 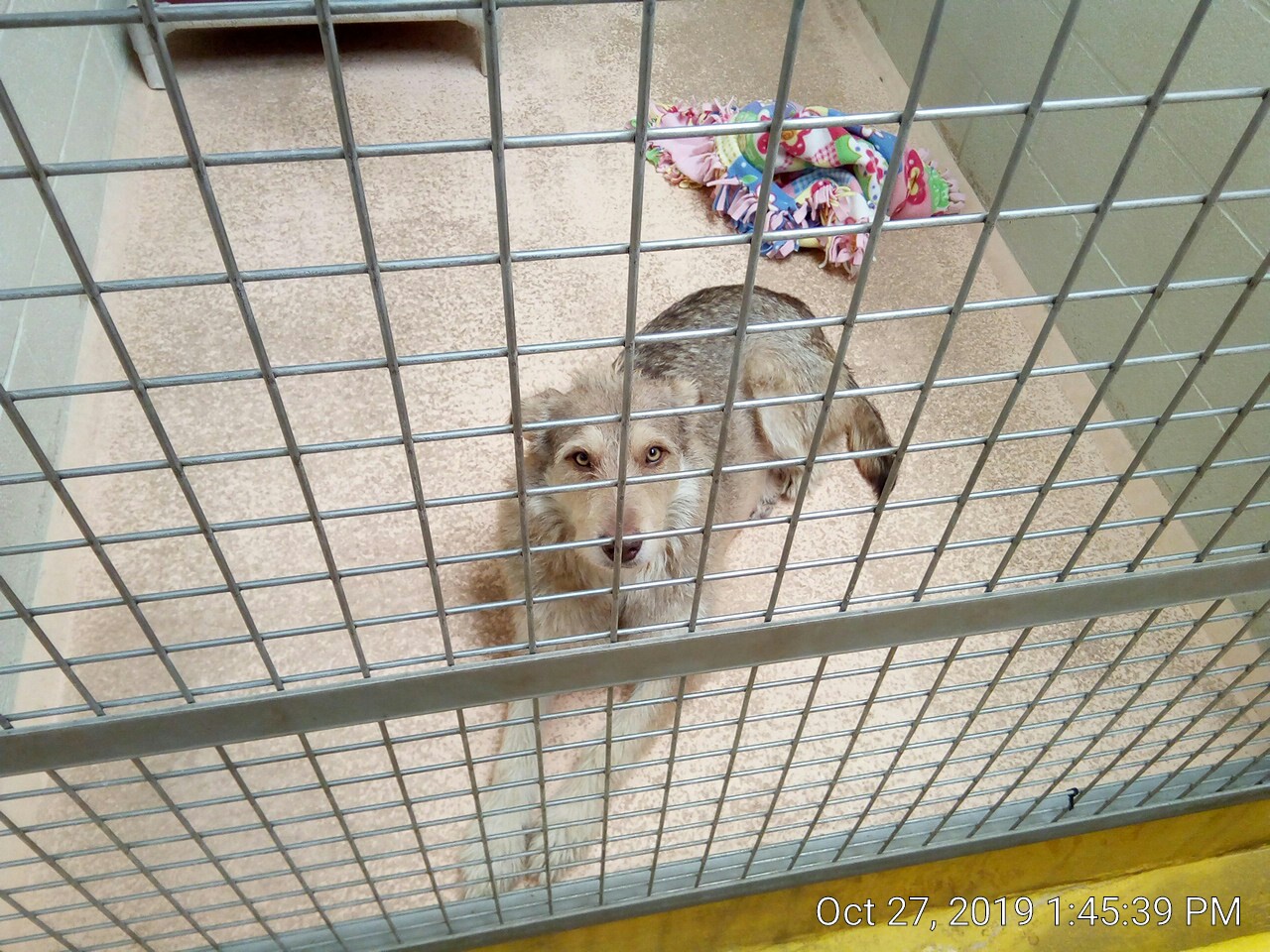 This Dobie was about 30# overweight.  Her energy level was high and she was sprightly so I think she was confined and could not exercise.  She has a lot of heavy callouses that suggests she was sleeping on a hard surface.   The ear crop looks like a DIY job that went lopsided.  Intact dobie ears are so pretty and soft I don’t know how people can bear to cut them.  At least she has her tail. 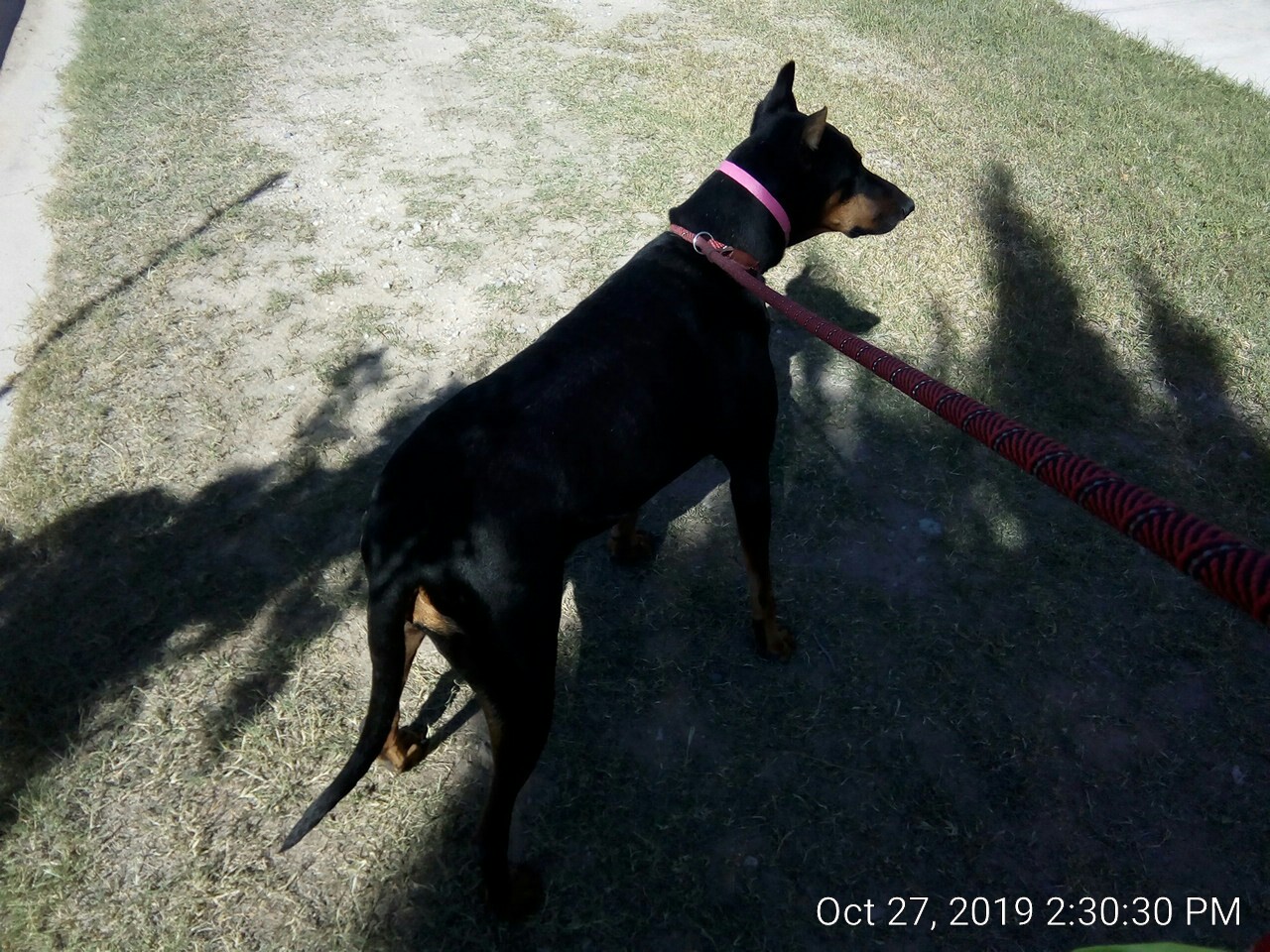 Didn’t spend much time visiting with Dagger, this black GSD mix, since he really had to go to the bathroom.  I saw this expression and knew what it meant…  We had a good walk.   He’s bright and attentive like most GSD. 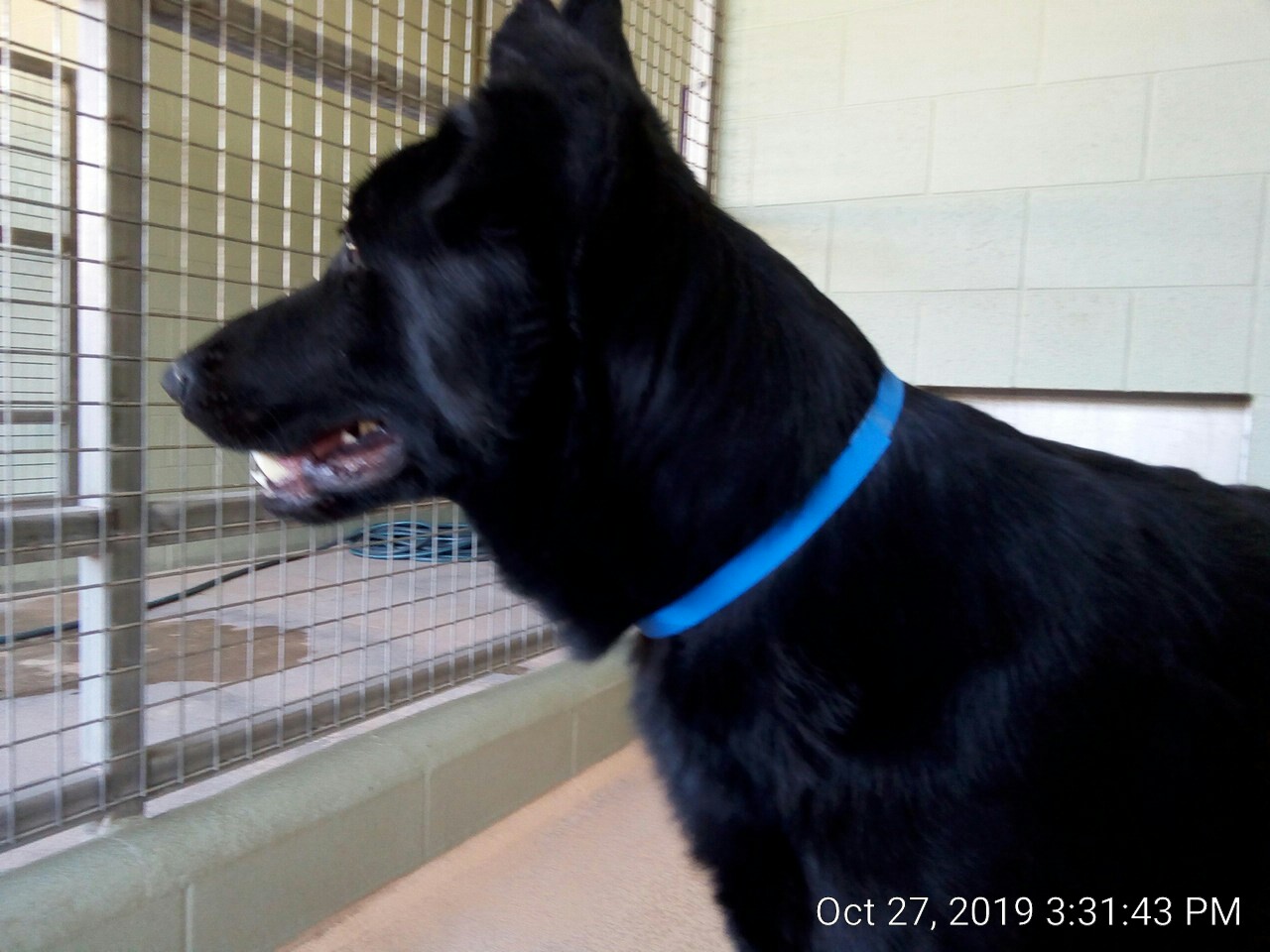 This lovely, giant Dane was the most skittish dog I’ve ever been near.  She crept up to me but reacted to every touch with a full-on jerk.  Even when touching, lifting, and touching again.  After several minutes she reacted less and less.  I varied pressure and graduated to some itsy-bitsy-spider touches.  We went for a walk and she did great;  strolled alongside, no pulling or weaving.  She’s ready for a patient and low-stress home.  :-) 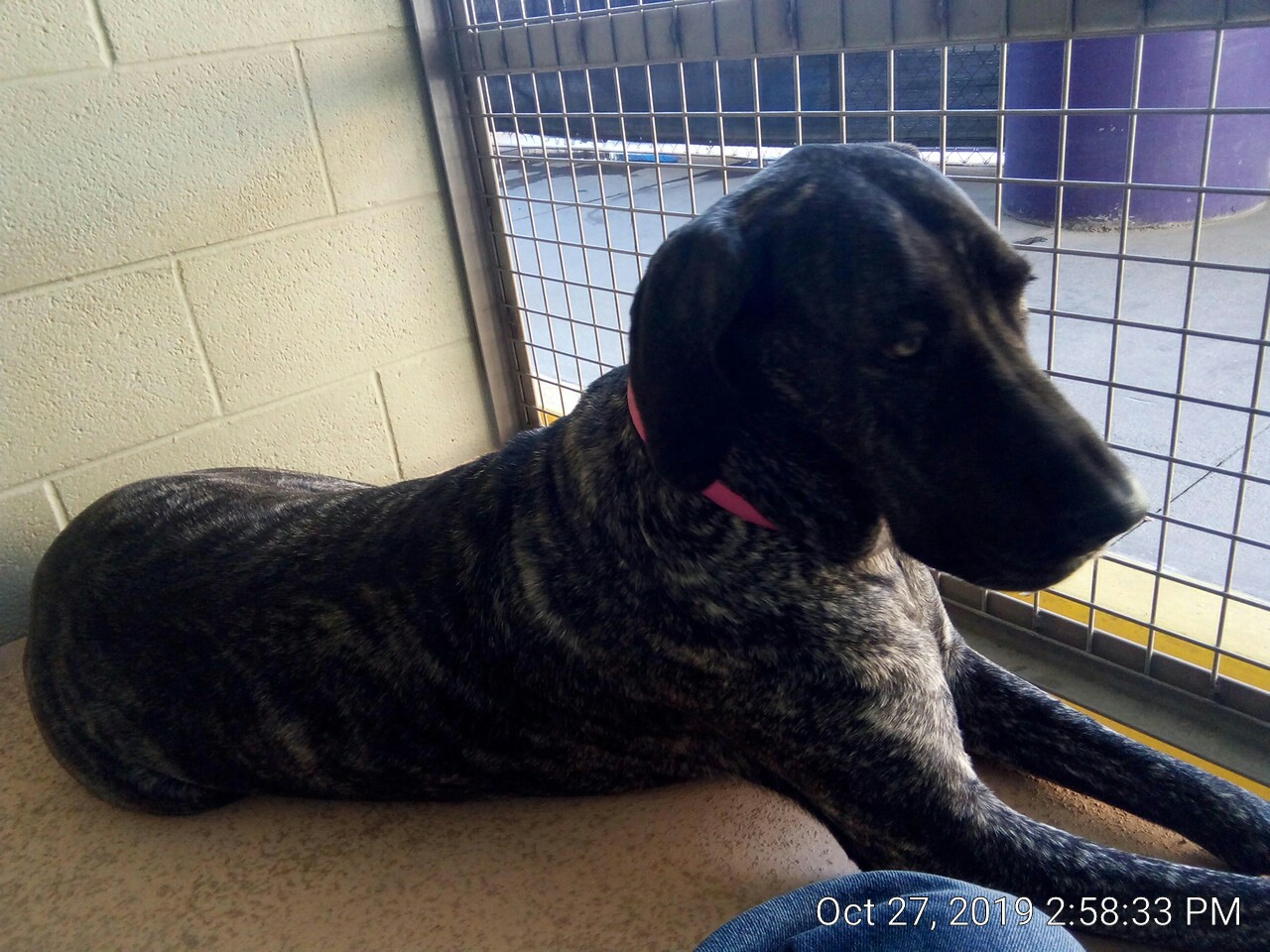 Jack, a Rottweiler mix, had been tormenting me all day.  Every time I (or a potential adopter) would walk by he’d go nuts as if he were a Bad Dog

Just before I left I had enough and the two of us were going to figure it out.  I came to the kennel door and he went wild as expected.  I didn’t react.  Pushed the door a bit more and his demeanor shifted.  Opened almost enough to get in and he backed up / sat down.  Interesting.

I squeezed in and shut the door behind me and he was totally happy to have a visitor.  We sat together until the excitement eased a bit (wiggling, Operation Facelick).  We went for a walk and he acted fine.  I noticed he was quite thin, which I hadn’t seen when he was acting up – too many other factors to juggle. 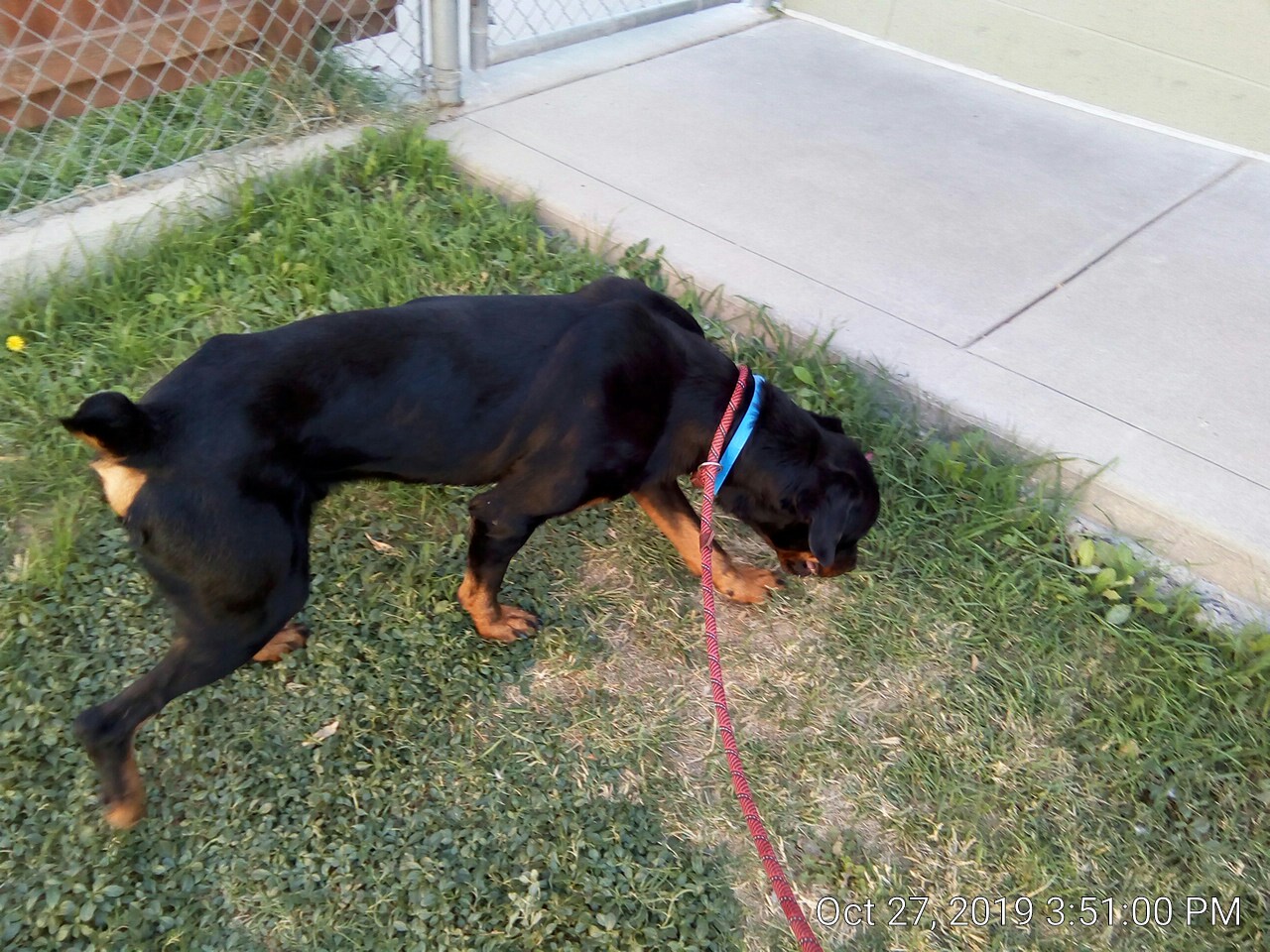 I put him back up, washed up, and got ready to leave.  When I walked out past his kennel he spazzed out again and didn’t seem to recognize me from 3 minutes before.  Boundary aggression maybe but I think he’s just wound up from being caged.  I don’t think he’d be crazy like that in an adoptive home.

Oh, while I was in the large dog kennels, a nice pitbull named Max was adopted.  :-)  He was kind and always happy to see people.

I decided I had to make a pass through the small/medium kennels.  I was really whipped and my back was hurting so I spent about 10mins with Pumpkin sitting in my lap.

She was quite small, maybe 15 lbs.  Nice animal, I think she was terrorized by being across the aisle from a very barky bull terrier (bud light breed with the egg-shaped heads).

I hope she finds a home soon and can get away from the noise.