I did some maintenance yesterday at a local park. 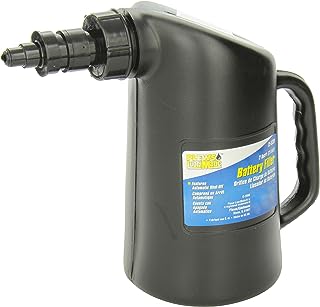 My house batteries are fine getting watered 1x/month.  It’s super easy with one of those battery filler thingies.  I love mine.

The filler doesn’t spill or drip, and automagically shuts off when the cell is has enough.  It makes a “bloop bloop bloop” sound I use to judge whether the cells are using water evenly.  These two things make it possible to fill the battery blind, where you can’t see into the cells themselves.   Useful in van builds where battery banks are often hidden away.

When I was wiring in the battery doctor voltage-sensing isolator  in May 2017 I noticed the under-the-floorboard starter battery seemed to have removable cell caps.  Maybe.  Possibly.  I made a mental to look at it someday.

Since I had the waterer out and it was a nice day I decided to check on those promising cell caps.  Two of the six were accessible without disassembling a byzantine arrangement of hold-downs, power distribution blocks, and cleverly hidden fasteners.

I filled the two accessible cells;  the plates were still covered well by electrolyte.  These cells needed about a dozen bloops each.  That’s about what my house bank cells need when I refill them every 1.5months.

It would be interesting to know if the majority of outgassing occurred during Step 2.

Per the ECU’s oil timer the van told me it was time to swap out the motor oil.  I use the appropriate-spec oil in synthetic formulation.  It’s not that much more expensive if you catch it on sale at walmart or amazon.

At each change I have pulled a sample for oil analysis. Partly because I’m a geek, partly because the van is my home and I’d like to know how it’s doing, and also this is the first vehicle I’ve owned that still was under warranty.  The coverage is up late 2019 so if anything goes sideways I want to catch it in time for warranty repair.  So far (four changes) all the samples have yielded good news.

upside down in this pic[/caption]

Oil changes can be messy, and pulling a sample even moreso.  Luckily before the first oil change I bought a Fumoto oil drain valve and installed it when changing that first time.

The valve has a nipple to put a 3/8th” hose on (at least on mine).  So I slip a few inches of hose on there and place the other end in the oil catchment container.  Zero drips, zero spillage. On/Off control for pulling samples, bleeding off excess, or changing catchment.   I’ll never go back to dropping a filler bolt into a pan of used oil.