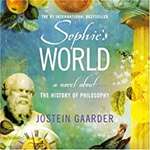 Note: this is part of a series of posts about Sophie’s World: A Novel About the History of Philosophy. I’m reading it in tandem with Amateur on the Loose as a kind of virtual book club experiment.

Way to start out with the easy questions!

This isn’t a question of legal identity (although that is interesting, cf. Return of Martin Guerre). Sophie’s legal ID is known to the correspondent, as the letter was addressed to and delivered to her.

What if she had been given a different name? Anne Knutsen, for instance. Would she then have been someone else?

She received no response to this either, but felt a momentary confusion as to whether it was she or her reflection who had asked the question.

… [a cat] was here in the garden too, but hardly aware of it in the same way as Sophie.

The cat lacks…. what?

Sentience? Consciousness? Sapience? I think qualia is closest (subjective awareness of experience) but the word itself is unfortunate.

Is zen meditation and the like an attempt to shed self-awareness and return to [cat-experience](http://www.philosopher.eu/others-writings/nagel-what-is-it-like-to-be-a-bat/](cat-experience)?

As Sophie started to think about being alive, she began to realize that she would not be alive forever. I am in the world now, she thought, but one day I shall be gone.

The cat is definitely not aware of its own mortality. It does want to survive, but I don’t think that’s the same thing.

As soon as she concentrated on being alive now, the thought of dying also came into her mind. The same thing happened the other way around: only by conjuring up an intense feeling of one day being dead could she appreciate how terribly good it was to be alive.

I suspect the author (Gaarder, not the letter’s author) was thinking of Nietzsche here: “The certain prospect of death could sweeten every life with a precious and fragrant drop of levity; and now you strange apothecary souls have turned it into an ill-tasting drop of poison that makes the whole of life repulsive.”

… wasn’t it unreasonable that she hadn’t been allowed to have any say in what she would look like? Her looks had just been dumped on her. She could choose her own friends, but she certainly hadn’t chosen herself. She had not even chosen to be a human being. …She felt like a doll that had suddenly been brought to life by the wave of a magic wand.

The larger issue, IMO, is the Cheshire cat issue - our physical specifics are a subset of our more general instantiation - we exist. While we might have some control over our continued existence after achieving sapience, we certainly had no choice about being born.

I am thinking of Heidegger’s concept of thrownness (being thrown in the world) specfically and existential thought in general.

What was a human being?

Maybe the more useful category is persons rather than humans. We seem to have a minimum age for personhood (annual majority), and can revoke it (death penalty, removal of life support, etc).

“I think I’ll go upstairs and do my biology homework,” she said, almost apologetically. Once she was out in the hall, she thought, No, I’d rather go out in the garden.

This reminds me of the various “multiple intelligences” or even “distributed brains” theories. We are a bundle of conflicting thoughts, feelings, and instincts that sees itself as unitary. Cf. A Thousand Brains: A New Theory of Intelligence and the idea that our brains are a bunch of different circuits that are polled to develop apparent consensus.

Also, shades of the marshmallow test.