These were done back-to-back, allowing the oven to cool (and biscuits to be eaten) in between.

I wanted to use a commodity biscuit rather than DIY to reduce variables.  I wanted plain cheap biscuits but Walmart is out, so I got their Great Value Jumbo biscuits. The instructions say:

Two would fit in the medium cooking bowl, if one of them were cut in half: 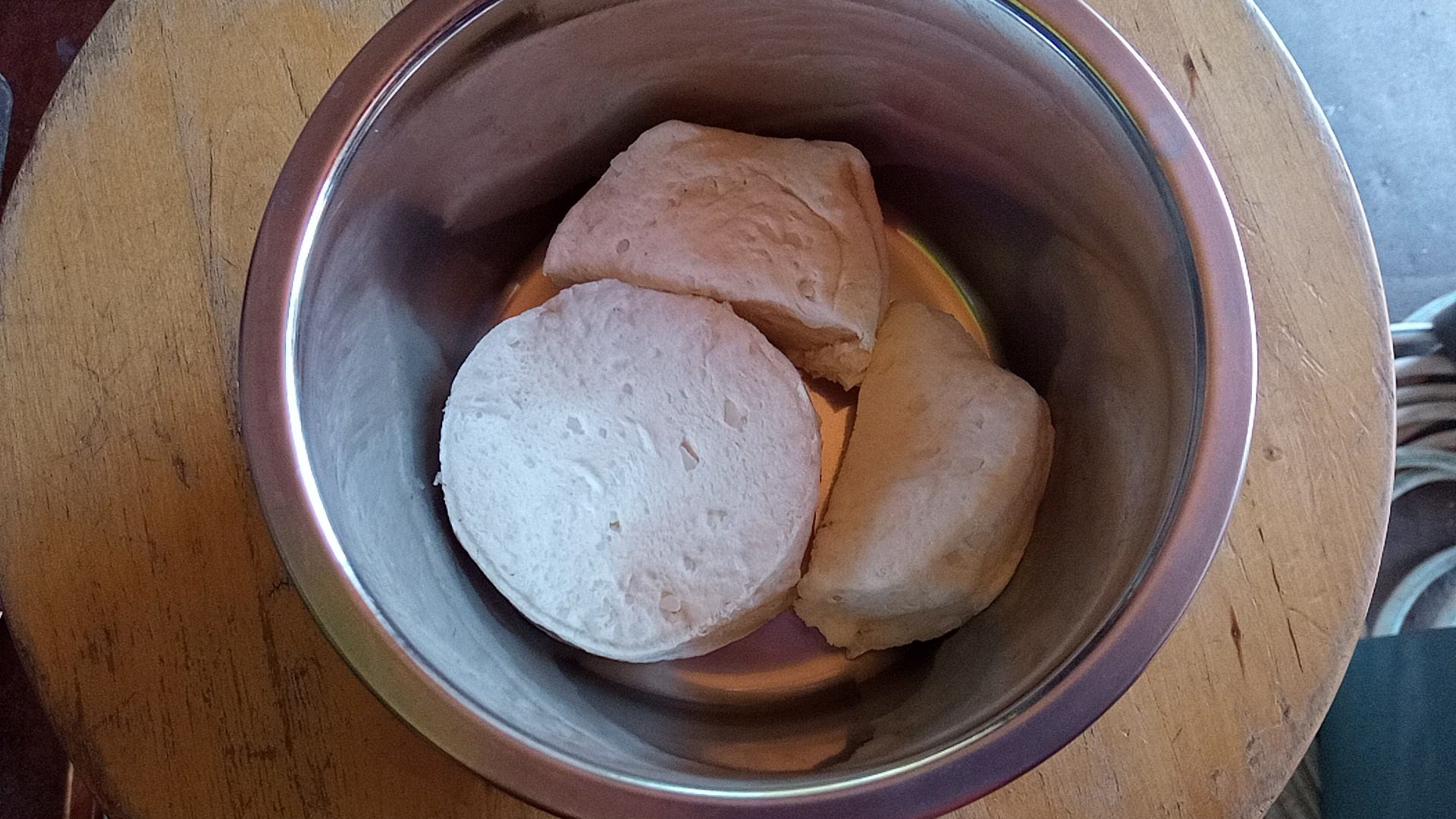 I set the oven on the Dragonfly: 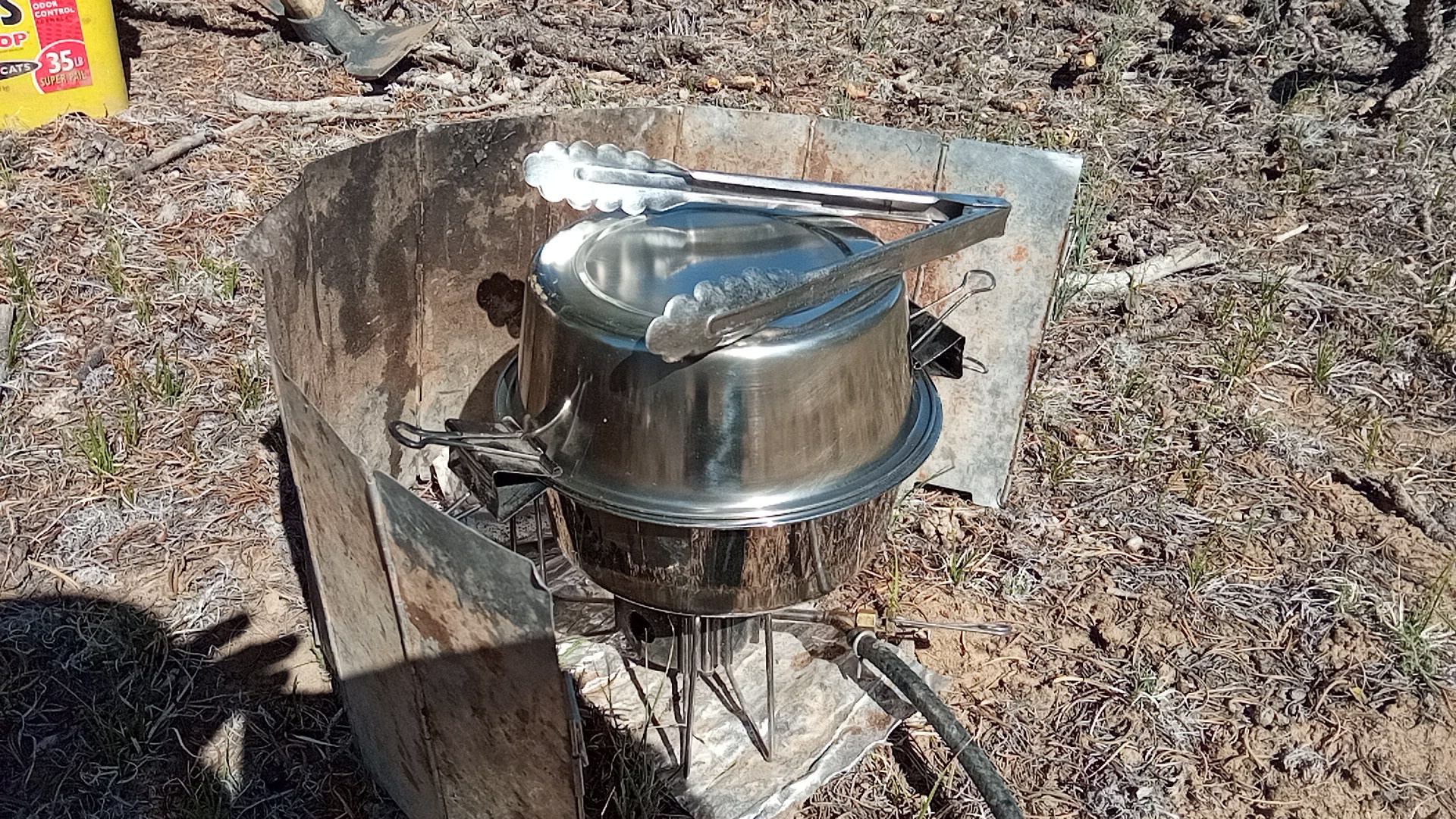 The dragonfly has a “roarer” burner, which directs a flame blast into the backside of a spreader with 3 holes.  This diffuses the flame blast to a large degree, but it’s not a big even flame circle as one finds on coleman stoves or gas burners. Behold the majesty:

Usually not an issue with normal cookware but these dogbowls are very thin.  Let’s see what happened….

I had no idea what to expect.

The biscuits were cooked through but burned on the bottom. Scraped off scorched layer dad-style, and ate them. 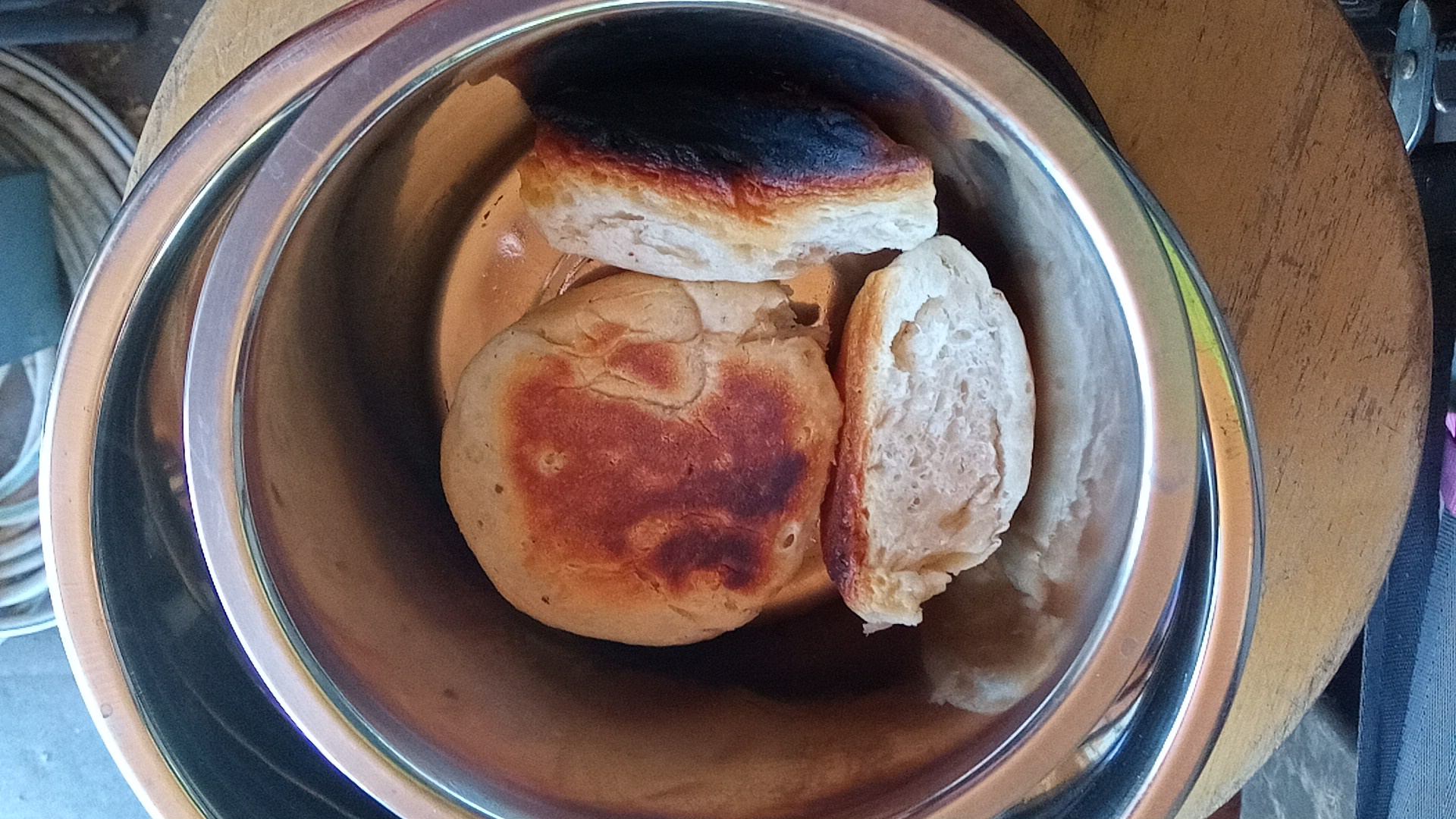 At this point I decided the next step would be to tame the heat, either turn it down or distribute more evenly. I chose distribution and it ended in tears….

I looked around to see what I might have.  I decided the sandy dirty at the site might even/tame the heat a bit.  I put about 3/8” of dirt in the bottom pan and preheated: 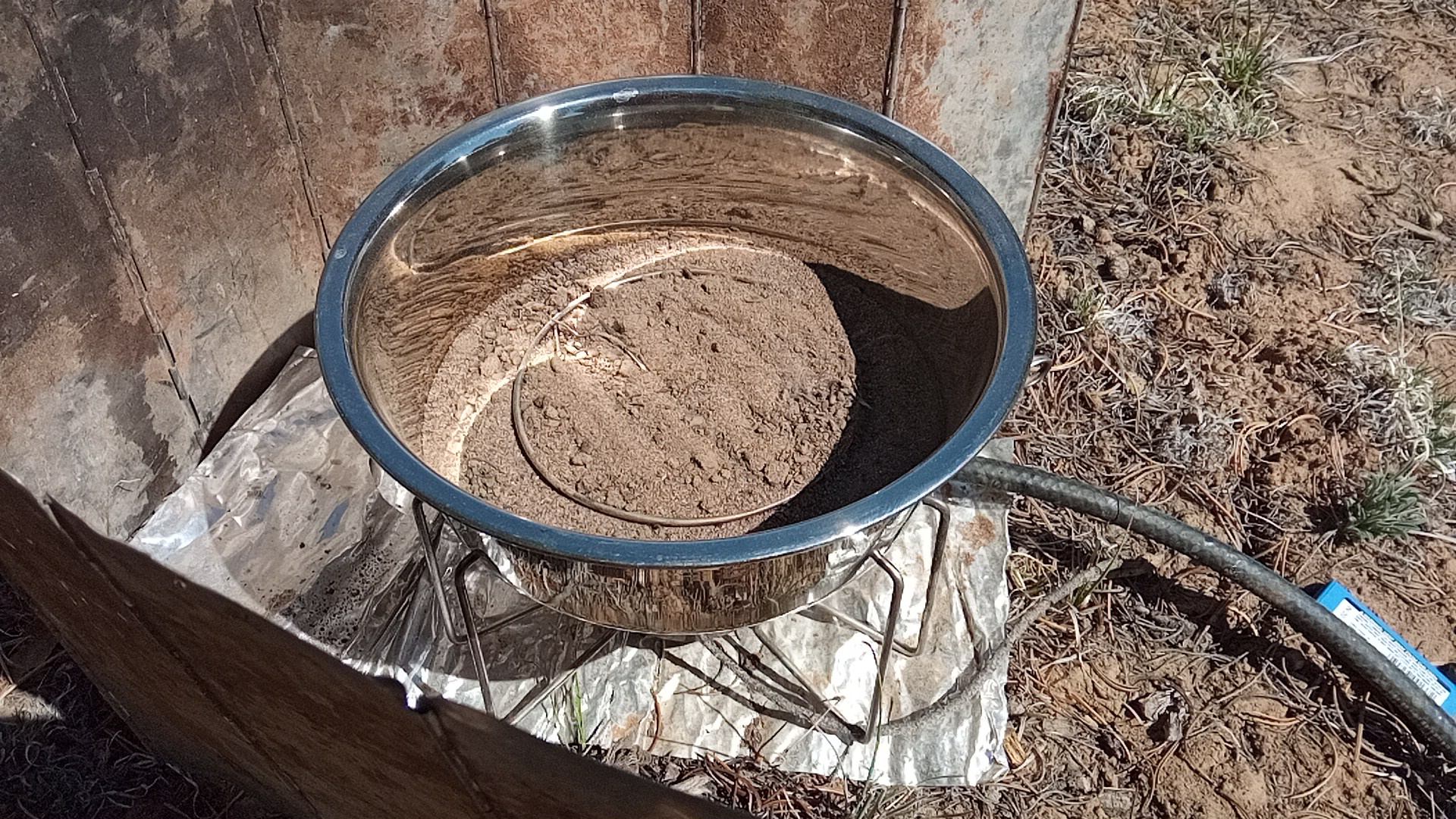 There must have been some cedar fragments because it subtly of incense for a couple minutes while it burned off.  After that I sealed it up and tried again on MEDIUM.  Set the timer for 15mins and they were seriously burned by 10 minutes.

What the heck?  <– not my actual words

I soon realized that the sandy dirt was in direct contact with the bottom pan and slamming in the heat.  Ugh.

The char was too deep to scrape so I just ate the tops.

I looked in the bag of site litter I’d picked up and found an old aluminum can.  I crushed it flat(-ish), stacked the little grate on top…. 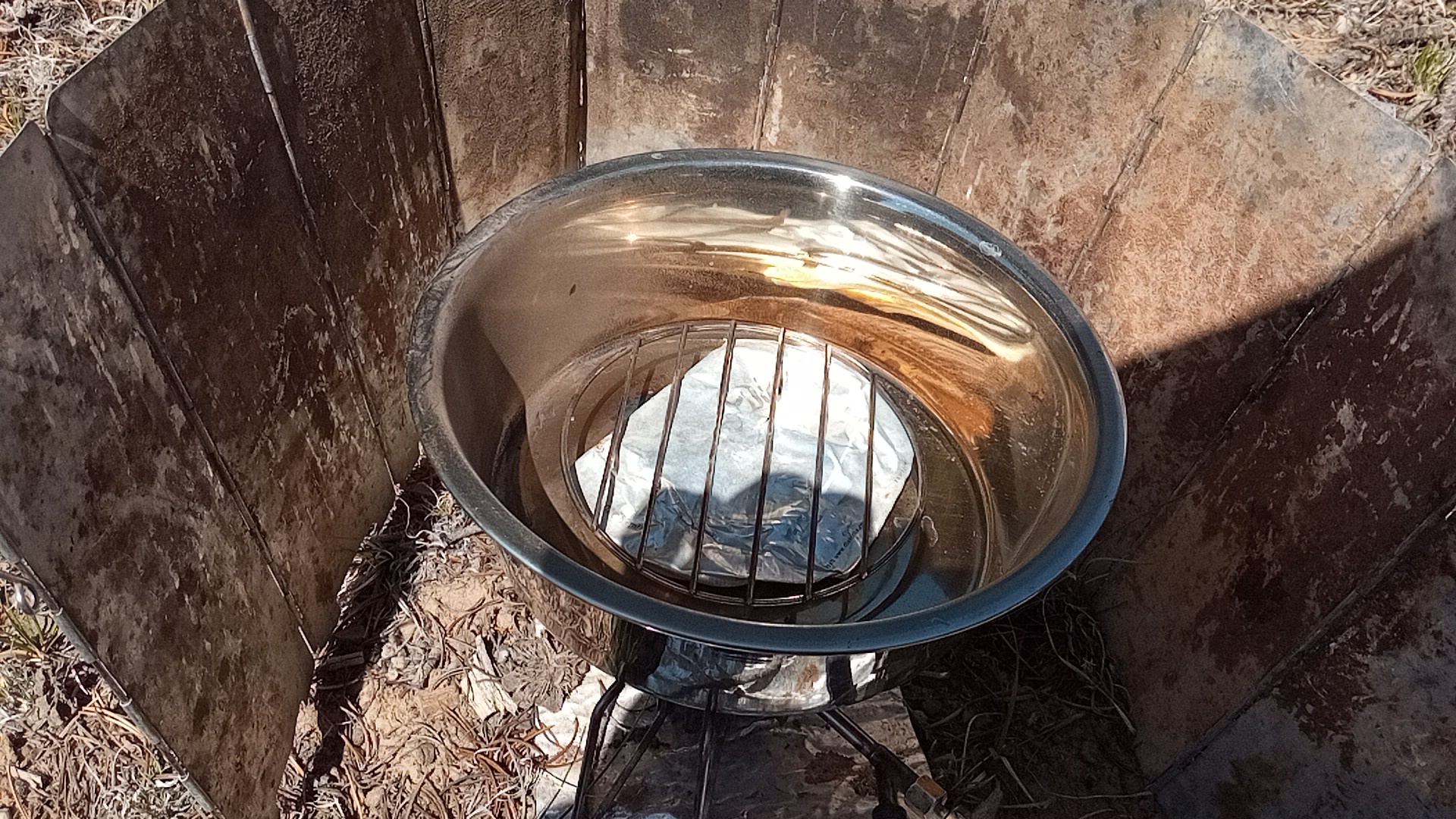 ….and tried again on medium-low.  At 15 minutes they were rising but not browned.  Still fine at 20mins. And at 25mins. Starting to think I should have used MEDIUM heat. Flipped them over and removed at 30mins. 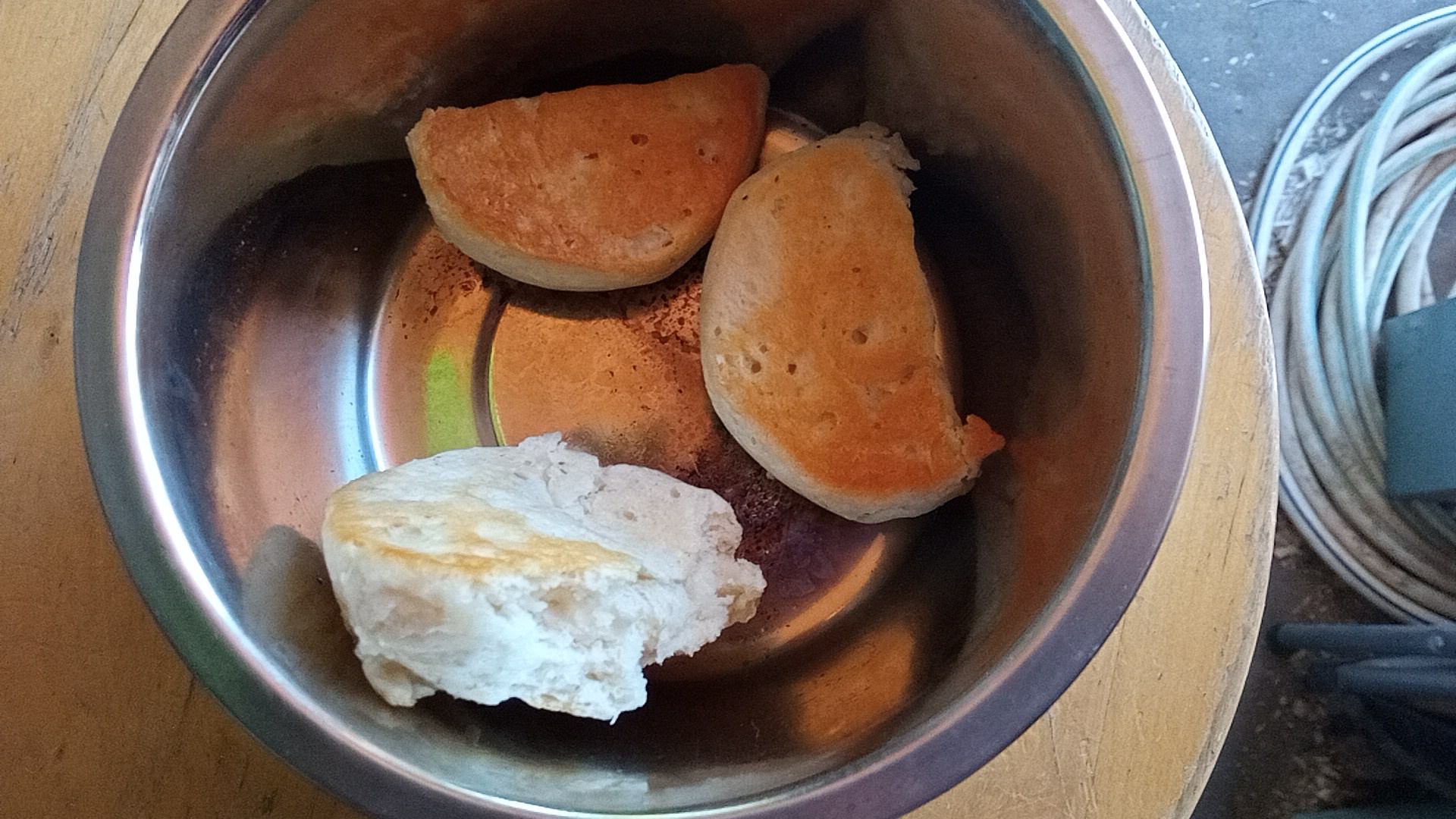 These didn’t rise as high and were just barely cooked through.  I ate them all because of my Dedication To  Science.

I think the bottom spacing is correct.  Let’s adjust the heat.

Last set of test biscuits from the can, so this is all for today.  On MEDIUM this time.

Cooked through, apprpriately risen,  and brown-to-lightly-scorched on bottom at 15mins, which is my preference.  Still pale on top so I flipped them for 5mins.

Thought I took a pic but on review I did not, and already ate them. :-(

I suspect slightly lower heat and 20mins would have gotten me into A- territory.  I think the BBQ temp probe is going to help me find the right temp.  Cooking indoors over propane without the wind and all would also likely be easier.