Lots of stuff going on with this one

I’d mentioned earlier that DC had sussed out the rec center shower scenario.

I checked my wallet and had only $3 cash. I needed to hit an ATM ahead of time in case the rec center only took cash. It turned out they take credit/debit so it was a non-issue, but I didn’t know that at the time.

Digression: I use an online-only bank (Ally) for checking/savings. They have no physical infrastructure of their own, so they get around that by charging no ATM fees and crediting back ATM fees charged by other entities. I think that’s clever.

The shower was quite nice. The head was fixed but had good pressure and spray pattern. Water had a temp control and a pushbutton to dispense the water. Sometimes those pushbutton things are egregiously-timed, but this one was generous. I timed it at 2 minutes. I will definitely check for rec center showers at other towns in the future.

I headed off to Speedy Wash Laundromat, the one in town that appeared to have wifi. It did, and I updated my devices and downloaded pent-up media. Washed our clothes, including the set I’d just take off before the shower. Muffin’s leash and collar went through in a lingerie bag.

We ran through at least 42 gallons of water (!) in the last 14d stay and that made me anxious. I don’t really want to carry another aquatainer but I think it’s the smart move. If I was going to pay flat-rate for water fill in town (which DC also found) I wanted to have the additional container on-hand and ready to fill.

I made the run to Wally World in Cortez since they typically carry the aquatainer in the camping/RV section.

Water refill was $3 for up to 50 gallons at Sundance RV Park in town and the tank + 2 aquatainers took 49 gallons. That’s ~6c/gallon, tied for cheapest with RV Pit Stop in Quartzsite.

{edited to add pic of water spigot, on left in this pic}

I had a package from the mail forwarder waiting in General Delivery at the post office, which I picked up with ease. As with some other GD deliveries, the tracking said “out for delivery” until I physically picked it up and it was scanned and marked “delivered”.

On my way out of town I stopped at the local thrift store and donated some bulky stuff:

I picked up couple metal forks at the thrift and a $2 75w-rated Crockette (Mod. 3200/2) in case DC wants crock action in her own noble chariot. This one pulls ~68w per the kill-a-watt meter, in contrast to the ~60w Kaylee observes on hers. This makes me wonder if the “/2” seen in the model number refers to a Version 2 with slightly higher power consumption.

At this point I was ready to head to the next campsite, but I saw a beer store across the street with a SCHLITZ sign on it. I popped in to see if they really had this rarity but they did not; it was an old sign. Schlitz has returned to their pre-Prohibition recipe and it is noteworthy for actual Beer Flavor in a macrobrew. I encourage you to try one if you can find it.

It was entirely overcast and intermittently-rainy all day. Luckily the newly-grounded isolator worked splendidly, blasting 500w+ into the bank this morning when it needed it most.

This was my first opportunity to check both types of replacement windshield wiper function at highway speeds in the rain. I saw/heard no difference, and so will use whatever is available and cheapest in the future.

The new site is ~500’ above the Dolores River outside Cahone, CO in an open grazing area. The gravel road in was decent in the rain and the last 100yd of graded dirt was a bit sloppy. Not enough to activate the traction control and it will dry out quickly over the next few days.

Here’s a pic when the rain stopped briefly: 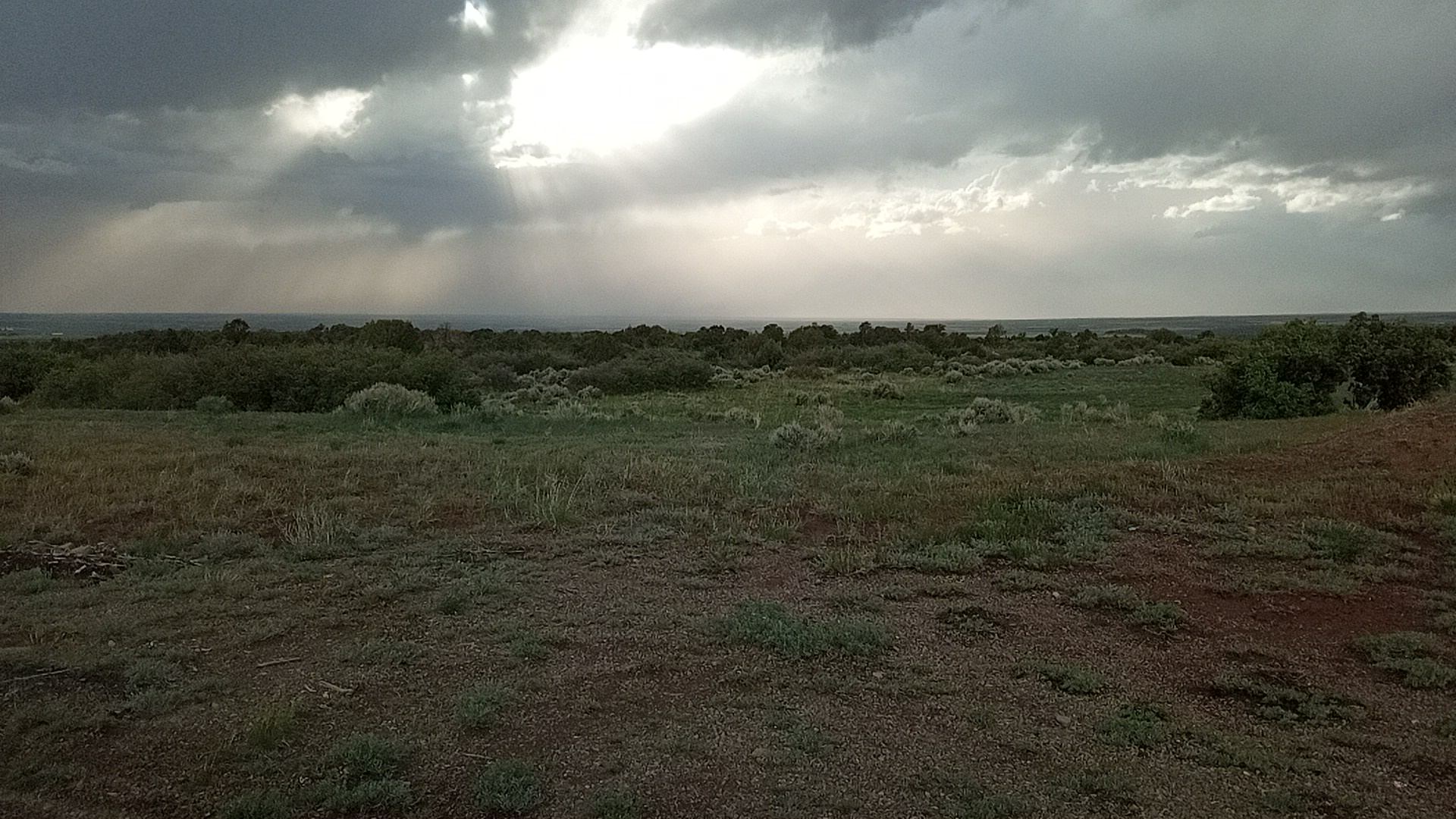 A short time later a cell came through with a vicious little sleet storm; it was insanely loud inside the van and the dogs were scared. Here is a radar image from that timeframe; you can guess where we were:

Today is forecast to be windy and dry. Tomorrow the sun will come out again.

The dogs looking over a cliff outside Cortez, CO. Sadie exercises admirable caution and daredevil Muffin, as always, wants to stand on the edge: 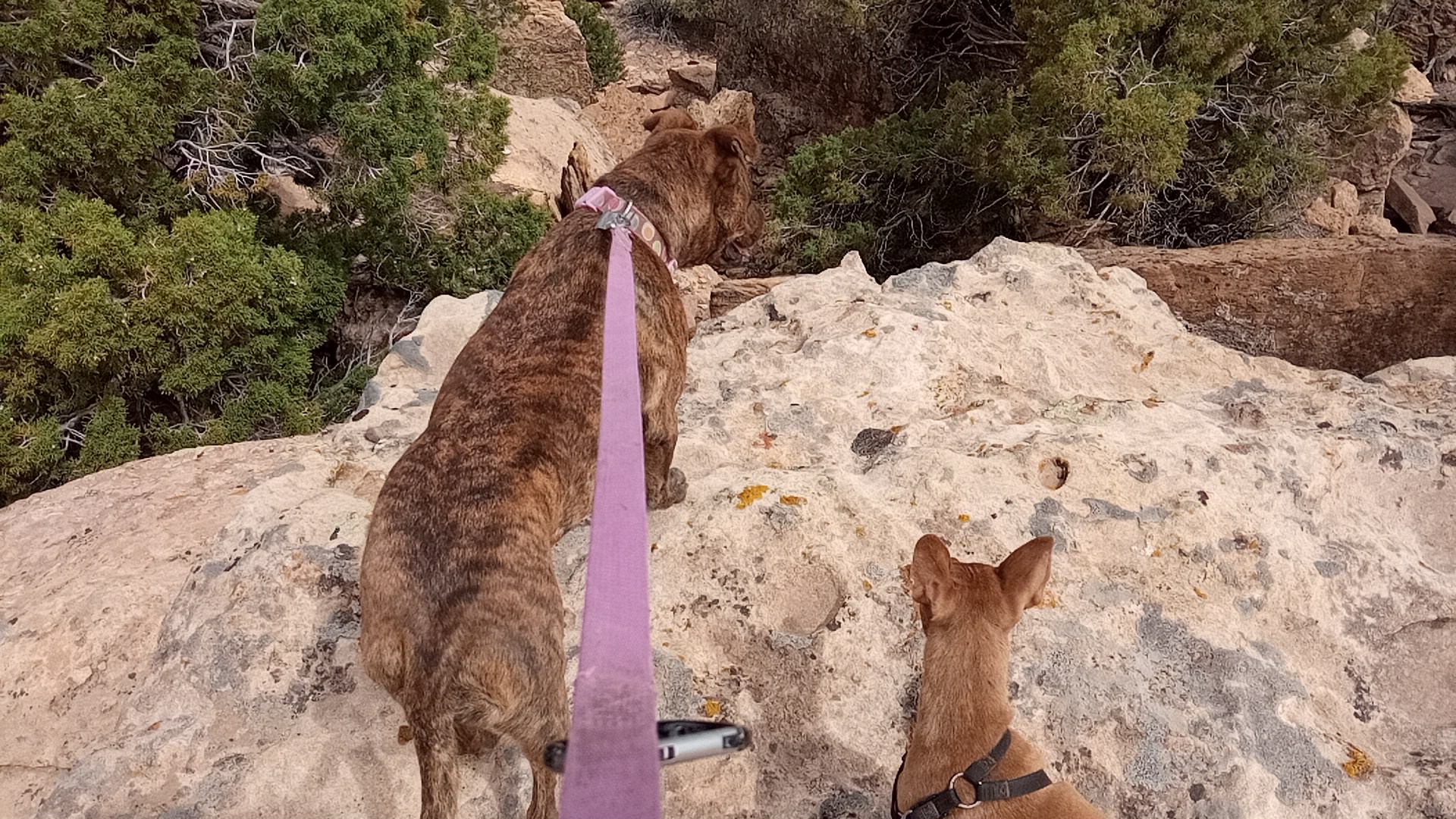