Muffin and I took off to see if we could get to the top of the local summit, as seen in this pic: 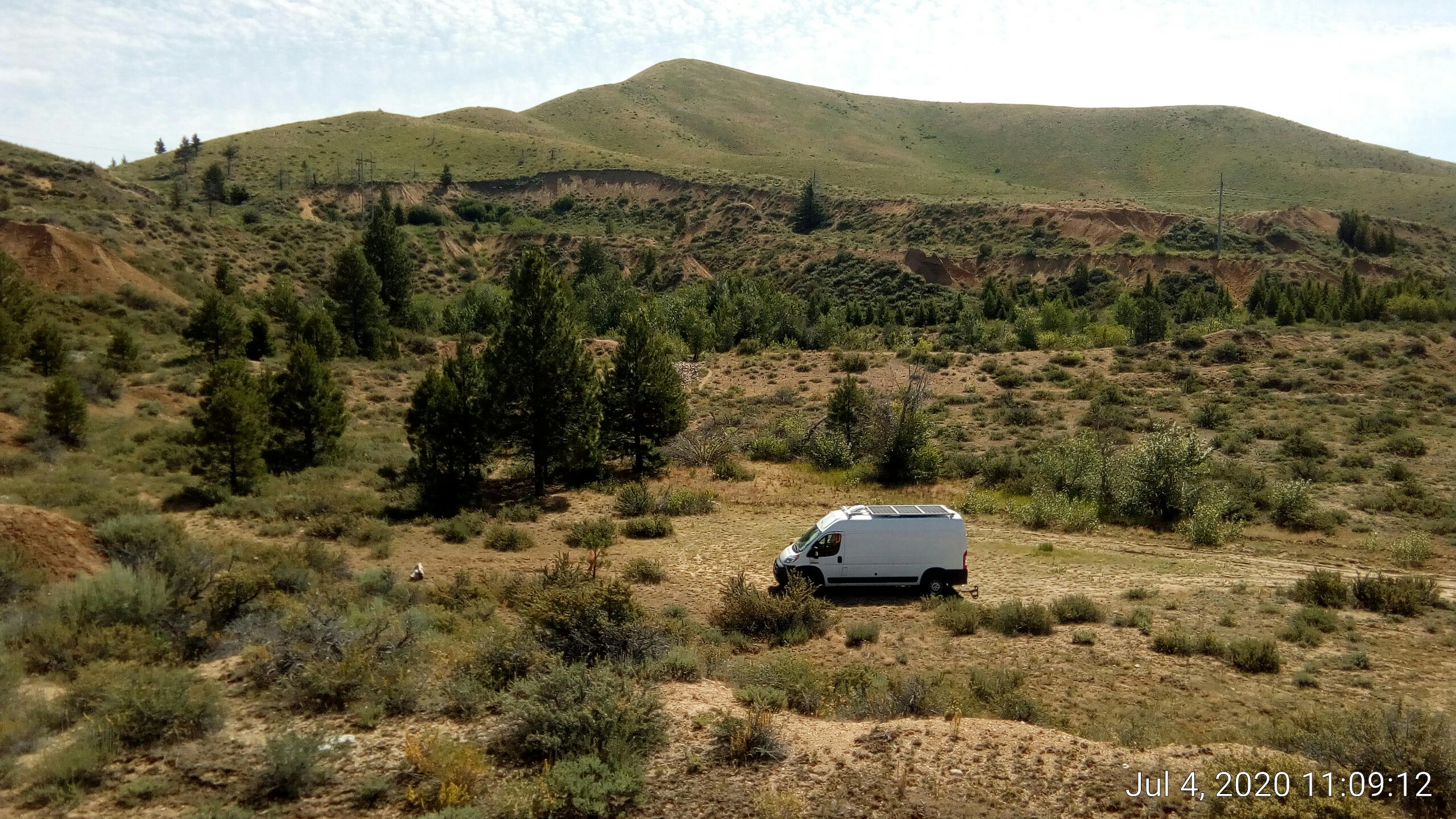 The weather was a bit breezier and cooler (low 70s) than  it had been the past two days so it seemed like a good time for it.

We started off in that general direction but there was a pond in the way: 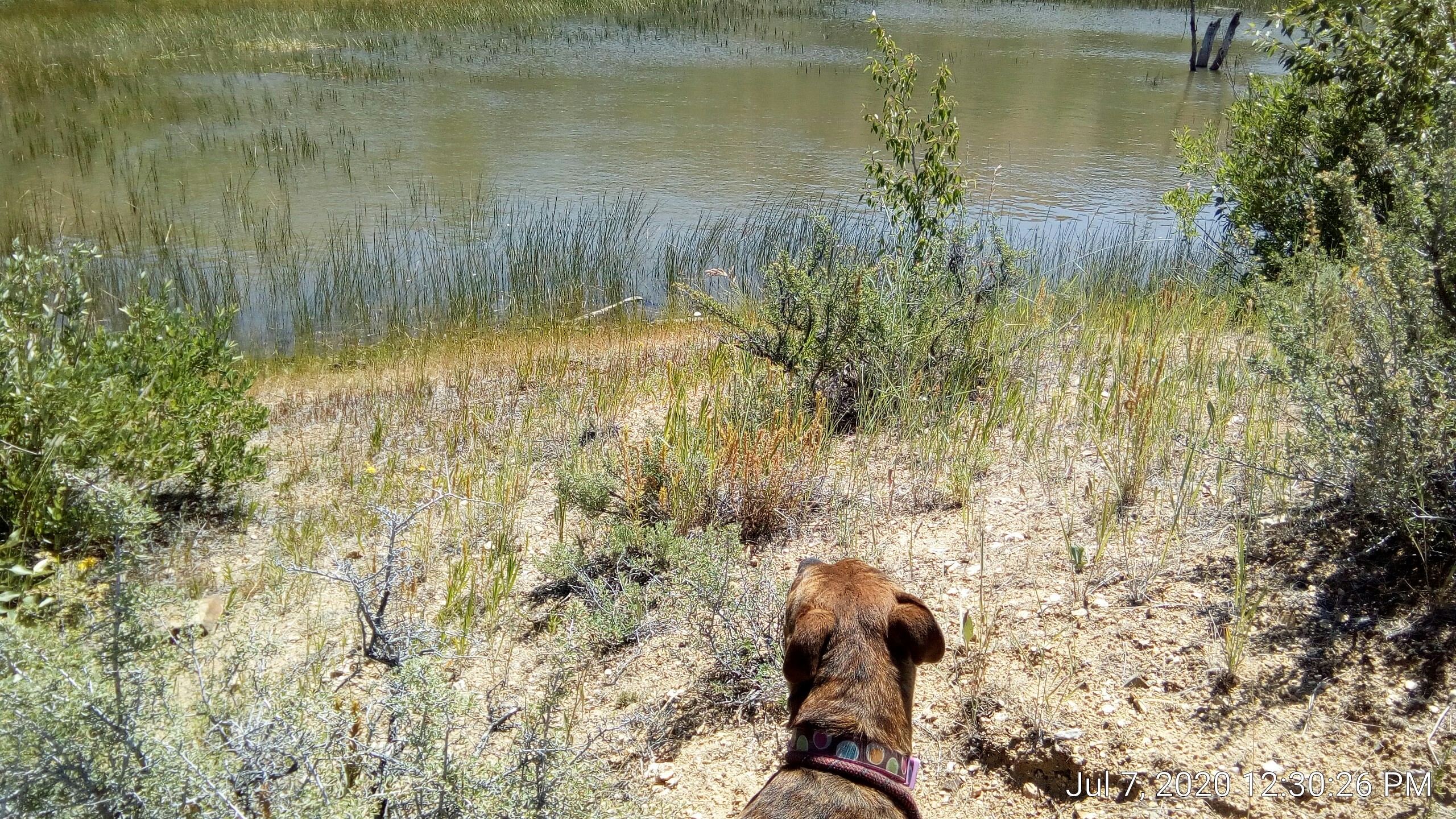 Not too exciting, but a low edge had been shored up with what appears to be scrap bits from a stone veneer business: 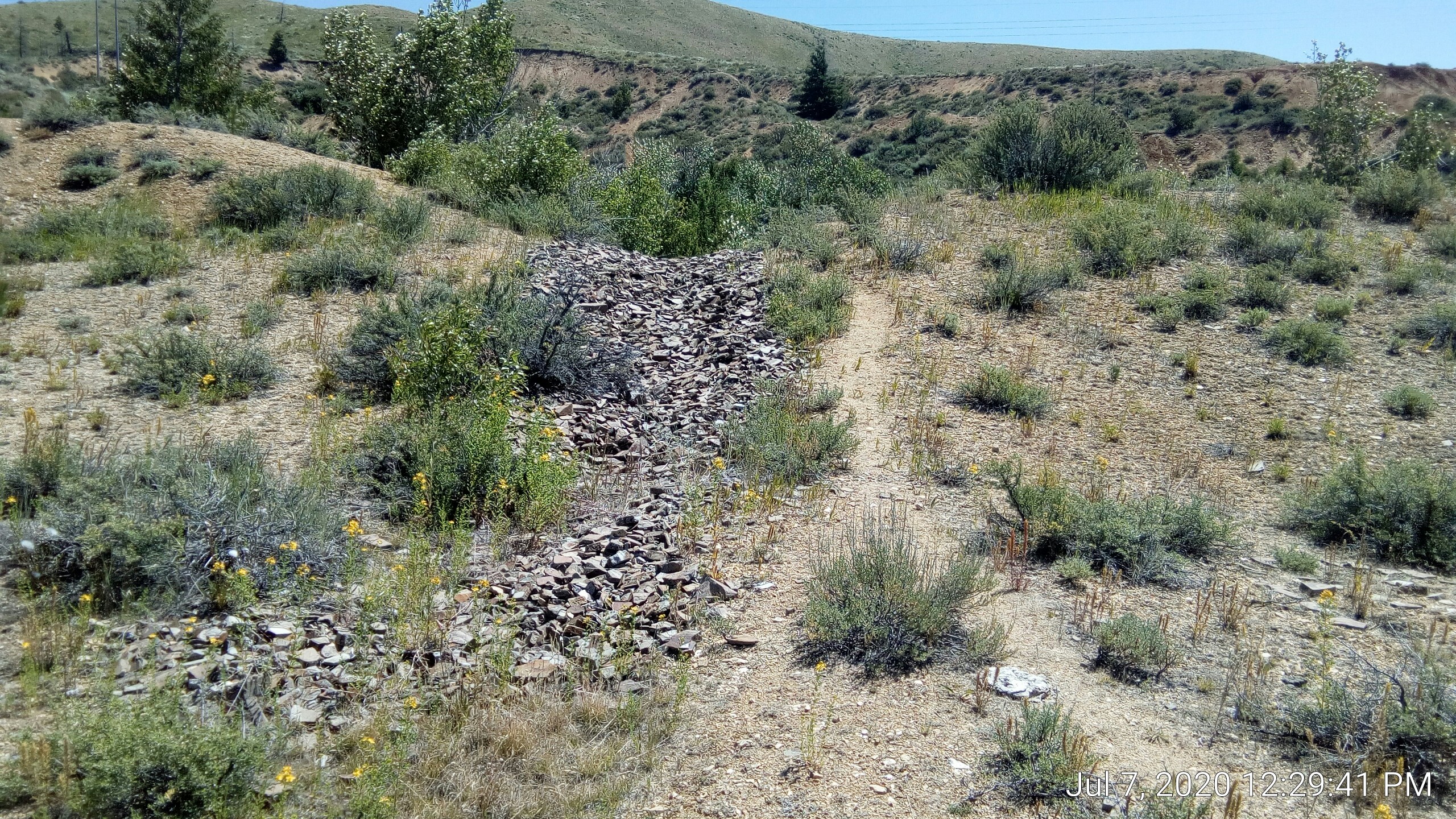 My guess is it was scrap pieces that broke after being cut into their correct thickness.

We turned to the south to go around the pond and saw a rough trail.  There was some big cable tossed to one side: 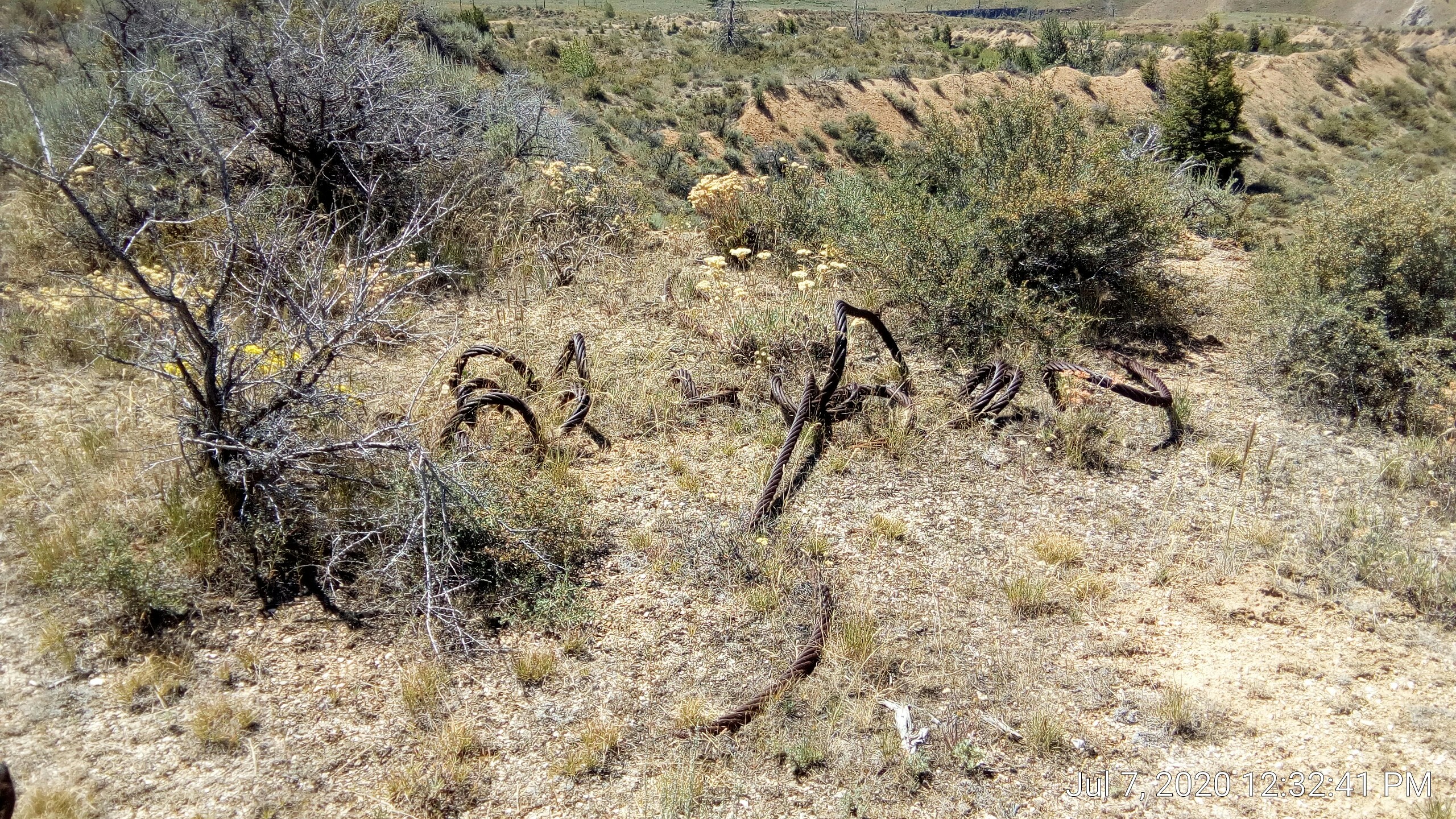 This is very near a power line right-of-way, so maybe left over from construction?

Looking back to the west we can see the van on the right side: Didn’t know it yet, but we’d run into a decent two-track gravel path to allow utility folks to maintain the power lines.  And following that for a while got us a view of the alleged reservoir: 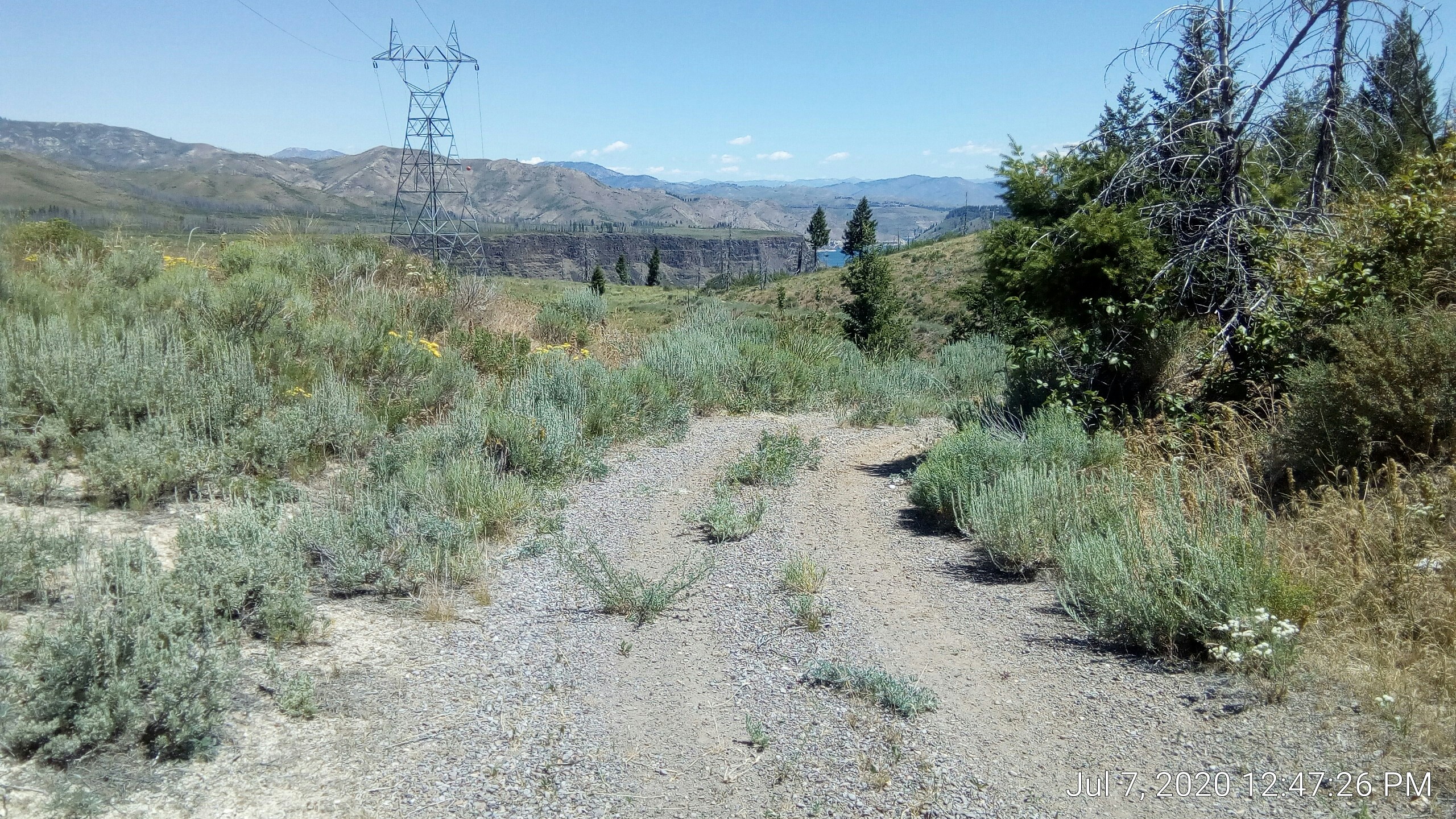 That path was quite steep and washed out in one place.  We were breathing pretty hard by the time it leveled out and we took the pic.   Power line structure visible on the left side.

The local summit was east of us, and there was no trail or anything.  We just picked our lines.  Definite cardio workout: 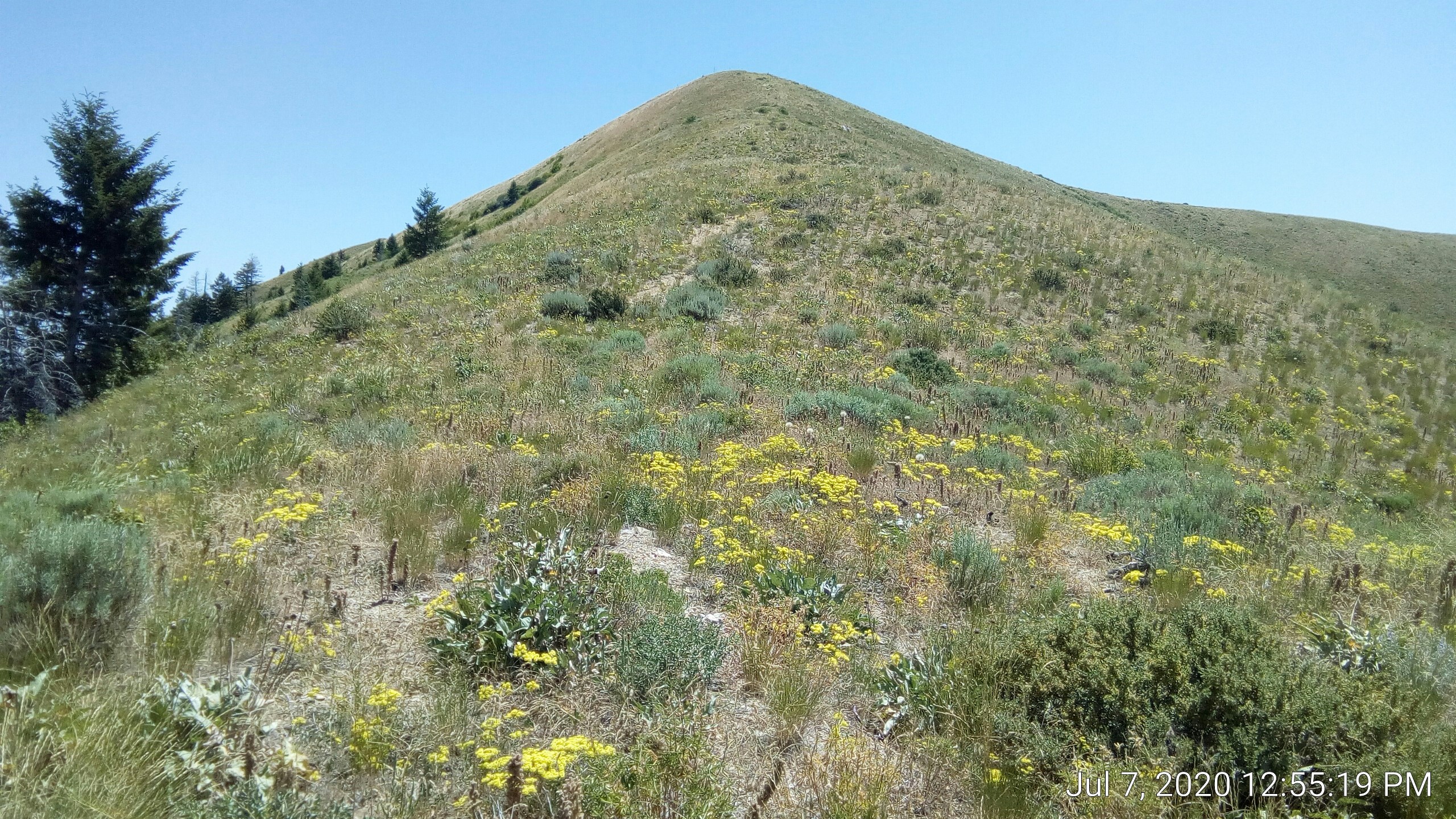 At the local summit  reservoir was more visible in context: 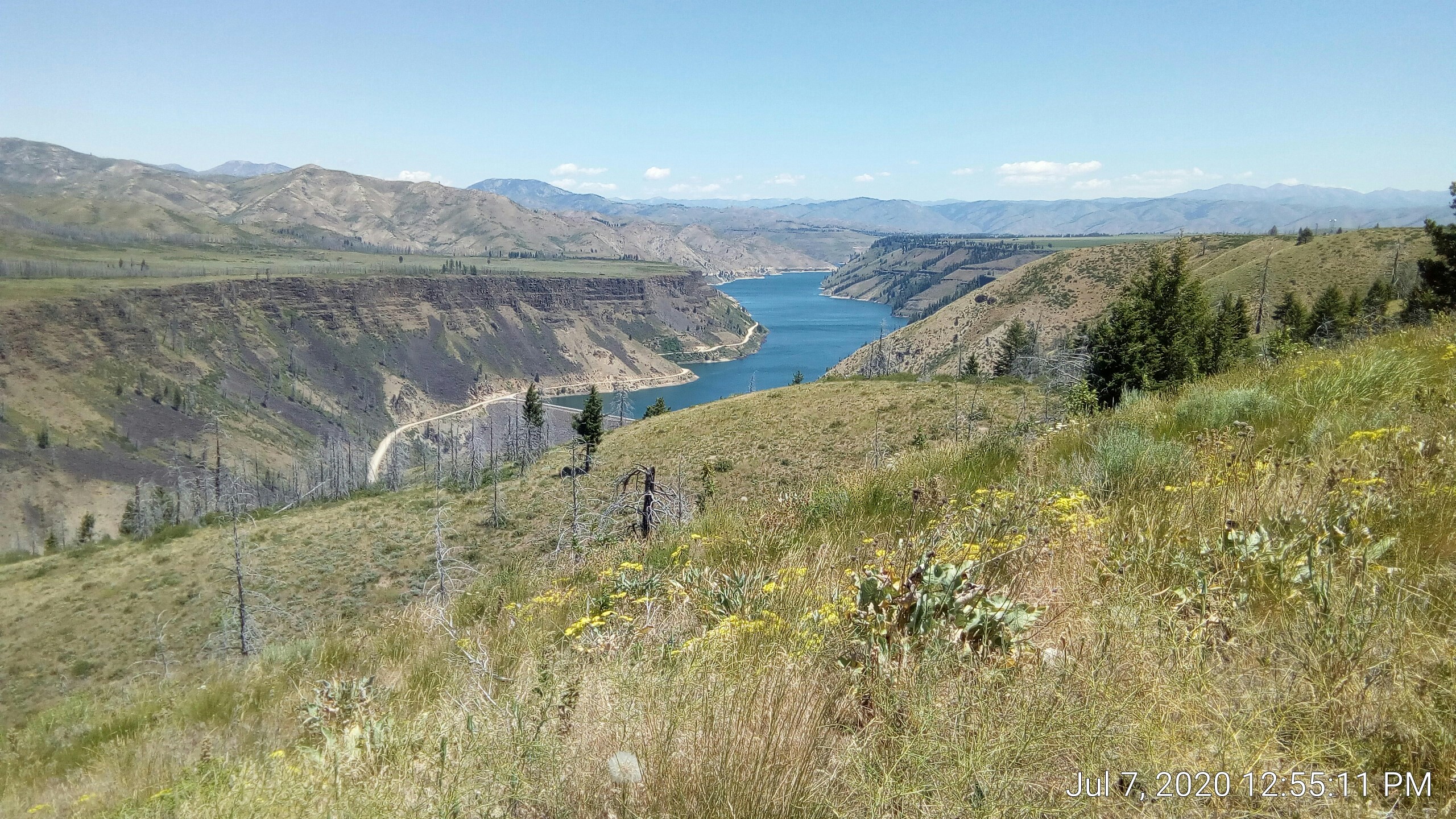 The dam is also visible at the lower left edge of the water.

Looking west.  The van is near the center, mostly obscured by the single clump of trees near it.  :-)  You can extrapolate by looking at where the dirt road goes toward the center. 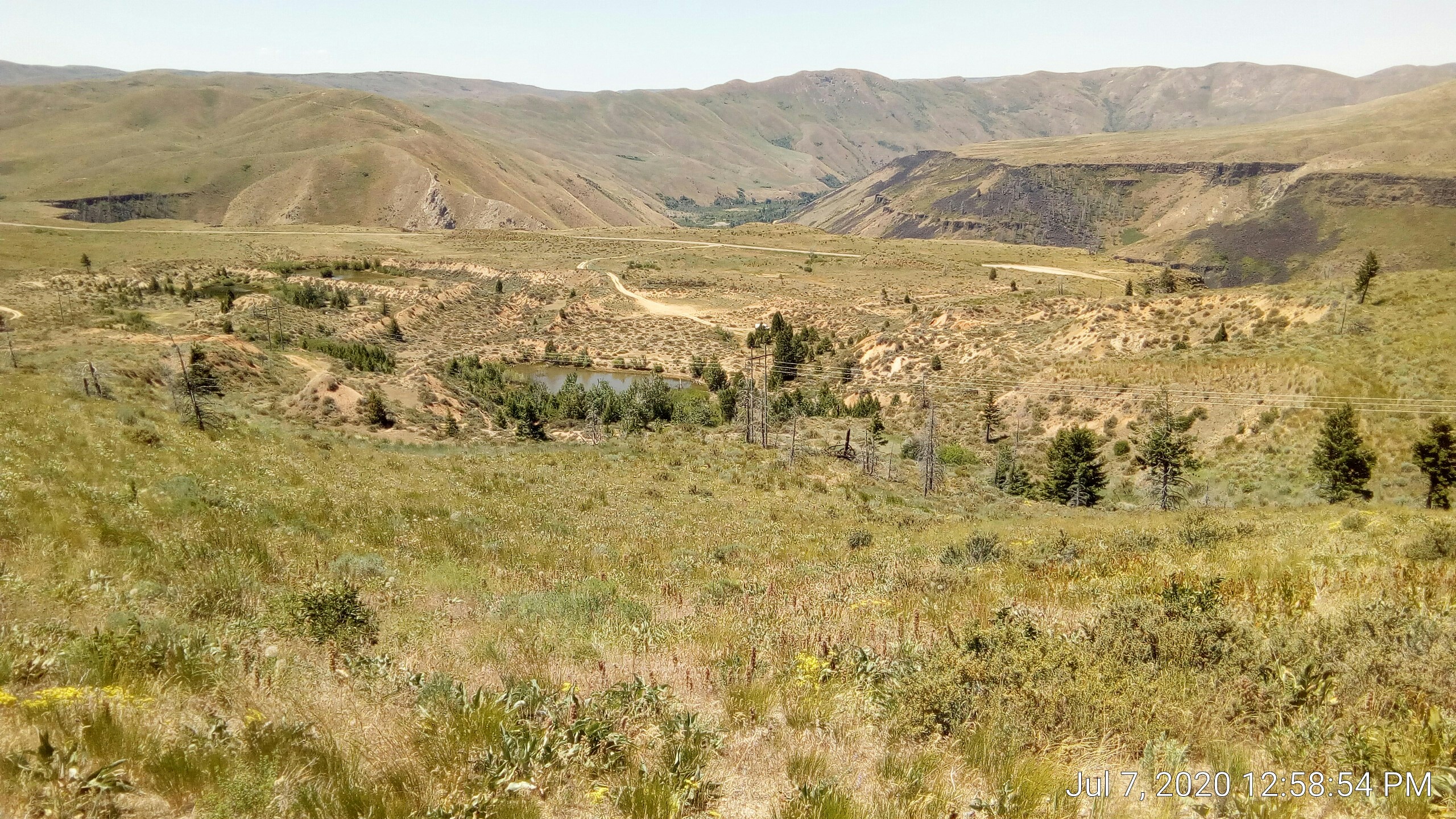 We came back down and continued following the right-of-way to the reservoir.   On the north side of the steep hill there was a place that was largely protected from sun, and hence had more water and growth.  It was the only place I’d seen in this NF that looked anything like a forest: 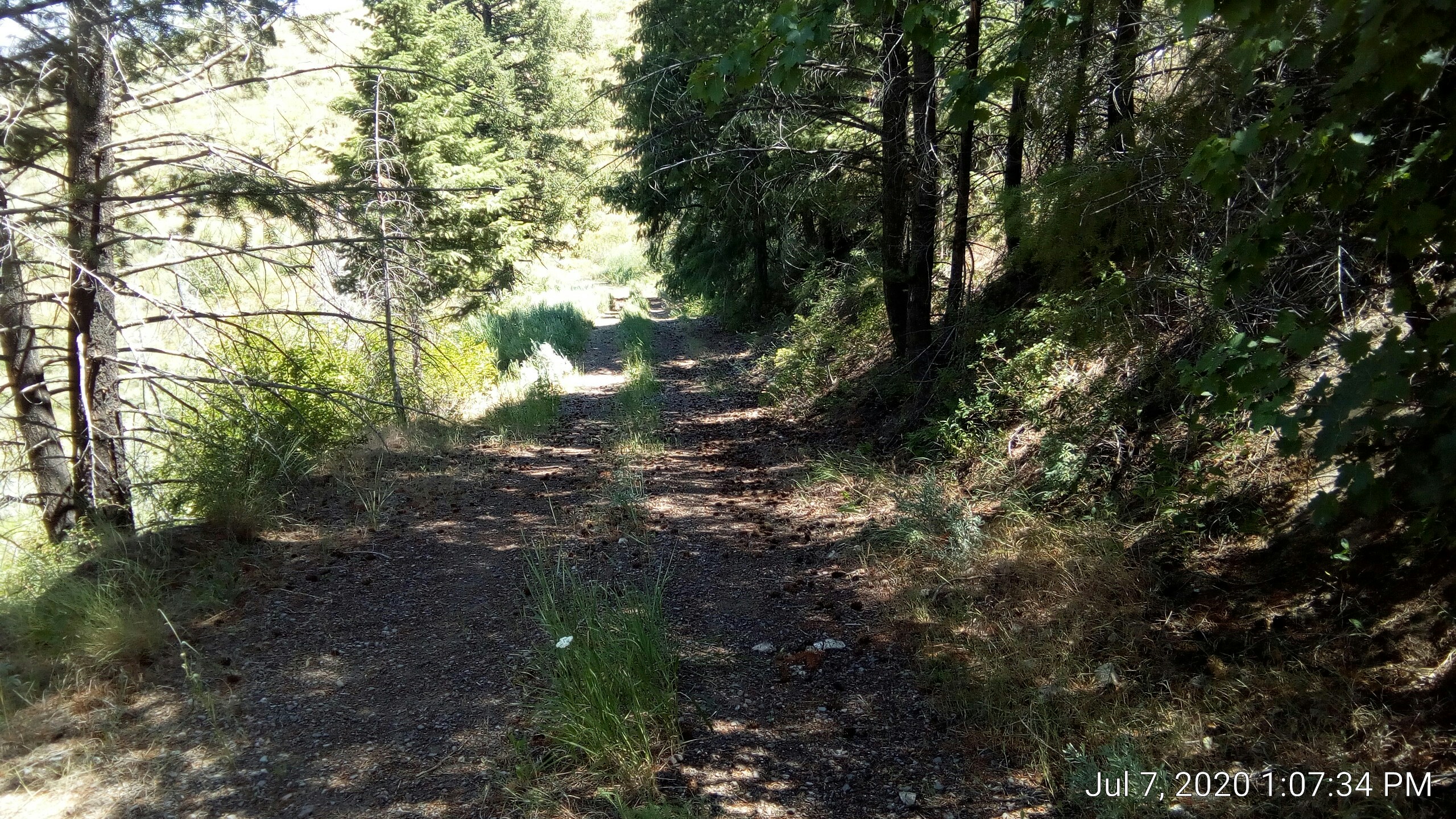 In this shaded area there were two scat deposits that looked somewhat canine only huge.  About  2” diameter, the thickest I’ve ever seen.  Most pieces were about 6” long but one (not pictured) was 10” long. Huge wild dog?  Wolf?  Cougar?  Bobcat? The only reference I could find for something that leaves this thick a scat in the area is black bear.  I did some digging and in 2017 some sites in this national forest were closed due to black bear activity.   Grizzlies have been seen here but are rarer.

Maybe I’ll keep my eyes peeled a little more when cooking outdoors.  I don’t want to mess with any carnivore/omnivore that poops that big.

Anyhow, we continued down the right of way to where it started to go down into the canyon.  Got the best shot of the dam that I could: The utilities lines go down into the canyon so I assume they are making hydro power down there.   [Updated, yes, 40MW].

Sad reminder:  it was partially built with labor from the Minidoka camp (near Twin Falls) where Japanese-Americans were interned during WW2.

We headed back, hot and tired.  Muffin’s tongue was hanging out enough I figured I’d let her walk off-leash a while.  She stayed within about 50’ for the most part, much less than when she’s feeling feisty.

She did end up on a ridge at one point and had to figure out how to get down.  I started to take her pic when she was looking down but she jumped off by the time the camera focused: 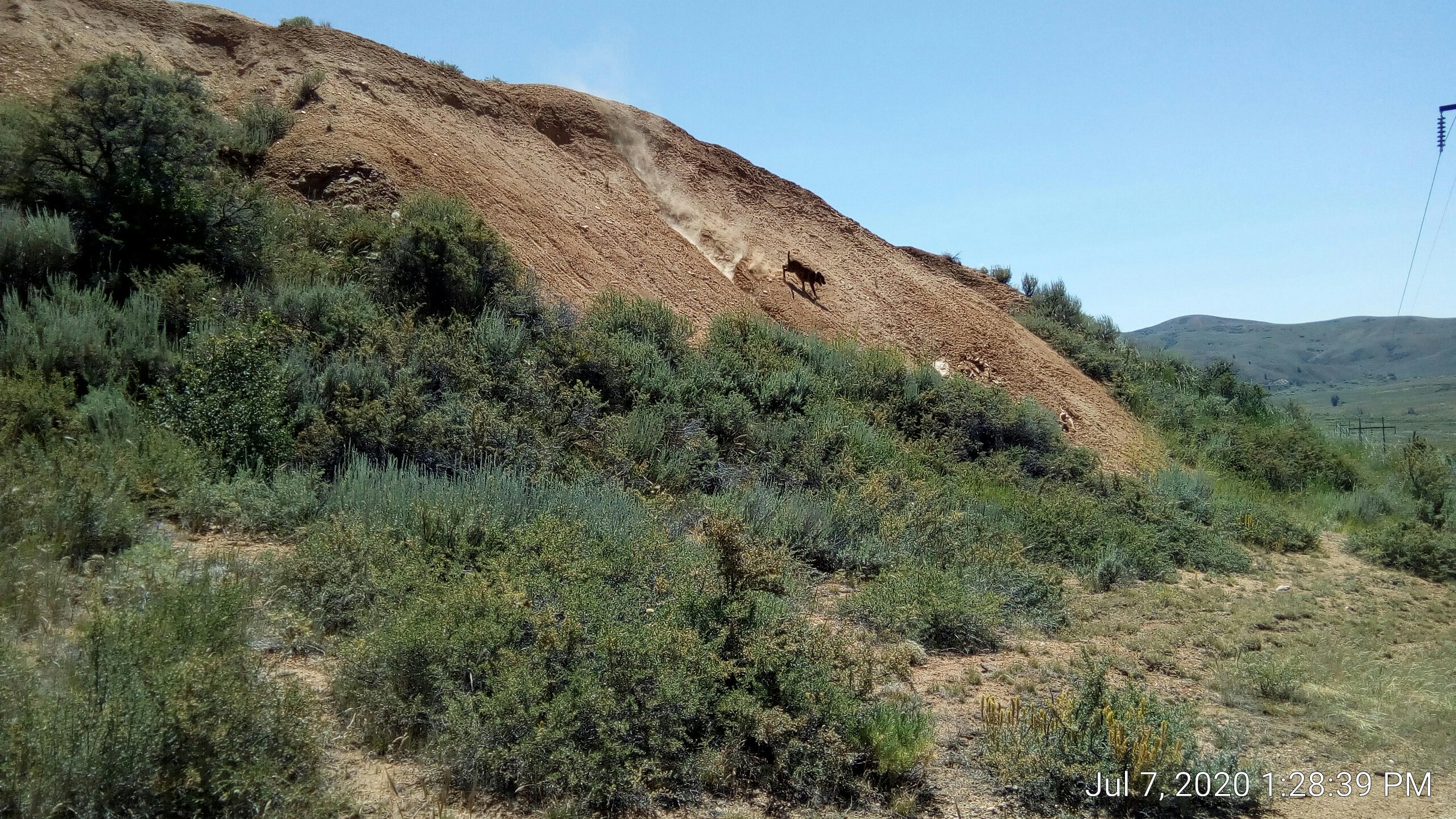 You can see from the dust kicked up that there was some sliding and loose rock going on.  She came right over (relieved?) and I leashed her for the walk back.

I strung up the solar shower bag in a tree and got cleaned up.  I’ll sleep good tonight.