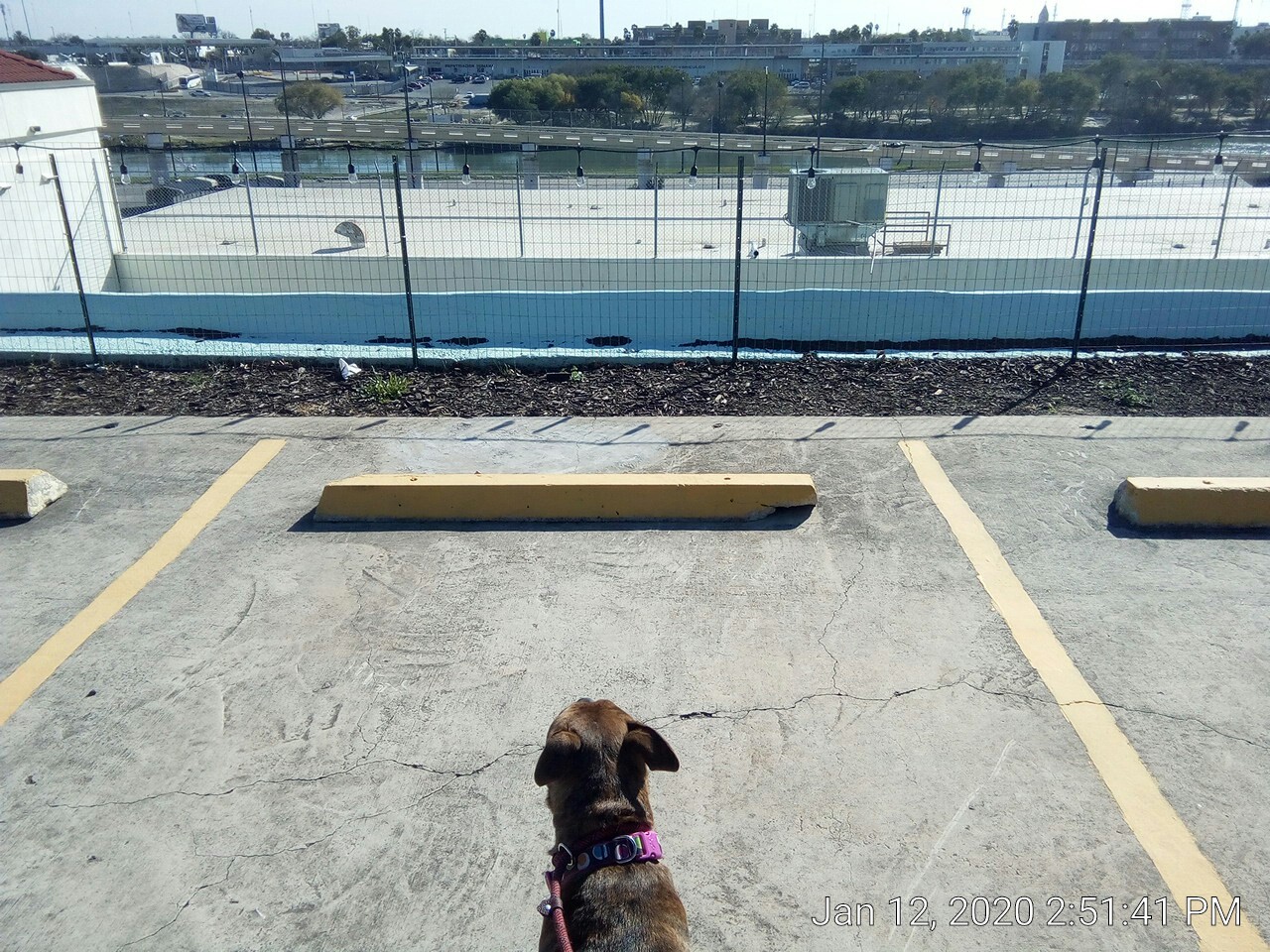 Muffin looks across the border at Nuevo Laredo[/caption]

Laredo is like El Paso’s homelier, ill-tempered sister, and reminds me of how rare and wonderful ELP is.

where am I from

I was getting an ice cream near the greyhound bus station;  several unhinged people were in the immediate area.  I blame this on the bus station not on Laredo.  :-)  One dude eyeballed me for a while before shambling over “where are you from?”  That’s a bit of a weird opener.  I told him El Paso and he said “there aren’t too many of us here.”

I strained to understand what this meant.  Who or what are “us”?  El Pasoans?  People eating ice cream mid-day while walking dogs?  People near the bus station?  People who are (or are not) actively mental?  How did he know I wasn’t from there and why did it matter?

While I pondered these things he added “It’s really dangerous around here.”  Didn’t feel dangerous to me and I said so.  I didn’t mention the shoulder-holstered 9mm that might adjust my perception of neighborhood danger.   “Just don’t go to Mexico!!!” he warned. I told him I’d just come back from lunch there the day before.  He seemed amazed.  I was amazed he could peel himself off cable news long enough to venture out in public.

Later that afternoon I realized Shambler meant “there aren’t many caucasians here”. I thought back over the past few days to see if I could remember any white folks: nope.  I reality checked on wiki:

I guess he was right about that part.  Huh.  I hadn’t noticed.  People take heat for saying “I don’t see color”, but race is one of the least interesting or operative things about a person.  I had noticed how Spanish-forward Laredo was but that’s not necessarily a race thing.  I’d lived in Europe as a young man and never went to an Anglophone country.

Although I am a heathen I really love old churches.  I was sad to see the 18thC. Laredo cathedral was closed for reno: 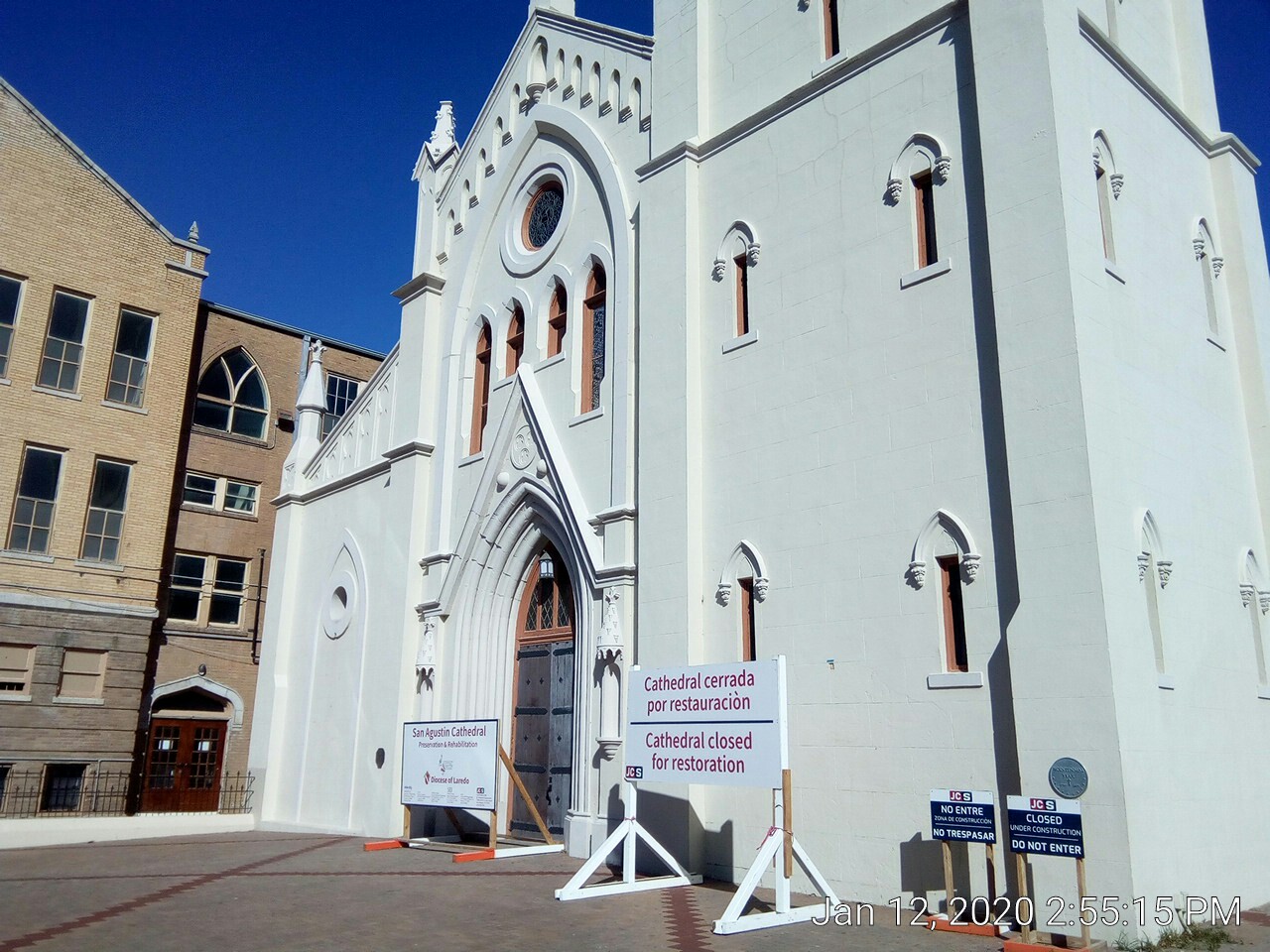 Just across the street is the old capital of the Republic of the Rio Grande. 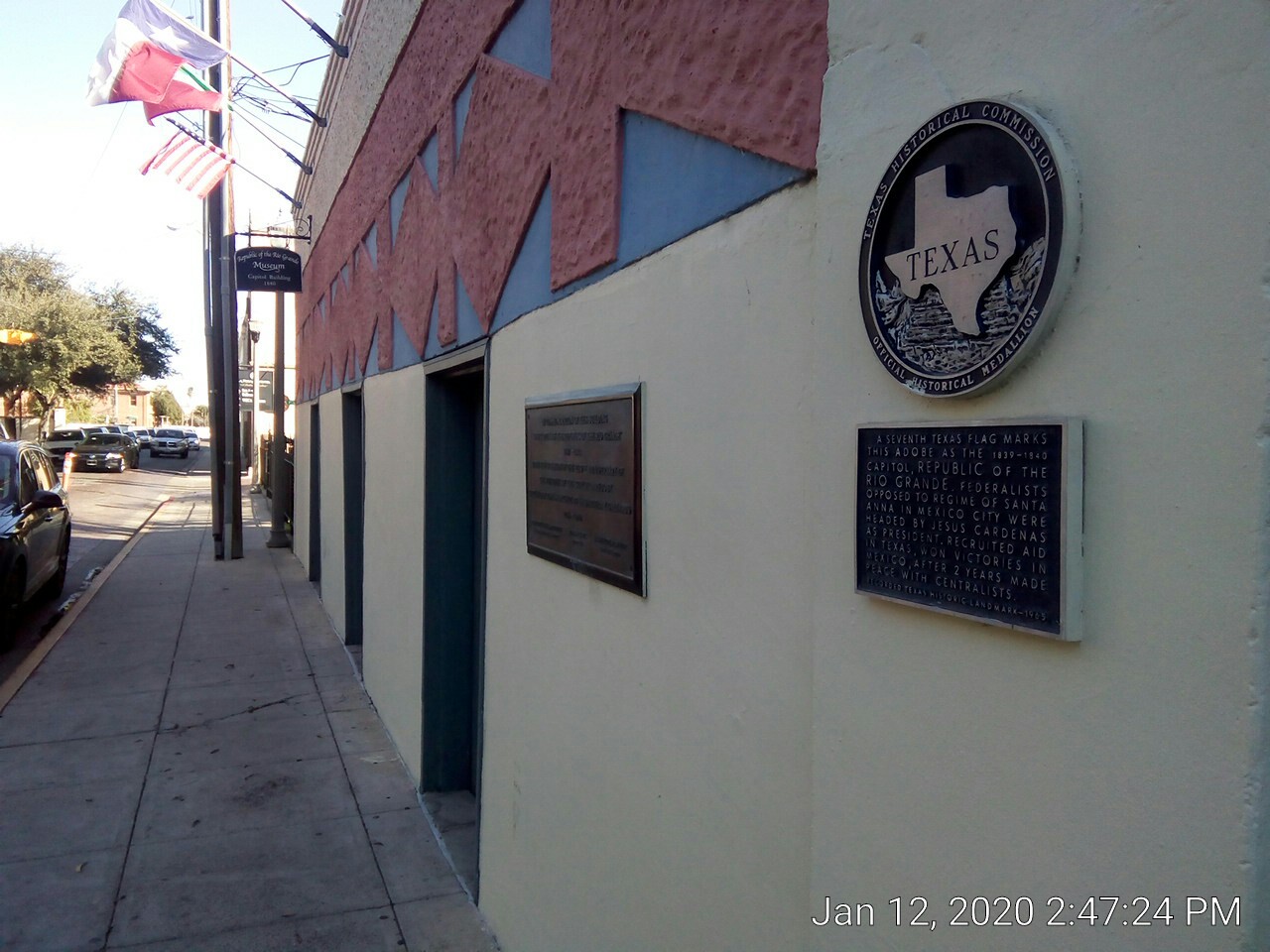 The three stars were for the three constituent states of the Republic:  Nuevo Leon, Tamaulipas (the state Nuevo Laredo is in), and Coahuila y Texas.

Next door to that is the beautiful (to me) Casa Ortiz: 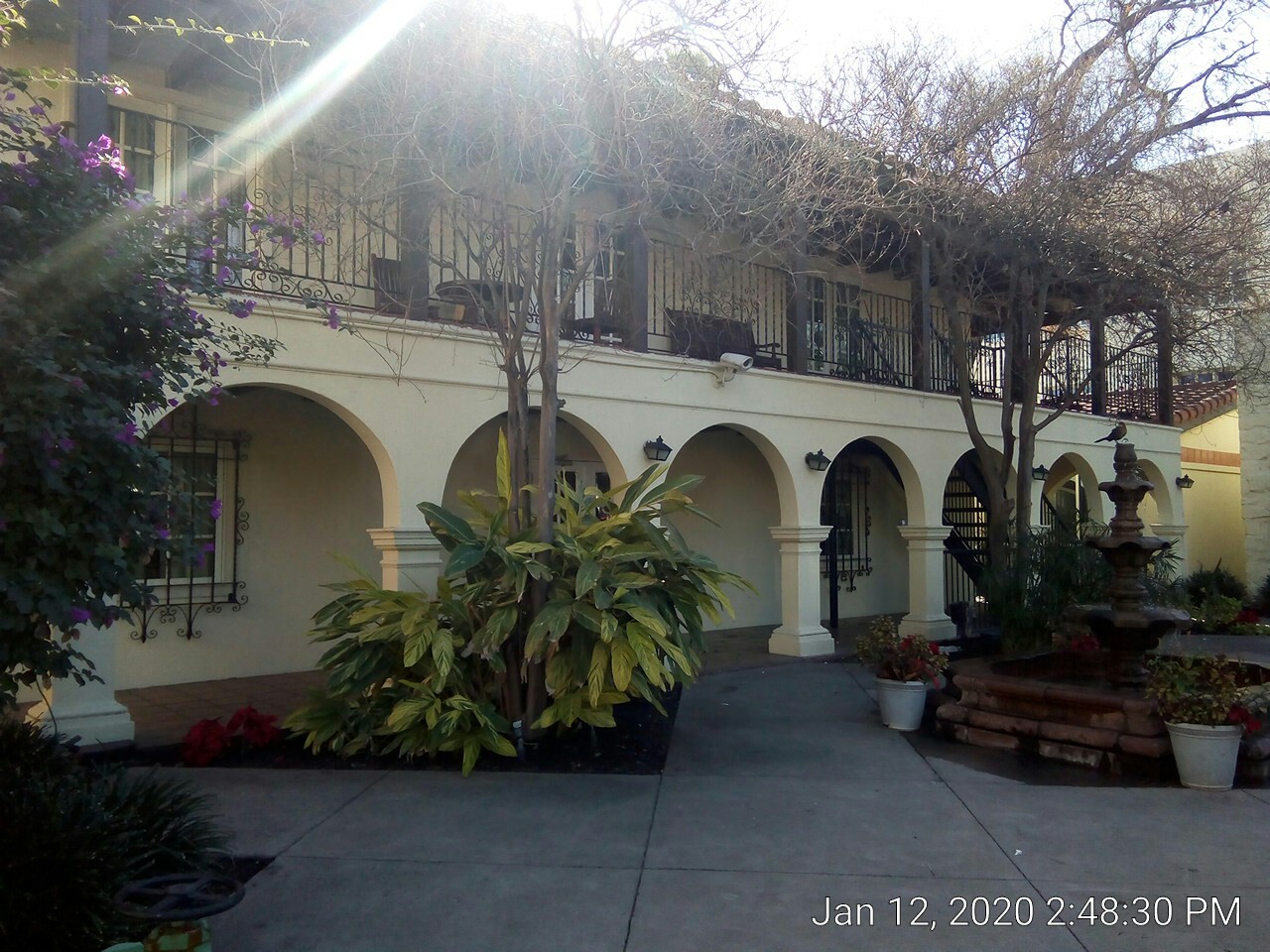 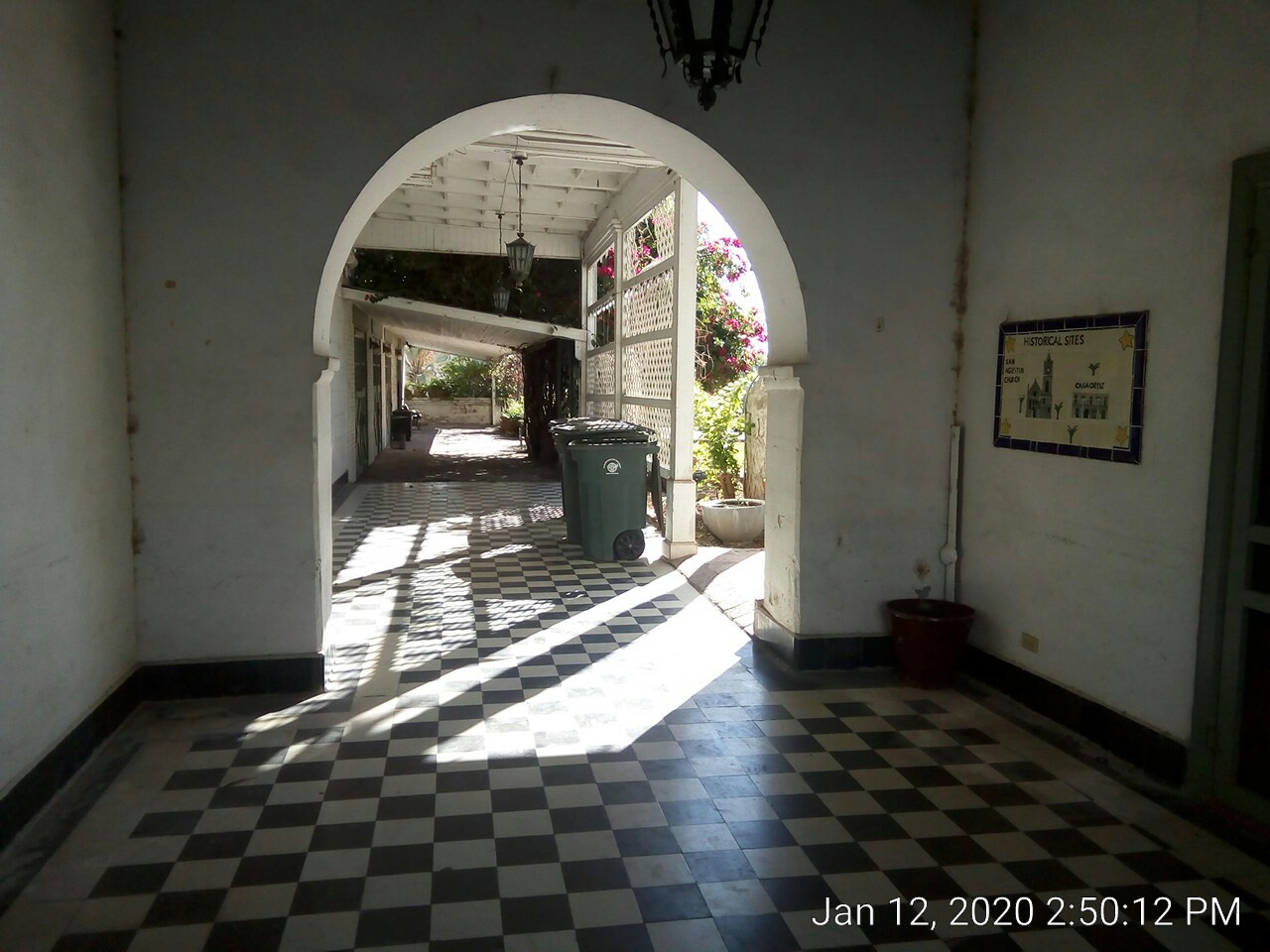 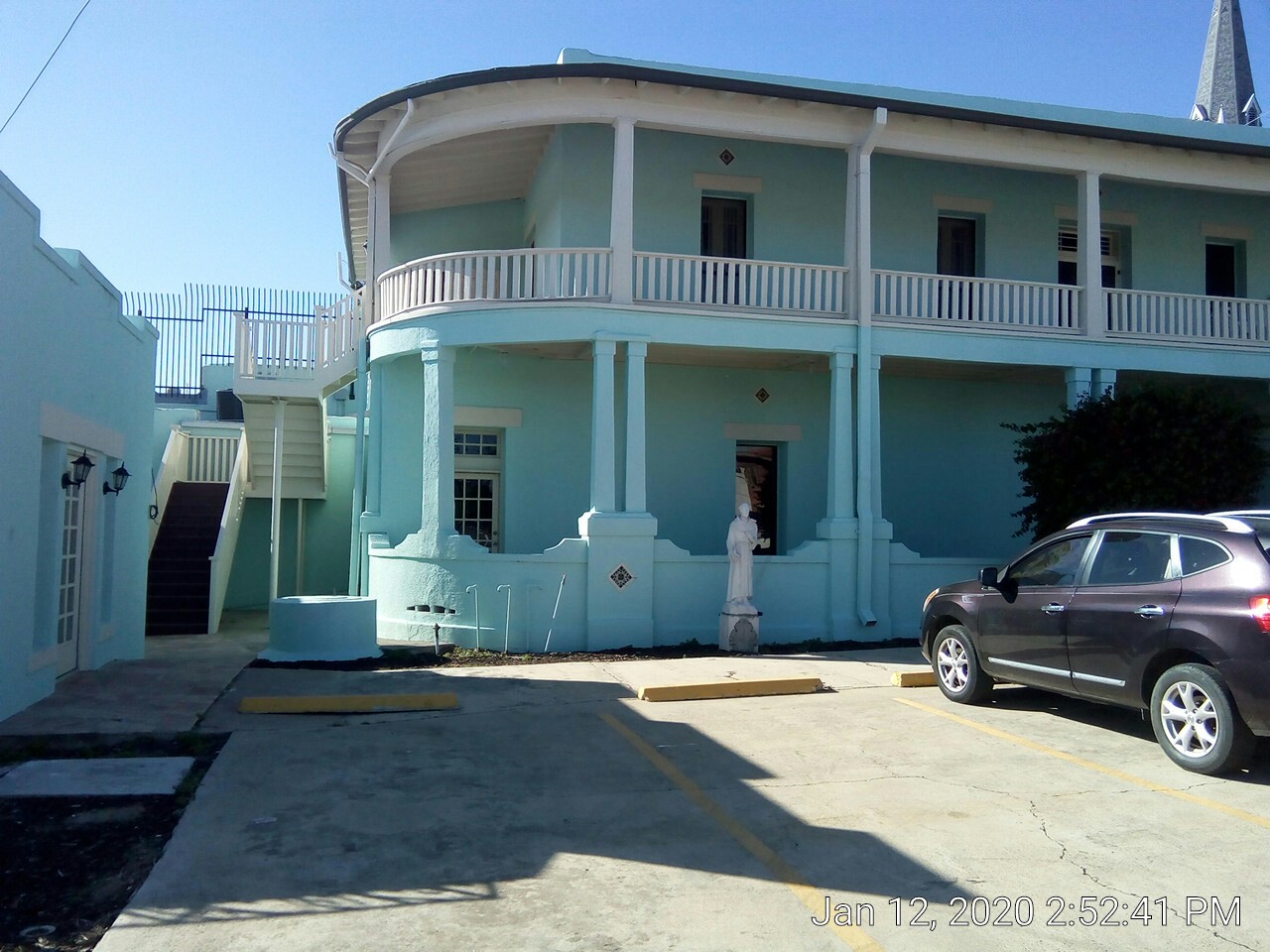 This is the parking lot Muffin and I were standing in for the pic at top.  Facing west here. The rear balconies have an overview of the river and of Laredo.

I had a bowl of menudo for breakfast.  Gratifyingly angry-red-looking, but not as savory as ELP style.

We headed NW, and passed over the Pecos River: 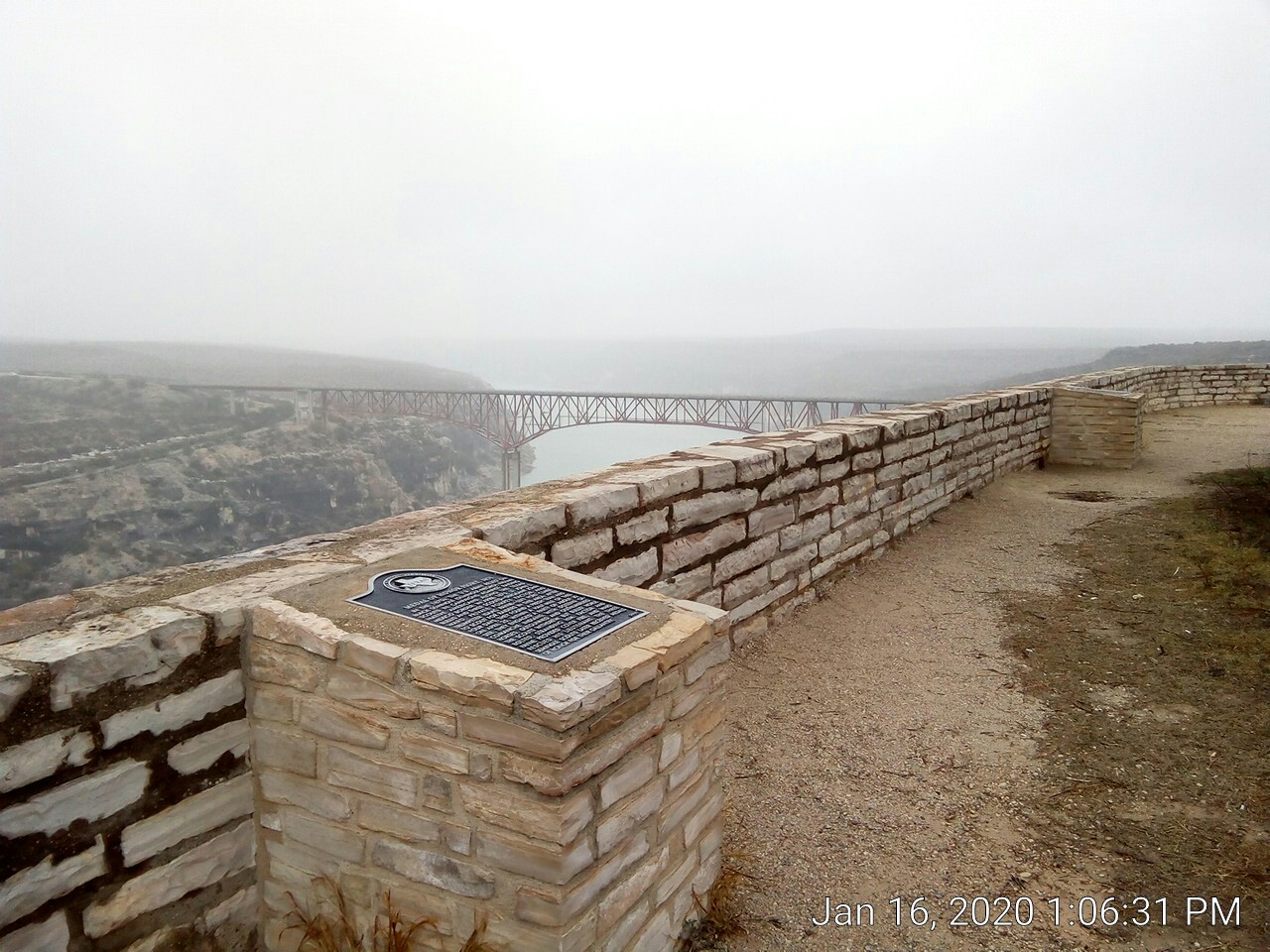 I missed when reaching to secure Muffin’s tiedown and she trotted away loose.  Luckily she didn’t have any bad intentions and came back a few minutes later. 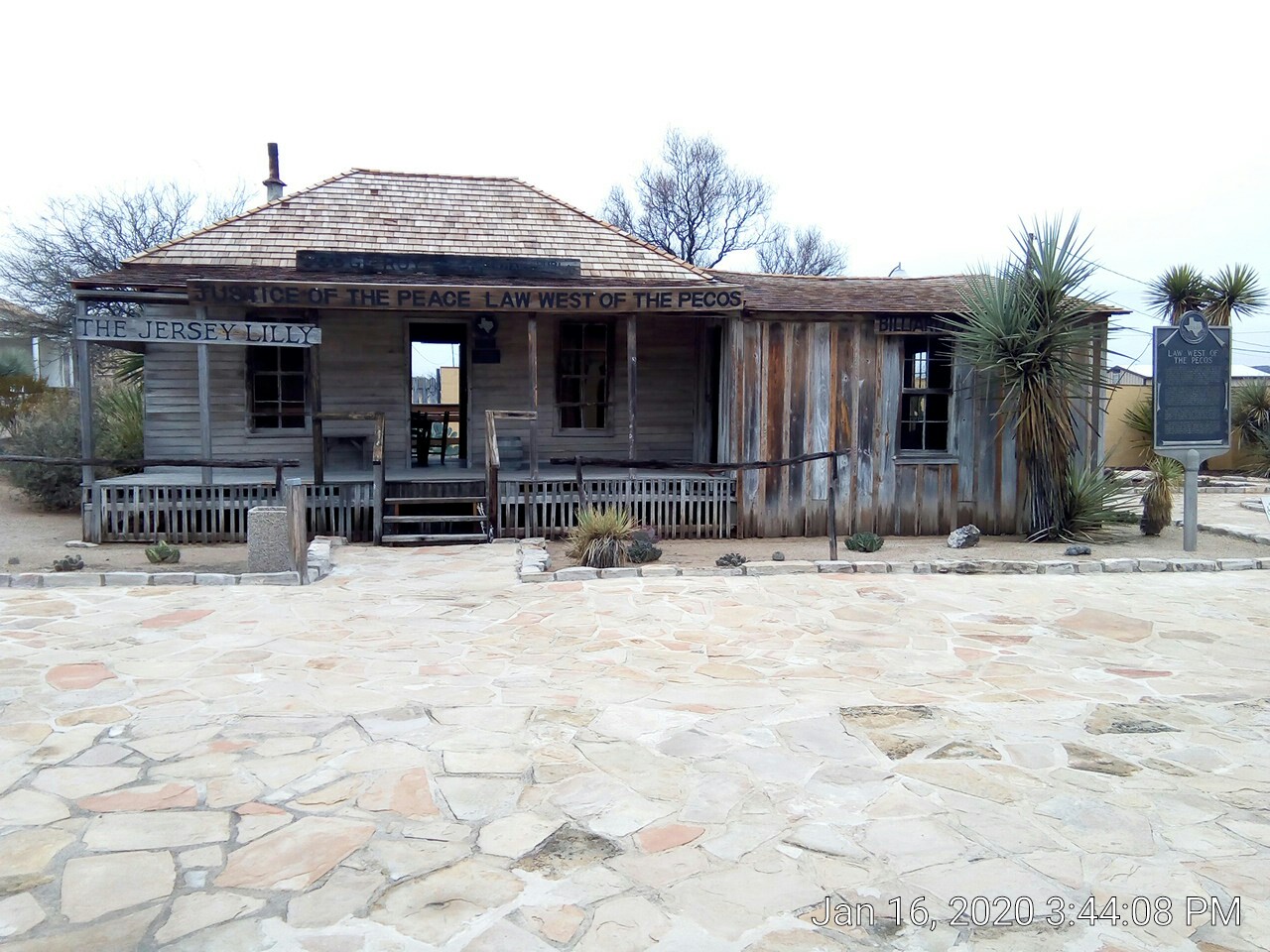 This guillotine device in the Jersey Lilly might have been a tobacco plug cutter.  Plug is a form of tobacco  pressed into a brick.  My understanding is that it enhanced blending, simplified transportation, and I’d also guess the reduced surface area slowed oxidation. 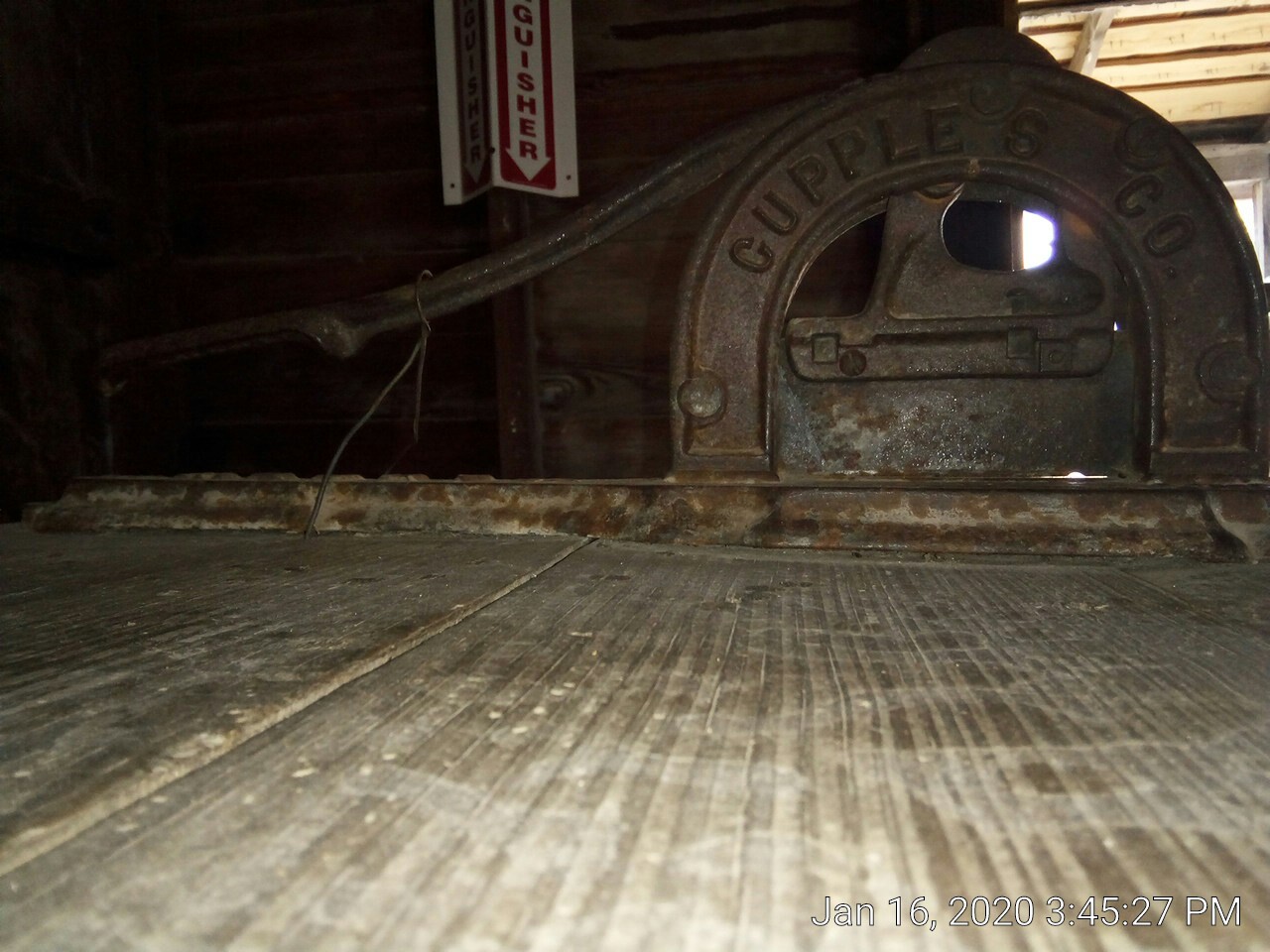 {updated to add:  confirmed that’s what it was.  }

They had one of the finest cactus gardens I’ve seen.  Varied, well-documented and clearly presented.  Some cacti were so small and camoflaged you might not seem them unless they encircled them as seen here: 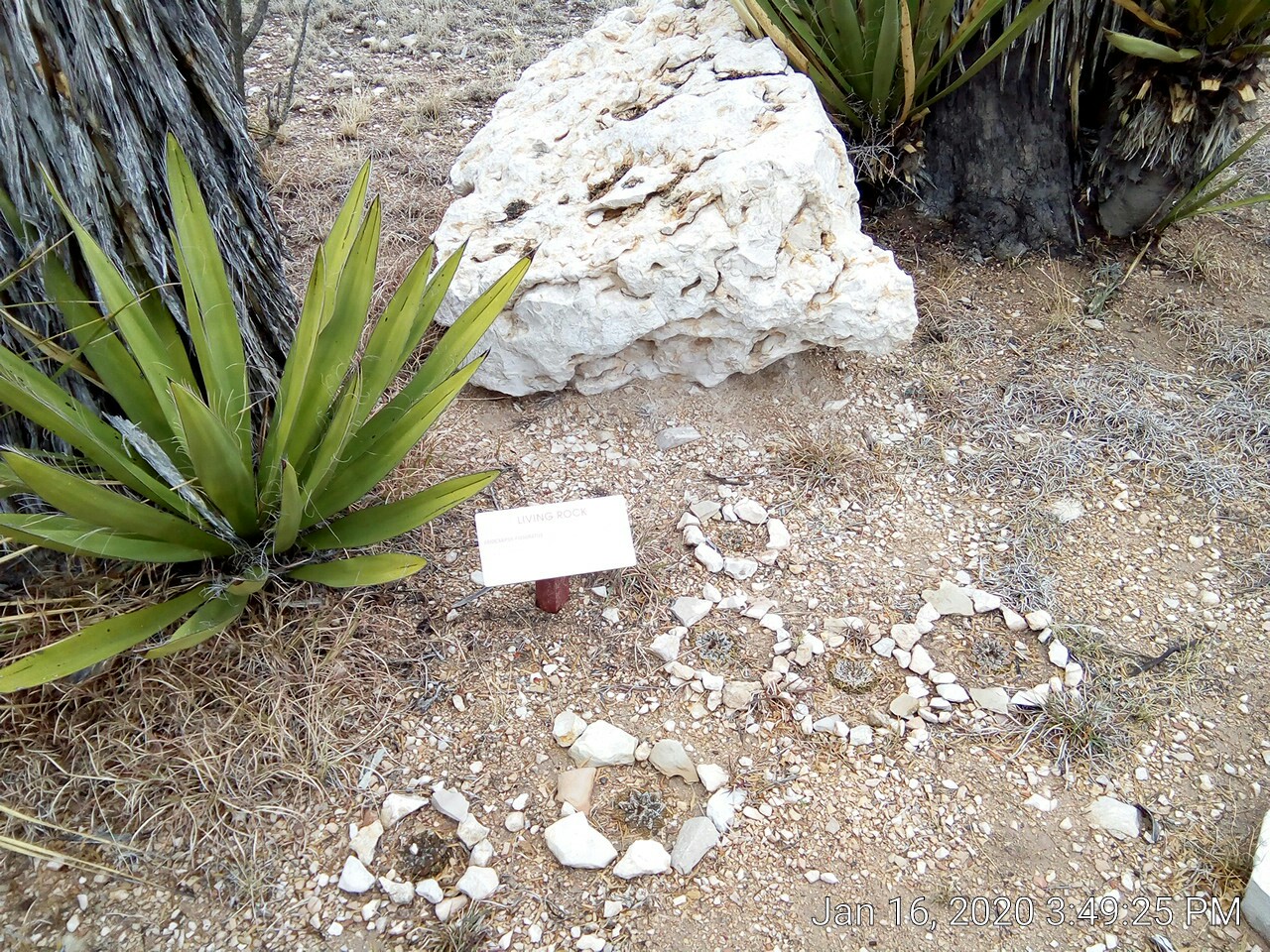 Afterwards, I noticed a clearly delineated wall of fog in a straight line, hovering a little ways off the ground in the distance: 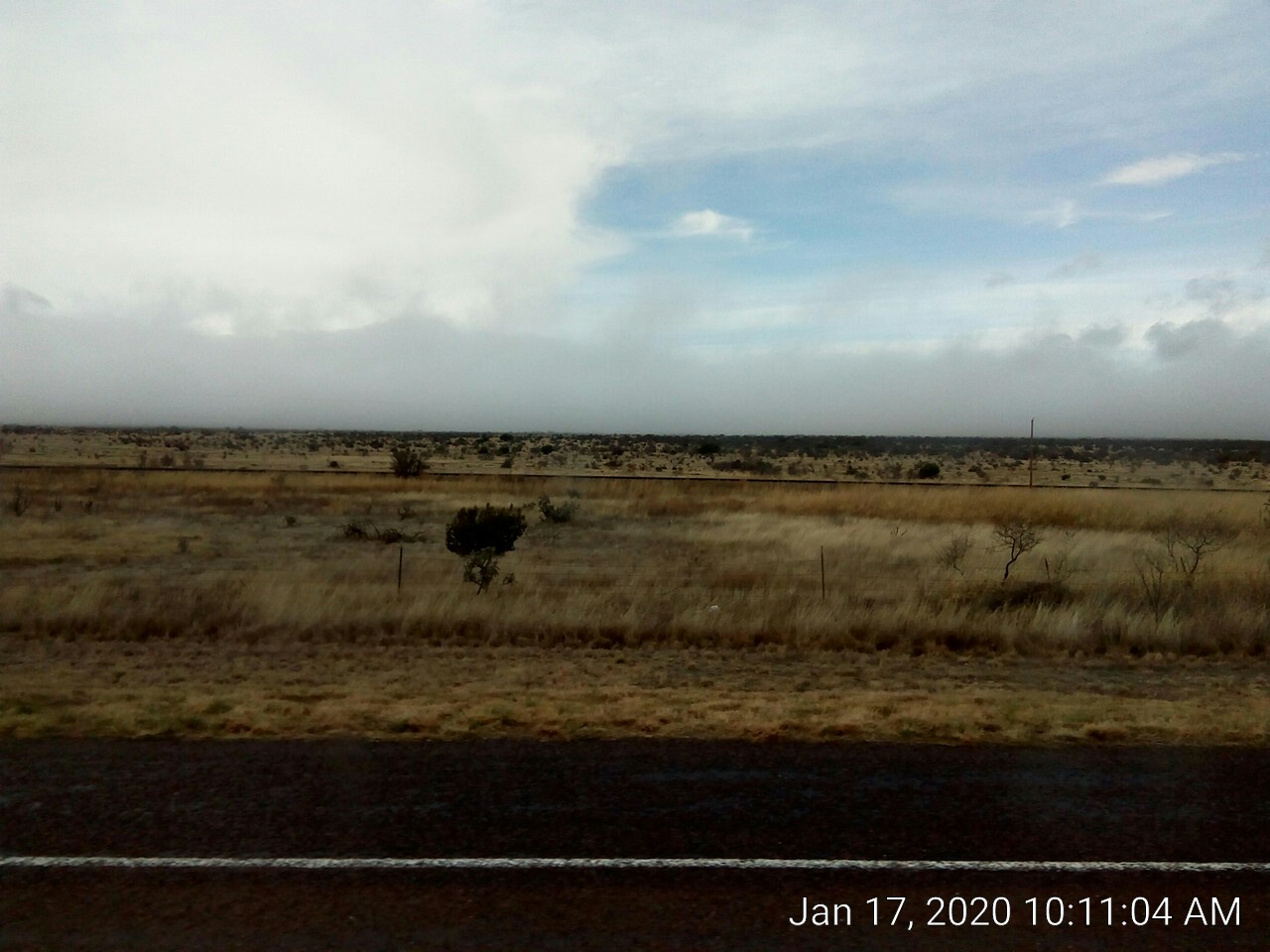