I had not gone to White Sands to see the dunes or the White Sands Missile range museum / park.   The reason for this is that WS is roughly the same altitude as El Paso, so there was no compelling climatic reason to drive there to camp.

I paid the $10 entry to the national monument to see the white gypsum sands;  most of the roadway is packed sand, quite hard in the tire tracks.  The dunes were white and made of very fine “sand”: 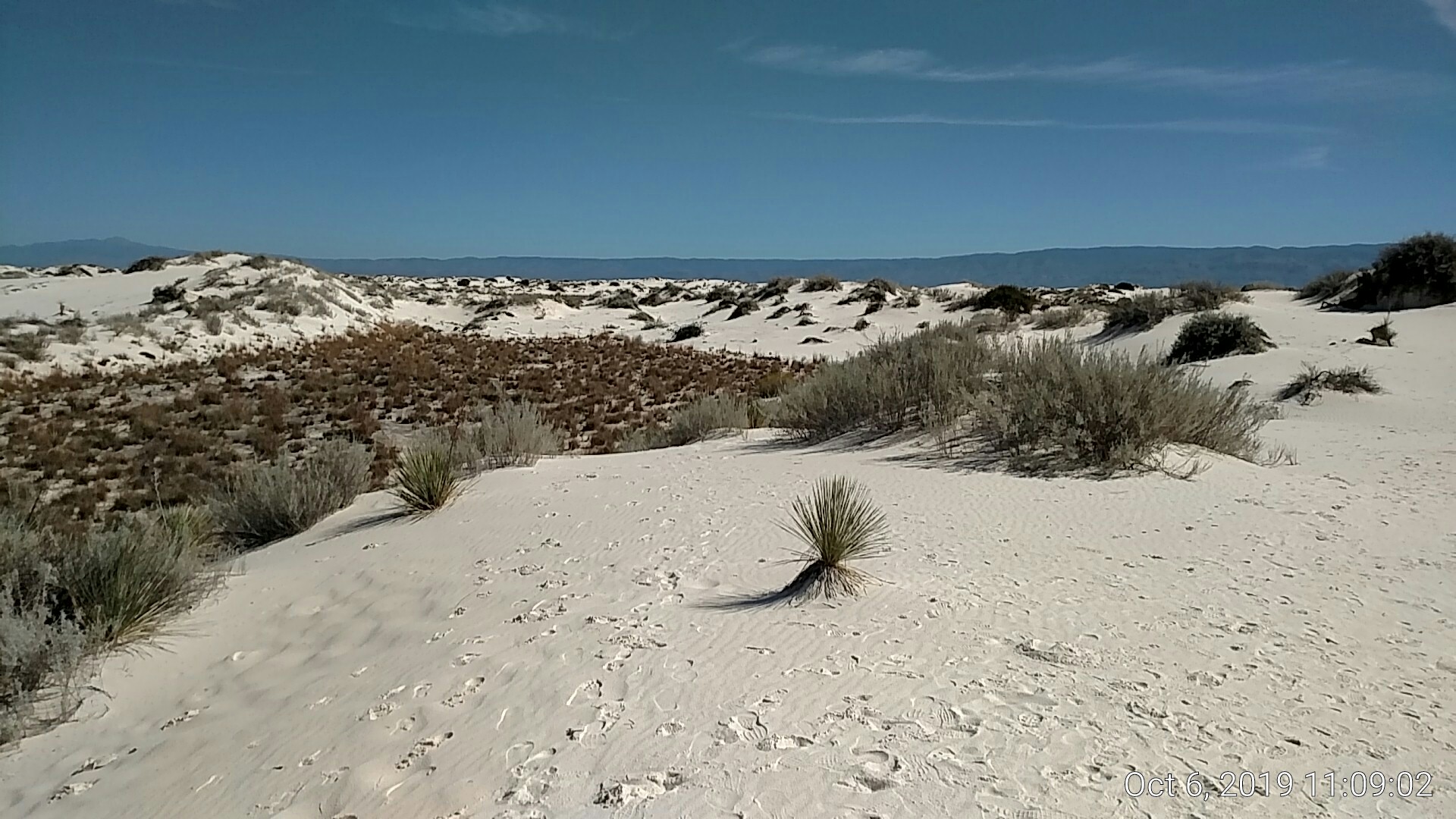 I drove the circuit and saw where people were sledding down the dunes on shield-shaped “sleds”.   There’s a better word for these things but I can’t think of it now.

The base is an active DoD installation so you have to get a visitor’s pass to enter.  Most people say it takes 15-30 mins for them to run the NCIC III checks before issuing your permit.  In my case it was immediate – less than a minute.  I don’t know if this was due to my recent passport renewal, SENTRI approval, or Tx permits.

The quick turnaround was nice because I’d been held up on the highway that runs past the base;  it had been shut down for a missile launch of some kind.  I didn’t see anything, but the closed off area was near the “small missile range”.  Could have been some kind of small and fast weather sounder or something.  Or maybe even a static burn.

The museum, V-2 display, and missile park are just inside the base on the left.  You can see the taller missiles from the front gate, but I didn’t take a pic of that as the gates would have been in the shot.  Apparently pics are allowed in the park and museum, as long as one does not photograph the range area behind the park.

I knew the museum would  be closed, but the V-2 exhibit was also closed in defiance of the posted hours on the door.  Too bad, as it’s supposed to be the most intact V-2 in existence.  Here are pics through the glass: 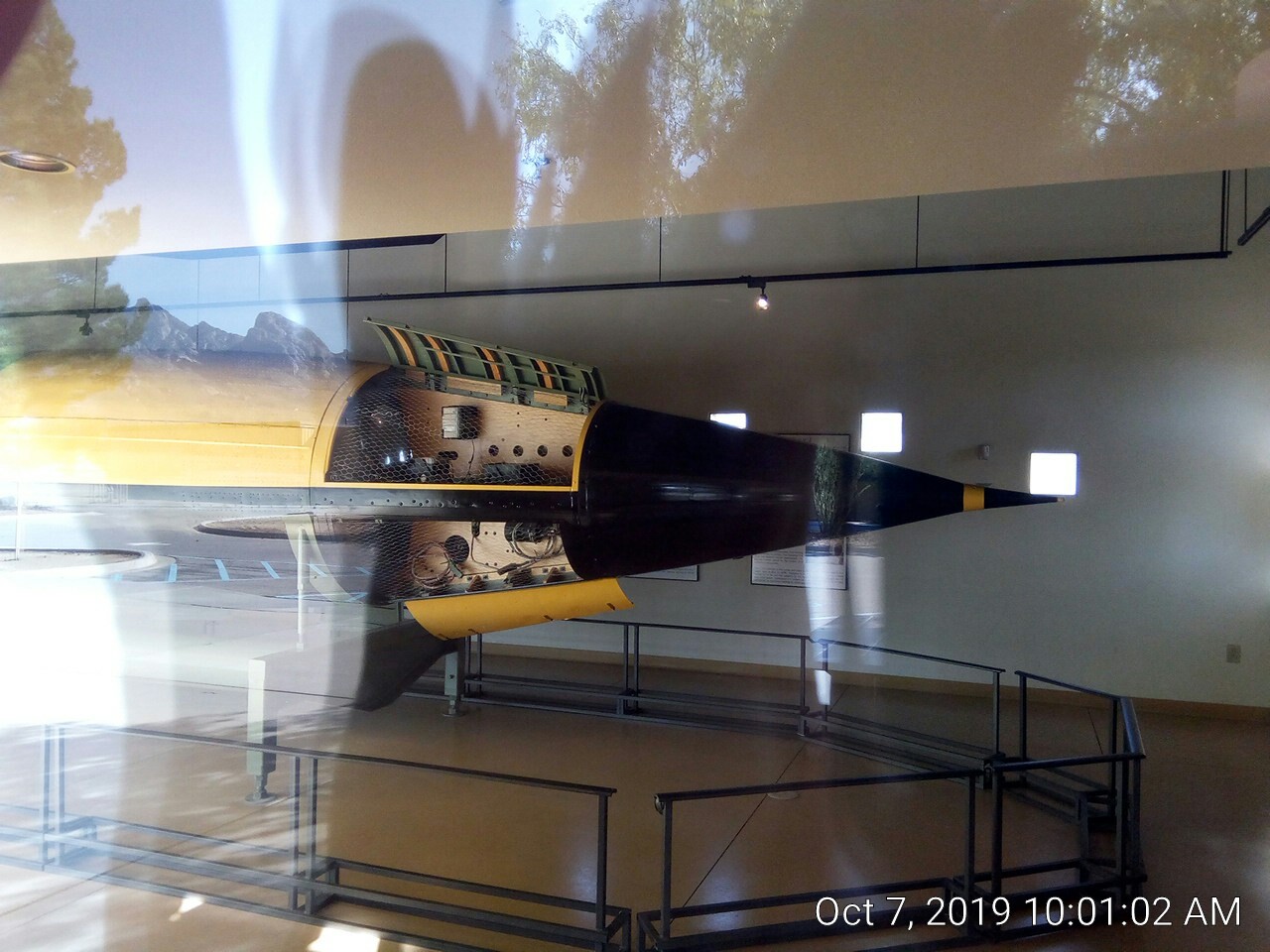 The wiring and operational devices were simple and mounted on plywood.  It’s amazing they figured out so much rocket science with crude .

There is a direct connection between the V-2, Herr Professor von Braun, the Redstone rocket program, the American space program, and the Pershing missile we will see later.  Braun lived in Ft. Bliss here in El Paso for the first part of his American career.  He was said to love the desert. 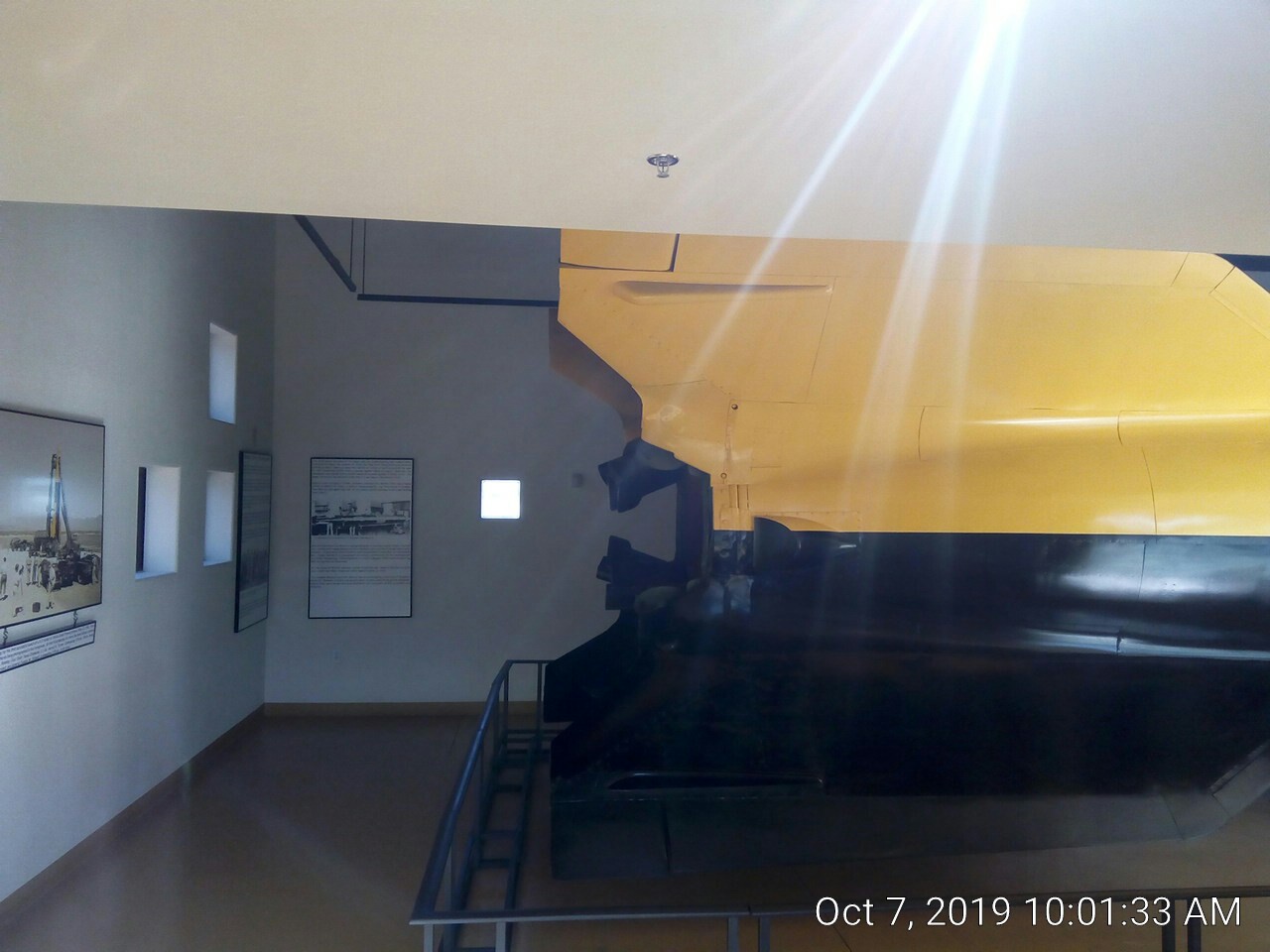 The position of the pics on the wall gives us a clue how big these things were.

The first exhibit in the missile park is the Pershing II, the system I worked with in the Army in [the former west] Germany from 1984-1988.  After so much secrecy, security clearances, razor wire, etc, it was weird to see one out in the open.  You can walk up to it and touch it; 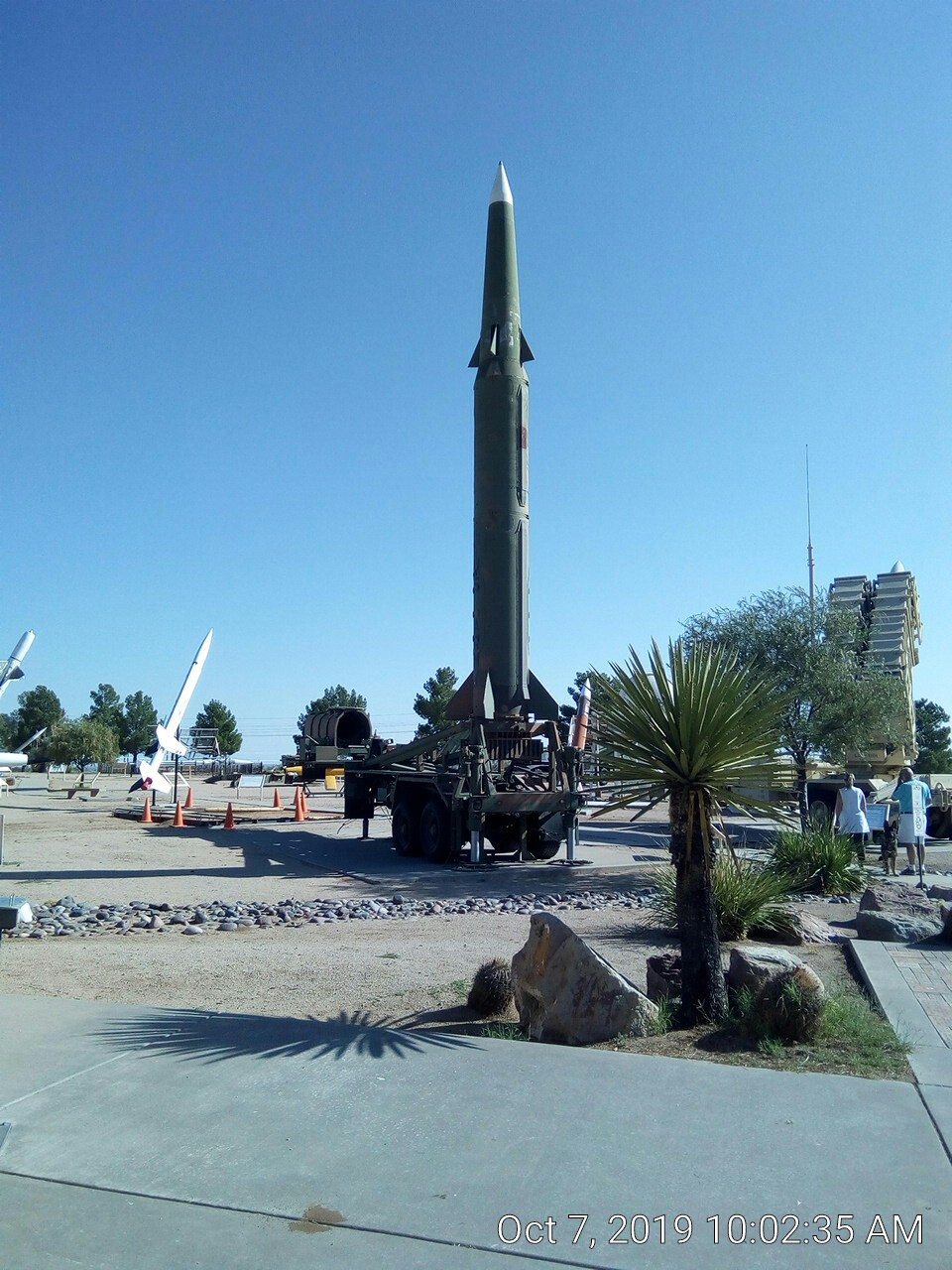 It’s also weird to see it standing (“erected”) with the warhead section mated to it.  At the time Soviet satellites would have been able to confirm the erected missile with the ‘head on it and wouldn’t have a choice but to start their own party.

As my enlistment was coming to an end, Reagan and Gorbachev signed the INF Treaty which outlawed our PII and the Soviet SS-20 units, primarily.  The treaty stood until earlier this year when a very stable genius pulled the US out of it.  Sometimes I get frustrated that Cold Warriors are invisible vets, and this withdrawal irritated me more than perhaps it should have.

Seeing the systems in such bad condition was disturbing in a way:  we’d spent endless hours prepping and maintaining them for their purpose.  Then I remembered they had been outdoors without maintenance for about 30 years.  It made me mindful how many humans were needed to keep such a thing operational. 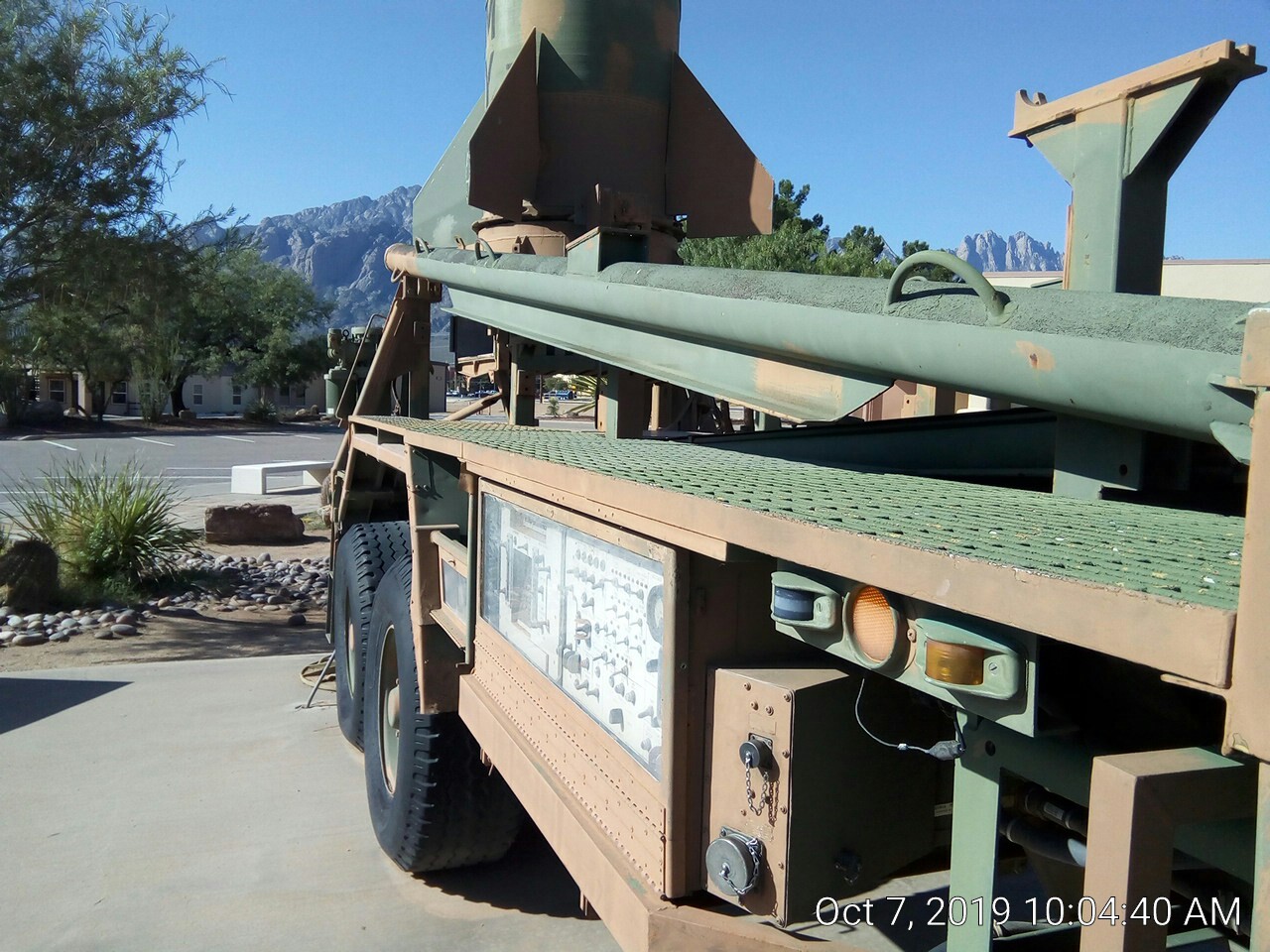 On the way out I tried to take a last pic but the sun was searing.  I hid the sun behind the RV (re-entry vehicle:  guidance and control, warhead, and radar sections) for the last shot: 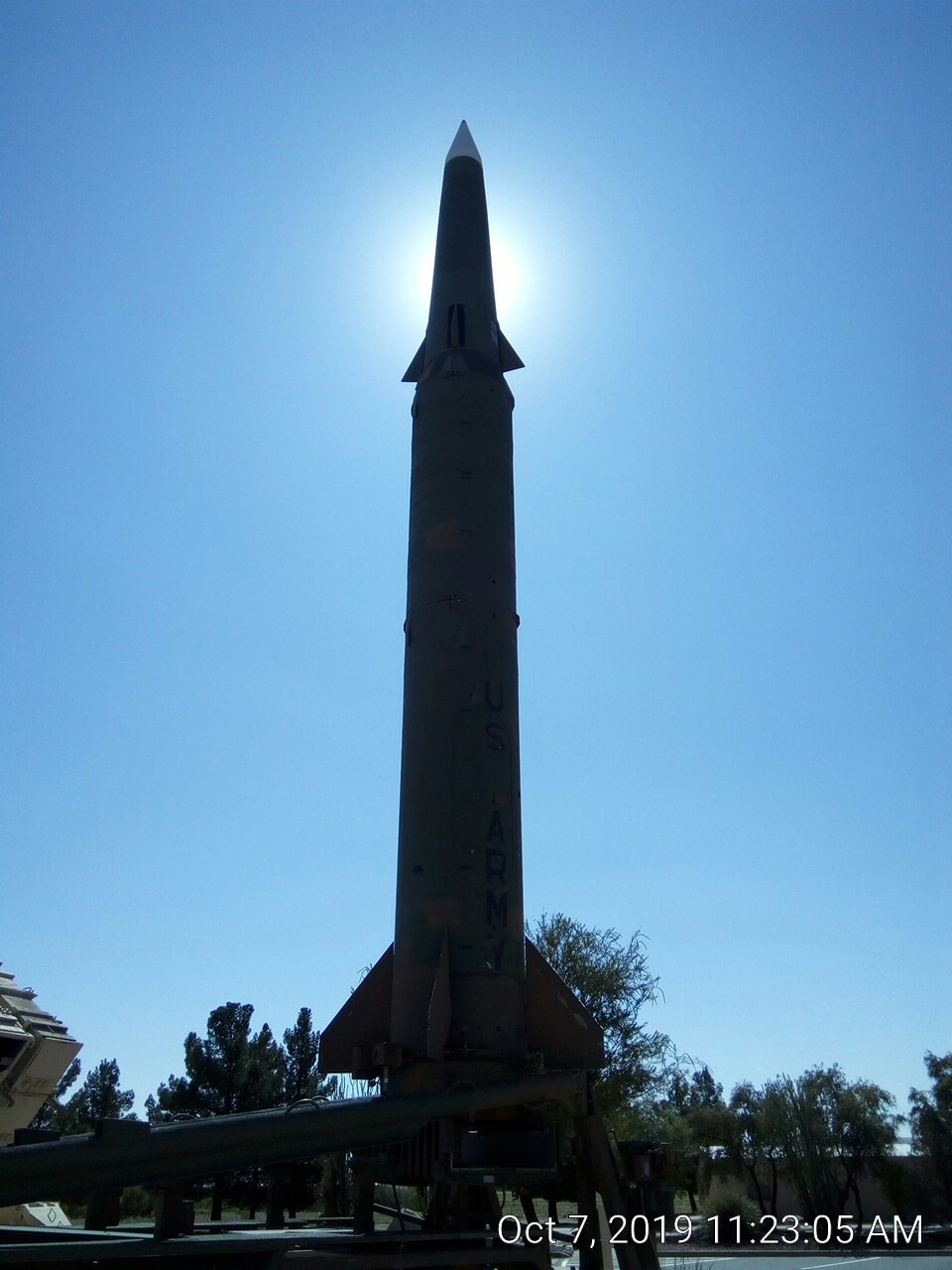 I wasn’t going for the effect, but viewing it later it does remind one a bit of the  “destroyer of worlds” quote.

I took lots of dorky pics of the other hardware out there.  It’s more a fascination with streamlined shapes and the science & engineering.  I am not amused by the destructive capabilities of some of these devices.

Example:  I’ve always thought the Nike Hercules was the foxiest shape ever put on a missile 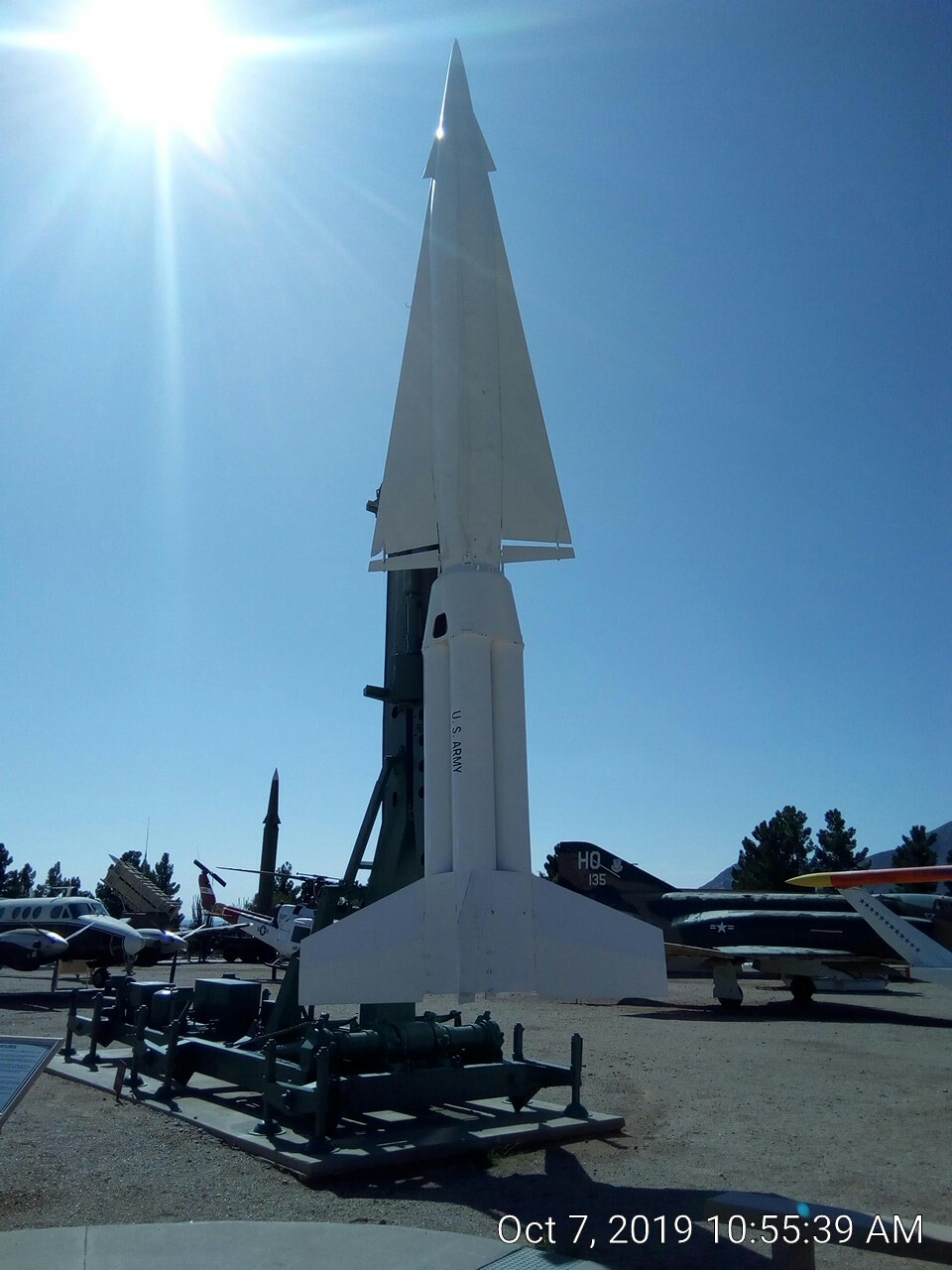 Can’t you just feel the yearning for modernity, progress, and defensive superiority?  An icon of modernity for both good and bad.

Background:  I find it offensive when folks tell others what to do, or attempt to convert them to some One True Gospel way of thinking.  I think it shows limited insight mixed with inflated sense of worth.  Awesome combination, right?

I was leaving the missle park and saw a fellow wearing a WSMR-related VOLUNTEER shirt talking to a couple who had just walked over to the V-2 exhibit.  I was hoping he was there to open the exhibit so I hung around.

After they left I started a conversation with him to see what he knew about the exhibit.  The talk kept turning in unexpected ways but wasn’t weird or anything.  It finally started making sense when I realized he wasn’t a volunteer there but was wearing an older VOLUNTEER shirt from an event that was held on base a few years back.

The gentleman was an Army retiree but was living a marginal lifestyle as he had been unable to get a handle on the ~$2000/mo officers’ pension.  He offered these specifics:

The fellow didn’t seem unstable, strung out, or otherwise unable to assess the situation.   I’ve seen many people live far better on far less income so I shared some experiences from the real life, the forums, etc:

"Some folks in similar situations have picked up used minivans, SUV, or cargo vans and adapted them for "car camping".  They're safe, out of the elements, can lock up their stuff, and aren't paying rent.  They can cook on a $20 camp stove and save a ton of money. Here's an example:  I was camping on BLM land outside Las Cruces and met a vet who was living on a $275/mo VA disability payment.  He had an old F-150 with a camper on the back.  It wasn't pretty but he was really happy. "

He didn’t express any interest in the topic so I didn’t push.   I did ask one question to see if he would make the connection:

How would your life be different if you weren't paying the motel $800/mo?

His face lit up and he talked about getting an F-150, getting a job, increasing the standard of living.   But no inkling that living in the motel wasn’t mandatory, that $800 would cover a truck payment/insurance, and that the truck could provide shelter.

I left it at that.  Maybe he’ll consider the idea later, or maybe he’ll barely keep his head above water.  His life, his choice.  I’m sure not going to tell him what to do.